Pumpkin and Chocolate Mousse Crepes – Easier than pumpkin or french silk pie, but every bit as delicious and infinitely more elegant! 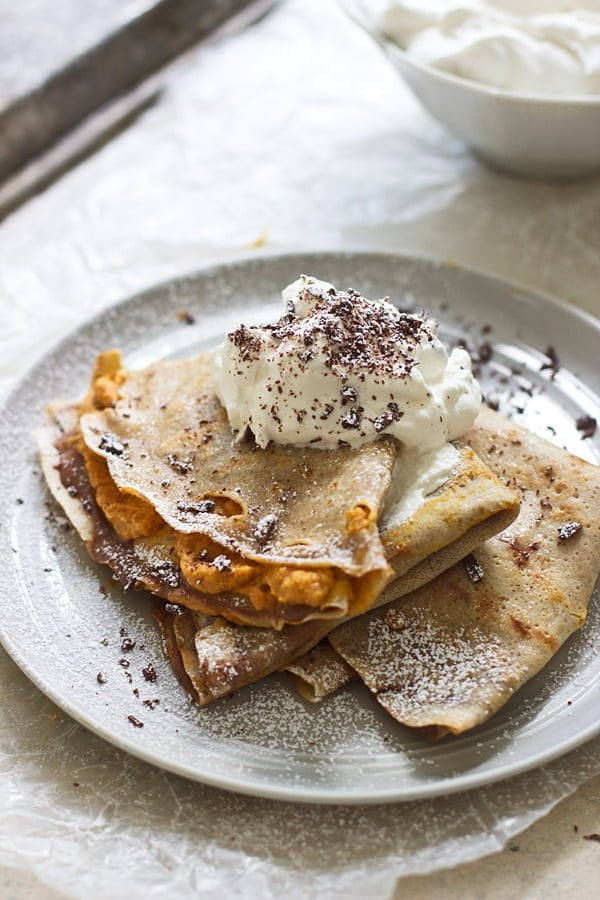 There are a lot of questions I get asked day in, day out when it comes to my food blogging career, but there are three that come about more than any others. Number one, do you really make money doing this? Two, what’s your favorite thing to cook? And three, do you ever have any complete and total failures in the kitchen?

The answer to the first one is long and boring, the second question is impossible to answer and the third honestly, is not really. If this were a baking blog, I’m sure there would be hundreds of failures, but since ninety percent of the material here is cooking and just sort of going with the flow, more often than not things just work. That’s not to say a recipe may need a little bit of tweaking here and there before it makes it on the site, but for the most part, almost everything that comes out of my kitchen is at least edible or fixable. 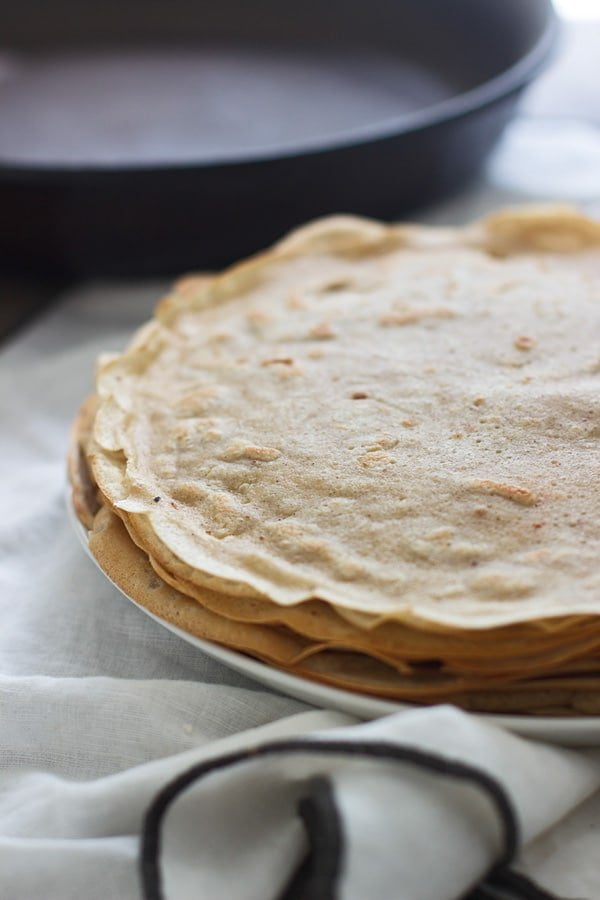 I’ve been doing my best to prolong the impending fall by refusing to start pumping out pumpkin, apple and all things cold-weather prematurely, but after a week of being tortured by pumpkin cake, apple streusels and soothing soups, I caved and starting brainstorming some pumpkin-inspired recipes.

After perusing some old ideas I jotted down last fall, but never made it to, I settled on an impressive inaugural pumpkin recipe – a layered pumpkin and chocolate mousse crepe cake. It would have endless pumpkin spice crepe layers alternating with fluffy pumpkin cream and luscious chocolate mousse. It would be topped off with a mountain of homemade whipped cream, chocolate shavings and powdered sugar. It.would.be.epic.

Instead, it was an epic failure. 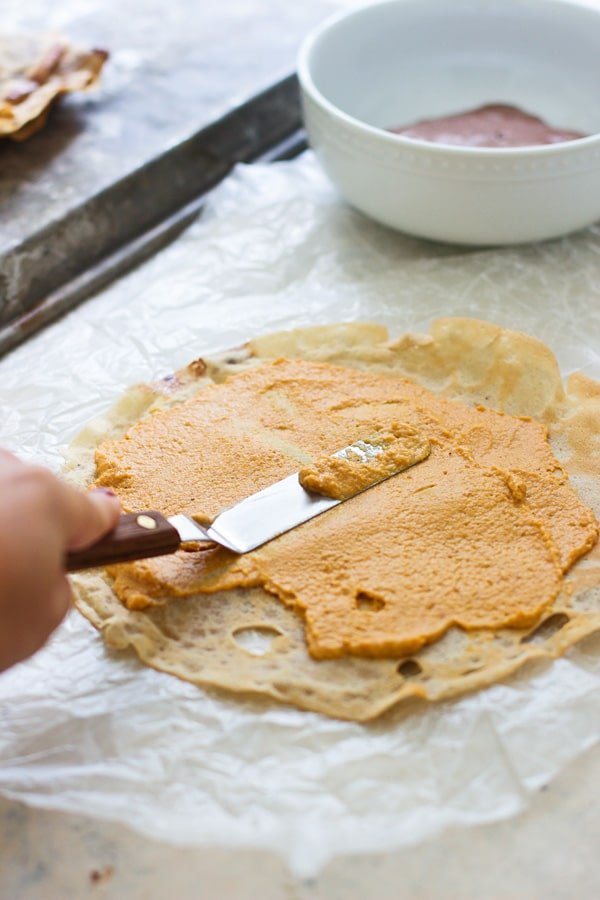 Everything was going swimmingly at first. I made my mousse filling – chocolate perfection. I made my crepes – perfectly thin and spicy. I made my pumpkin cream – fluffy, totally luscious, with just the right amount of pumpkin flavor.

I started to build my cake, and as I approached one of the last layers, I noticed that it seemed to be tilting just a bit, weird. I decided to ignore it and carry on, and before I knew what was happening, three-quarters of my crepe cake quickly slid off the bottom, off my platter and onto the table. Each layer separated and spread a mountain of pumpkin cream and chocolate mousse in different directions. I tried to catch the fall with my hands, which just made things worse, and extremely messy, not to mention practically ruined one of the only dresses that fits my growing belly these days. I had to admit defeat – my crepe cake was a lost cause. 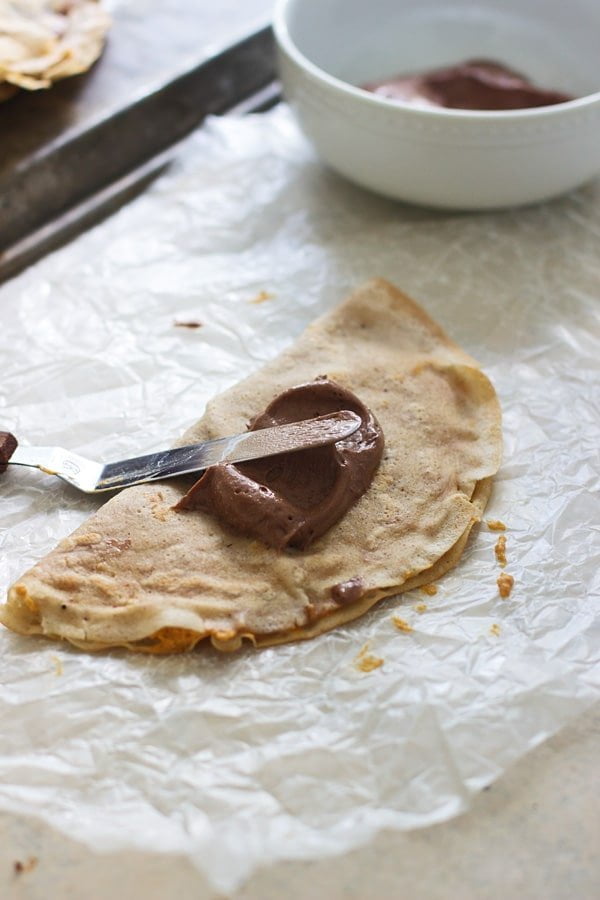 I took pity upon myself, hastily threw my cake in the trash, and retreated to the couch to drown my sorrows in a bag of Garlic Bread Lay’s. As I sat there, practically swallowing handfuls of chips, I thought about ways to salvage the cake. I had plenty of pumpkin and chocolate filling left, I also had a handful of crepes left, maybe I didn’t need to have an impressive crepe cake, maybe something simple was enough.

And these crepes were born… 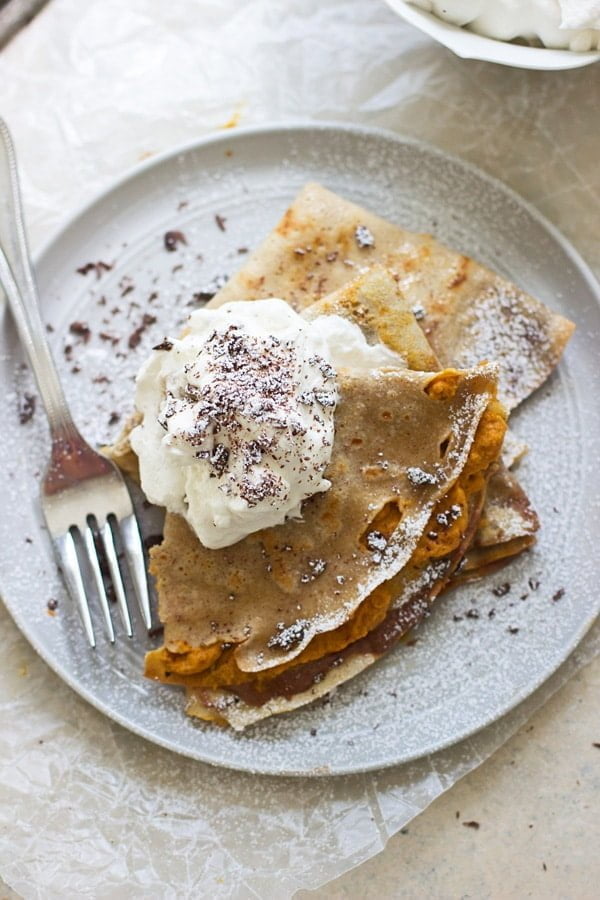 Instead of alternating towering layers of pumpkin and chocolate, I instead spread a generous layer of pumpkin cream on the surface of the crepe, folded it over once, and then spread the inside with the chocolate mousse. I folded it one last time, repeated for the other leftover crepes and then topped the trio off with homemade whipped cream, chocolate shavings and powdered sugar – just as I’d initially planned.

While the final product isn’t nearly as aesthetically impressive as my initial plan, the flavor is exactly the same, and that’s really what matters, right?? 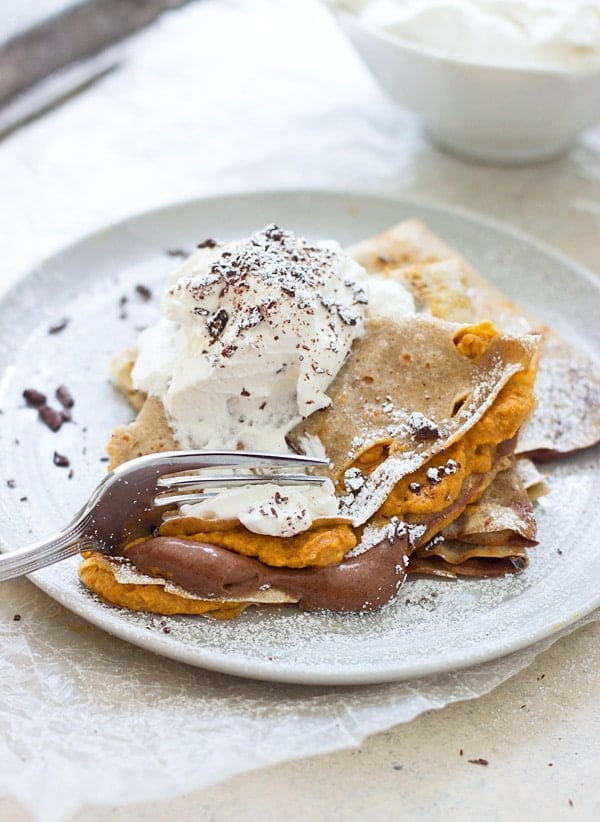