These Roasted Shishito Peppers with Soy Glaze are the perfect blend of sweet, spicy and savory. Each pepper is charred under the broiler, then tossed in an easy soy-based glaze, sesame seeds and a little bit of orange peel. The perfect snack! 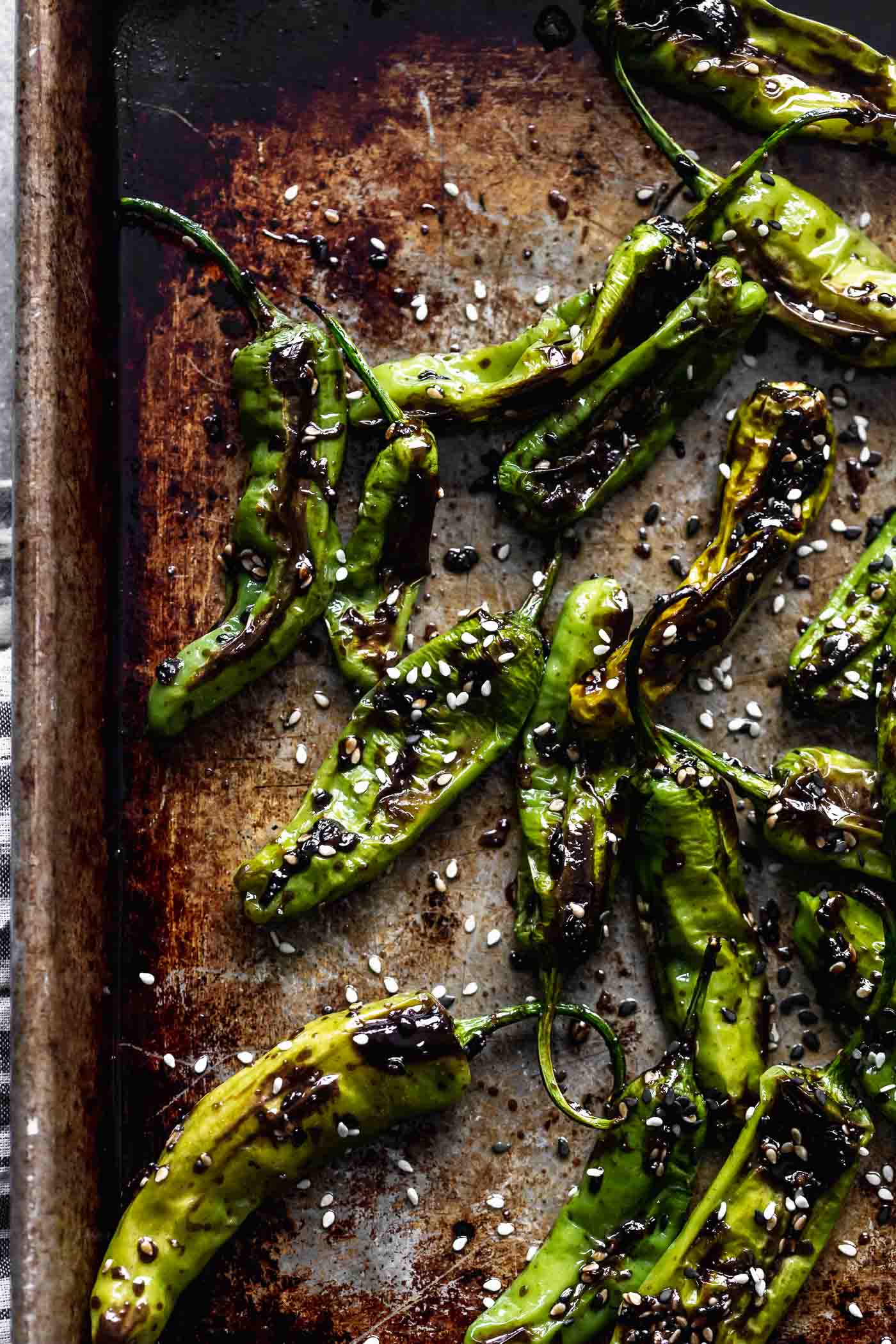 Can we please eat all the Blistered Shishito Peppers?!

Those petite green peppers are like little bursts of flavor – sweet, spicy, smoky – and I just can’t get enough of them. Especially when they’re tossed in a salty soy glaze, nutty sesame seeds and plenty of garlic. 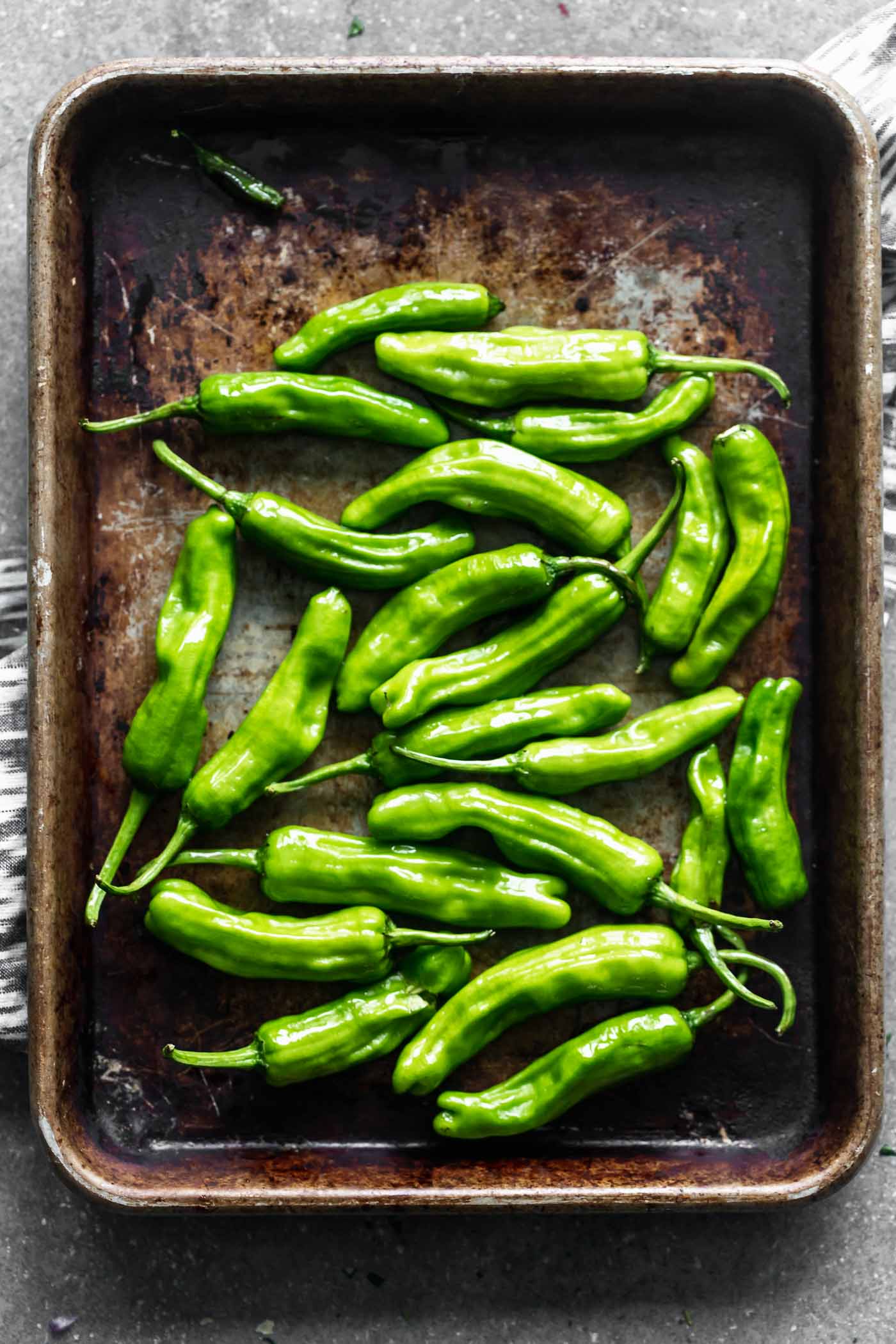 I, like the rest of the world, became obsessed with shishito peppers when they started gracing the appetizer section of every sushi menu on the planet, quickly becoming the new favorite over edamame. Eating them becomes even more exciting since only one of every six or seven peppers pack a spicy punch. It’s like the Russian roulette of the pepper world.

This particular batch only had one super spicy pepper, which was a little bit disappointing, so I had my handy bottle of sriracha on hand to jazz up the more mild guys a little bit. This is totally optional.

Another option would be to add in a few pinches of crushed red pepper flakes to the glaze, again, completely optional. 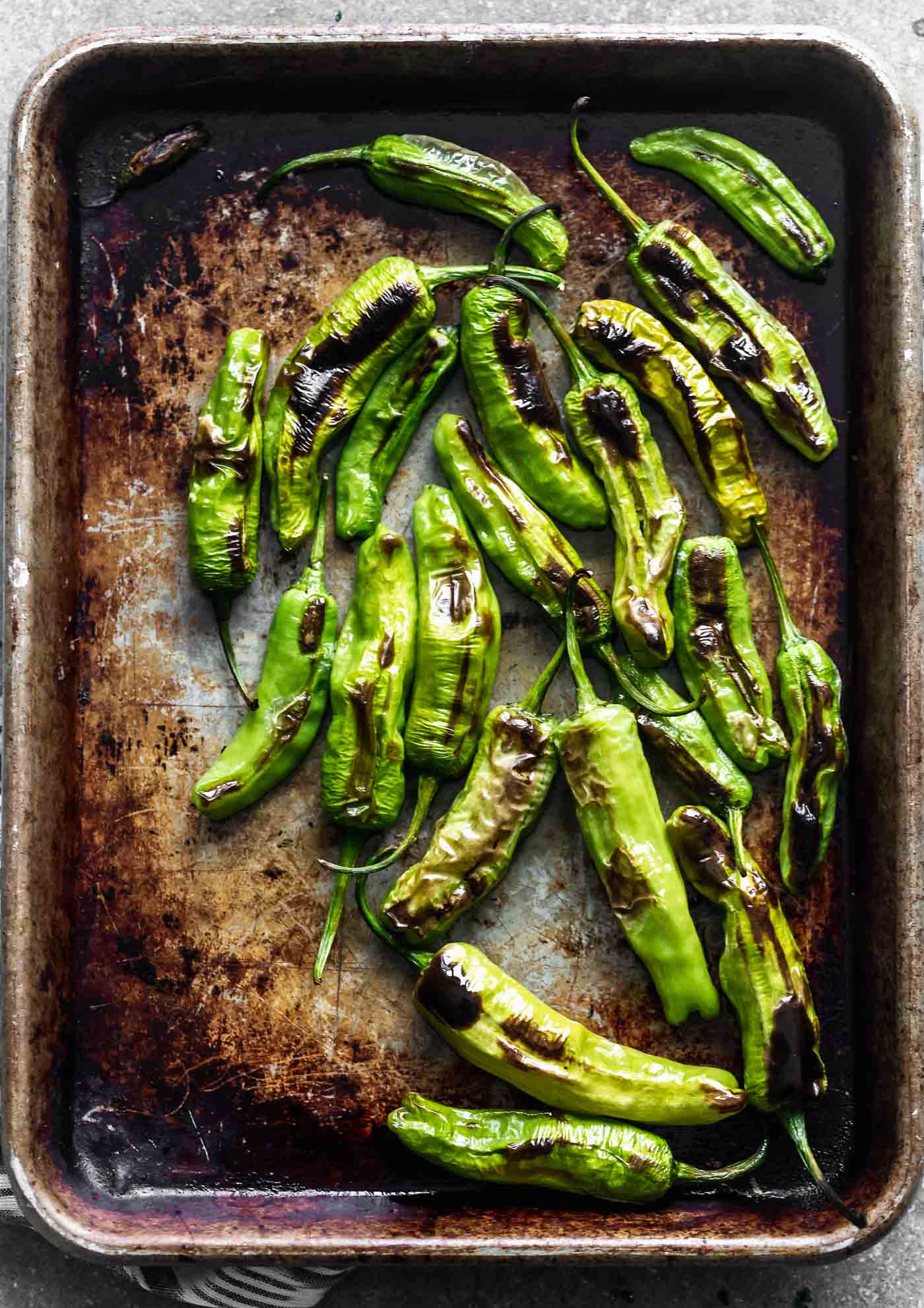 How to make blistered shishito peppers.

I think a lot of people are intimidated by cooking shishito peppers at home, but honestly they are probably one of the easiest things you can possibly make. In its simplest preparation, all you have to do is toss the peppers in a little bit of oil, spread them out on a baking sheet and let the broiler do all the work. Throw them in a bowl, season them with a little bit of salt, and dig in.

But, of course, our preparation isn’t THAT simple, because what fun would that be? Don’t fret though, this version is only slightly more involved. Pinky promise.

Everything stays the same, except while the peppers are cooking, you’re going to make a super quick glaze to toss them with after they come out of the oven all charred and hot. That’s it. 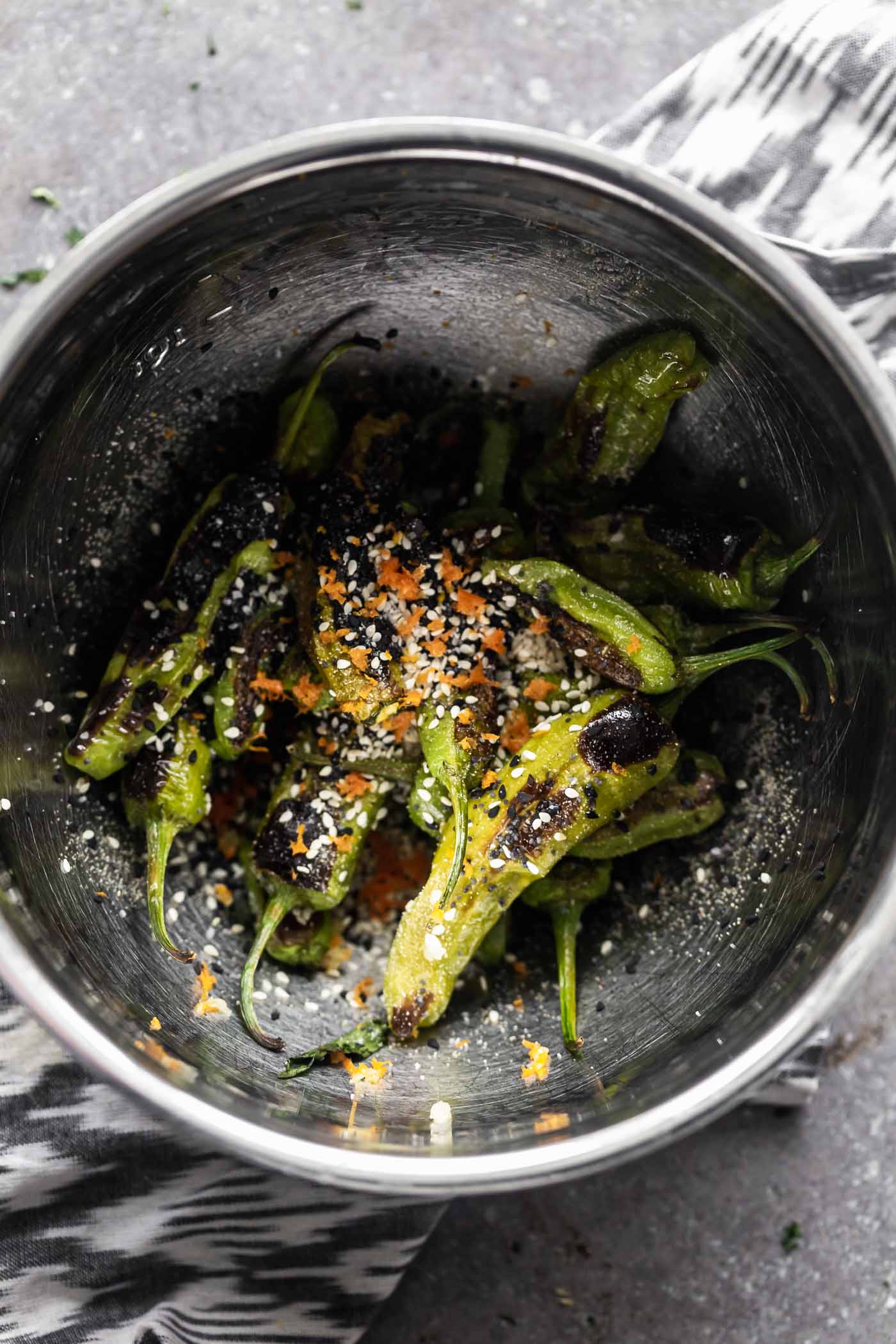 It’s not a short lineup, but all the ingredients are (mostly) staple pantry items, and if they aren’t for you, they’re easily accessible (and cheap!). All you do is whisk the soy sauce, sesame oil, garlic, sriracha, and brown sugar together in a small saucepan. Let it come to a simmer jut long enough for the garlic to cook. Then whisk in a slurry (slurry = a mix of cornstarch and water that thickens sauces) of cornstarch and water. Let the mixture thicken, then add in the orange peel.

Once the peppers come out of the oven, I toss them with sesame seeds, followed by the glaze and then watch them disappear in seconds.

Tips and Tricks for Blistered Shishito Peppers with Soy Glaze 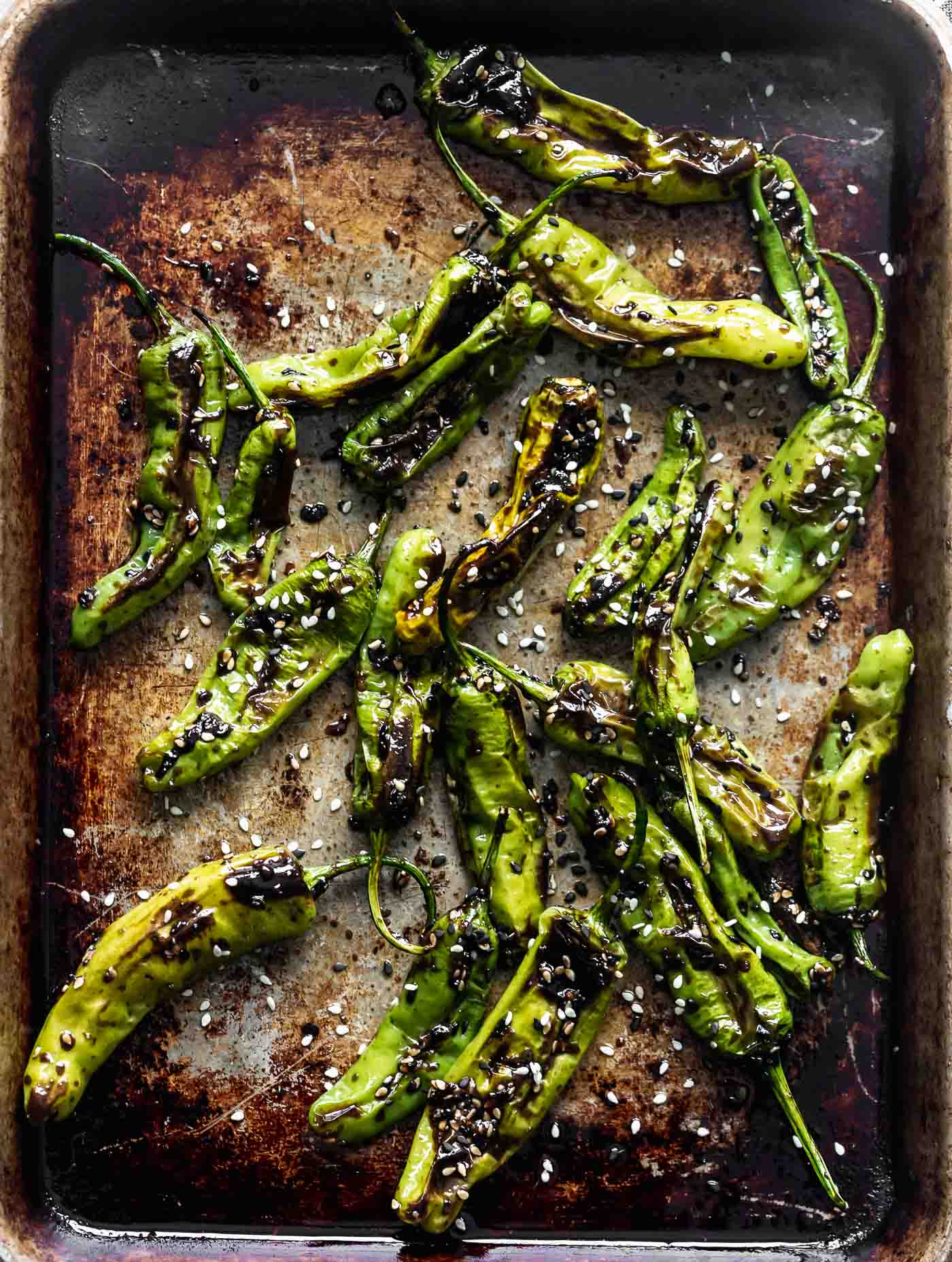 Print Rate Email
These Roasted Shishito Peppers with Soy Glaze are the perfect blend of sweet, spicy and savory. Each pepper is charred under the broiler, then tossed in an easy soy-based glaze, sesame seeds and a little bit of orange peel. The perfect snack!
Prevent your screen from going dark
2 people 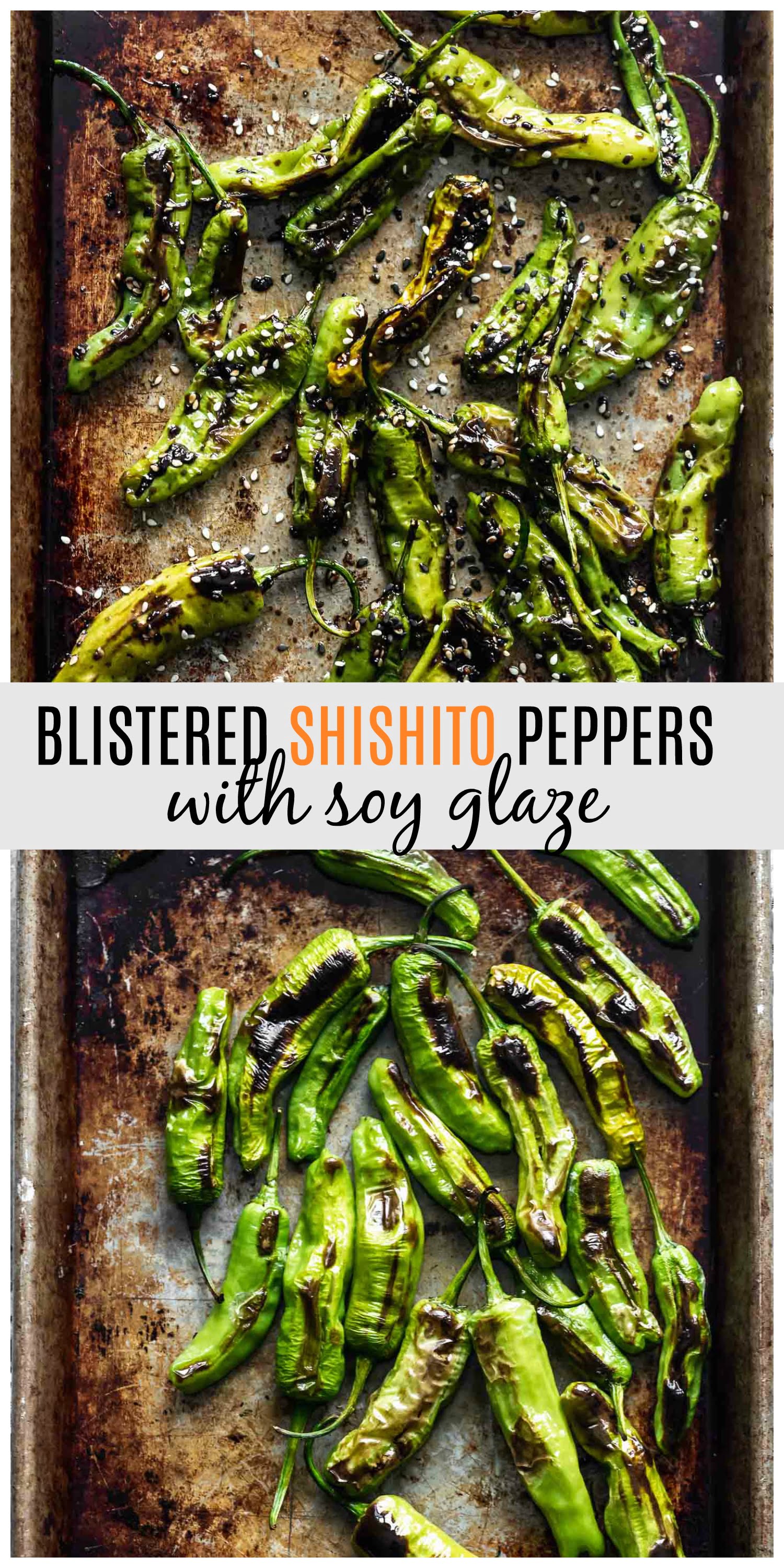