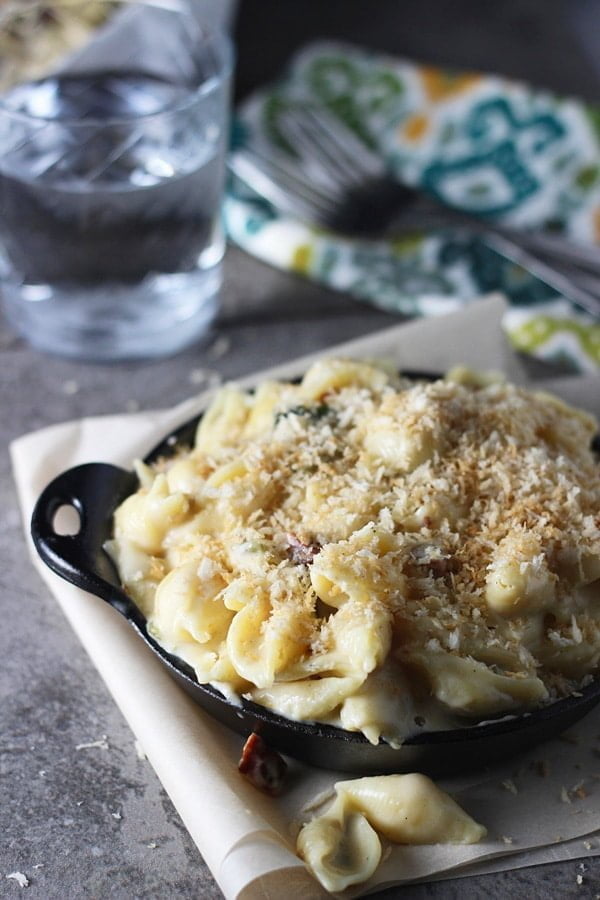 Welp, I’ve gone and done it.

I’ve created a recipe that combines my two favorite foods on the planet. Mac and cheese and Mexican. Somebody help me.

Except I guess Mexican isn’t really a food per se, and I, of all people know, you can’t just blanket all Mexican cuisine as e food in and of itself. There are tacos, enchiladas (my fav!), burritos, flautas, cheese dip, rice, chile rellenos, fajitas, carnitas – the list goes on and on. I love them all. 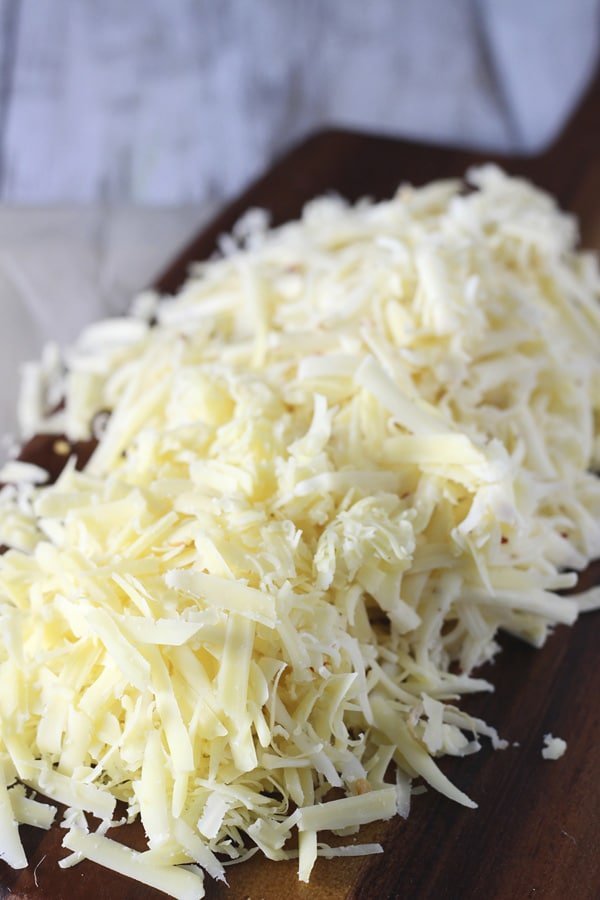 As I was saying… Somebody please help me.

Why did I make mac and cheese when I’m in the midst of a smoothie diet? Did I honestly believe I could just have a bite or two? Couldn’t I have at least done myself the courtesy to use whole-wheat pasta? Or low-fat milk? 2% cheese?

My stomach would hear nothing of the sort. 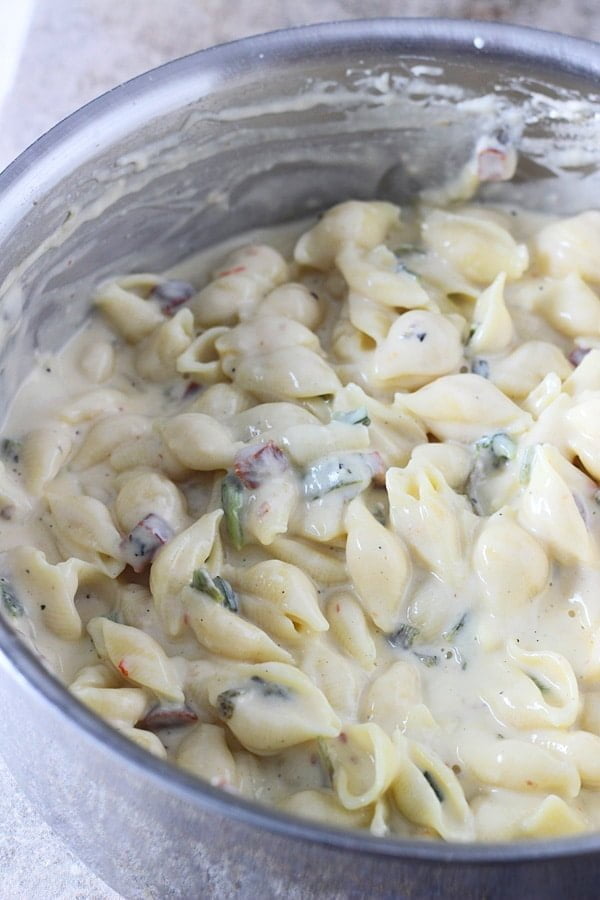 This mac and cheese seed was planted in my head a few months back when I spotted jalapeno cheddar cheese at the grocery store and knew it would be a perfect topping for this chicken tortilla soup. I’m normally a pepper jack girl, but after trying my first bite, I became a jalapeno cheddar covert, and immediately vowed to make a special mac and cheese to showcase it.

Jalapeno cheddar mac and cheese. Sounds good, but not quite right…

Jalapeno Cheddar Mac and Cheese with Chorizo and Roasted Poblano. I need another cheese…

Jalapeno Cheddar and Manchego Mac and Cheese with Chorizo and Roasted Poblano Peppers Yes! I need a topping though…

Pure perfection it is, although I’ve cut down the title a tiny bit for fear of forcing eyes to go cross when trying to read it.

Spicy Mac and Cheese with Chorizo and Roasted Poblano Peppers. Much better, yes? 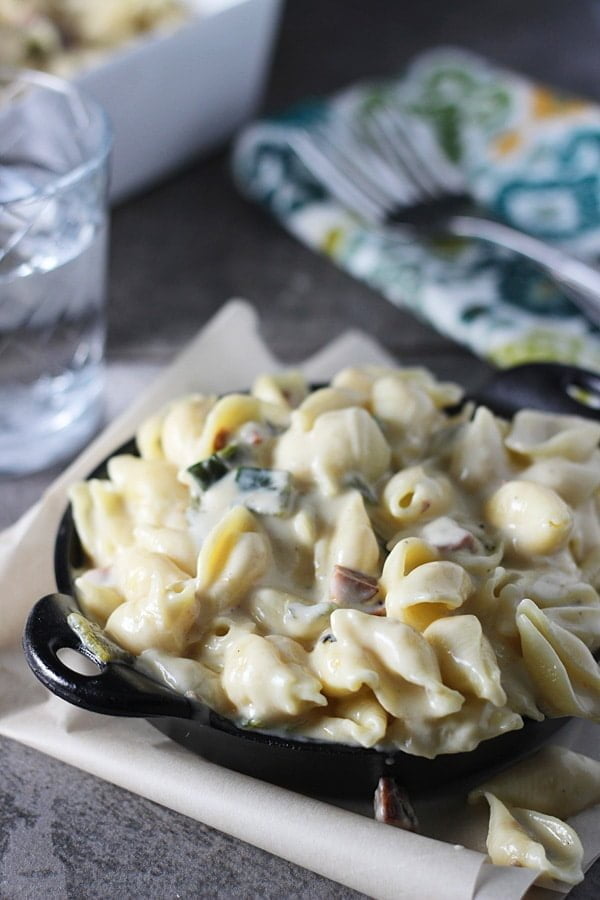 The chorizo is of the Spanish variety; you can find it at pretty much any grocery store, although mine came from World Market. Spanish chorizo varies from Mexican chorizo in that it’s a bit firmer in texture and is fully cooked, whereas a Mexican chorizo is soft, similar to bulk sausage and typically comes raw. If you’re in a pinch, or can’t find Spanish, Mexican chorizo would work, and be delicious, but just know, it will turn your whole mac and cheese a bright orange color – you might be into that, in this case, I wasn’t.

I’m not too terribly fond of mac and cheese that is baked for a long period of time, especially when only milk is used. I find that it becomes dry and loses that uber creamy and luxurious texture I love some much. Instead, most of the cooking is done on the stovetop and then the whole thing is popped under the broiler just long enough to toast the breadcrumbs. 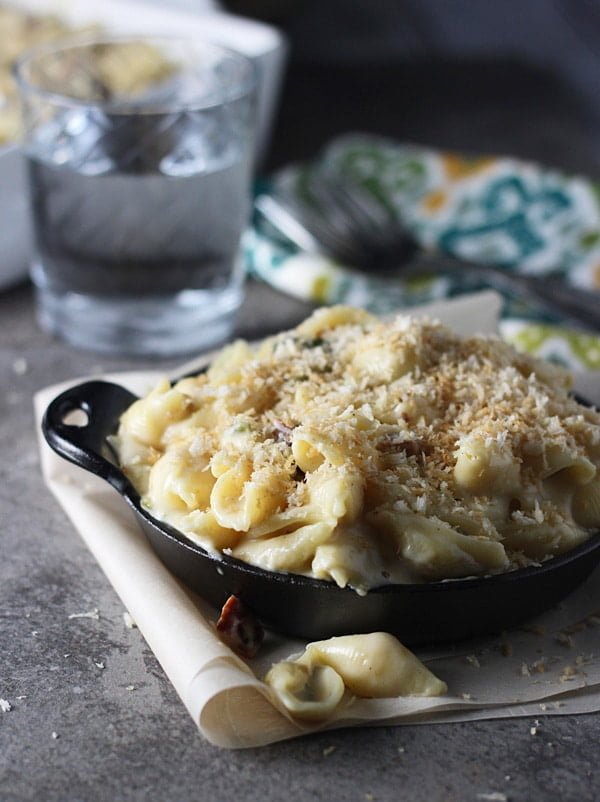 Spicy. Cheesy. Creamy. Carby. Three words, and one made up word I’m very fond of – and they describe this mac and cheese perfectly. 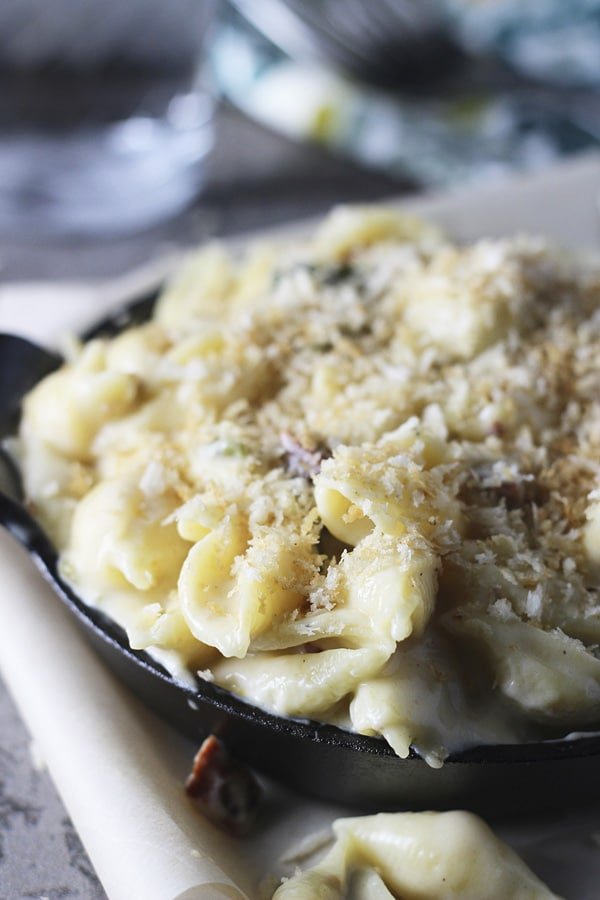