This Traditional Stuffing with Leeks and Sage is not only comforting, rich, and so delicious, it’s easy too! It’s packed with day-old bread, plenty of celery and onion, melted butter, and all the classic flavors of Thanksgiving. 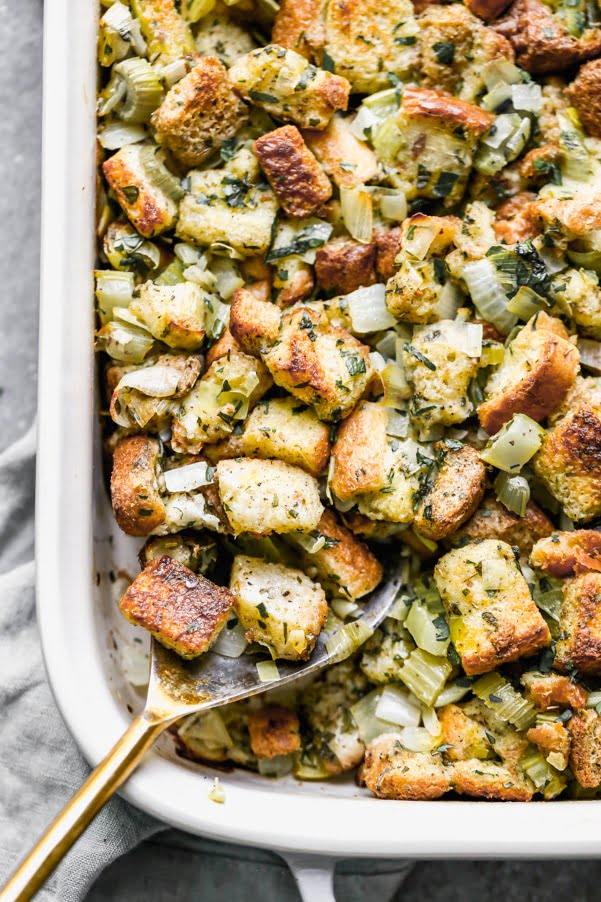 Traditional Stuffing with Leeks and Sage

Clearly, I’m all about those sides. I think we all are.

Stuffing, however, is the be all and end all of Thanksgiving sides. At least for me.

Over the years, I’ve fiddled with dozens of variations, and each November, I thrive on coming up with new creative ways to eat it. This year is different for a myriad of reasons, and in lieu of that, I want to keeps things simple and classic, which is exactly what this Traditional Stuffing with Leeks and Sage epitomizes. 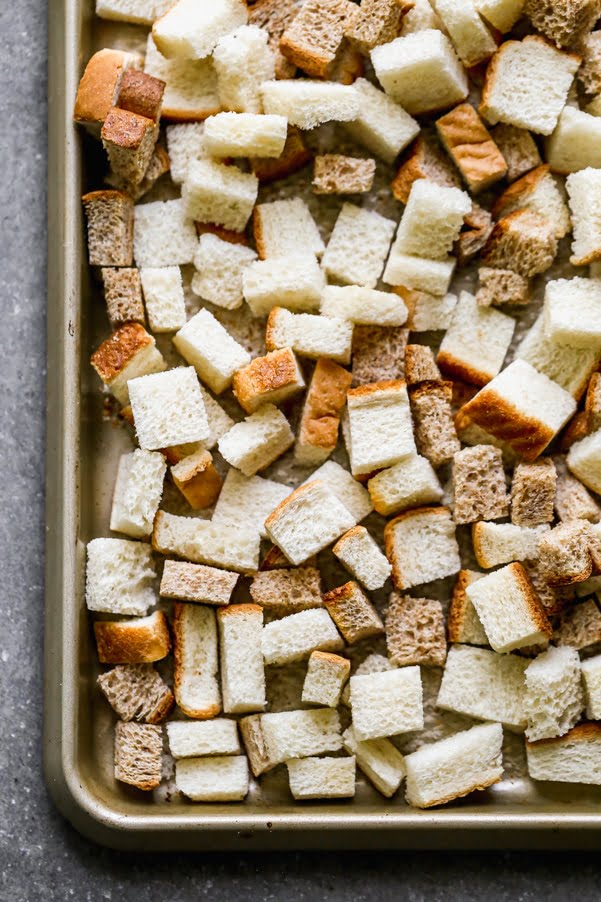 Ingredients in Traditional Stuffing with Leeks

There are SO many choices when it comes to bread for stuffing.

I mean really, you could use practically anything.  And as long as the bread is dry, it all works. I typically use a mixture of cornbread and ciabatta for this favorite stuffing recipe, but since we’re keeping things pretty classic today, I went with what I grew up with – plain white sandwich bread. Of course, if you want to class things up a bit, you can use retreat to a hearty ciabatta, Italian or French bread.

Onion and garlic, celery. These are the three ingredients you will find in pretty much every stuffing recipe on the planet. And there’s a reason, the combination of three, not only adds a lovely veggie factor, but it TASTES like thanksgiving.

Leeks. While our recipe is definitely traditional, we do veer a little off road with the additional of leeks. I love the subtle sweetness and extra boost of onion flavor they five the stuffing.

Herbs. My grandmother never used fresh sage or parsley in her stuffing recipe, and that’s shame, because the herb-forward flavor fresh sage and parsley bring to classic stuffing is perfect. For us, it’s a must, so I definitely recommend picking them up.

In addition to sage, my grandmother also always used poultry seasoning. If you’re not familiar, I’d describe poultry seasoning as a savory combination dried herb. It’s similar in taste to dried sage, but also has notes of marjoram, rosemary and garlic.

Butter. You know what elevates stuffing from a good to great status? Butter, and lots of it. It’s Thanksgiving guys, let’s overthink the butter aspect. You’ll need one stick, plus two tablespoons.

Eggs. Eggs are what bind a stuffing together, without them, you will just have soggy bread.

Chicken or turkey stock. Always use a low-sodium version, or even better, fresh. 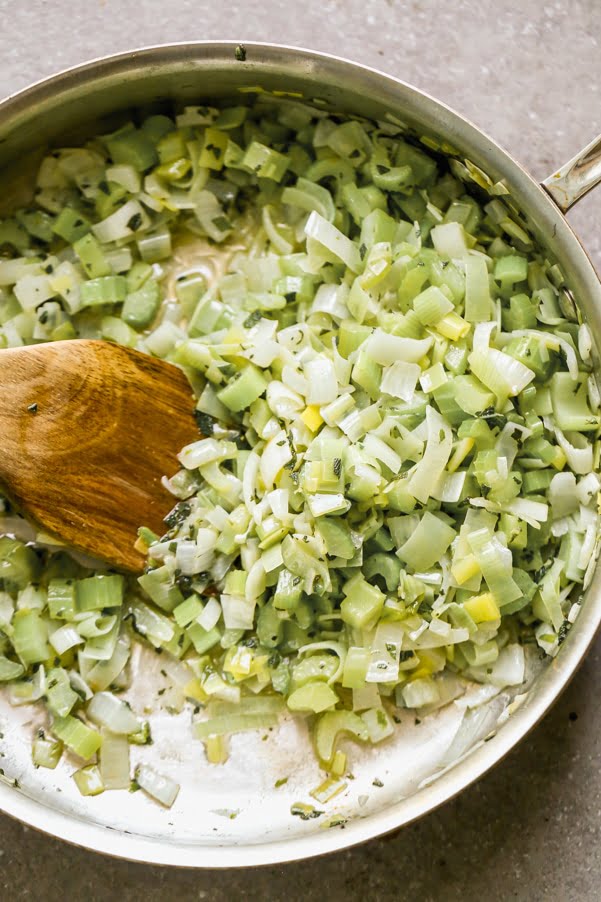 If I plan ahead, I cut my bread up in to a dice, and then let it set out overnight or longer. This is what you SHOULD do. However, if you live life by the seat of your pants as I often do, you can also cut the bread up into a small dice, toss it on a baking sheet and toast it in a 300-degree oven until the texture mimics day-old bread. It should take anywhere from 30-45 minutes. Make sure to toss a few time throughout the process.

I think this is different for everyone. According to tradition, stuffing is what you actually “stuff” in something. Here, it would be stuffing if you stuffed it into the cavity of the turkey. Dressing is baked in a casserole dish, so I guess technically, this is dressing. However, growing up, dressing was always much more moist and more of a soufflé texture. Stuffing was more bread-heavy, and crumbly, if that makes sense.

This, is about as classic as stuffing gets, so that’s what we’re calling it. 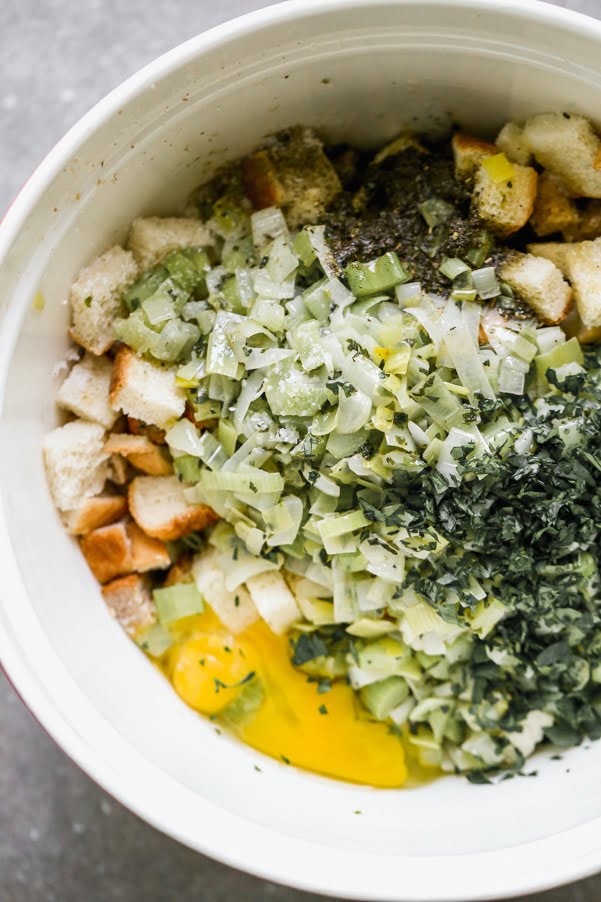 How to make Traditional Stuffing with Leeks and Sage 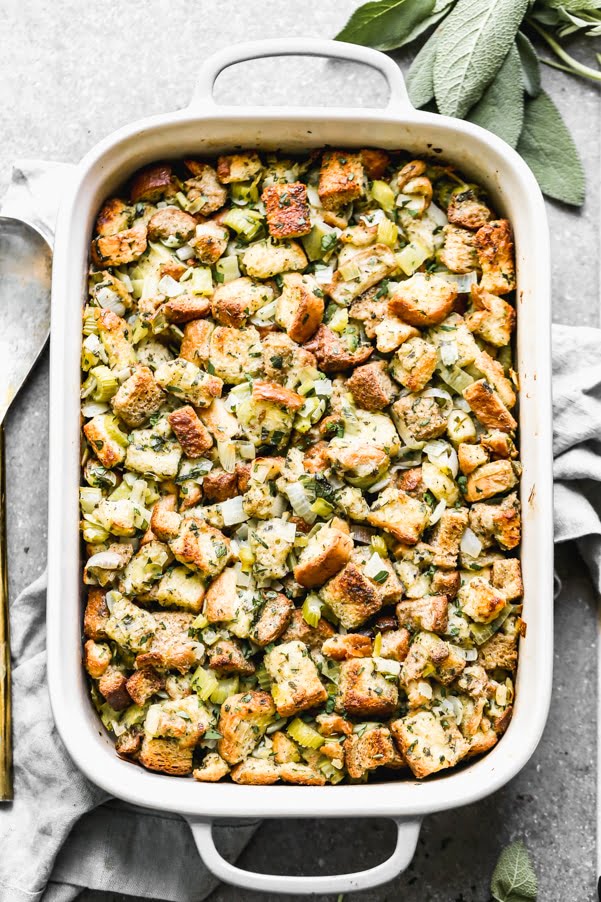 Print Rate Email
Traditional Stuffing with Leeks and Sage. Sage and leek give this classic stuffing a fresh update while staying true to classic flavors.
Prevent your screen from going dark
10 Serves 6