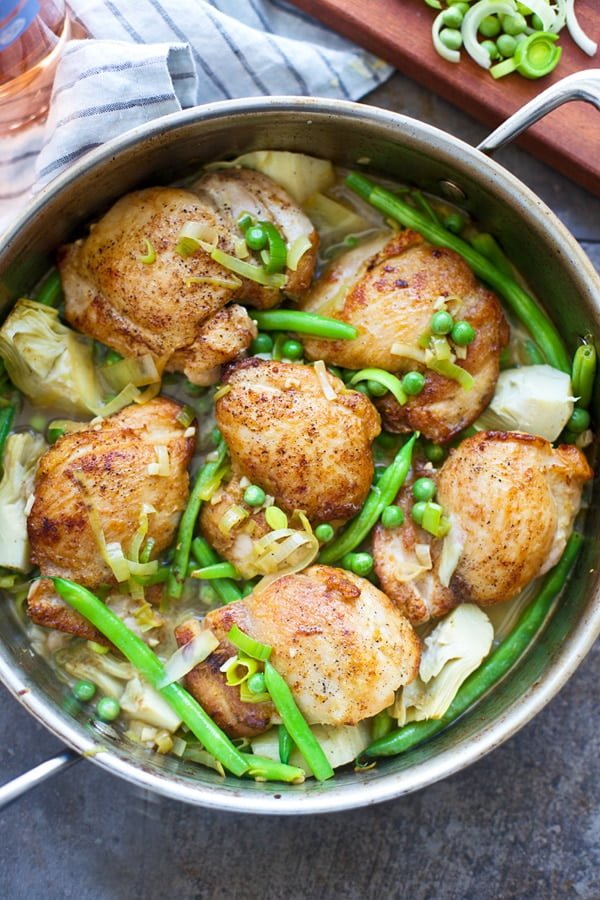 I just cannot get enough of all the bright, beautiful spring vegetables littering the grocery store produce section as of late. Each time I go I have to practice the ultimate restraint, otherwise I might leave with more vegetables than I can cook before they wilt and wither away. Right now the vegetable crisper in my fridge has asparagus, shelled English peas, whole artichokes, leeks, crisp green beans and the prettiest heirloom carrots I’ve ever seen. I don’t know what I’m going to do with all of them yet, but we’re well on our way to utilizing all of them as a handful were put to good use in today’s spring-inspired coq au vin – a dish I like to call spring chicken.

While not classically coq au vin, this follows a similar process and ingredients that are reflective of this new season we’re in. Instead of using a heavy red as the braising liquid, I swapped it out for a light, dry rosé, a wine that to me, is basically spring and summer in a bottle. Instead of starting with a base of onion and garlic, I used their sweeter, milder cousin, the leek, a vegetable I can’t get enough of this time of year. Also, instead of hearty mushrooms, I threw in fresh green beans (or haricot verts), English peas and quartered artichokes as the veggie component. 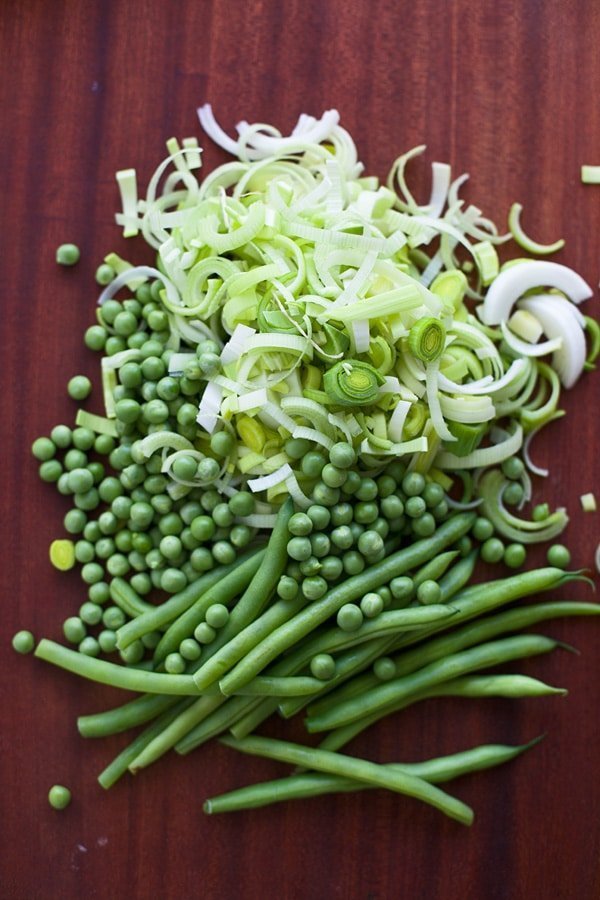 I had originally planned on using bone-in, skin-on chicken thighs, as most coq au vin recipes call for, but I really wanted this to not only be a quick-cooking dish, but a relatively healthy one as well. It was the first time I’ve used a boneless, skinless thigh in a braising situation, and I really thought I’d miss that crispy skin, but I was pleasantly surprised that even without the skin, the chicken became irresistibly crispy and golden brown after a quick sear in a hot a pan – with butter of course.

The key is to liberally season the flesh, cook it in a screaming hot pan with butter, and to leave it alone once it hits the fat. Like a lot of meats and seafood, the flesh of the chicken will release once it’s perfectly golden brown, so if you try to flip it and it won’t budge, it means it’s not quite there yet. 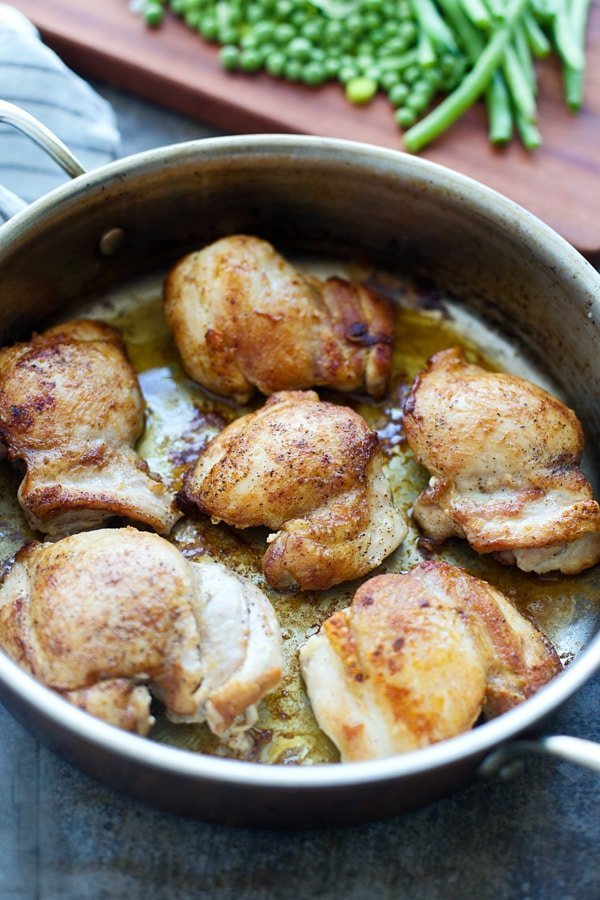 Once the chicken has browned on both sides, it comes out, the leeks go in, are sautéed until soft, and then the garlic and cut green beans are tossed in as well. Once the green beans start to perk up, the wine is added in, reduced and the chicken goes back in along with some stock, the quartered artichokes and the peas. Everything simmers for another 10 minutes or so until the chicken is done cooking, and it’s ready to serve.

This would be lovely served over mashed potatoes, but seeing as we’re trying to keep things ultra light, I’d love to see this nestled on top of some whipped cauliflower. Also, if you want the brasing liquid to be a little bit thicker, before you add the chicken stock in, mix a little bit it with a tablespoon of flour, then whisk it in, along with the rest of the stock, to the wine and vegetables.

Spring at its finest. 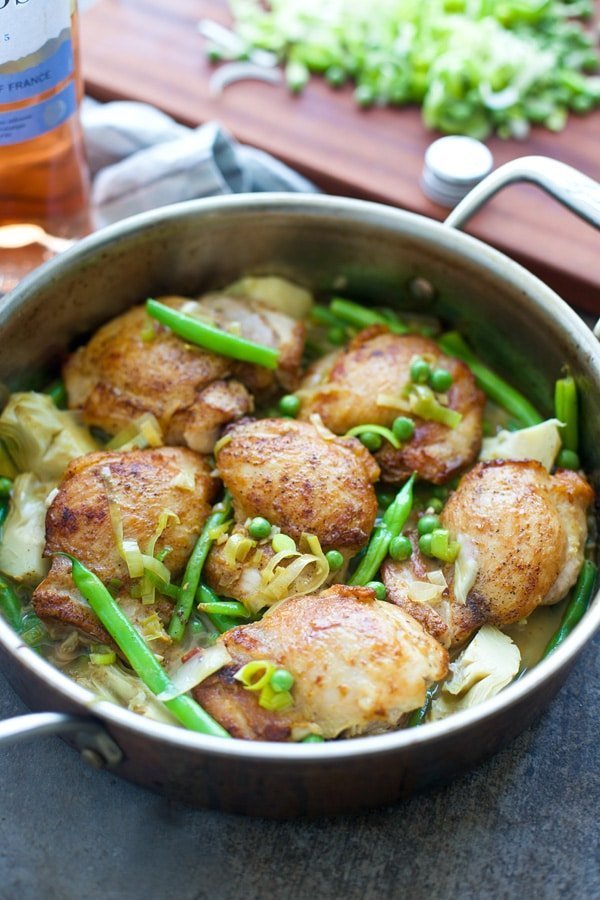 5.0 from 1 reviews
Spring Coq Au Vin (Spring Chicken)
Print
Prep time
10 mins
Cook time
30 mins
Total time
40 mins
Author: Cooking for Keeps
Serves: Serves 4
Ingredients
Instructions
Notes
If you want the braising liquid a little bit thicker. Whisk one tablespoon of flour to ¼ cup of the chicken stock before you add it to the wine and veggies. Add the remaining chicken stock to the pan with the veggies, and then slowly whisk in the chicken stock with the flour. This will help the sauce become thicker.
3.3.3077