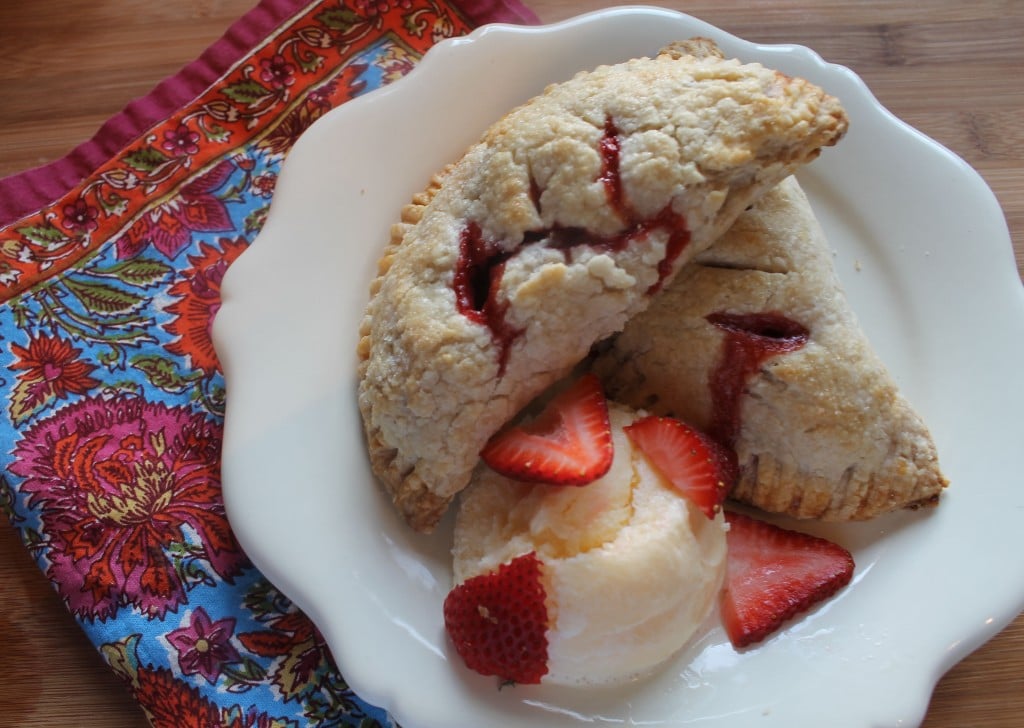 Do you ever have one of those days where all you can think about is consuming a certain something to make you feel better?

Are you ever on a mission to cook something that has to be made NOW?!

Well both of those thing happened to me a while ago, and actually happens quite often. I think of something I want and have to have it that very instant or at least a few labor intensive hours later.

In this particular instance, I was bound and determined to make Strawberry and Rhubarb Pie.  I don’t know where it came from but by god, I was going to get that pie.

I made my list, feeling excited and eager to start.  I ran over to the grocery store with determination on my face, whizzing down the isles, snapping everything up on my list in record time.

“What a great grocery trip!” I thought.

As I was pondering which check out line looked to be moving the fastest (I always pick the longest one of course) I realized that I had snapped everything but one crucial item; Rhubarb. Of course, it was absolutely no where in sight. After scouring the produce section again and harassing the employees to look in the back, because I just knew they were hiding it from me back there, and after calling FIVE different grocery stores to no avail, I conceded and accepted the fact that I was not going to be making Strawberry Rhubarb Pie that day.

I did the next best thing and bought a pre-made pie which was not nearly as satisfying or tasty as I had pictured in my head. Sigh. Another day I guess.

Imagine my excitement when I went to the same grocery store last week and lo and behold; beautiful, vibrant, red rhubarb is staring me dead in the face.  Of course, at that moment I had to snatch it up along with the super cheap and in season strawberries, and whip up what I had longed for before.

I decided to go against making a whole pie and instead make cute little hand pies. Because, who doesn’t love something individual and miniature?  Or is it that just me?

Anyways, these turned out so good that they are going to be added on to my rotation of desserts. Flaky and slightly sweet dough are the perfect little pouch for the sweet and sour filling of rhubarb and strawberries. Wrap them in parchment paper and bring to picnics, barbeques or even as a little devilish mid-day snack at work. 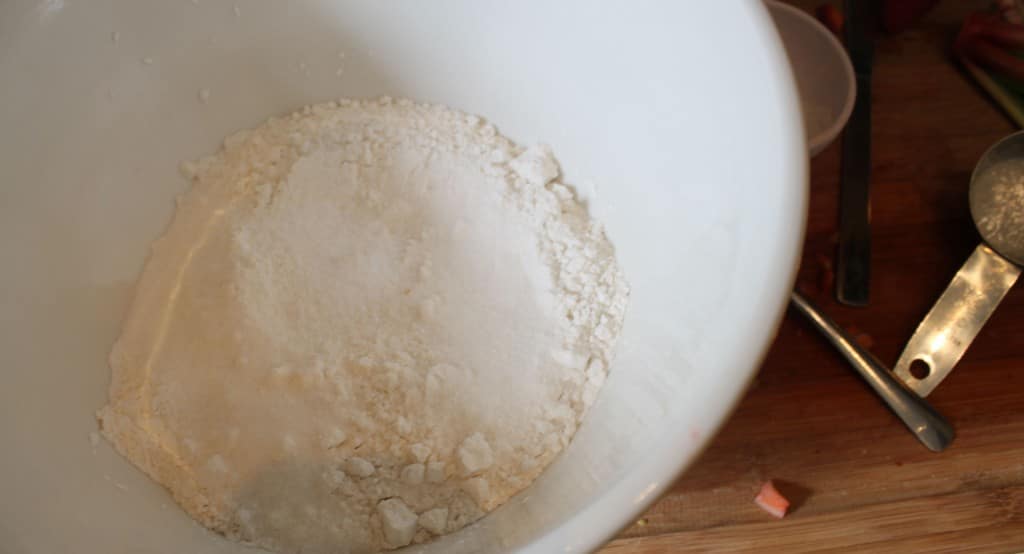 Start by making your crust.  In a bowl combine flour, sugar, and salt. 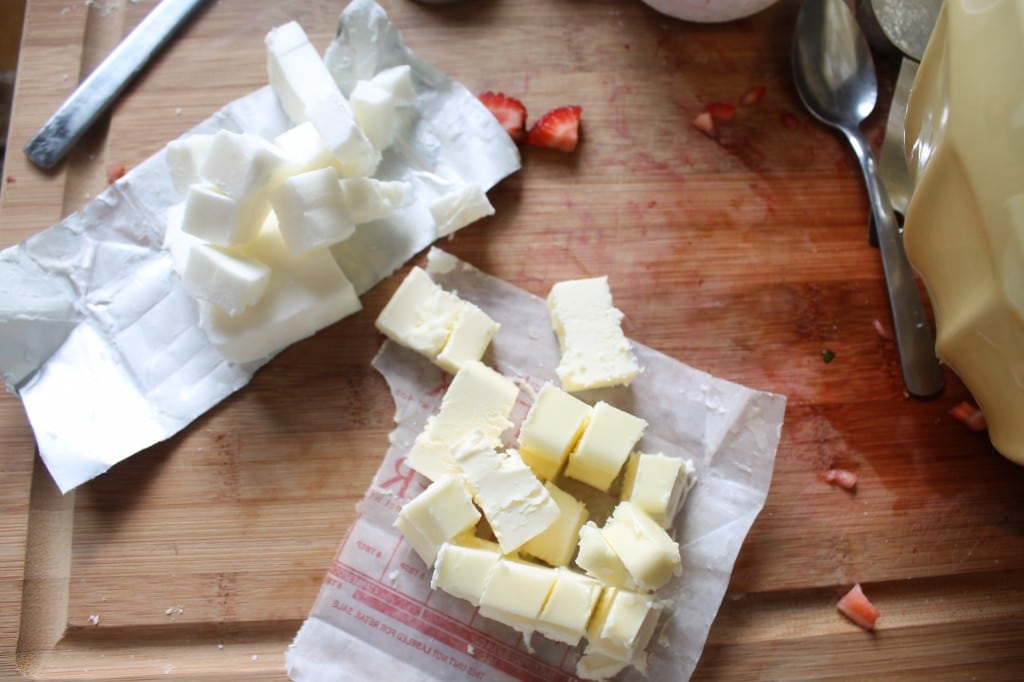 Cube COLD butter and shortening. Work quickly! The colder the butter stays the flakier your crust will be. 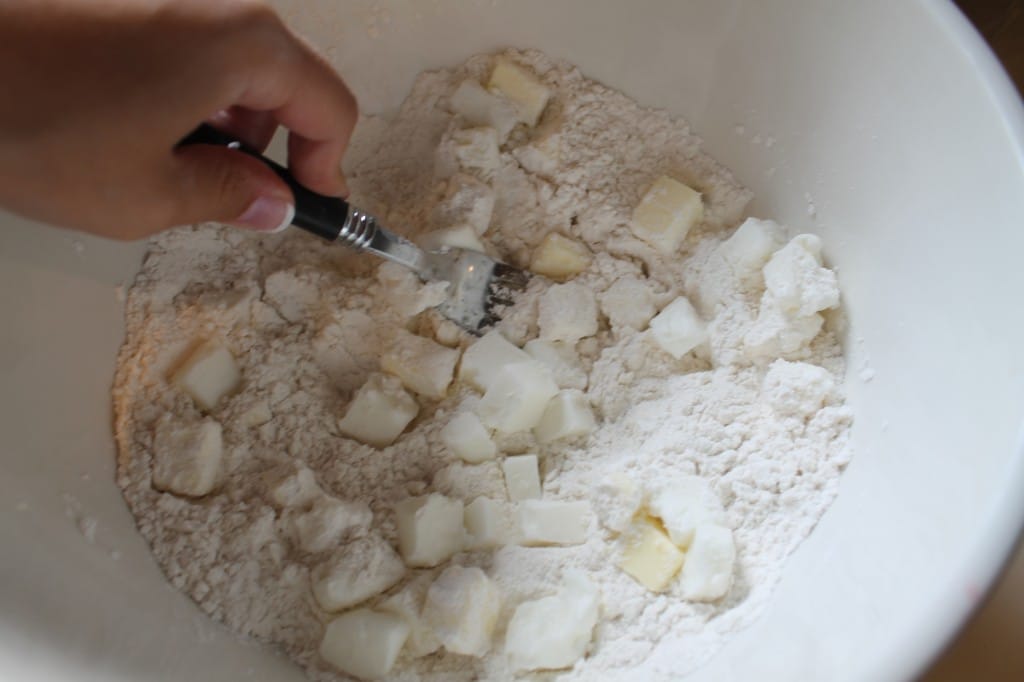 Using a fork cut the shortening and butter into the flour mixture. 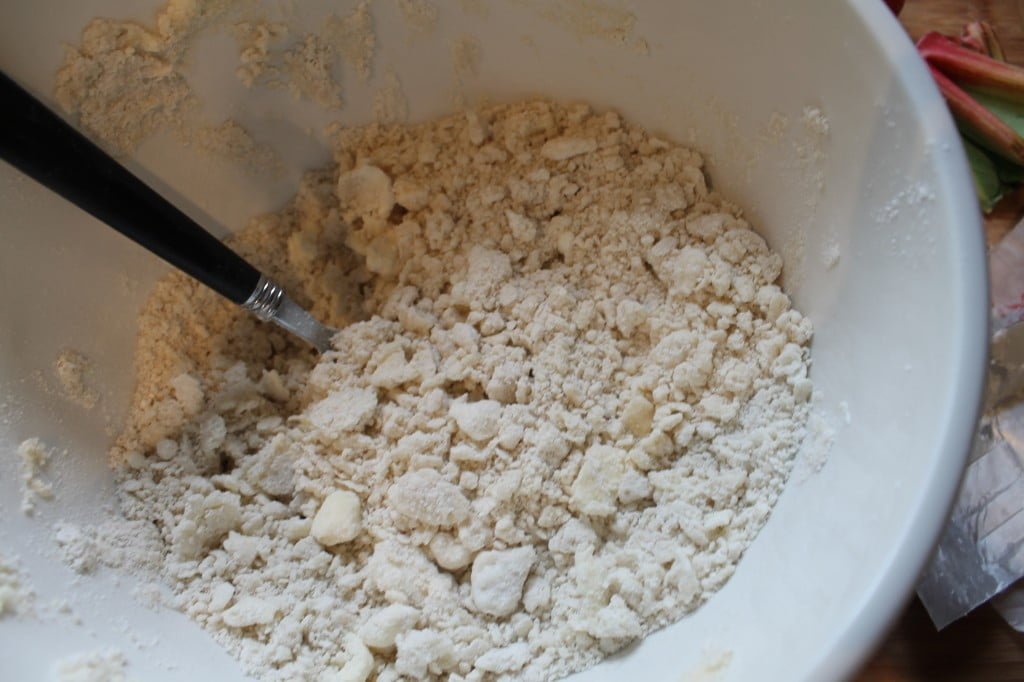 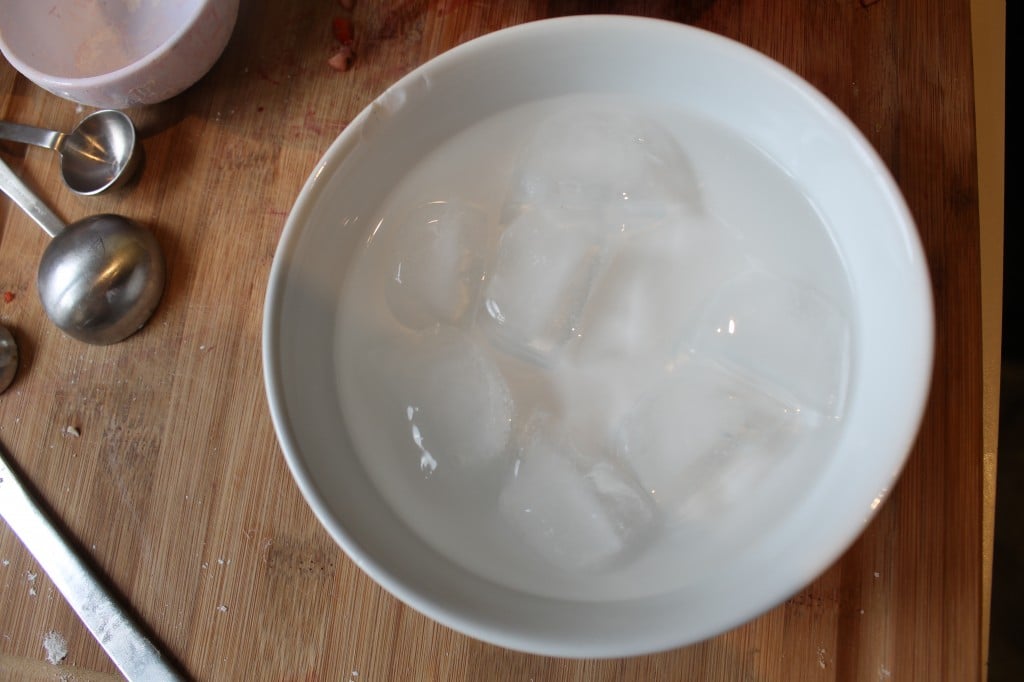 Fill a bowl with ice water. Add three tablespoons of the ice water to the mixture. If it doesn’t come together, add more water one tablespoon at a time until the dough can be formed into a ball. The mixture will still be a little crumbly. 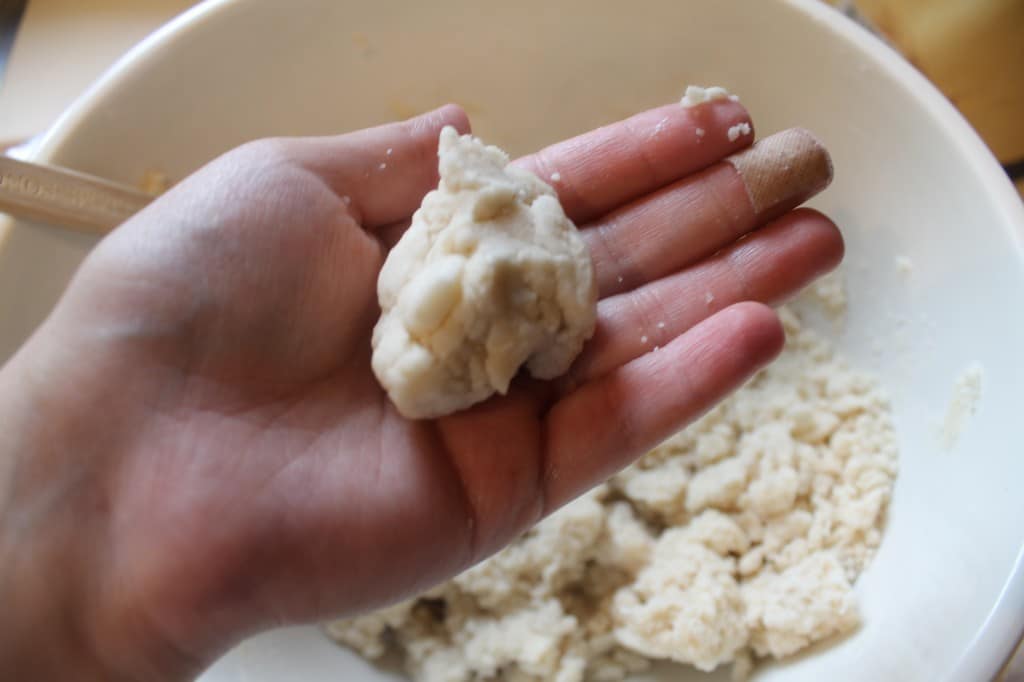 This is what the dough should look like. As you can see it comes together in a ball but the mixture below it is still pretty crumbly. 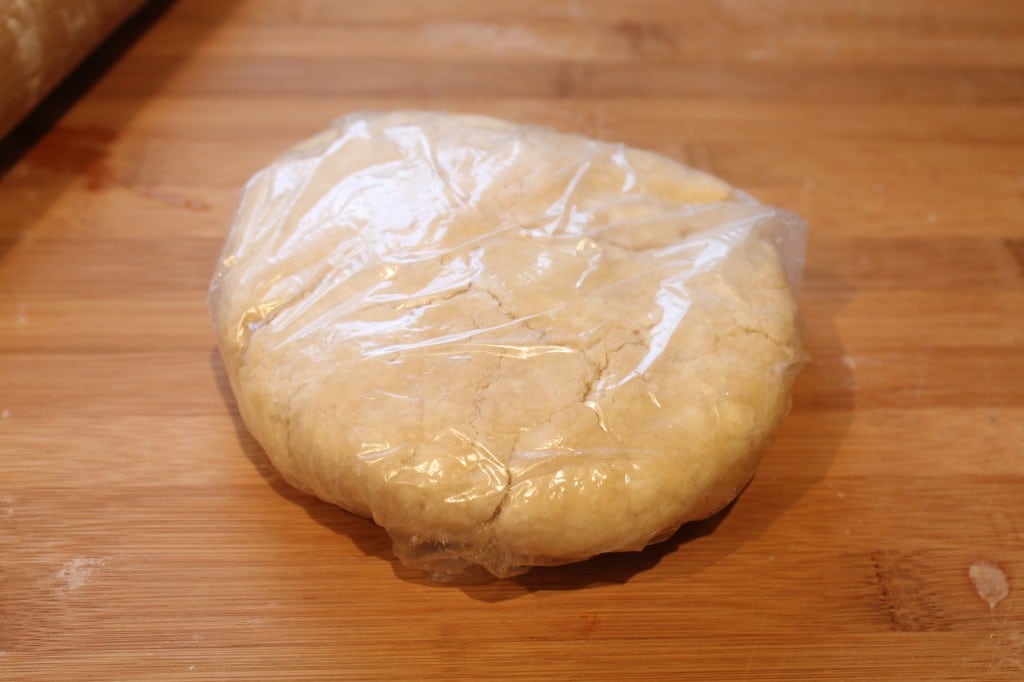 Form into a disc and stick in fridge for about thirty minutes. 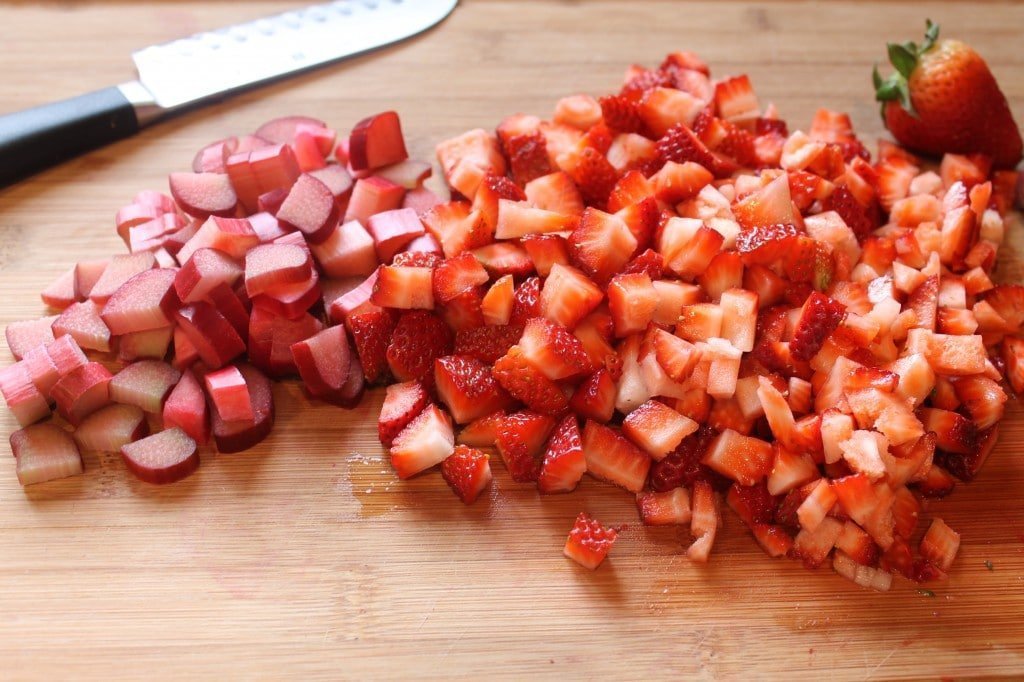 Time to start the filling. Chop strawberries and rhubarb into small pieces. If we were making a whole pie I would keep them bigger but we’re sticking with the miniature theme. 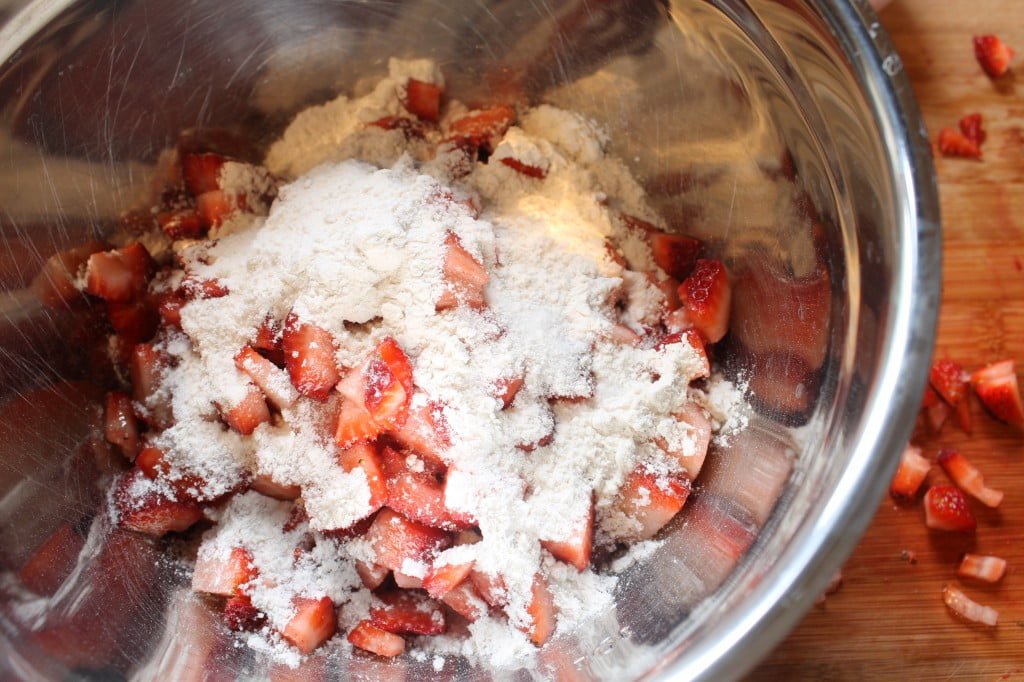 In a bowl add the fruit, flour, sugar, lemon juice, and salt. 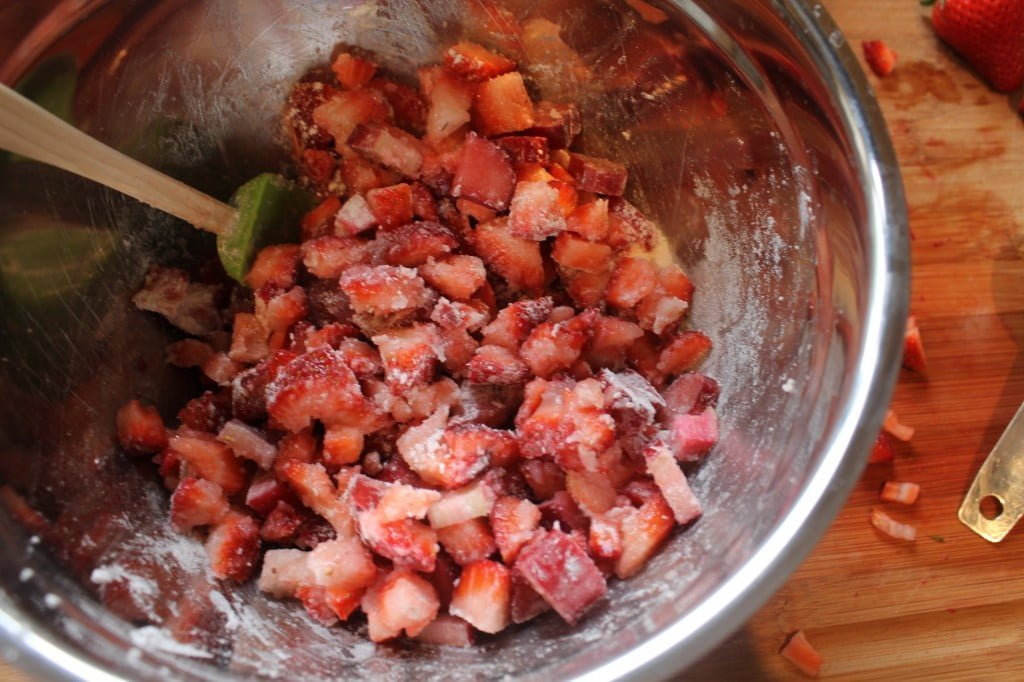 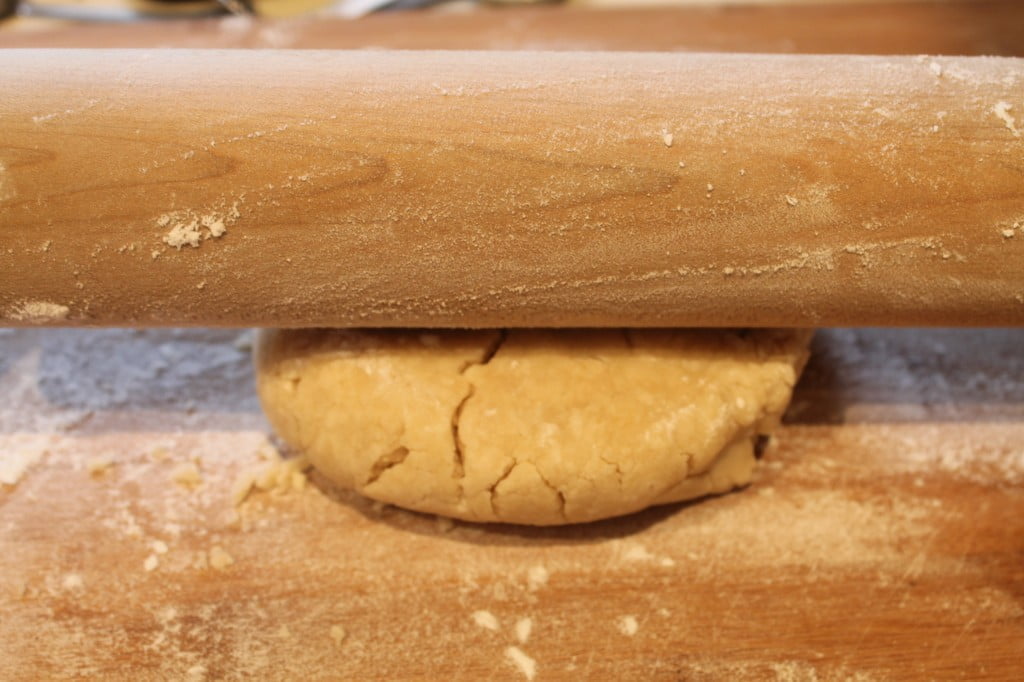 Flour a flat surface; I like to use my big wooden cutting board. Start to roll dough out moving quickly. 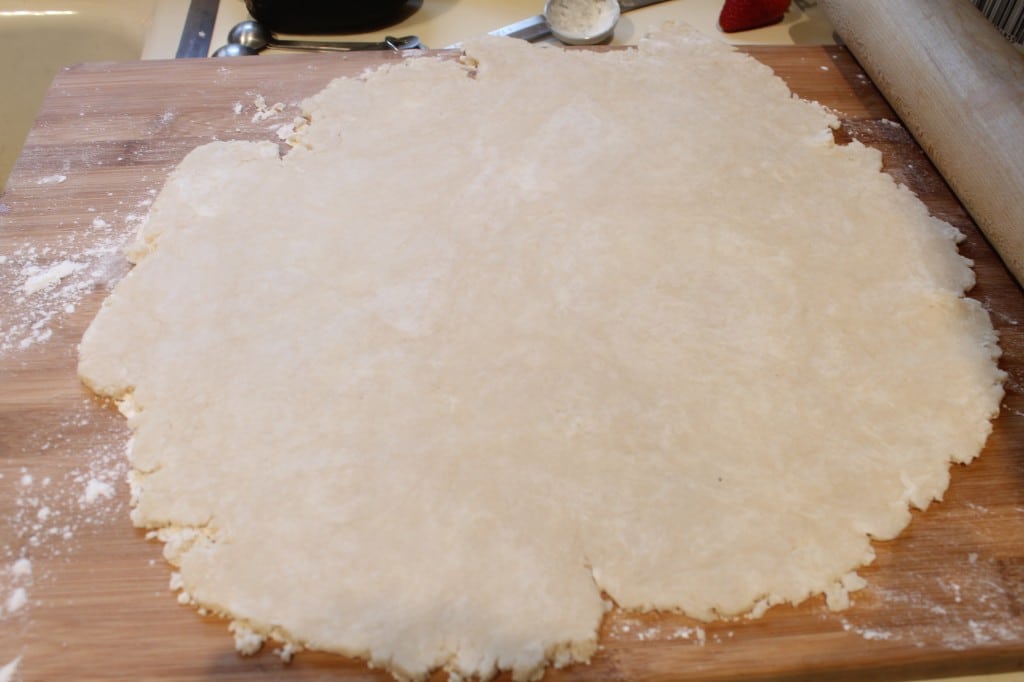 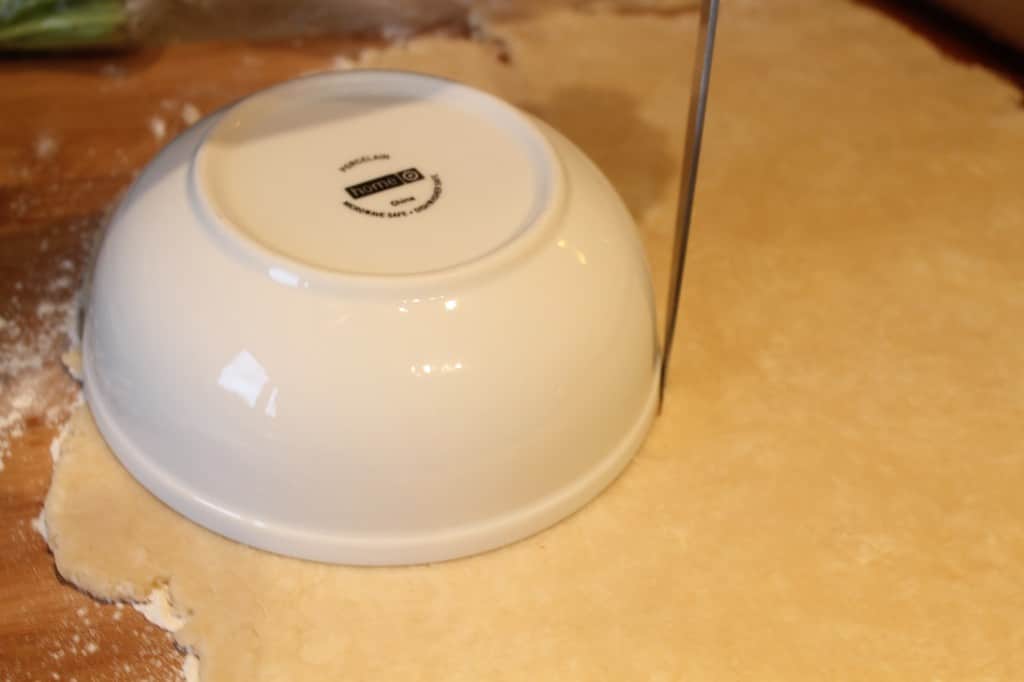 Using a bowl as a guide cut 5 inch circles. You will need to reform scraps to make more circles. You should have six total. Remember to work quickly. 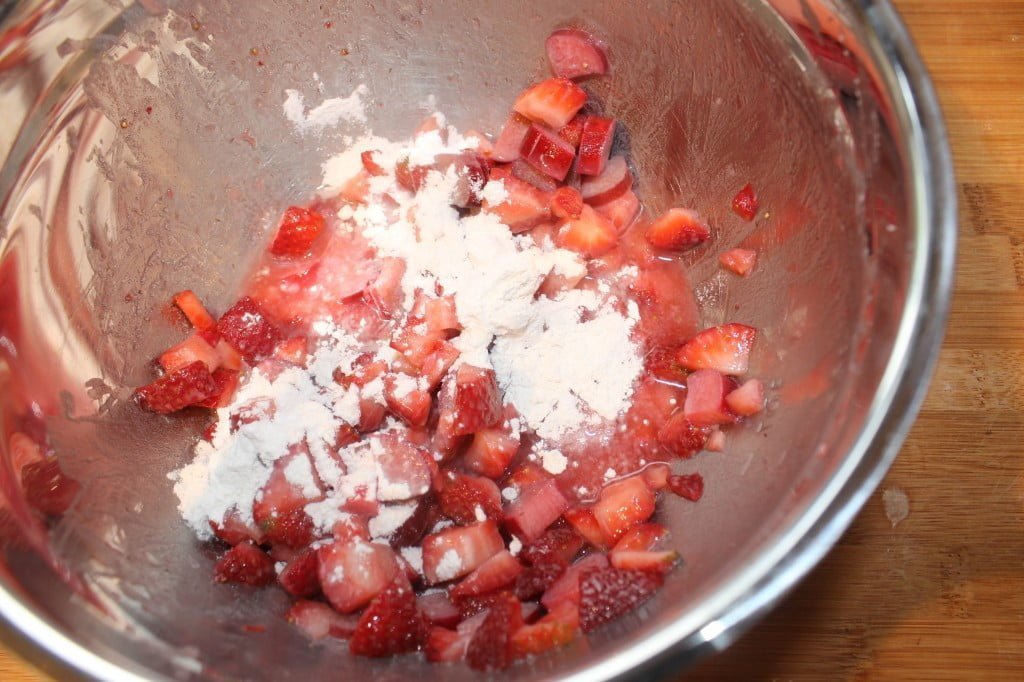 While the filling was sitting the fruit rendered its juices, if that happens to you just add a tablespoon of flour or so to thicken the mixtue up. 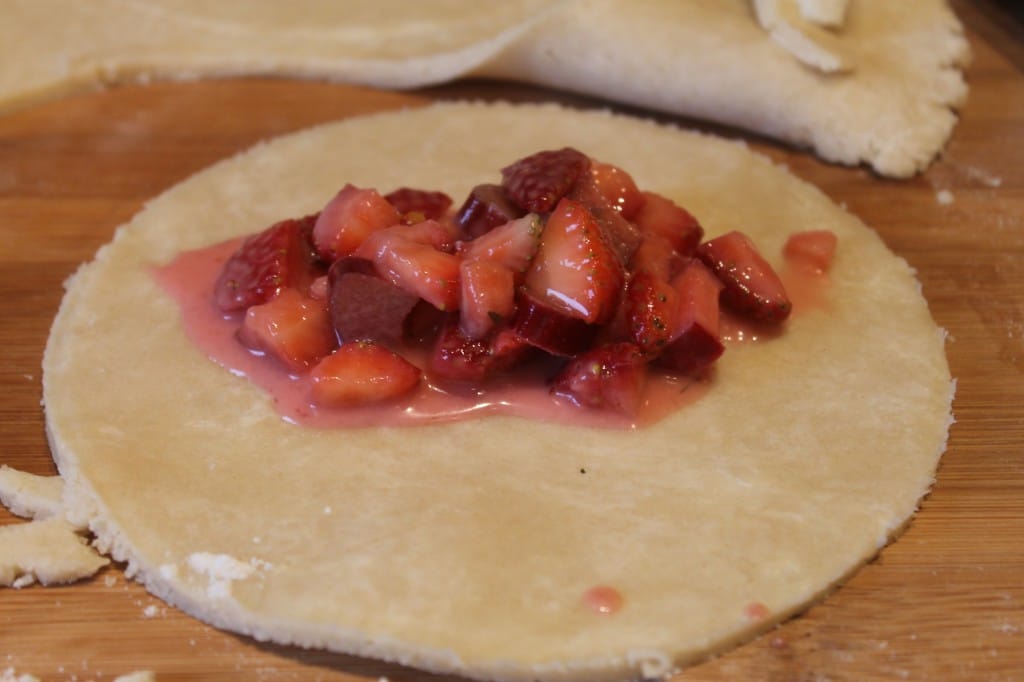 Place two tablespoons of the filling in the middle of each disc. I must have forgotten to take a picture but brush the outer edges of half the disc with a little cream to help the two sides adhere. 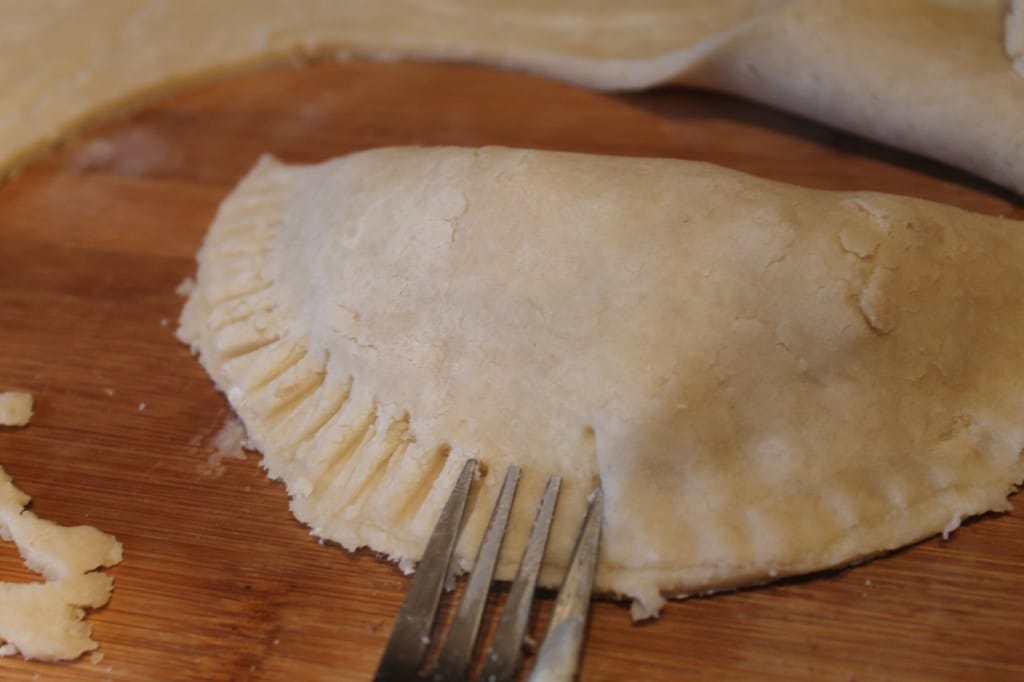 Fold one side over and press edges together. Make them pretty with a fork. You could also crimp them and make them even prettier but I prefer a more rustic look. At this point I like to stick them back into the fridge for about 15 minutes, just to ensure the dough stays nice and flaky. I know, I know it’s a lot of back and forth with the fridge, you don’t have to do this but, trust me, it’s worth it. 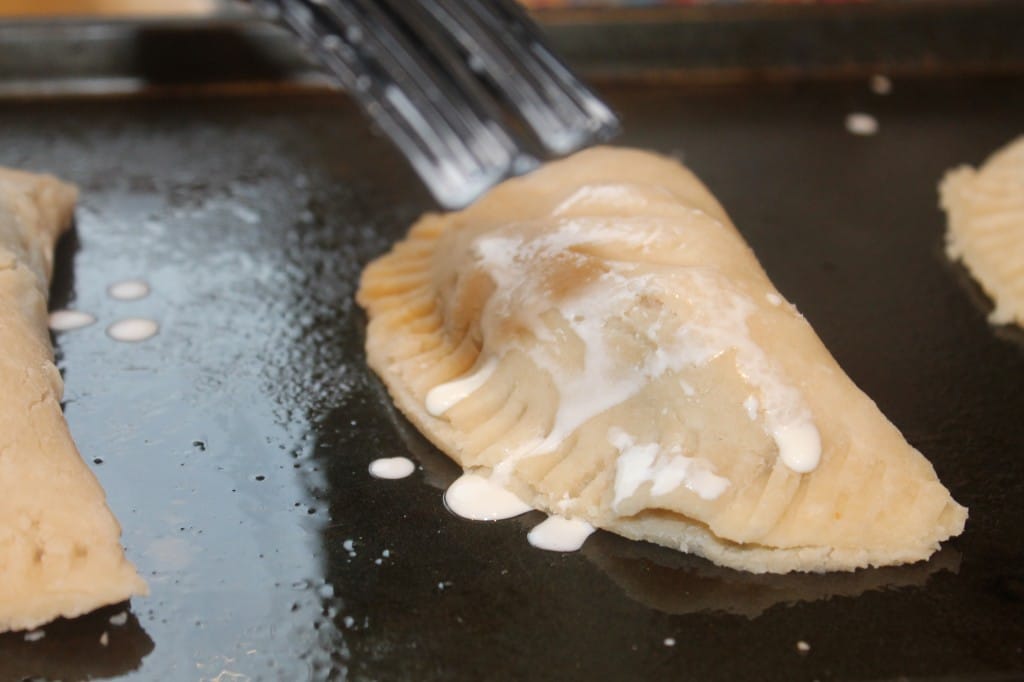 After their little cat nap in the refrigerator, place them on a greased cookie sheet.  Brush with cream and sprinkly with sugar.  It’s not shown here but cut three slits in the top of each pie to let the steam escape while baking. 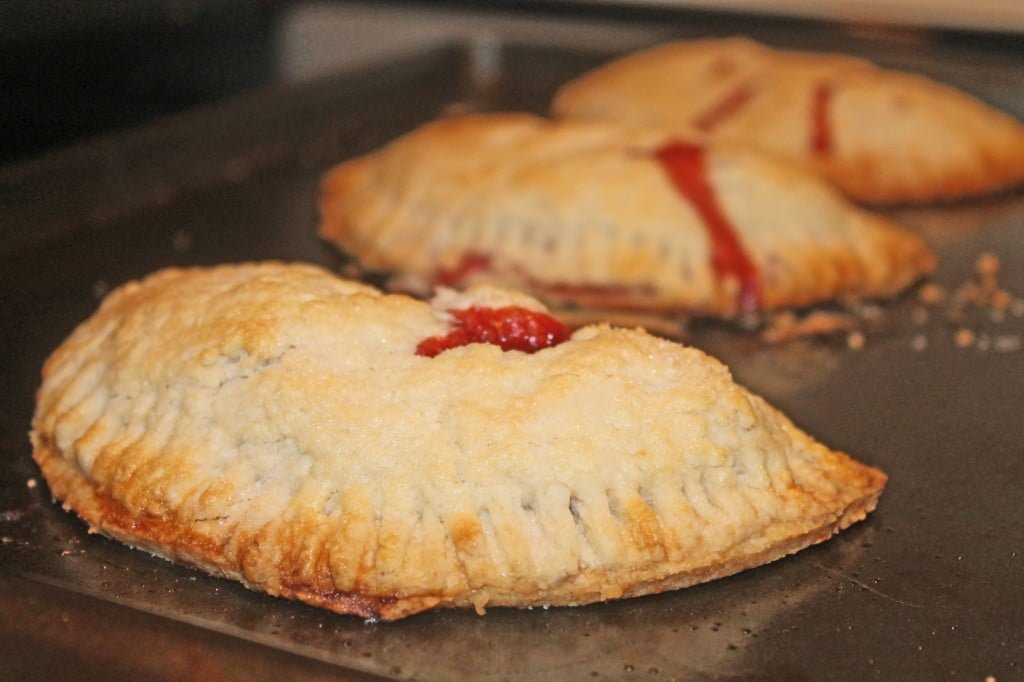 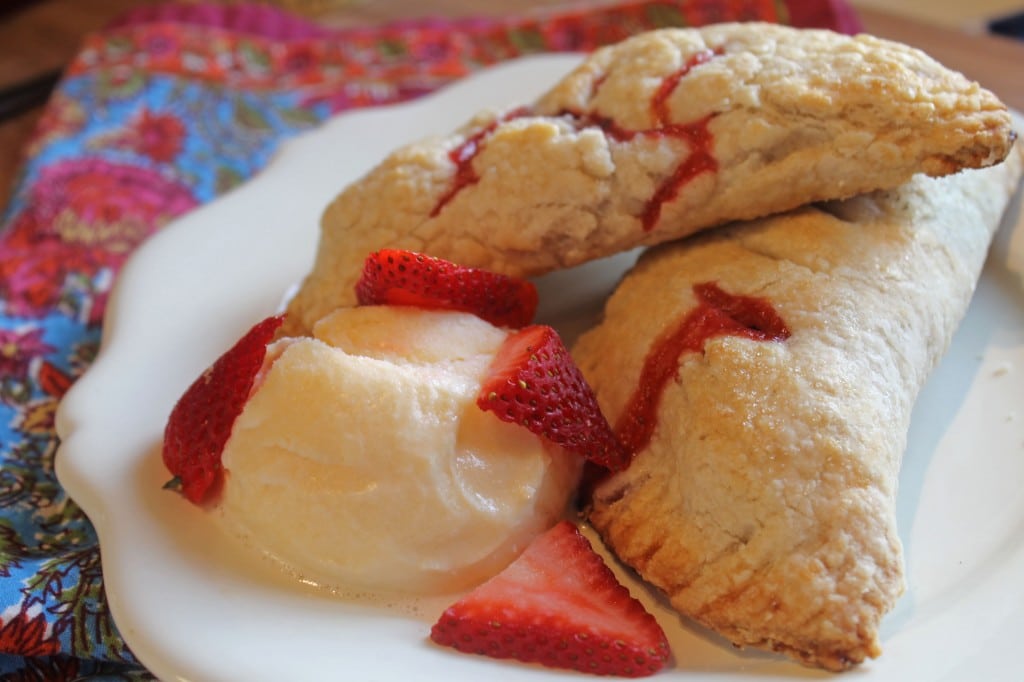 1 tablespoon sugar (plus more for sprinkling)

¼ cup of sugar (or more, if strawberries are not sweet enough add a couple more tablespoons)

Juice of a quarter lemon

To make crust: Combine flour, salt, and sugar in bowl.  Add butter and shortening. Cut them in with a fork or pastry cutter until the mixture looks like little peas and coarse meal. Add ice water a little bit at a time until the mixture becomes cohesive and can be formed into a ball. (It will still be slightly crumbly) Add more water if necessary.  For into a disc, wrap in plastic and refrigerate 30 minutes. Quickly roll dough out and using a bowl or cookie cutter as a guide, cut 5 inch circles.

To assemble:  Preheat oven to 425 degrees. Place two tablespoons of filling in the middle of each disk.  Brush half of the outer edge of each circle with cream. Fold one side over and seal the two sides shut.  Press outer edges with fork. Brush each pie with cream and sprinkle with sugar.  Cut three slits in each pie to let steam release during the baking process.  Bake at 425 for 10 minutes.  Lower heat to 350 degrees.  Bake another 25-30 minutes or until the pie is a light golden brown.  Let cool 5-10 minutes.  Serve with vanilla ice cream and fresh strawberries. 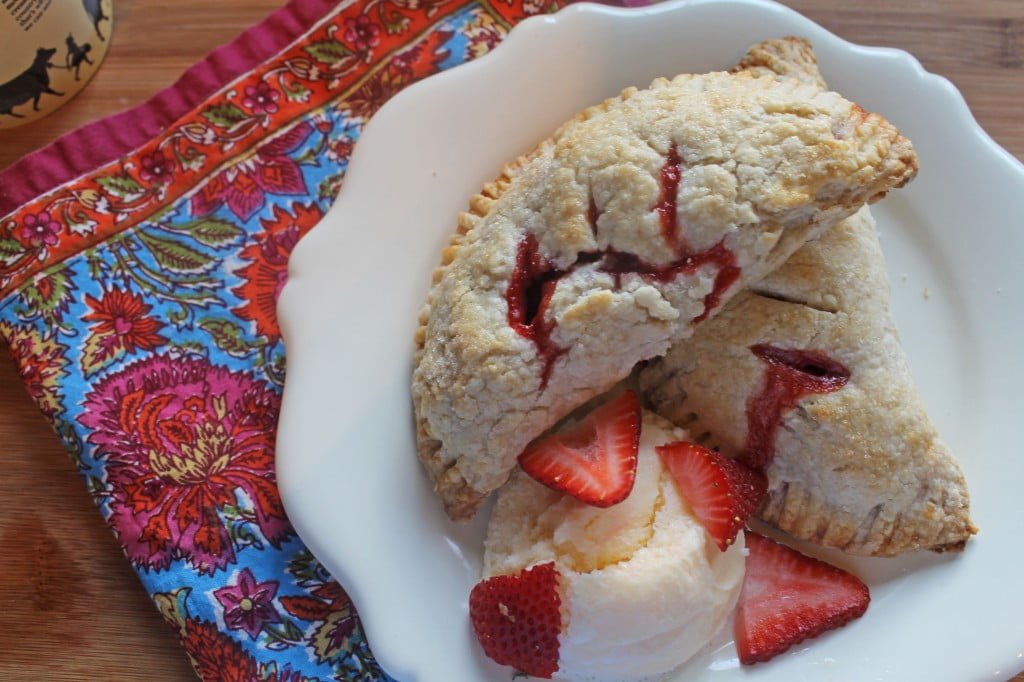