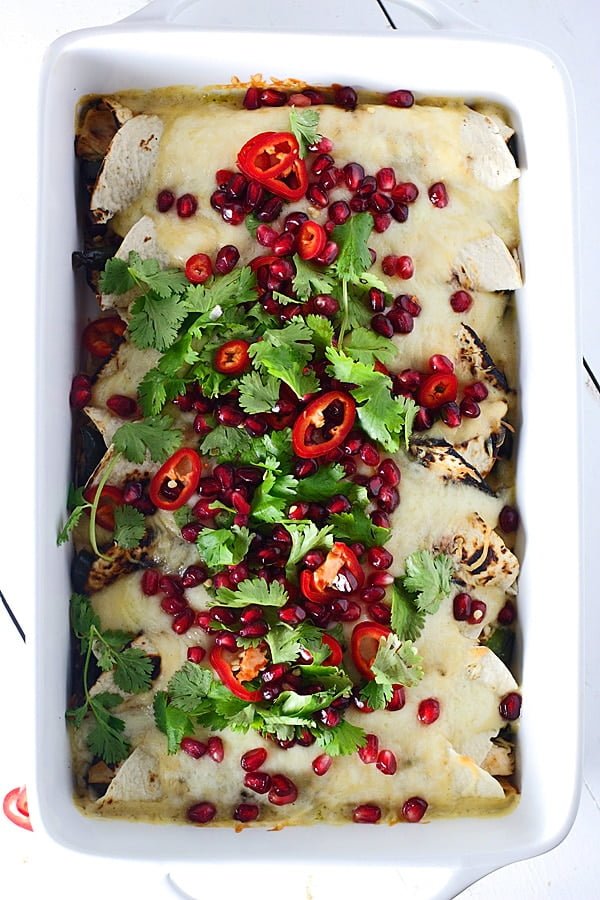 As many of you know, I have a serious obsession for anything tex-mex, and it’s pretty rare to go a month without some sort of tex-mex influenced dish here, let alone beyond the scope of this blog. In fact, it’s rare we go a week without consuming tex-mex in some way, shape or form; whether it’s a recipe created for this space, a dish we’ve whipped up on a weeknight or dinner at our favorite hole-in-the-wall Mexican joint. Although if you look at the last couple of months, you’d never know as our diets have depicted a completely different story. I can count one, maybe two times we’ve had Mexican in the recent past – and that needed to change STAT. 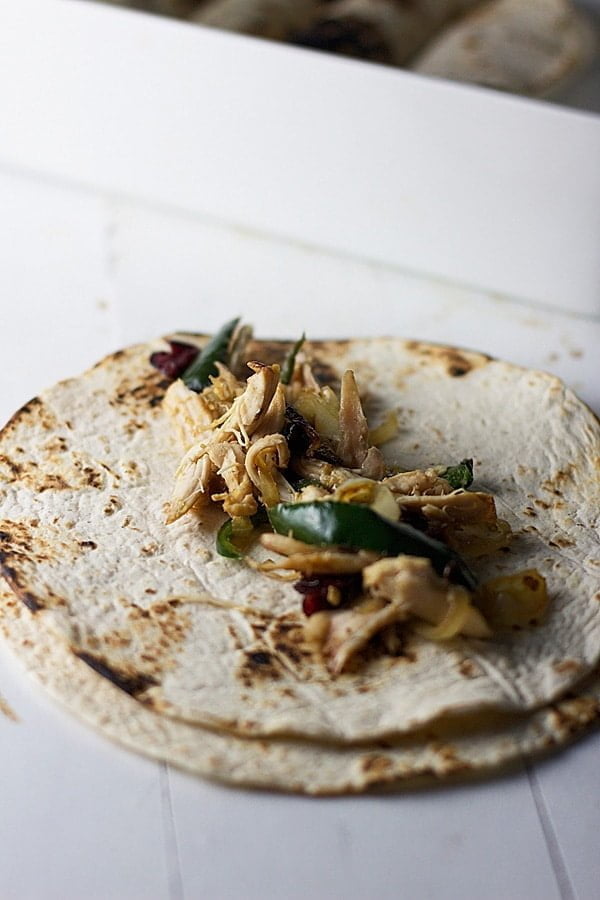 When I’m in a Mexican drought, these chipotle sour cream enchiladas (pardon the horrendous pictures) or these classic enchiladas (with homemade enchilada sauce) will typically satisfy my craving instantly, but I’ve got our upcoming trip to Puerto Vallarta on the brain, and I cannot stop thinking about a traditional Mexican dish they specialize in called Chiles En Bogada. Interestingly enough, I haven’t actually tried it, so I’m not really sure why it’s embedded into my brain as something I love. I imagine it’s because I’ve been obsessively stalking Yelp for reviews of our favorite restaurants around the PV area, and this dish is always something that pops up at all the “authentic” non-touristy spots. It’s a dish I’ve always wanted to order when presented on a menu, and as a self-proclaimed adventurous eater, you would think I would have just gone for it, but each time I’ve shied away from it to go with a safer choice of enchiladas or street tacos. Clearly I should have just taken the plunge, since I’m still talking about it to this day – almost a whole year later.

So until I’m actually in Mexico again and can try it for myself (which I will do this time), I thought I’d take the parts I’m drawn to and put my own spin on the Mexican classic – enchilada style.

As is the case with most authentic Mexican dishes, Chiles En Bogada – which translates to Chiles in Walnut Sauce – is basically just a healthier version of a chile relleno. Instead of being deep-fried, whole poblano peppers are stuffed with a mixture of ground beef or pork, various fruits and nuts, smothered in a creamy walnut sauce and then sprinkled with tangy pomegranate seeds.

In my enchilada version, I sautéed two whole poblano chiles with a little bit of onion, garlic and jalapeno, and instead of ground pork or beef, used a rotisserie chicken – almost always my go-to when making weeknight enchiladas. To keep in line with the filling of the traditional version, I threw in some dried cranberries for that sweet flavor that makes the original so unique and interesting, plus I just love the combination of sweet and spicy encompassed all in one bite.

Annnndd, here is where I completely butchered the integrity of the original (in a good way), instead of making a traditional walnut sauce, I went a more indulgent route with a good ol’ fashioned cheese sauce. The sauce is pretty straightforward, made up of part chicken stock, part milk, a whole lotta Monterrey jack cheese and just a touch of coriander and cumin for subtle warmth. 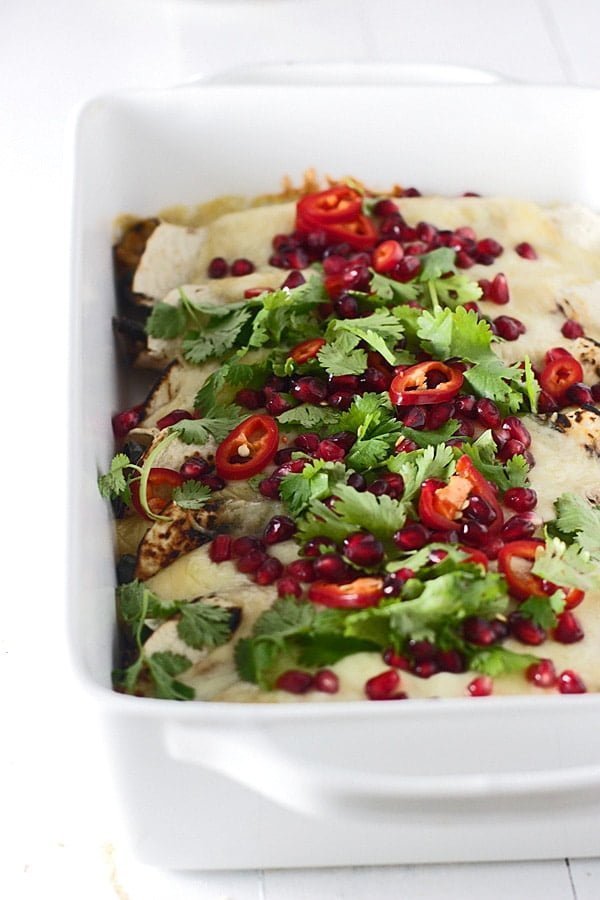 The filling is wrapped up in charred tortillas (optional), tucked into a casserole dish, smothered in the creamy sauce and topped with a dusting of shredded cheese. It’s popped into the oven and baked until the cheese is melted and the sauce is bubbly.

Once it’s out of the oven, I let it rest for a little while and then top it with a relish of sorts, made up of the classic topping of pomegranate seeds, chopped cilantro and sliced fresno chili peppers for extra heat.

I feel like anytime I come up with a new enchilada recipe, I enthusiastically proclaim it’s my new favorite enchilada dish, but this time it’s for real, IT’S MY NEW FAVORITE ENCHILADA DISH. The sweet, spicy, tangy, cheesy combo gets me every.single.time. I’ve been sneaking bites (cold bites nonetheless) every time I open the fridge, and it’s just as good, if not better than the moment it came out of the oven — a sure sign it’s a keeper. 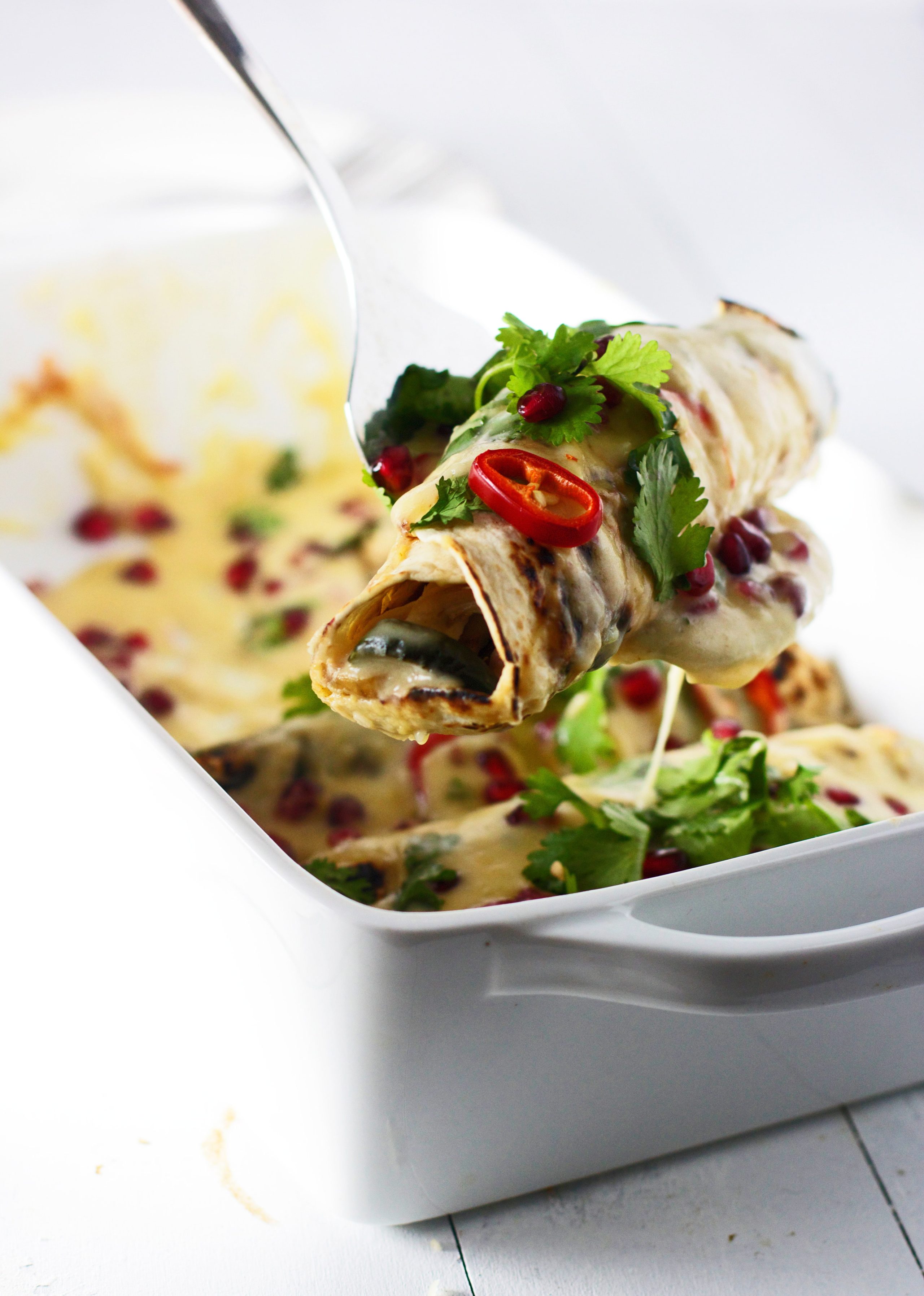