This Sticky Pomegranate Chicken with Coconut Rice is the EASIEST, most delicious weeknight (or weekend!) dinner. Seared chicken thighs are covered in a sweet and tangy pomegranate and mustard sauce and served with coconut rice, pomegranate arils and honey-roasted almonds. Sure to be a new family favorite. 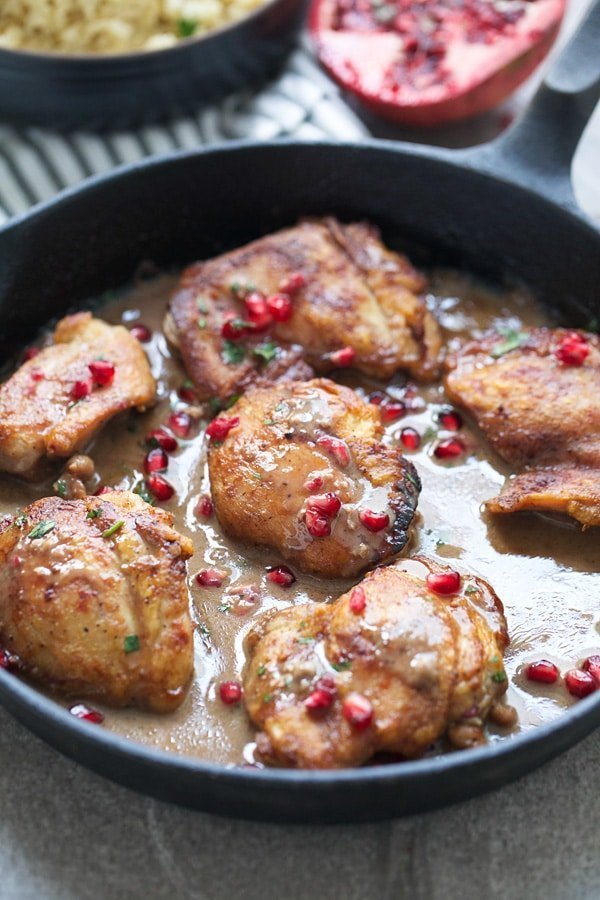 I never realized just how much we eat chicken until I was a in a conversation with one of my friends about how it would be easy to become a pescatarian. I mean, I love seafood, and I don’t particularly LOVE the flavor of chicken the way I do scallops, salmon, lobster and other sea creatures, so it would be a cinch right?

Because when it comes to down to it, it’s the protein some of my most beloved dishes consist of – chicken parmesan, chicken piccata, chicken fingers, chicken burgers, roast chicken, the list goes on and on. It’s inexpensive and totally versatile; so I guess I do in fact, love chicken. Who knew?! 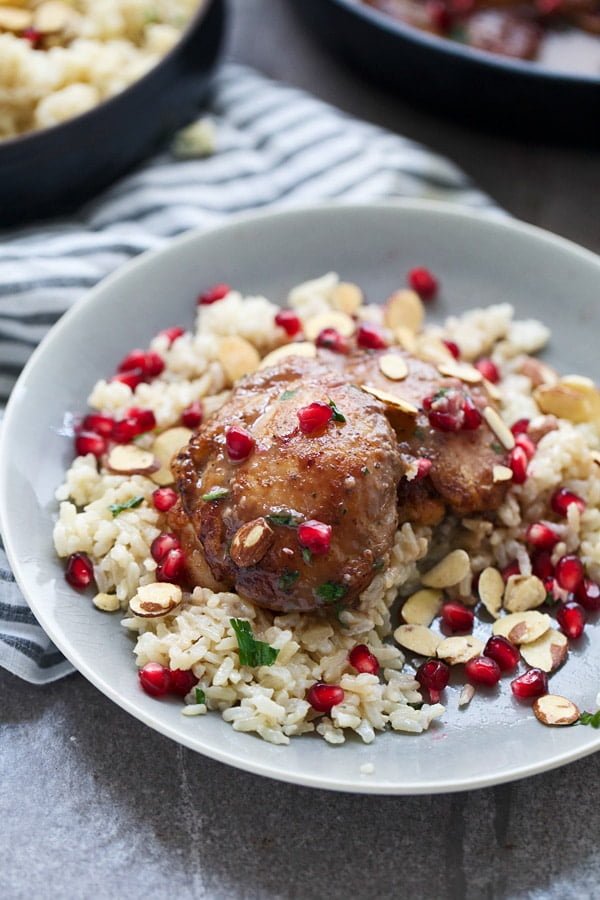 While most of our meals only utilize the breast part of the chicken, I’ve been incorporating the thighs more and more. For one, they’re a heck of a lot cheaper. Two, they’re more flavorful. And three, it’s way more difficult for them to dry out than their leaner counterpart.

Typically I’ll use the thigh in one of two ways: In the slow cooker to be shredded for sandwiches or essentially braised (seared and then cooked in liquid in the oven), and to be eaten with a knife and fork, like today’s Sticky Pomegranate Chicken with Coconut Rice.

The beauty of the braising method is it allows pretty much infinite preperations that you can tailor to your taste or even the seasons. For instance, here, I put a festive, wintery touch on it by using in-season pomegranate juice for part of my liquid component and then garnished with bright pomegranate arils in the end. 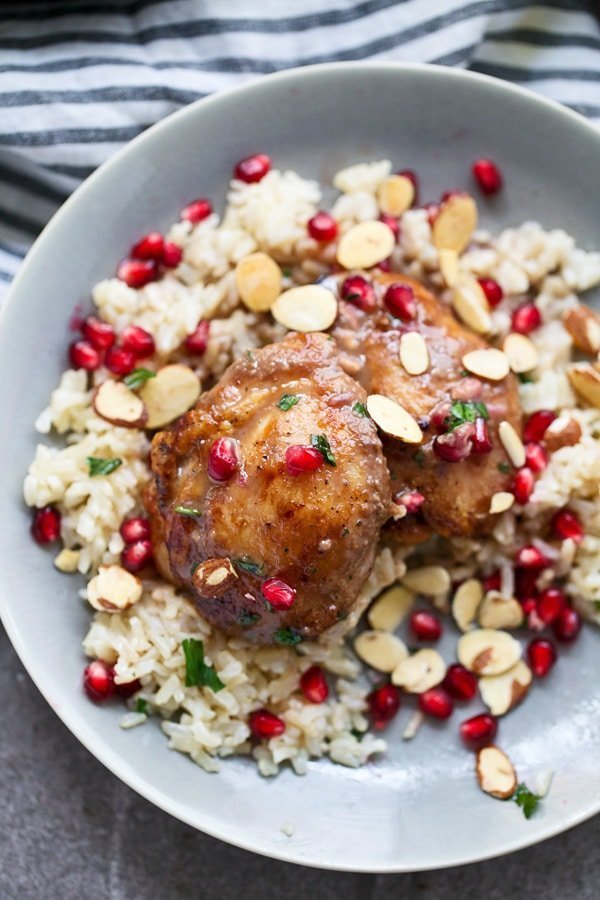 To start, the chicken is seasoned liberally with salt and pepper and seared on both sides in a screaming hot cast-iron skillet. Once both sides are brown and crispy it’s covered in a mixture of pomegranate juice, chicken stock, Dijon mustard, apple cider vinegar and maple syrup.

The whole pan gets popped into the oven to finish cooking the chicken and to reduce the sauce, and the dish is basically done. It’s that easy.

And the sauce… You guys. This sauce is so delicious. It’s actually an adaptation of an old Epicurious recipe I used to make all the time, except the sauce was just Dijon mustard, pure maple syrup and a little bit of apple cider vinegar. It has the perfect amount of sweet to savory to acidic flavors, and I just can’t get enough of it. The addition of pomegranate juice and chicken only makes it even better. 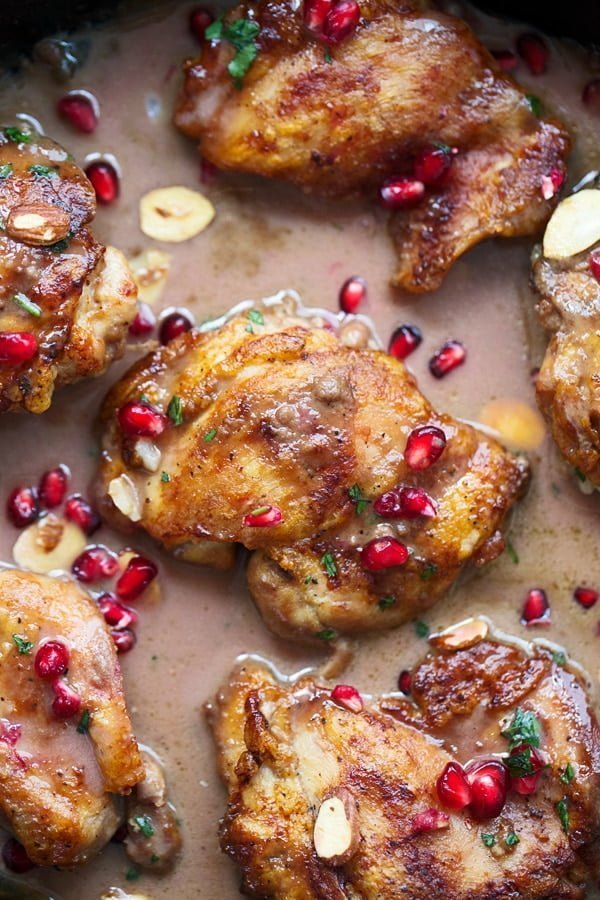 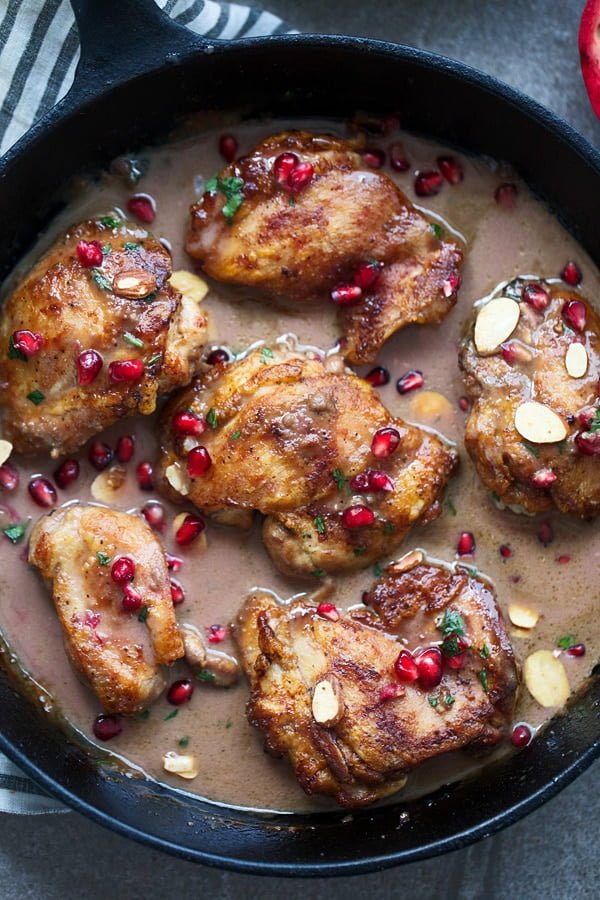 While the chicken cooks in the oven, a super easy coconut rice is thrown together with jasmine rice (I use brown), coconut milk and salt. That’s it.

Instead of adding a bunch of stuff to the rice, I rely on the concentrated flavor of the sauce to smother over it so there’s just a hint of coconut flavor in each bite.

As a final touch, a handful of pomegranate arils around sprinkled around the chicken as well as a handful of slivered, honey-roasted almonds.

The chicken is nestled on to the rice, drowned in sauce, and ready to be devoured. 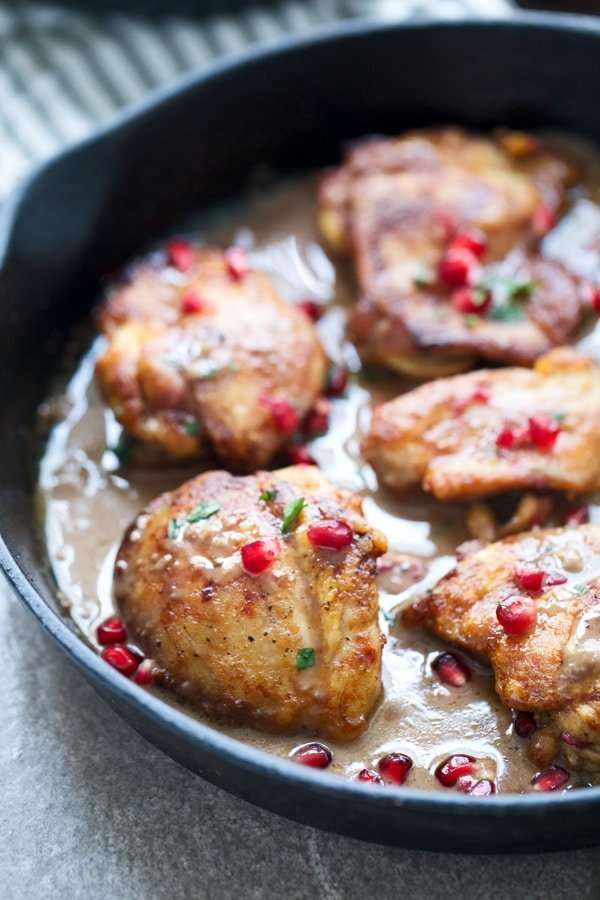 Print Rate Email
This Sticky Pomegranate Chicken with Coconut Rice is for all you meal planners out there that are sick of plain chicken and rice. This easy variation on chicken and rice is packed with sweet and spicy chicken thighs, a luxurious sauce, and the most addicting coconut rice.
Prevent your screen from going dark
4 people