No really, this is by far the the BEST Spaghetti all’Amatriciana you’ll ever make, and honestly it’s really just the best tomato-sauced pasta in general I’ve ever made – and to be clear, I’ve made a LOT of red-sauced pastas. 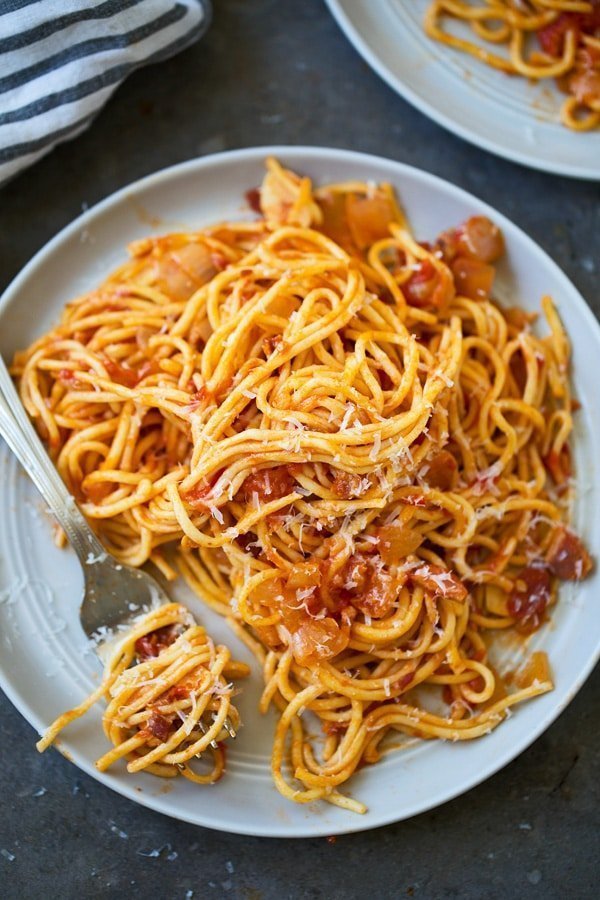 There are hundreds of recipes for Spaghetti all’Amatriciana out there, and while this one doesn’t deviate too far from any of them, the two secrets to making this recipe extra special are to use fresh tomatoes instead of canned, and go the extra mile and prepare spaghetti from scratch. If you’re in a pinch, and don’t want to whip up your own pasta (it probably adds an extra hour to hour and half to the recipe), that’s totally fine, just make sure to follow the directions for preparation the exact same.

Every year, around this time, we seem to have a surplus of juicy, ripe tomatoes, and each year, after I’ve had one too many BLTs and salads, I gather whatever we’ve got and whip up a pasta of some sort. Last year, I threw this together, but this time, I wanted to use up the bacon I had lingering in my freezer, and add a little bit more spice to the mix, so an easy amatriciana sauce is the first thing that came to mind.

At first glance it appears to be just a basic marinara sauce, but the addition of smoky bacon, TONS of onion and garlic, and a dash of crushed red pepper make it infinitely more flavorful. 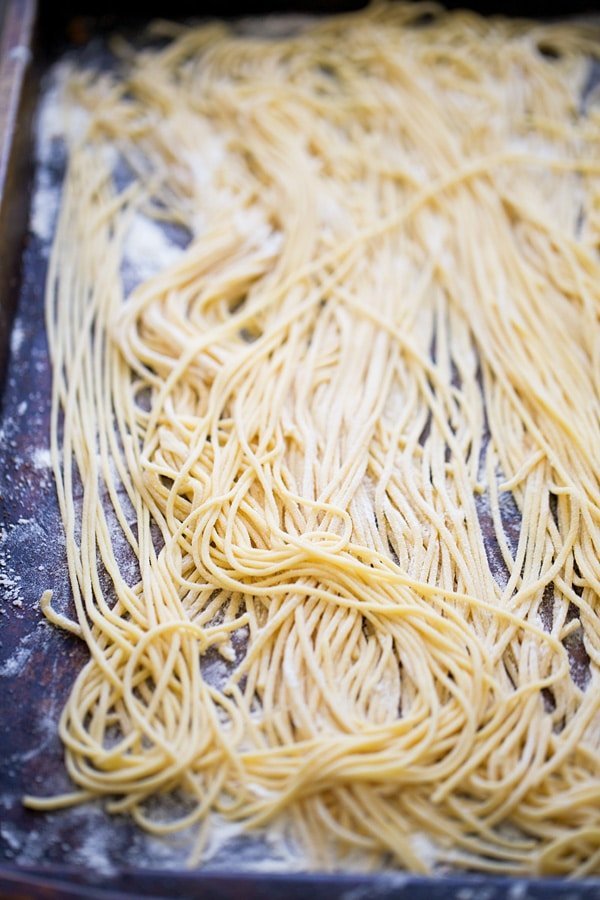 Typically a classic amatriciana sauce is made with pancetta or guanciale, which are both similar to bacon, but aren’t smoked. I’m sure a true Italian would argue they can’t be replaced, but I happen to love the smokiness classic American bacon adds to the tomatoes, and I also wanted this to be a recipe that used ingredients most people either had on hand or were very familiar with, so bacon it was.

To keep the ball rolling and to make the recipe process as efficient as possible, I started by making the pasta, which has to rest for 30 minutes, leaving just enough time to get the sauce going. 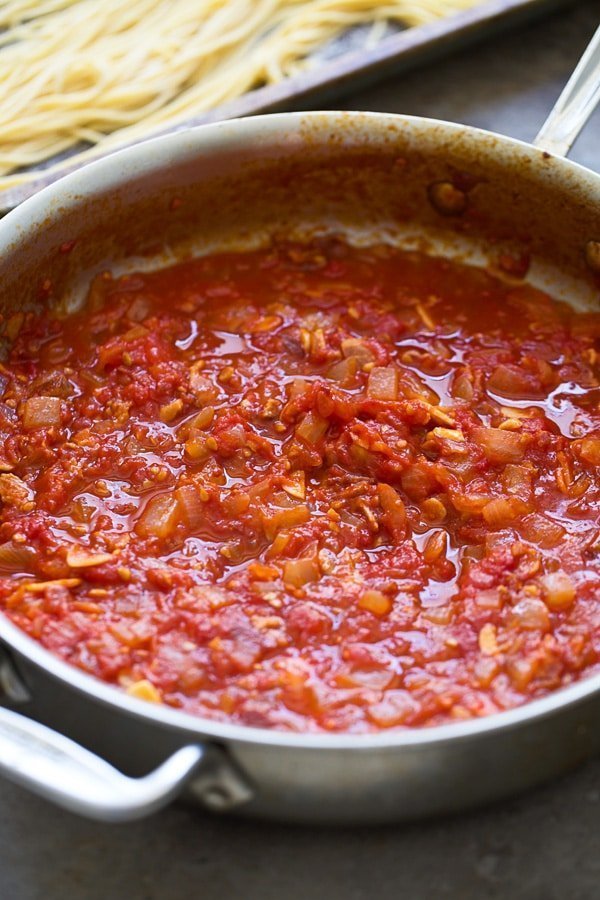 Homemade pasta is just five ingredients: flour, water, eggs, olive oil and salt. The ratio in which you use the ingredients will determine the texture and color of your pasta, and I happen to like a more egg-dense pasta, so my version has four egg yolks, two whole eggs and then a scant amount of water and oil.

Back in the day, I mixed all of the ingredients by hand, then ran everything through one of those old-fashioned pasta machines (which I still do sometimes), but this time, I threw all of the dry ingredients in to the food processor, then drizzled in the wet ingredients while the processor was on. From there, I let the dough rest, and then used my Kitchen Aid pasta attachment to crank out the fresh spaghetti in mere minutes.

While the dough rested, the fat was rendered from the bacon in a giant sauté pan, and when it was crisp, transferred to a paper towel to drain. From there a few cups of chopped onion, five cloves of garlic, plenty of salt and a pinch of crushed red pepper were sautéed in the bacon fat and touch more olive oil.

In most cases, I’d add more crushed red pepper, but since Teddy was going to be slurping it up as well, I kept the spice pretty mild. Feel free to add another 1/4 to 1/2 teaspoon to up the spice level to your taste.

Once the onion was softened, I threw in the tomatoes, then let the whole dish simmer and reduce while I ran the pasta through the machine. Again, efficiency is key! 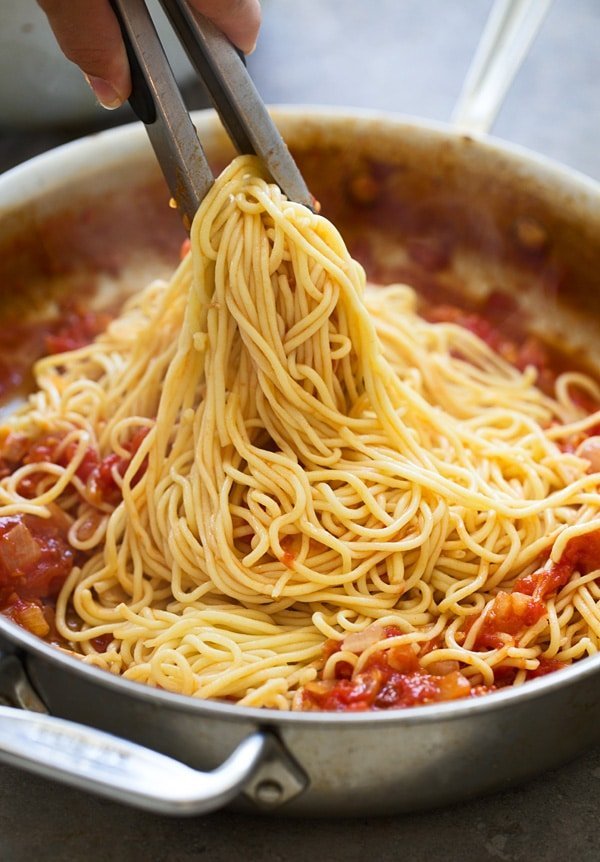 One point I want to stress, is that you shouldn’t cook your pasta until your sauce is finished. Because we want the sauce to only partially cook in the boiling water, and then finishing cooking in the tomato sauce, you don’t want to risk leaving it in the pasta water too long. So once the sauce has simmered for 20-30 minutes, I season it with as much salt as it needs, and THEN throw the pasta in the boiling water. 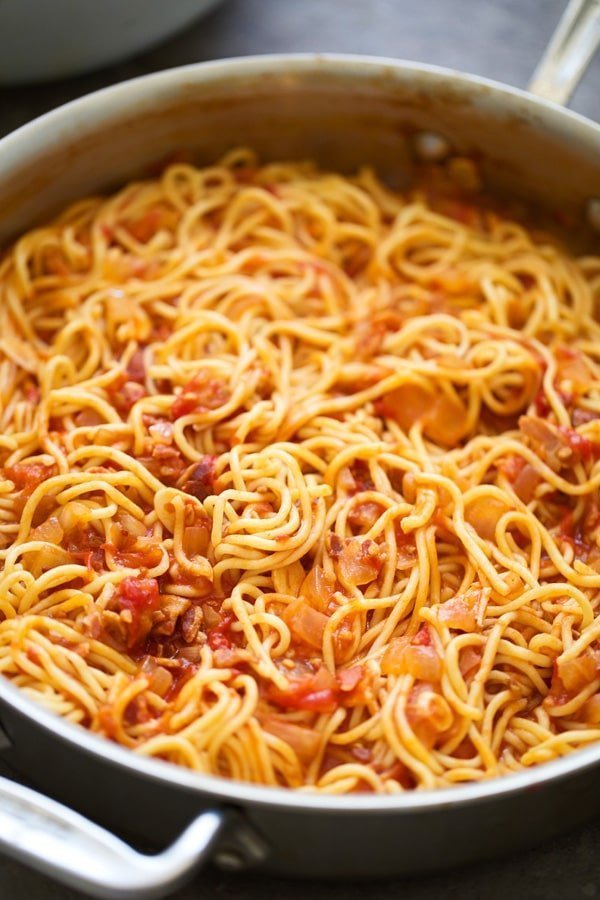 You also want to make sure to save PLENTY of starchy cooking pasta water, because that’s really going to marry the sauce with the pasta. Once you transfer the pasta to the sauce, toss it and continue to cook it over a medium heat while you add in a little bit of pasta water.

Once the pasta cooks for another few minutes, season to taste again, turn the heat off and then toss everything with a handful of grated pecorino cheese. 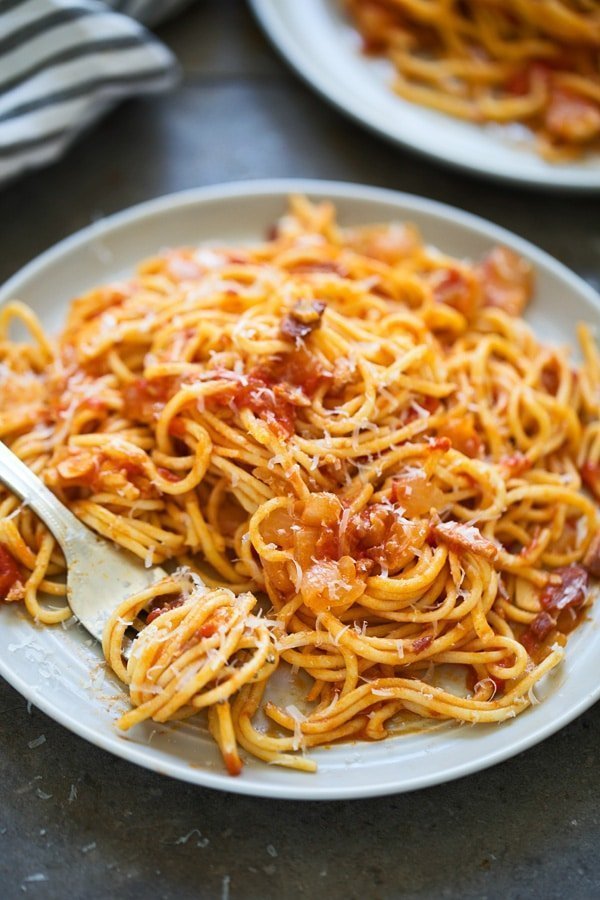 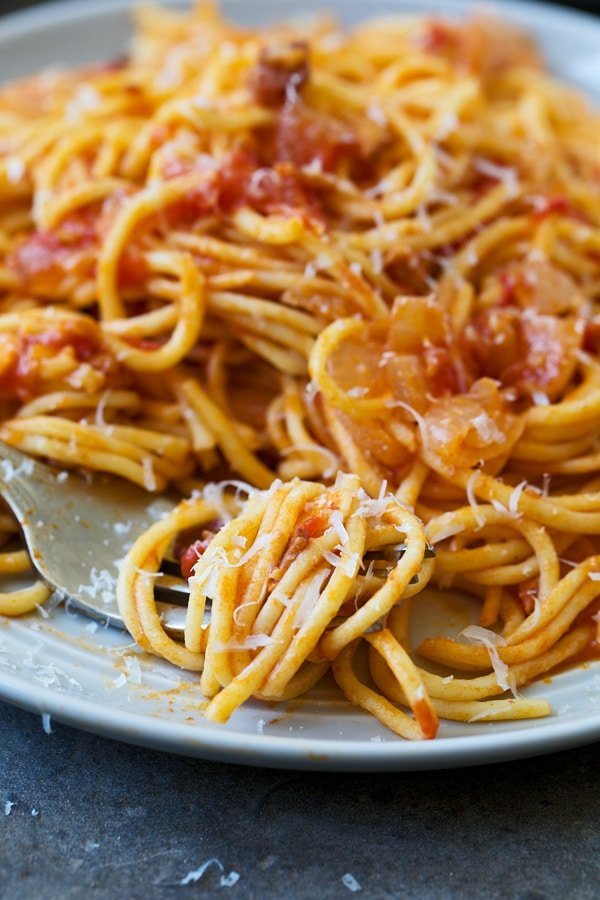 For more ways to use fresh tomatoes in pasta, check out these posts: