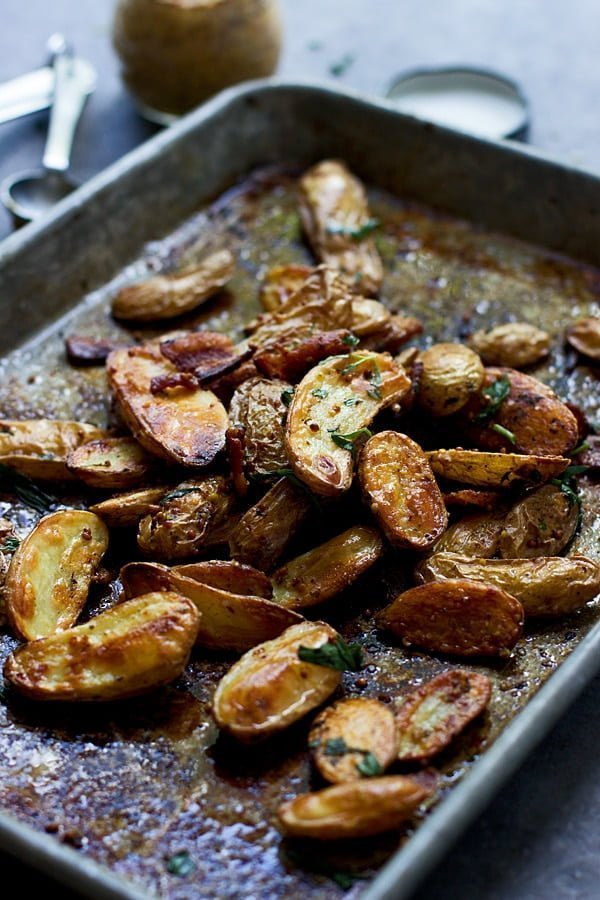 Sides. Often an afterthought in dinner planning, always a supporting actor, and never a lead. It’s a shame since there’s so many ways to prepare sides to make them more “star worthy.” I’m 100% guilty of this, as I habitually get wrapped up in the entrée portion of dinner, and just end up throwing a bundle of asparagus or broccoli into the oven with a little bit of olive oil, salt and pepper. Of course, it’s delicious, but is it memorable?? Not really. 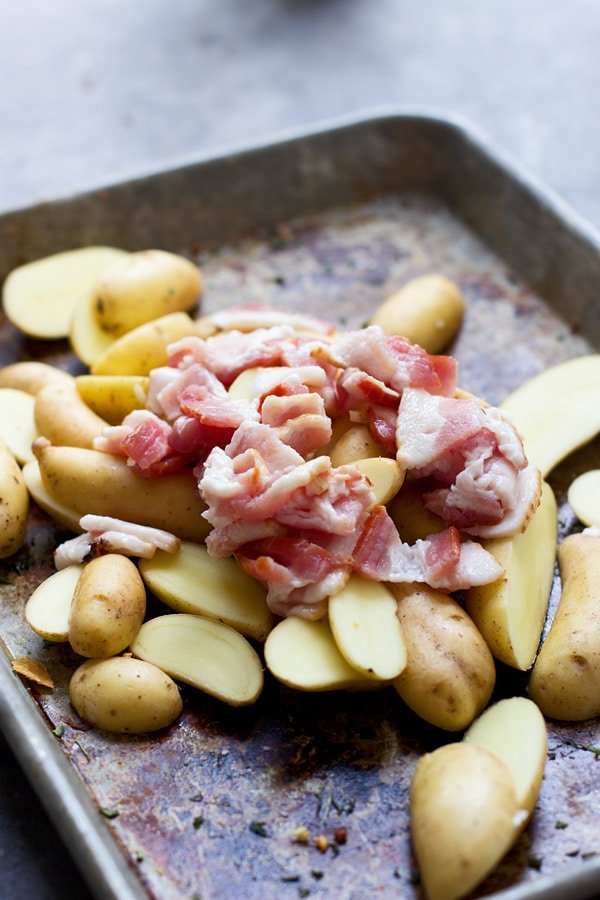 A few weeks ago when Kev and I were wrapping up our California coast vacation in Santa Barbara, and after much research and debate I settled on a cute little restaurant in the downtown area of SB called Scarlett Begonia. It was a pretty chilly day, but we still opted to sit outside at the colorful, closely knit tables. He ordered a coffee, black. I ordered a fancy decaff latte with almond milk (caffeine makes me crazy). He ordered the biscuit medley and cinnamon roll. I ordered soft scrambled eggs with potatoes, mushrooms and beemster gouda cheese. Typical for us (Him sweet, me savory). Both of us wanted to something small and light since we’d gorged in an obscene amount of food the week prior, but as both of orders reached the table, we realized this was not the place for small portions. 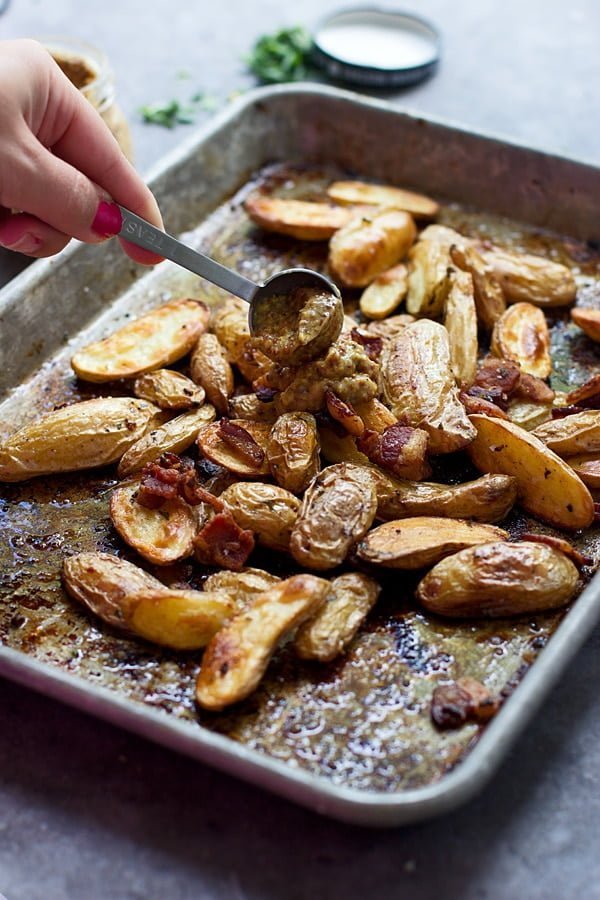 Kevin’s biscuits were HUGE, the cinnamon roll, ridiculously sized. My unassuming scrambled eggs were piled excessively high, sprinkled with a liberal amount of aged gouda cheese and then nestled on top of the most perfectly roasted potatoes I’d ever laid eyes on.

At first glance the potatoes looked like your average roasted potatoes, but after my first bite I realized they were anything but. Crispy on the outside, soft on the inside and generously covered in tangy whole-grain mustard and heavy cream, the potatoes were 100% the star of the show. Of course, as most foods go, I took a mental note to prepare them immediately upon our arrival back in Kansas City. 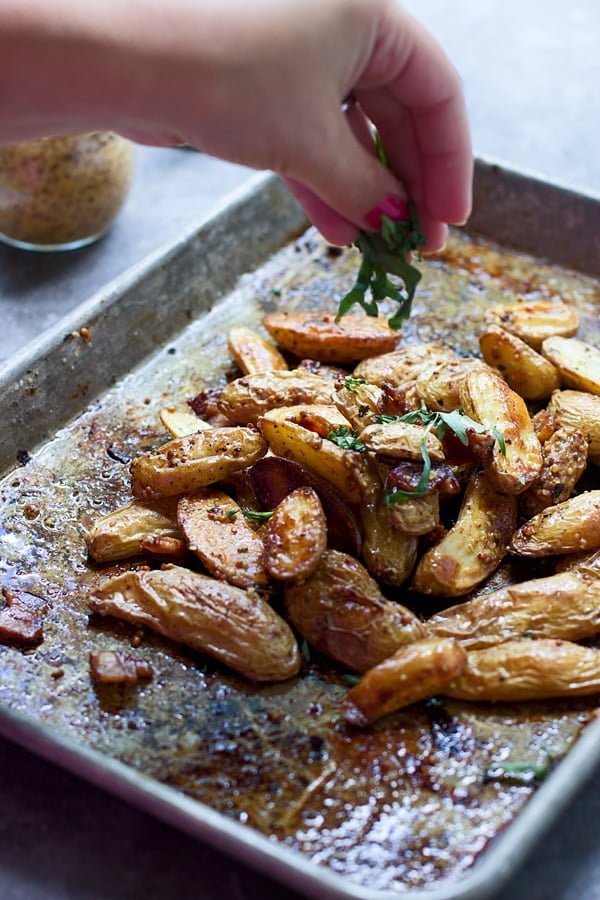 I made a couple of changes to my version of the potatoes, first by covering them in bacon before baking, and then by adding fresh tarragon at the end. I used fingerling potatoes here, but any small potato will work. About three pieces of bacon (I used center-cut, so two pieces of full-fat bacon will work), cut into small pieces are sprinkled over the potatoes and then they’re popped into the oven to roast. About 15 minutes into baking, I pull them out toss them in the fat the bacon has rendered and then sprinkle them with plenty of salt. The potatoes get tossed in the bacon one more time before removing them from the oven.

While they’re still screaming hot, I toss the potatoes in whole-grain mustard, a little bit of chopped tarragon and then season them to taste with salt and pepper

Crispy, tangy, addictive and perfect potatoes that are sure to be your new favorite side. 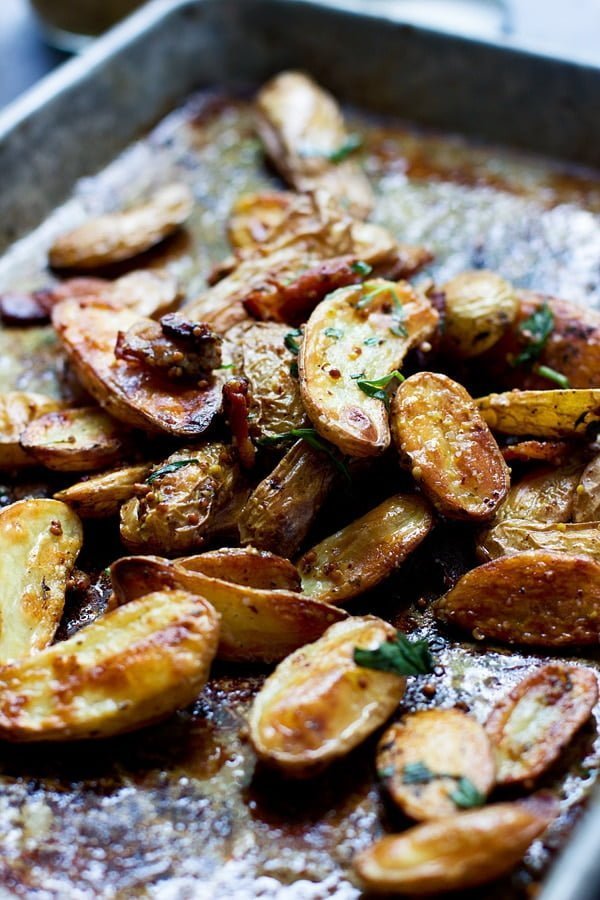