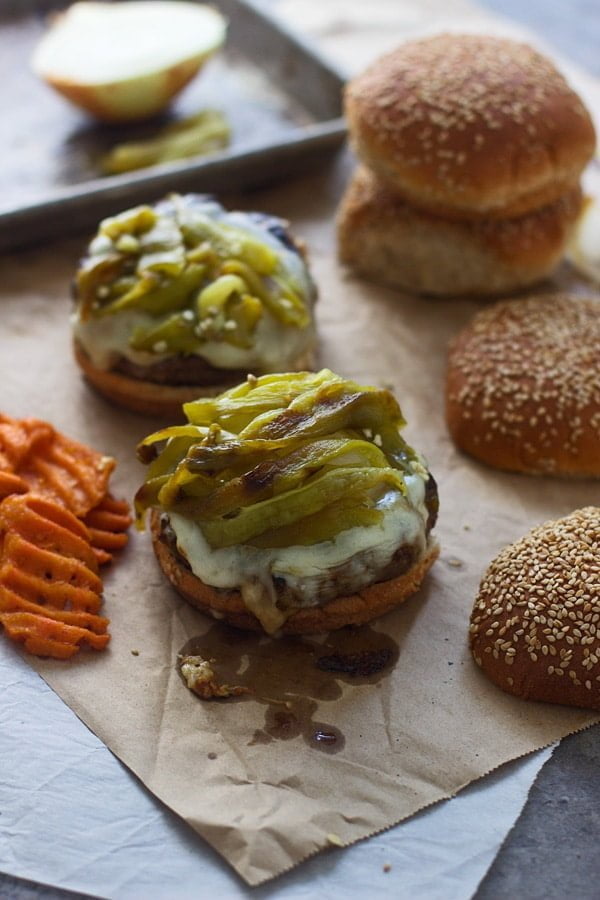 This was supposed to be a pizza. However, when I went to the grocery store to get the ingredients for the pizza version, I walked through the grill stand, set up just aside the door’s entryway, got a whiff of the burgers being grilled, and impulsively decided a burger would much better suit my stomach that evening. Plus, it’s been at least a month since I’ve shared a burger here, and with the summer days quickly fleeting, we better get them in while we can. 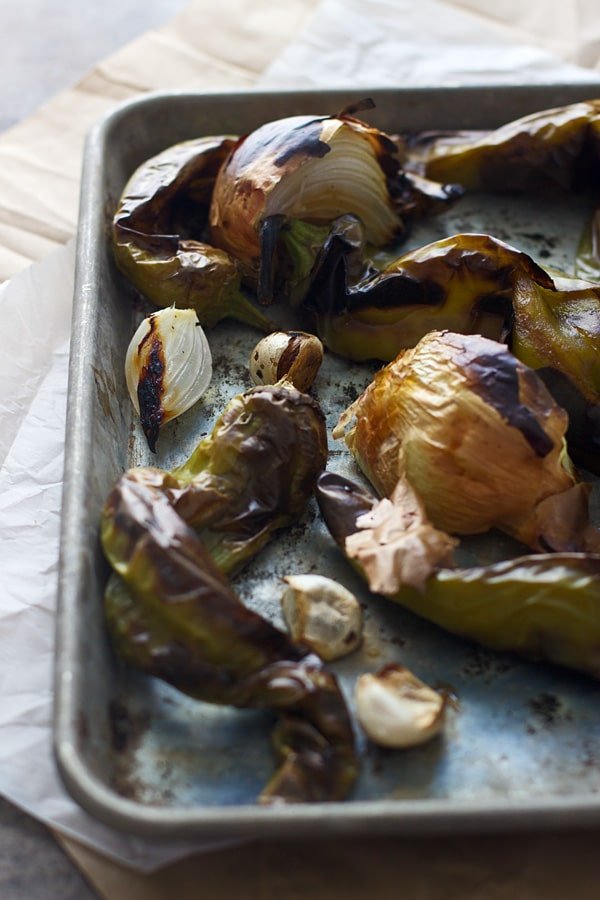 Hatch pepper season is one of my favorite food seasons in the summer, possibly even more than strawberry and tomato season, by just a hair, simply because they’re truly not available year-round. I’ve always loved cooking with a variety of peppers, poblano, being the one I use most frequently, so when a pepper that’s perfectly spicy, smoky and sweet comes around for a such a short period of time, you can bet that I’m going to use them up as much as I can. Just for reference, here are a few awesome hatch pepper recipes I’ve shared over the years – these hatch pepper enchiladas (people go C-RAZY for these), this honey salmon with hatch pepper sauté, and these hatch pepper tacos.

When it comes to making burgers at home, for me, the more stuff I can cram into it, the better. Typically this means, I pile a million harmonious ingredients on top of the burger, but in this case, all of the goodies get mixed into the actual patty, and only a few toppings get smothered on the surface. 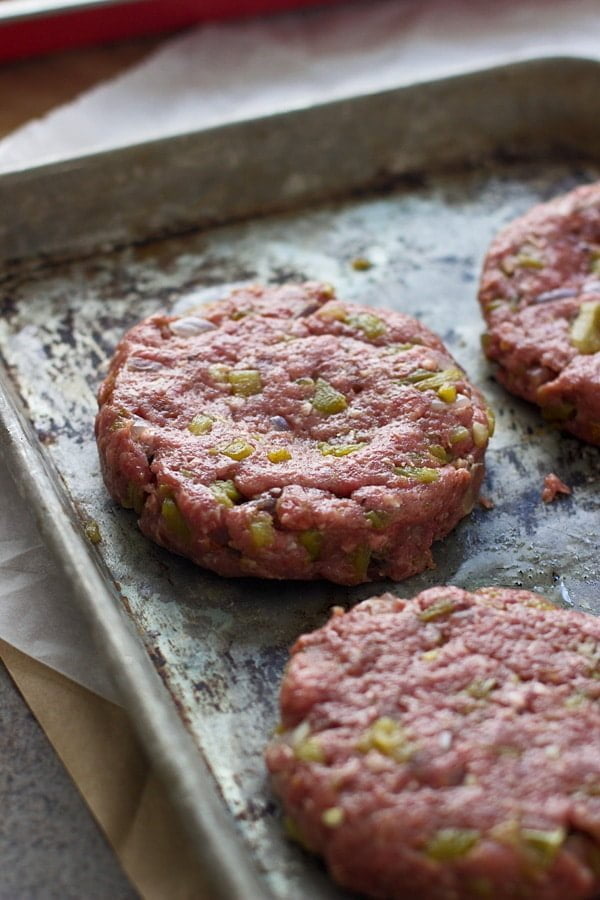 I won’t lie, this isn’t a burger you can just throw together. First, I roast the peppers along with some garlic cloves, and whole onion. Usually I roast peppers over my gas stove, but in this case, I was roasting more than just one or two, so I popped everything under the broiler to make things a little bit easier. Once the peppers start to blister and blacken, I turn them over so they can roast evenly, and then toss everything into a bowl covered with plastic wrap so they can steam and soften. The only thing you want to watch out for while roasting is the garlic, if it starts to look too brown, pull the cloves out and toss them in the bowl covered with plastic wrap before the peppers are done, there’s nothing worse than bitter, burnt garlic.

After the peppers come out, the bacon goes in and gets super crispy while the veggies steam. Everything gets chopped up into teeny tiny pieces and thrown into an 85/15 mix of ground beef, along with a touch of salt. 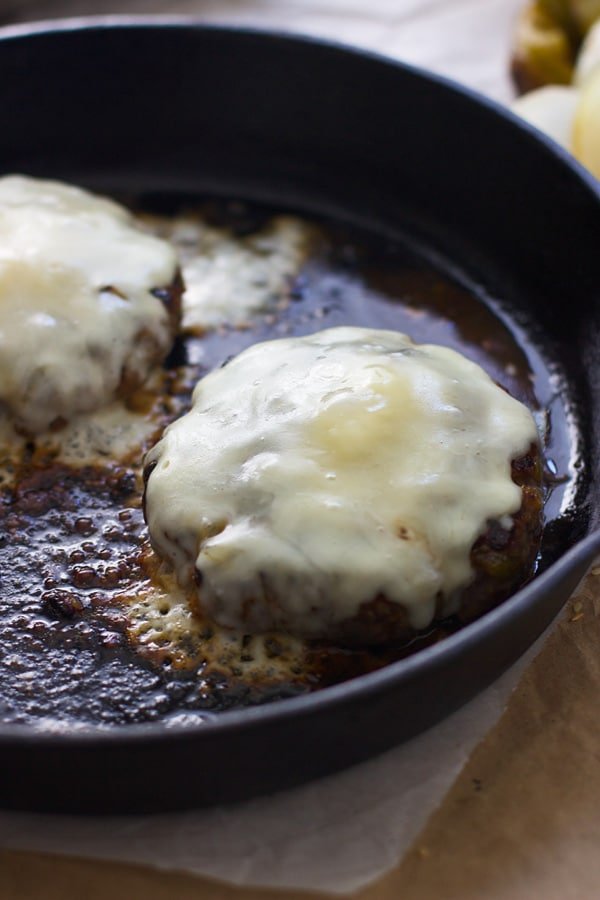 Now, I would have loved to grill these guys, but our less-than-five-year-old grill decided she wanted to quit on us a few weeks back, so I cooked these up in a cast-iron skillet, which I think actually works even better, since it gives the outside this perfectly crusty char. Once the burgers are almost finished cooking, an obscene amount of shredded monterey jack cheese gets piled on, a little bit of water is poured into the skillet, and everything is covered with a lid to quickly melt the cheese and infuse a little bit more moisture into the burgers.

Like I said before, I keep the toppings pretty simple, a little bit of leftover roasted peppers, some onion, and that’s it. Sandwich it between a toasted, buttered bun, and you’re good to go. 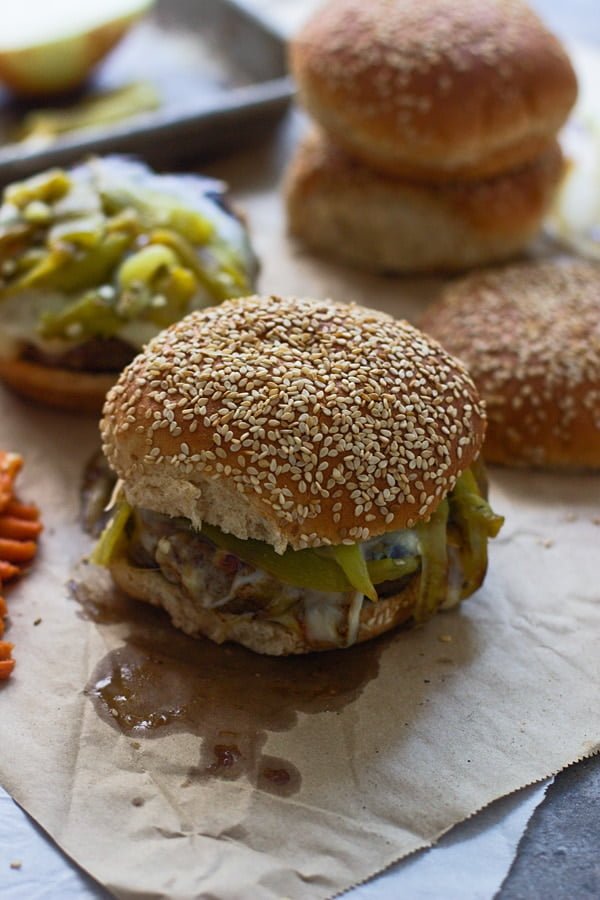