With just three ingredients and 20 minutes of time you can whip up these adorable Cinnamon Roll Sausage Mummies for your little ones! We take canned cinnamon roll dough, roll it out, cut it into strips and then wrap around fully cooked maple turkey sausage patties. We use the frosting included with the cinnamon rolls to “glue” eyes on to each mummy and then drizzle with more frosting. The perfect Halloween breakfast! 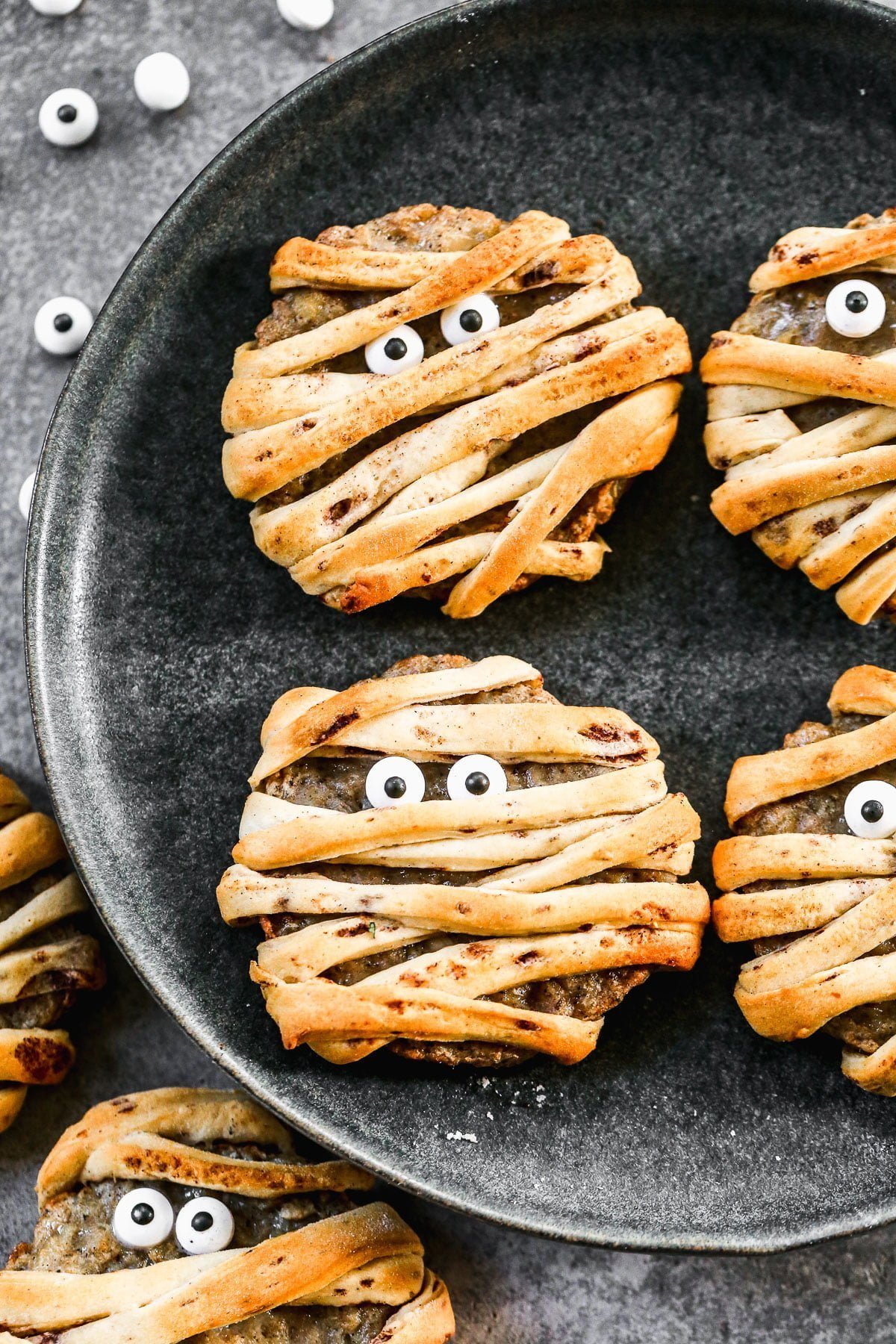 As my kiddos inch further away from the baby years and closer to the elementary school aged years they only become more thrilled with the holidays and Halloween is no exception. In the past my porch was tastefully decorated with white cinderella pumpkins and colorful mums and now (in addition to those things because I can’t give them up) bats litter our porch and witches’ hats hang from the roof. Luckily, I find myself enamored with all of it as well. So much so that the fun doesn’t end with decorations – we take it to the kitchen.

These fun Cinnamon Roll Sausage Mummies are our newest Halloween creation and arguably the easiest. We turn store-bought canned cinnamon rolls into mummy wrapping and twist them around pre-cooked sausage patties. We use the frosting that comes with the cinnamon rolls to “glue” the eyes onto to each mummy and then drizzle each creepy guy with the leftover frosting.

Serve with a side of fruit and watch your kiddo’s eyes light up! 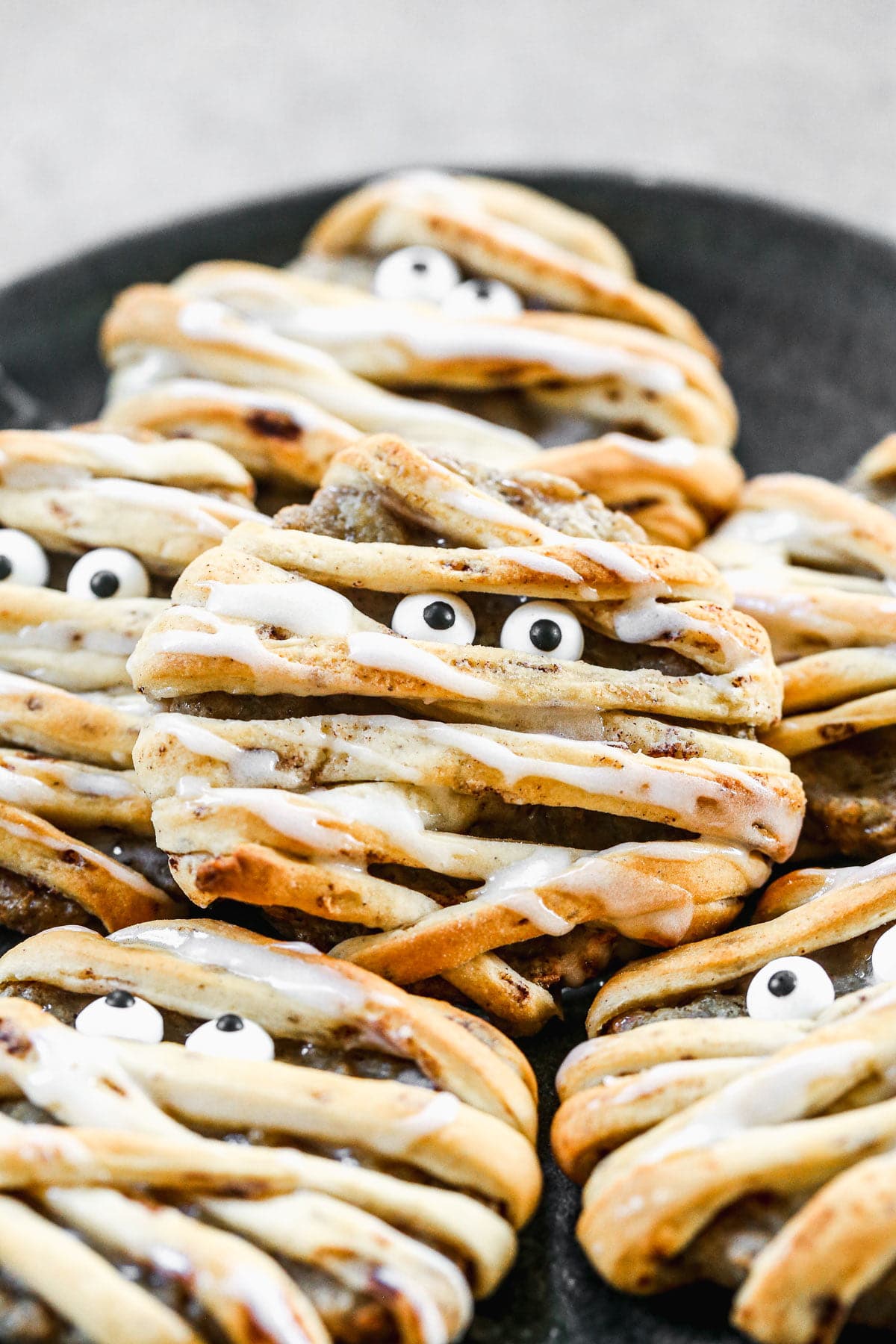 Cinnamon Roll. Sausage mummies aren’t fancy and they shouldn’t be! I have no shame in buying the canned Pilsbury cinnamon rolls. We go with the classic version and all you need is the five-count size unless you plan on making more than six mummies.

Nothing goes to waste here. We also use the canned frosting to glue the eyes on to the mummies and then use what’s leftover to frost each mummy.

Sausage. You can use any sausage patty you’d like for these. I go with an organic maple turkey sausage since it has less grease and is a little bit healthier for my kiddos. Just make sure you buy sausage that’s already cooked. If it’s not cooked the cinnamon roll wrapping will brown before the sausage can cook through.

If all you have is raw sausage patties, just cook them before wrapping.

Candy Eyes. My regular grocery store carries these cute little candy eyes but if yours doesn’t Target is a great place to look. If all else fails, Amazon is always your best friend. 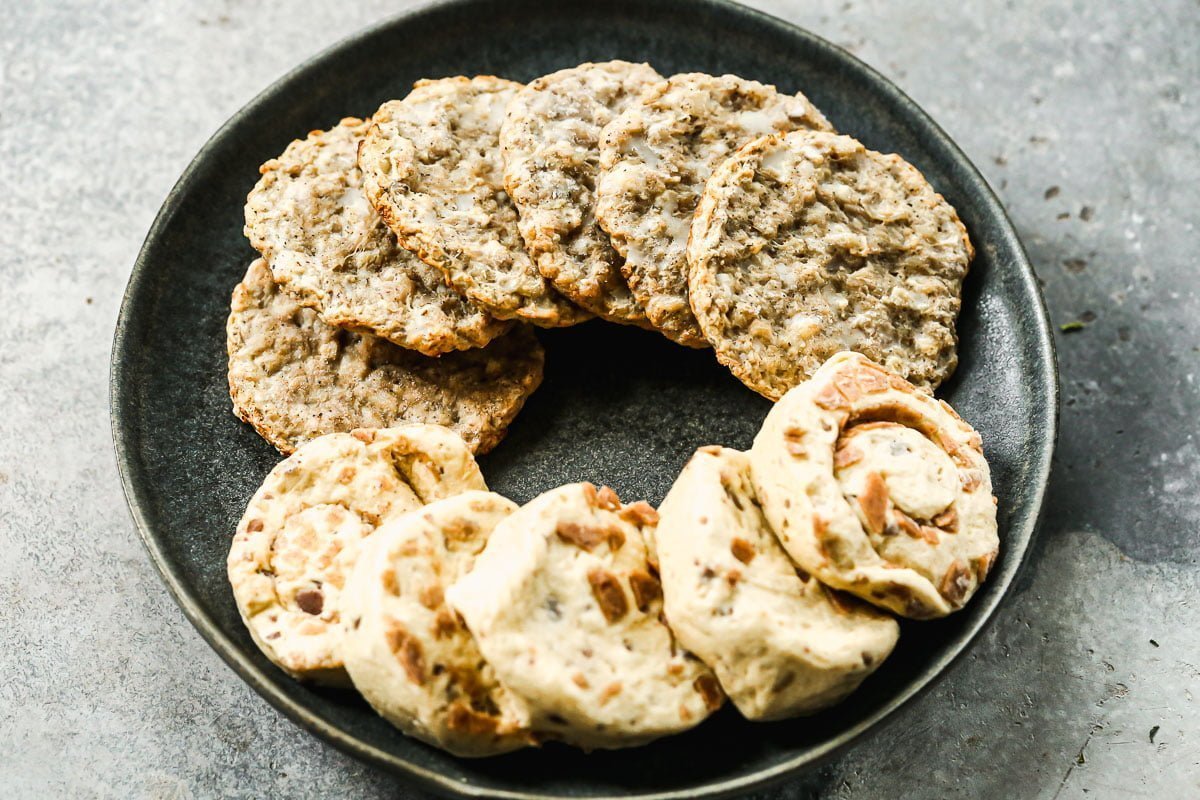 Use a sharp knife to cut each cinnamon roll into 1/4-inch strips. 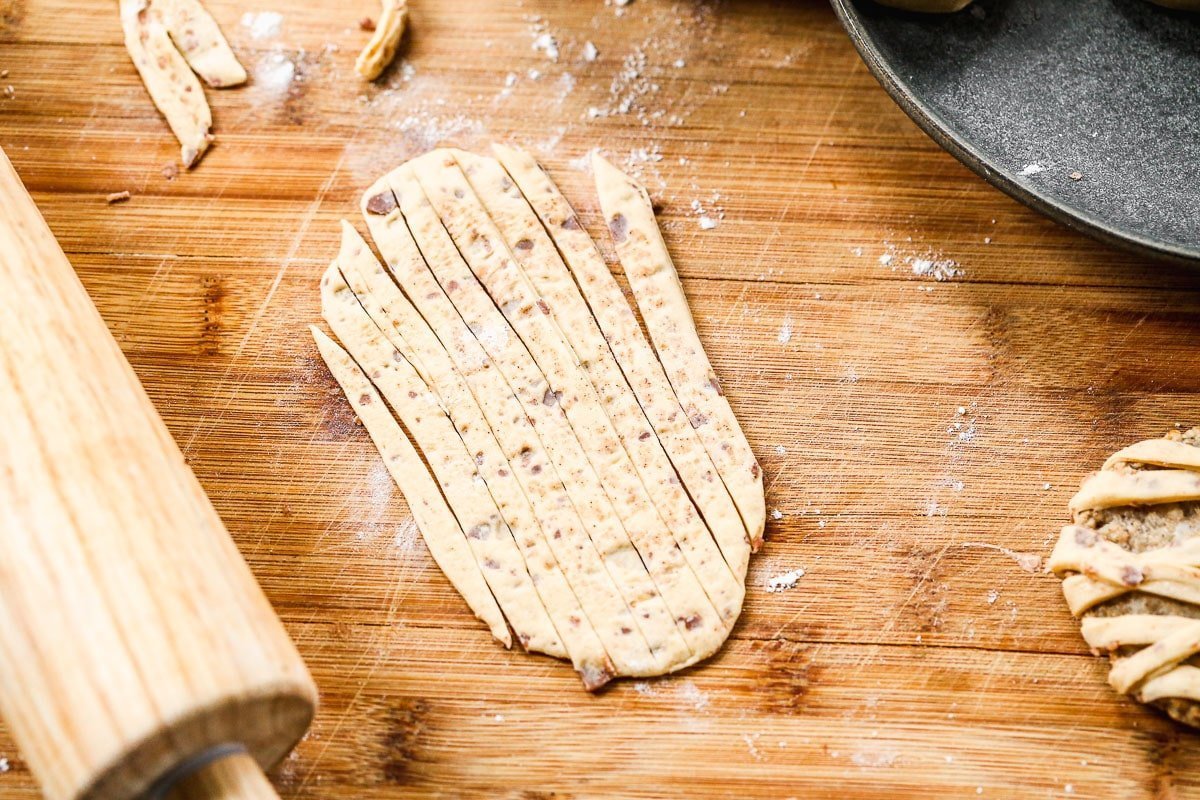 Wrap the sausage! There’s no need to defrost the sausage. They will thaw as you wrap and then cook quickly in the oven. Overlap the strips of dough around each other and secure in the back by pinch the pieces of dough together.

Make sure to leave a small strip of sausage towards the top for the eyes.

Place each mummy on a greased baking sheet and pop into the oven for 10-12 minutes or until the cinnamon roll is cooked through and golden brown. 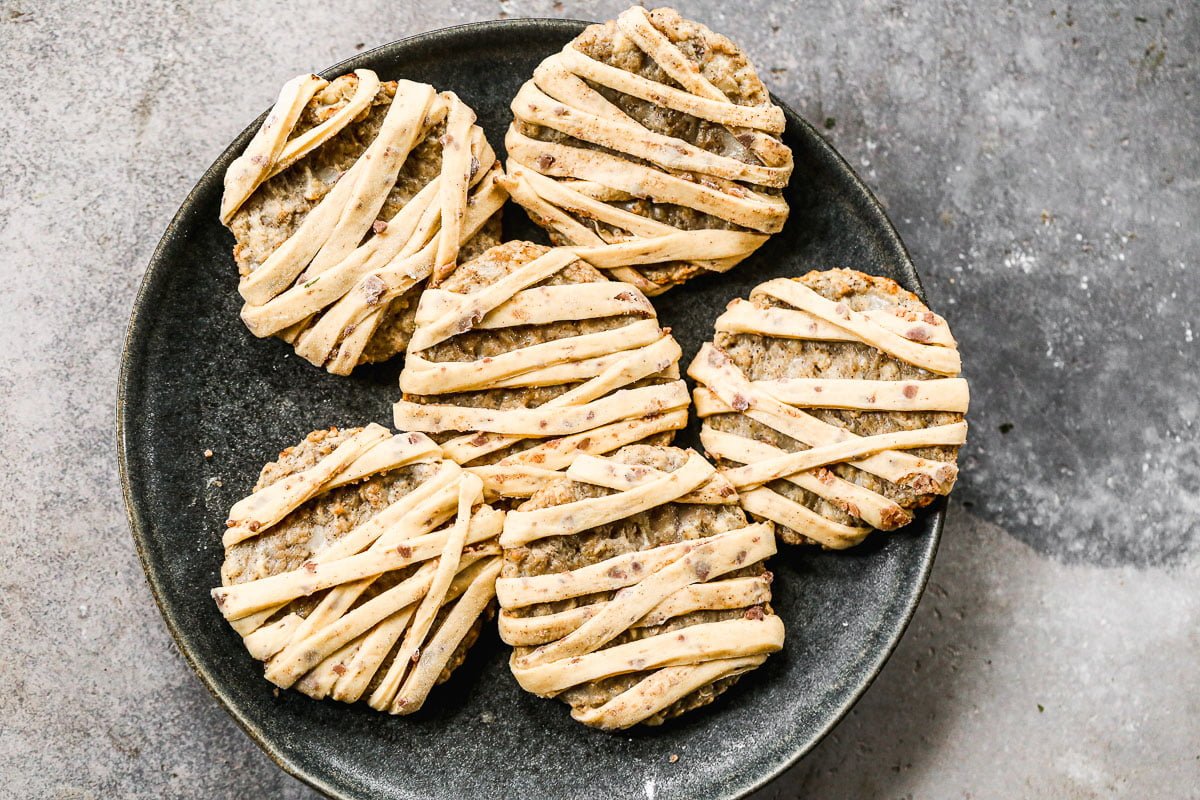 Let the sausage mummies cool for a few minutes so the eyes stick when you “glue” them down. While they cool, transfer the frosting to a small ziplock baggie. Cut the corner off. When the sausage mummies are slightly cool squeeze two dots of frosting on to the reserved strip of sausage. Top with an eye.

Drizzle the remaining frosting over each mummy. Enjoy! 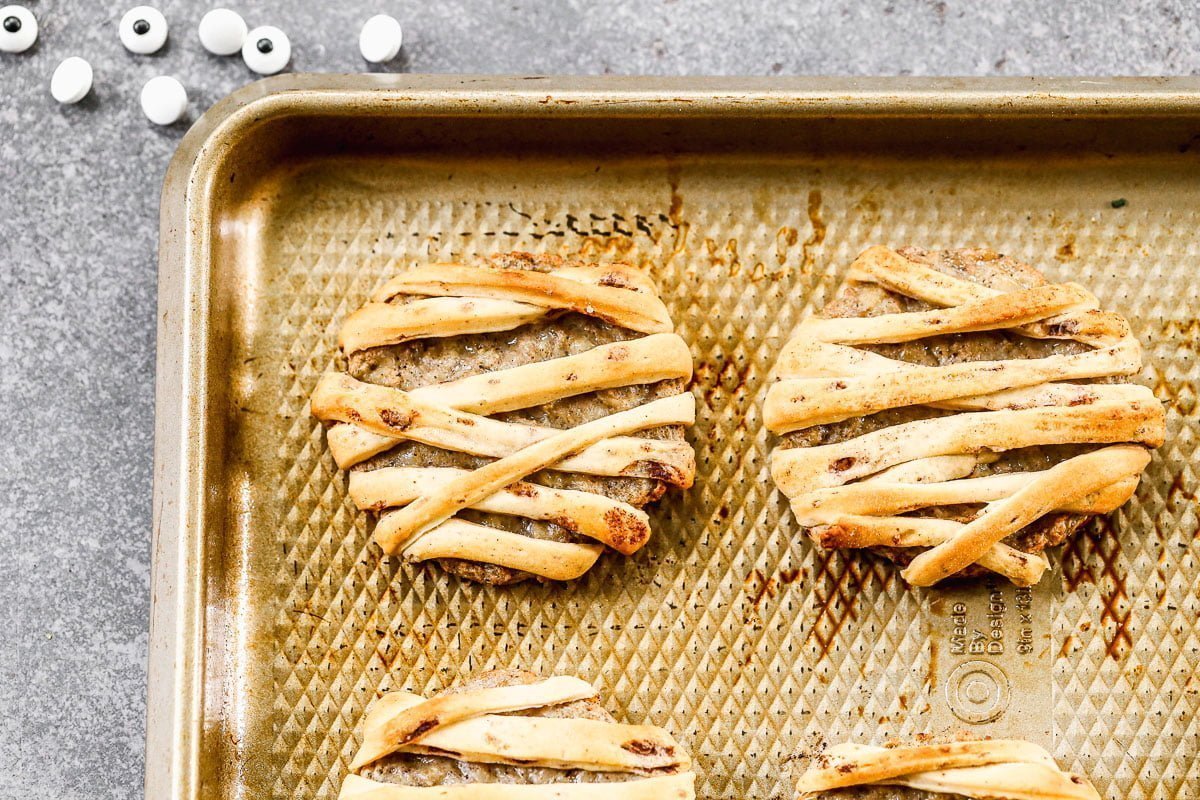 Yes! You can prep them in advance and just pop them in the oven in the morning or whenever you’re serving them. They also surprisingly reheat well in the microwave. They won’t be super crispy but the cinnamon roll will be soft and delicious. If you know you’re going to reheat the next day, wait to drizzle the frosting until just before serving. 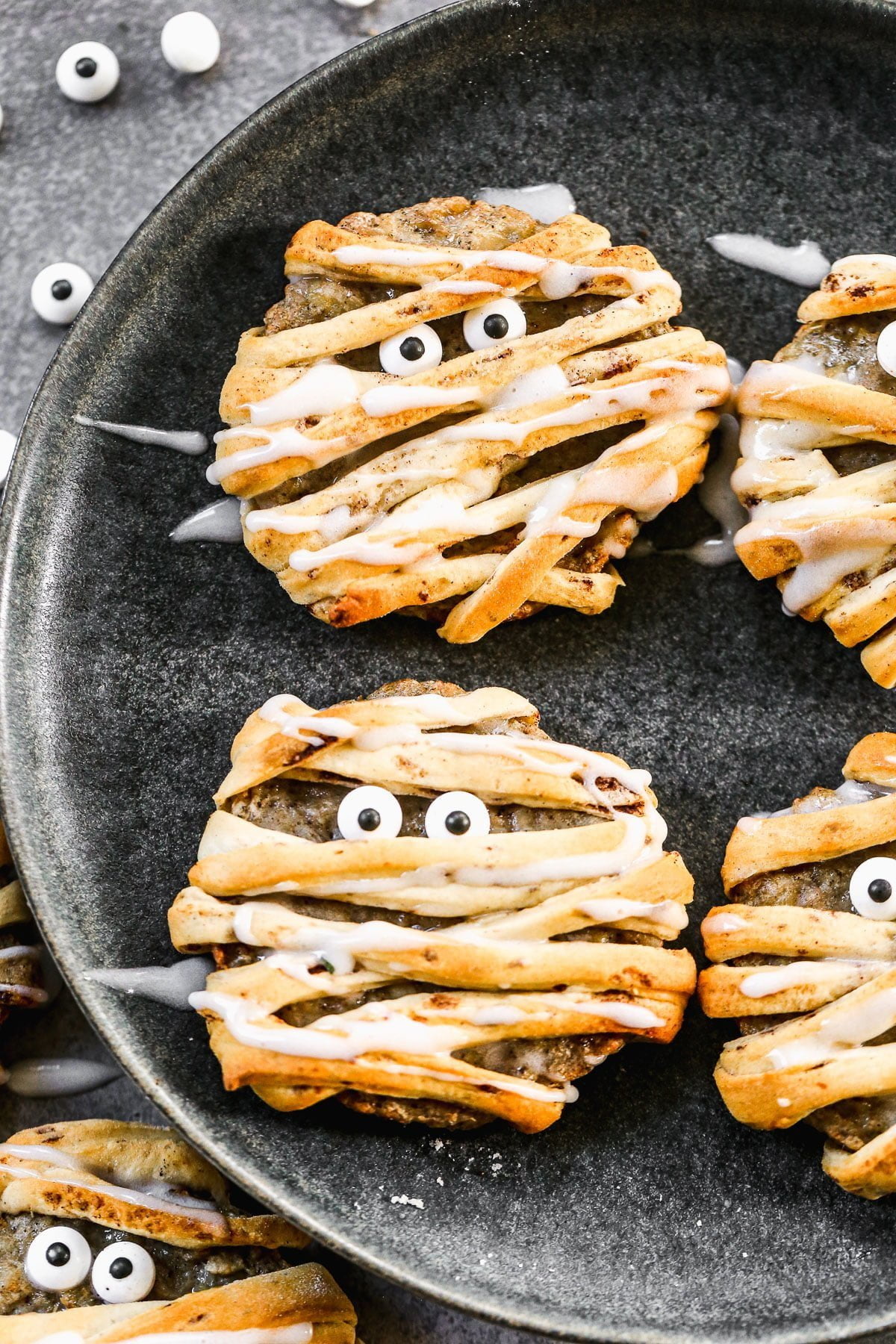 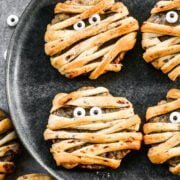 With just three ingredients and 20 minutes of time you can whip up these adorable Cinnamon Roll Sausage Mummies for your little ones! We take canned cinnamon roll dough, roll it out, cut it into strips and then wrap around fully cooked maple turkey sausage patties. We use the frosting included with the cinnamon rolls to "glue" eyes on to each mummy and then drizzle with more frosting. The perfect Halloween breakfast!