Creamed spinach gets a twist! This Creamed Spinach Gratin  gets a hit of cheesy goodness with shredded fontina and nutty parmesan. We then top it with homemade chive drop biscuits and bake. It’s the perfect addition to Thanksgiving, Christmas, or a classic steak dinner. 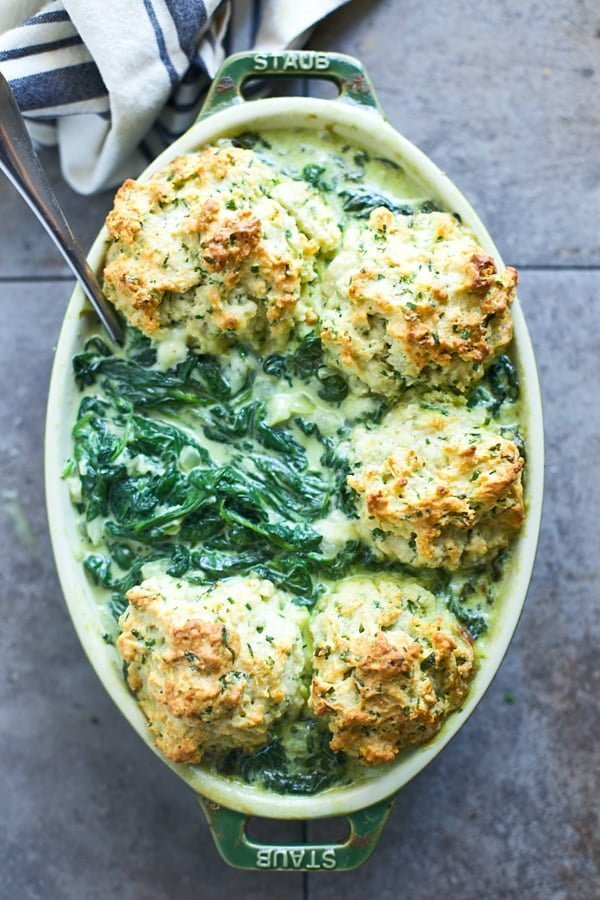 There are a lot of foods in life most people either love or hate. Oysters. Grits. Orange juice with pulp. Anchovies. Cilantro. All almost as controversial as the outcome of this year’s election…

Ok, maybe not that controversial, but close.

My mom has always loved the stuff, but everyone else in the family? Not so much. I’m not sure she has ever even made it at home, since it probably would have been met with some serious complaints. Along with a stubborn refusal to eat it from my Dad and brother, and as I’ve learned in my 10+ months as a mother, you’ve gotta pick your battles. However almost every single time it was offered as a side option at a restaurant, she would order it. It wasn’t until I was much older that I finally decided to give hers a try, and was pleasantly surprised at how much I adored it.

I love that’s it’s irresistibly creamy. I love that it’s ridiculously easy to throw together. And I love that it makes me feel like I’m secretly eating healthy since it’s packed full of nutritious spinach. 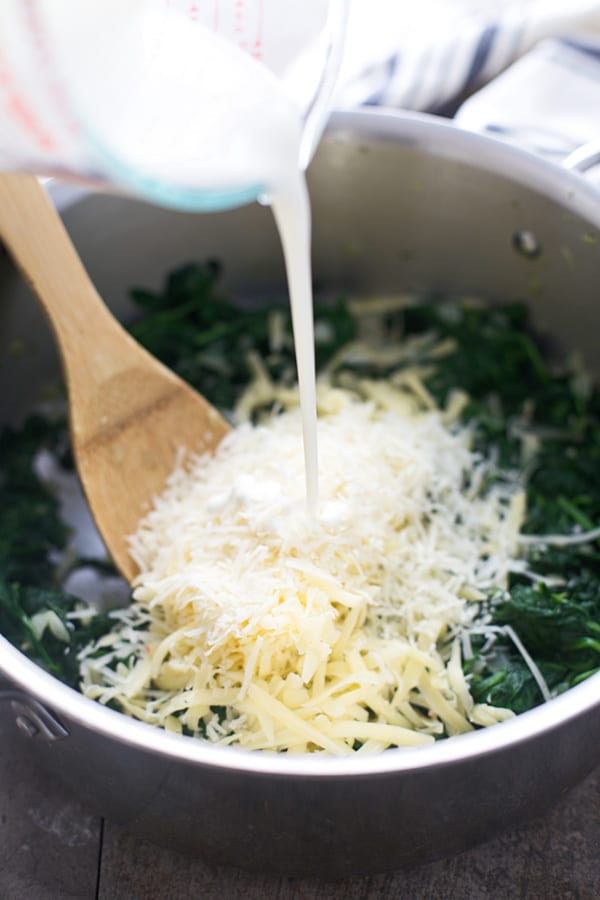 What is creamed spinach?

Typically in a classic creamed spinach, the recipe is exactly what the name implies, spinach with cream in it. There’s also usually hints of nutmeg to compliment the spinach and cream, and maybe some garlic sprinkled throughout.

Because I love to change things up a bit, I thought it would be fun to dot biscuit dough on top, throw a copious amount of cheese into the mix, and call it a spinach gratin.

Which brings us to, What is a spinach gratin?

In its simplest definition, a gratin is a casserole that’s topped with cheese, or some type of crust and baked. In this version, we have both the cheese part of the equation and the bread topping, so it only makes sense to call this cheesy creamed spinach, a creamed spinach gratin.

Spinach. Lots and lots of spinach. Because spinach cooks down so much, you’re going to need quite a bit. It will look like it won’t cook down, but trust me it will.

Onion and garlic. A little bit of onion and garlic go a long way here in adding just the right amount of flavor to the base of the creamed spinach gratin.

Cream. What’s a creamed spinach gratin without a little bit of cream? Heavy cream is what you’ll need here, and if you want something truly luxurious, I suggest you stick with it.

Cheese. I love the combination of fontina and parmesan cheese here. Fontina has a subtle nutty flavor which I love, and it melts beautifully in this spinach gratin. Parmesan cheese adds another, heavier dose of nuttiness and it is the perfect compliment to spinach.

Seasoning. All you need is plenty of salt and just a little bit of nutmeg.

The dry ingredients. Flour, salt, and baking powder, and a little bit of baking soda.

Herbs. Chives and parsley. I love the subtle onion flavor chives give the drop biscuits. Parsley adds another touch of freshness and color.

Butter. You can’t make biscuits without a little bit of butter. When I usually make biscuits, I want the butter super cold to create a flaky, tall biscuit. Here, it doesn’t matter as much because you want that dropped biscuit look, so we’re using melted butter.

Buttermilk. Always my preferred liquid when it comes to biscuits. 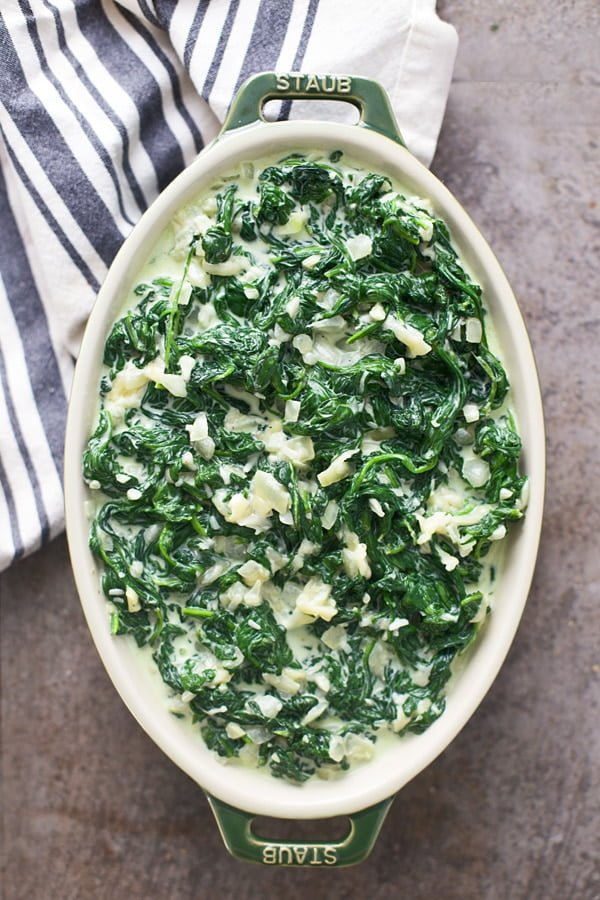 How to make Creamed Spinach Gratin

Cook down the spinach. Add the spinach. I know it looks like it won’t cook down, but trust me, it will. Add it a few handfuls at a time until it starts to wilt, then add the next batch.

Add the cream and cheeses. Once the spinach wilts down, add the cream. Continue to cook for 1-2 minutes. Turn off the heat and add the cheeses. Toss until they’re combined.

Season. Add the salt and nutmeg. Season to taste to see if it needs any more salt. Pour the creamed spinach into the prepared casserole dish and top with biscuits.

Add the flour, baking powder, baking soda, and salt to a medium bowl. Whisk to combine.

Toss in the herbs. Add in the chopped chives and parsley. Whisk until the herbs are evenly dispersed.

How do I make this in advance?

You can make creamed spinach gratin up to two days in advance. Here’s how to do it:

Subustitutions and Tips and Tricks for Recipe Success

What to serve with Cream Spinach Gratin

If you’re making these for Thanksgiving, then of course, you’re going to need other sides. These Creamy Dreamy Mashed Potatoes are our go-to mashed potato recipe. If you’re craving something a little untraditional, look to our Loaded Baked Mashed Potatoes. These babies taste just like a loaded baked potato, but in mashed potato form. 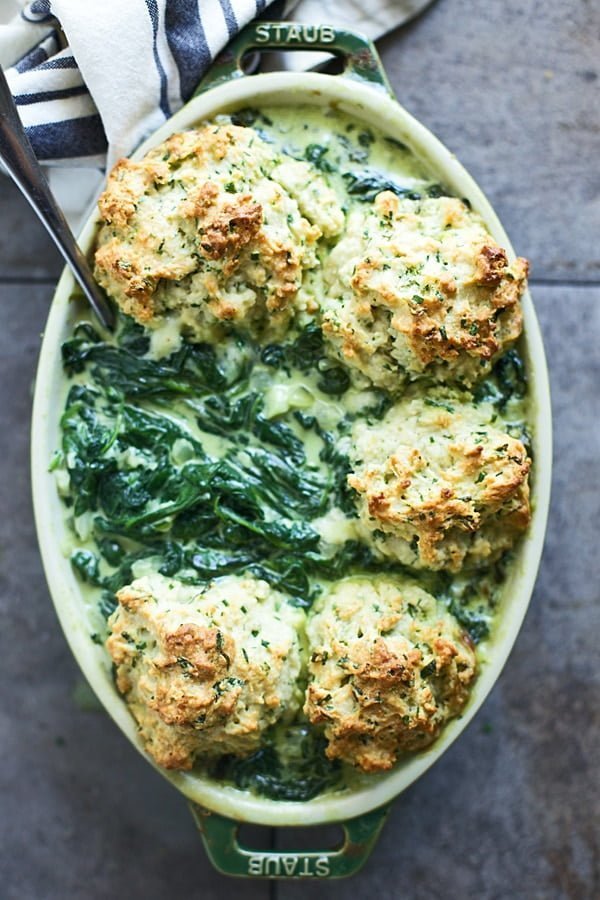 Print Rate Email
Creamed spinach gets a twist! This Creamed Spinach Gratin  gets a hit of cheesy goodness with shredded fontina and nutty parmesan. We then top it with homemade chive drop biscuits and bake. It’s the perfect addition to Thanksgiving, Christmas, or a classic steak dinner.
Prevent your screen from going dark
6 people