If you love General Tso Chicken, then you’ll love this Healthier General Tso Shrimp. Plump shrimp are baked alongside fresh broccoli florets and then tossed with a quick soy, hoisin and red Chile sauce. Saucy, spicy, and so delicious! Oh, and everything is cooked on one pan. 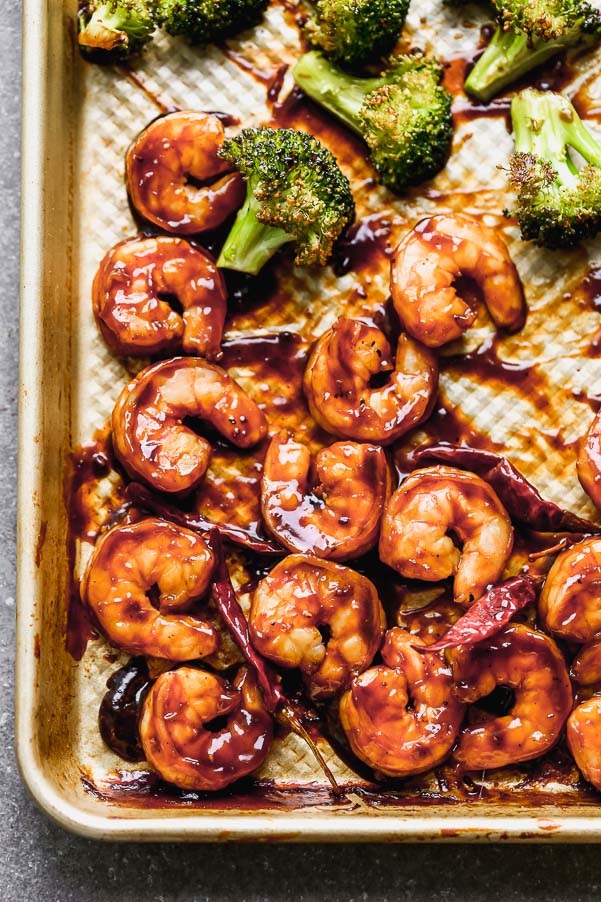 When it comes to ordering Chinese takeout I always get the following items:

I know it’s basic, but it never lets me down. I’ve been wanting to come up with a healthier version for eons and I finally have it.

We swapped out the tender fried chicken for plump roasted shrimp – less calories, more flavor. We stuck with the same sweet, spicy sauce that’s become synonymous with general tso chicken, and is just generally, addictive (we used something similar in this Shrimp Ramen Recipe).

It’s a combination of salty tamari, sweet sugar, and super spicy red chiles. The sticky sauce is tossed with the shrimp and everything is served with tender roasted broccoli. Sesame oil. Instead of using a neutral oil, I like to use sesame oil to cook both the broccoli and the shrimp. It adds a subtle amount of flavor without adding any additional fat later.

Broccoli. I don’t know how your local restaurant does General Tso shrimp or chicken, but mine always serves it with steamed broccoli. While I love broccoli, steaming it isn’t my favorite way to eat it. Here, we roasted the broccoli just before roasting the shrimp to add an extra layer of flavor to the finished product.

Shrimp. General Tso Shrimp wouldn’t be completely without shrimp. Obviously. I like to use 1 1/2 pounds of large shrimp that have already been deveined. If you want to save a few bucks, peel and devein them yourself.

Tamari. We’ve talked about tamari before, but it’s basically soy sauce without the wheat. It has a deeper, less in-your-face salty factor to it, and it’s what I primarily use these days. If you all you have is soy sauce, that will work just fine as well.

Hoisin. Hoisin is basically the ketchup of Asian ingredients. It has a thousand ingredients in one tiny jar, and it’s pretty much the tastiest thing on the planet. It’s a combination of fermented soy beans, red Chile pepper, garlic, vinegar, and honey. Sounds like a strange combination, but it works.

Rice Vinegar. Rice vinegar adds a nice acidic note to the general tso shrimp sauce. If you don’t have it, you can replace it with regular white vinegar or apple cider vinegar.

Brown Sugar. You can really use any type of sugar here, but I personally love the more molasses-like taste brown sugar has.

Cornstarch. Cornstarch is used to thick the sauce. Once it hits the hot pan and shrimp, it immediately thickens the sauce.

Chicken stock. You need little bit of liquid to dilute some of the flavors. You can also use water if you don’t have chicken stock. 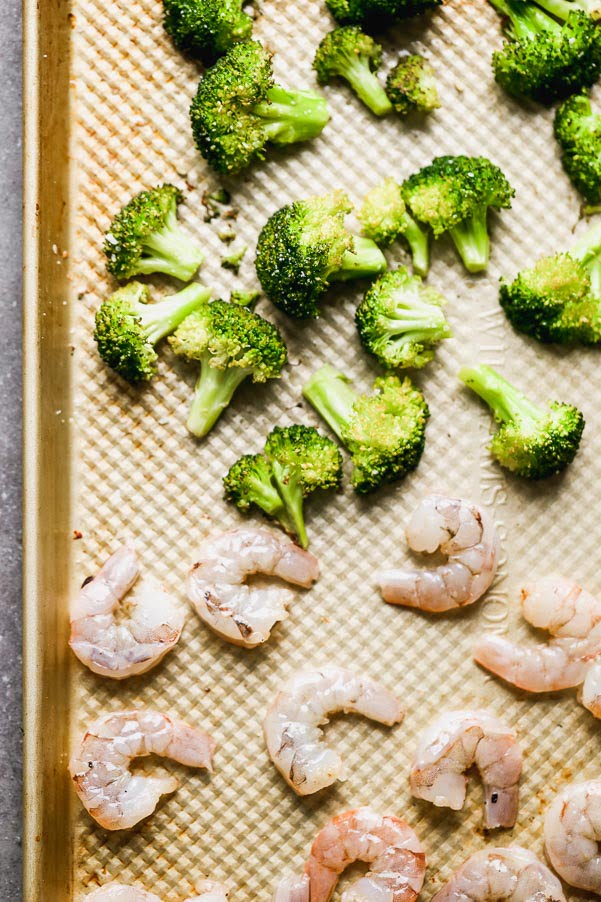 Spread the broccoli on to a baking sheet and roast in the oven for 10 minutes.

Make the sauce. While the shrimp cook, whisk the sauce together in a small bowl.

Toss with the sauce. Pull the pan out of the oven and pour the sauce over the shrimp. Use a spoon to coat the shrimp. Place back in the oven for 3-4 minutes until the shrimp are cooked through and the sauce has thickened.

Serve. Pull the pan out of the oven and toss the shrimp with the thickened sauce. Serve the shrimp over steamed rice with the broccoli on the side. Can I use chicken instead of shrimp?

If general tso chicken over general tso shrimp is your thing, you can of course, use chicken. You will need to adjust the amount of time it takes for the chicken to cook. I’d roast the chicken before, as we do with the shrimp, but cook it all the way through before adding the sauce.

General Tso Shrimp is super quick and easy to make, so you really don’t need to make it in advance. If you HAVE TO, slightly undercook the broccoli and shrimp. Reheat everything on a sheet pan JUST until it’s warmed through. Shrimp overcook very easily, so just be aware that if you make it ahead, your shrimp could possibly get rubbery and tough.

Note, we did try this and it was just not as good as fresh. The sauce will thicken up a little bit too much and the shrimp, of course aren’t as tasty as they are straight out of the oven. Just keep that in mind when preparing general tso shrimp ahead of time.

Ok, this may seem silly, but I feel like there’s a lot of people out there that don’t know how to pronounce general tso shrimp. Basically all you need to do is drop the “T” from the sound. So, General Tso Shrimp, is pronounced General SO shrimp. Got it?! 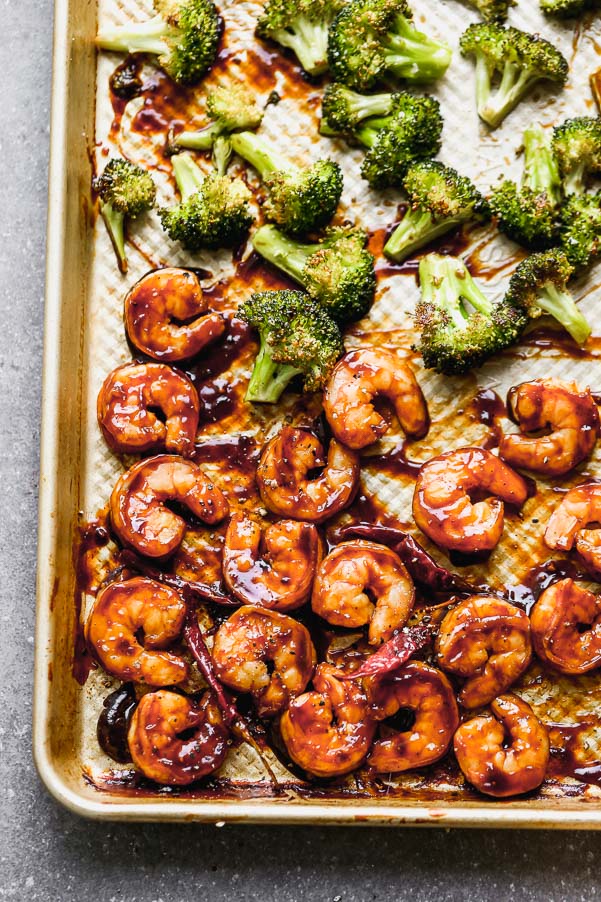 What to serve with General Tso Shrimp 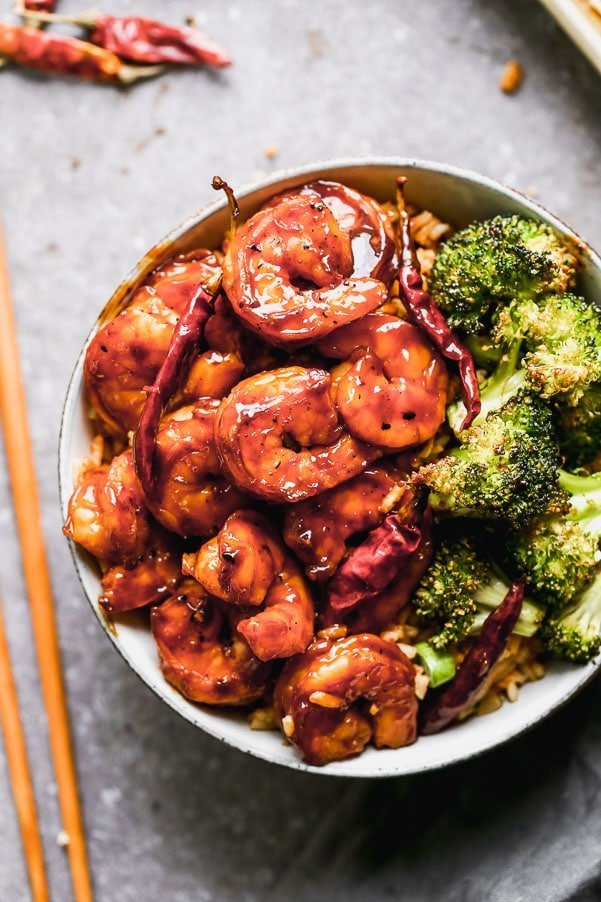 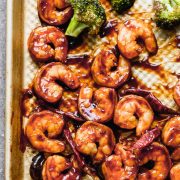 If you love General Tso Chicken, then you'll love this Healthier General Tso Shrimp. Plump shrimp is baked alongside fresh broccoli florets and then tossed with a quick soy, hoisin and red Chile sauce. Saucy, spicy, and so delicious!