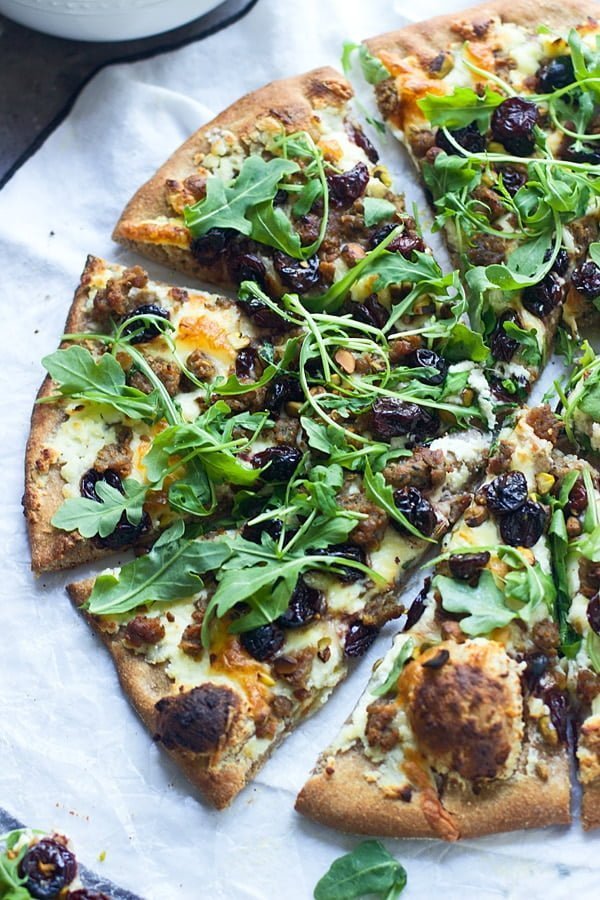 I’m sorry. If you’re a regular reader, you might have noticed things have been rather quiet around here the last couple weeks. I took Teddy on his first beach vacation with Kevin’s family, so I decided to take the week to unplug and truly soak up the time with my approaching-three-month-old baby boy. Little did I know that my website would basically collapse on itself soon after I retuned, so what was just meant to be a brief pause in programming turned into an almost two-week long hiatus in which I was frantically trying to figure out what was wrong. After many rounds of the blame game between my host, security and AT&T, I found out that I was the culprit. Go figure.

Anyways, it was a frantic week to say the least…

But. At least there’s pizza, right? 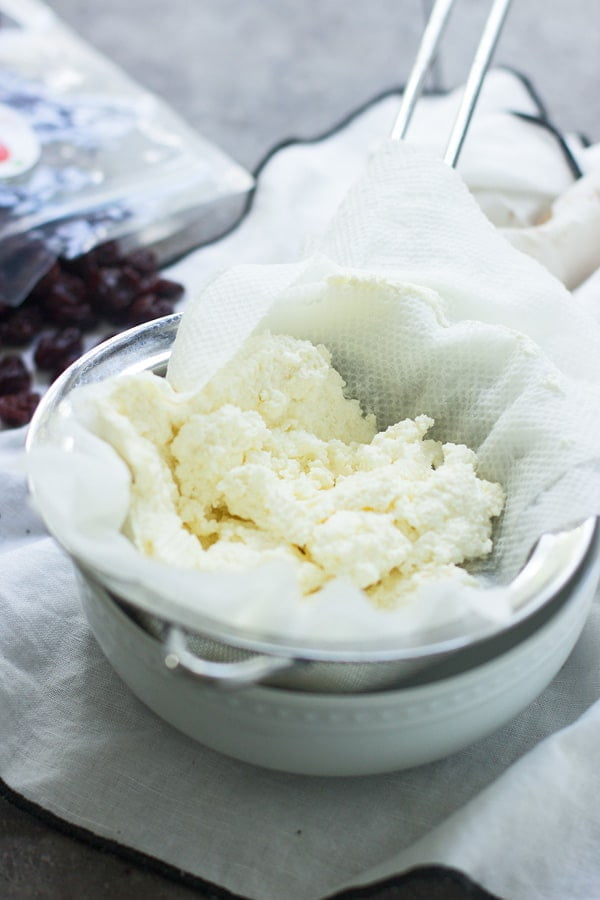 I’ve gotten into this bad habit lately where I consume pizza far too often than I actually care to admit, and I justify it by telling myself I’m nursing, so it’s ok. It’s not ok. Hence why I still have 12 pounds of baby weight to lose. Whoever said you can eat whatever you want while breastfeeding is a liar. Clearly, that little revelation isn’t going to stop me, because I don’t plan on giving up pizza anytime soon, as evidenced by the pizza I’m sharing with you today.

The base of the whole pizza is ricotta cheese which happens to be homemade, and while a store-bought variety would work, in my opinion there’s really nothing like homemade ricotta, and it’s SO easy to make. In this version, I used part whole milk and part heavy cream, but if all you have on hand is whole milk, that can work too. Literally all you do is bring the milk and cream to a boil, stir in some vinegar (you can also use lemon juice) and watch the magic happen. You dump everything into paper towel-lined sieve, and almost instantly you have ricotta cheese. 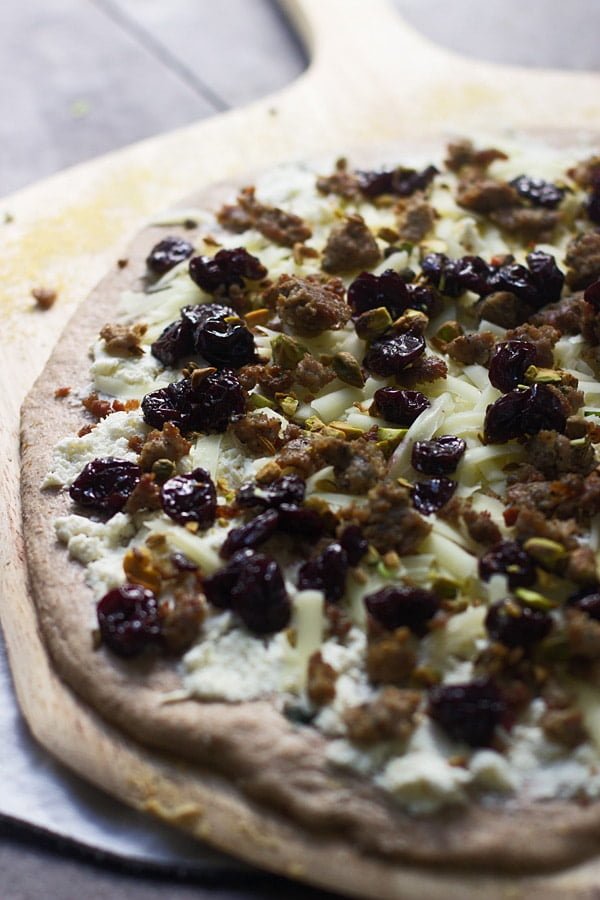 The next high-maintenance part is the cherries, which also happens to be a super easy step, but just requires a bit of extra time. To give them a little bit more oomph, and to plump them up a bit I simmer them in red wine (any light red will do), until is reduces and becomes almost syrup-like.It’s a little trick I learned in Michigan last summer when I was knee-deep in tart cherry talk. 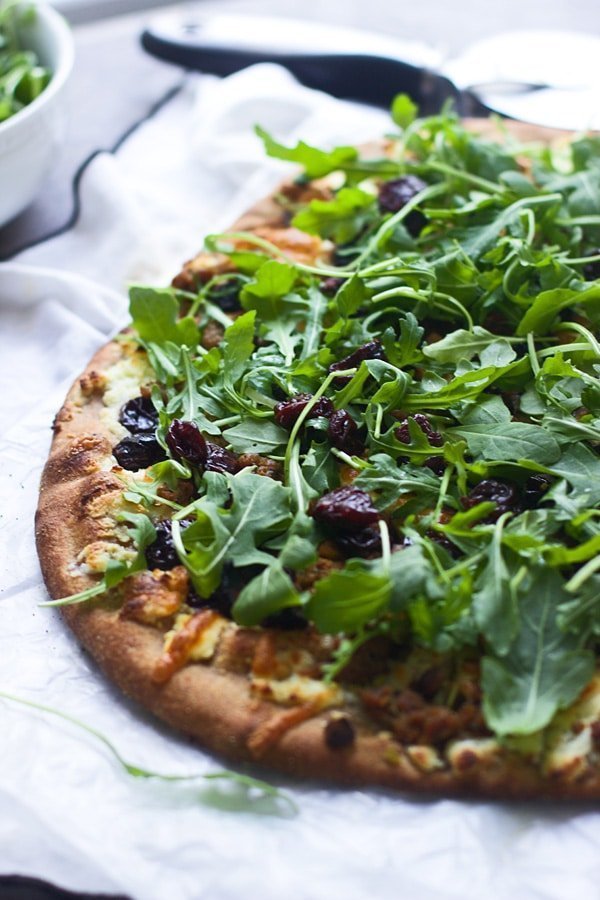 The rest of the assembly is pretty straight-forward. The ricotta gets smothered across a store-bought pizza crust (You have to have a break somewhere), is dotted with the red-wine cherries, and is covered in shredded mozzarella, chopped pistachios for crunch, and turkey Italian sausage because Kevin can’t eat pizza without meat (or so he says). It’s popped into a super hot oven for just a few minutes, and then once it’s done cooking, peppery arugula is sprinkled on top.

This is what I like to call a fancy schmancy pizza… 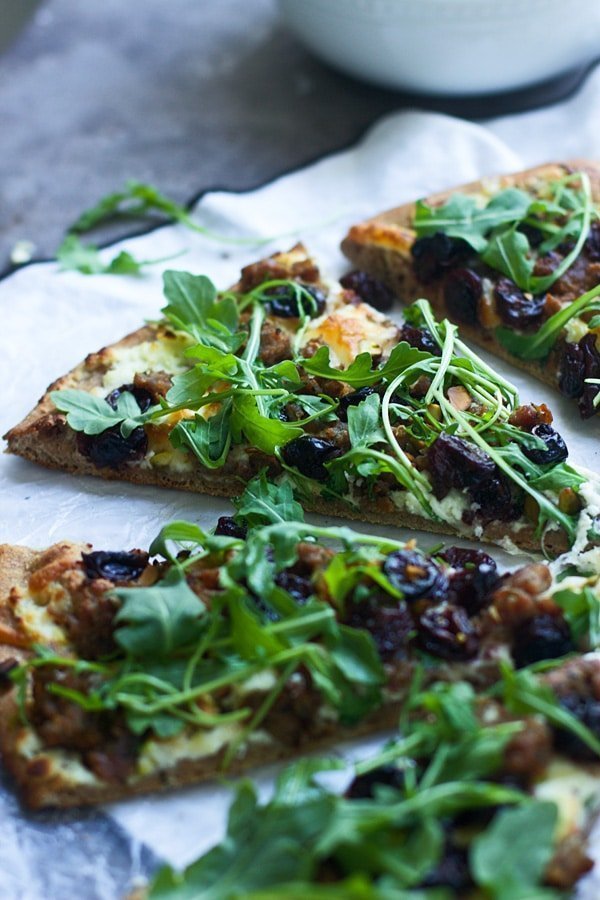