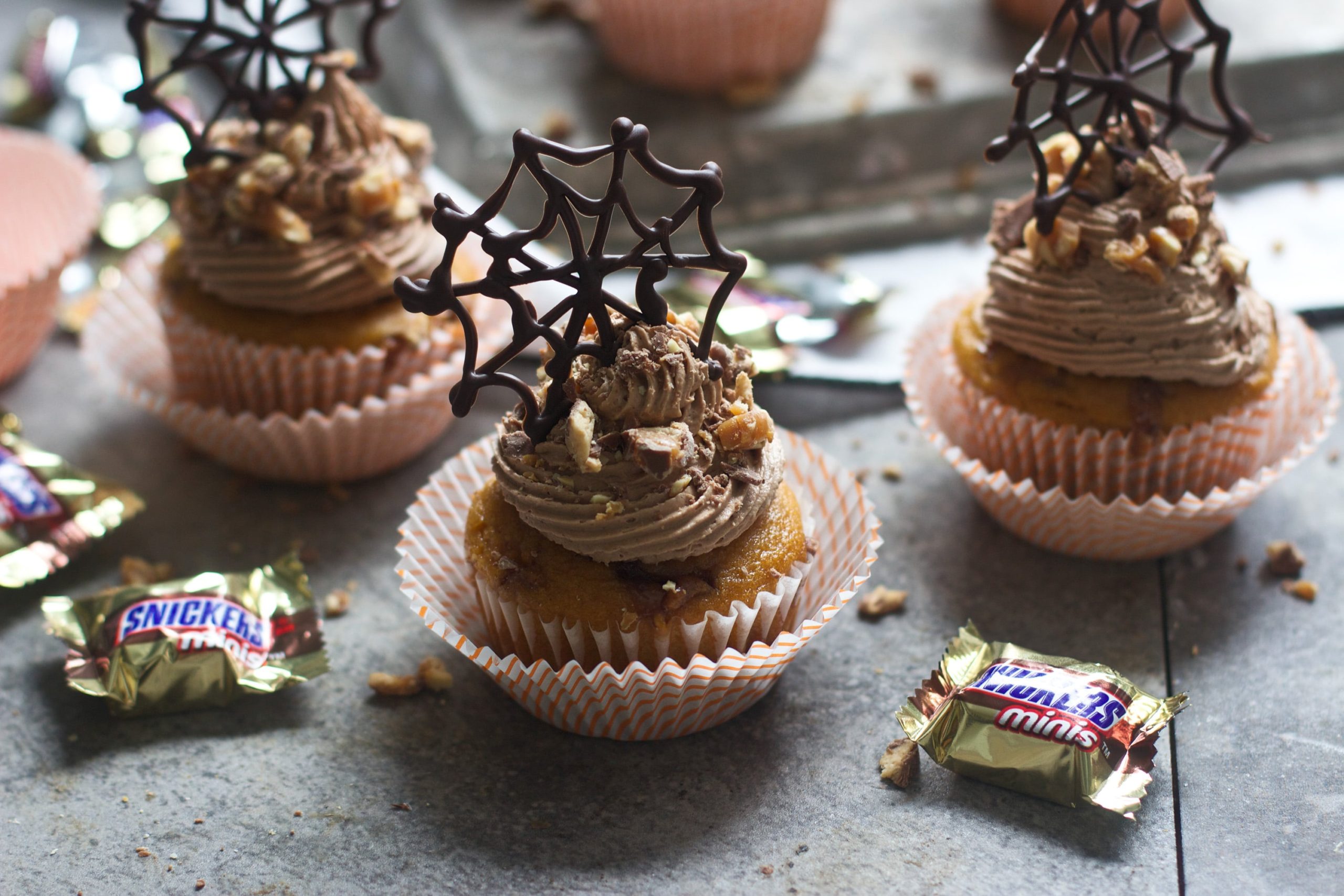 What is everyone’s favorite part of Halloween, whether you’re a child or an adult? 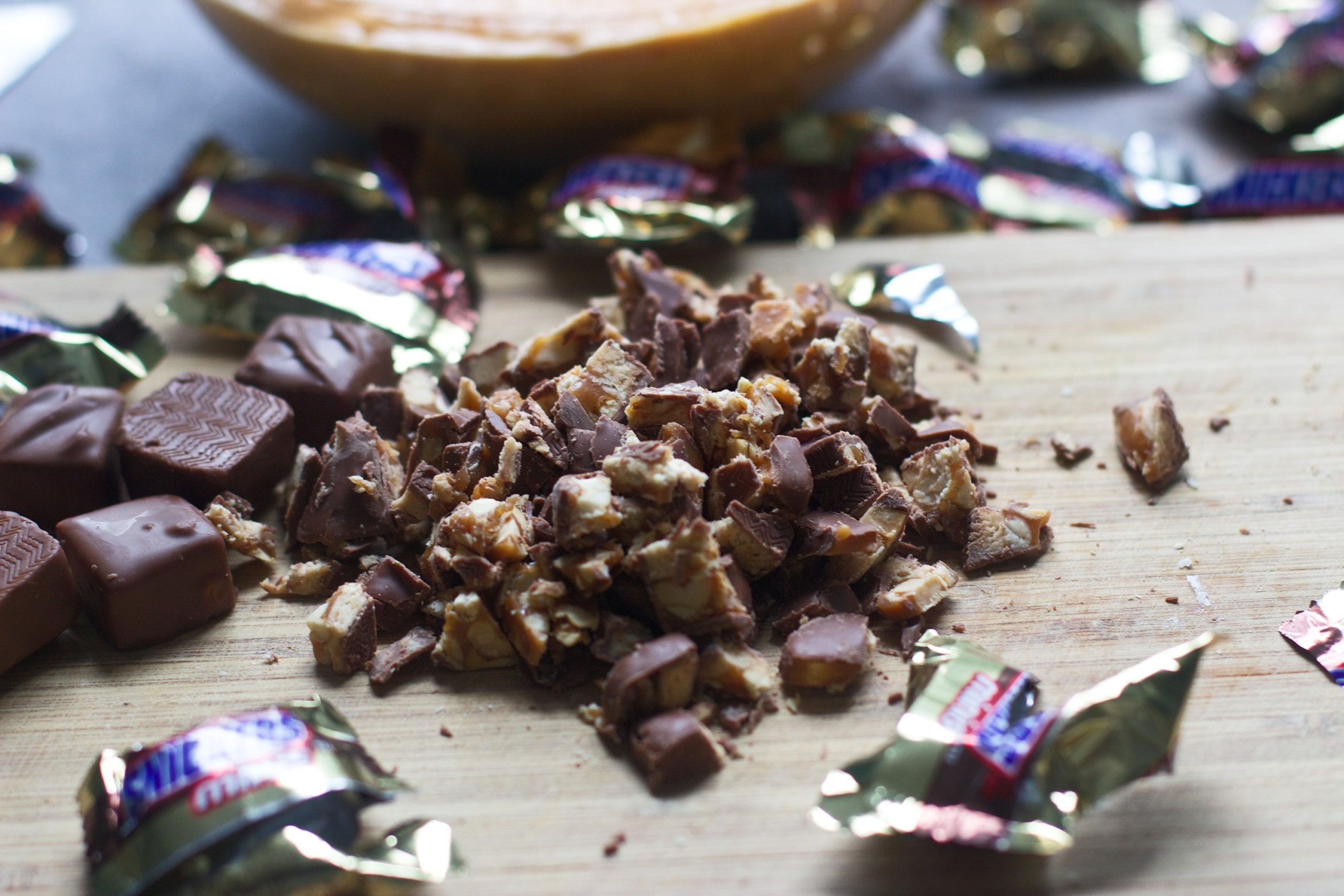 I hope you didn’t have to think twice about that – obviously, it’s got to be the candy.

Following in line with the rest of the world, the candy was always what I looked forward to the most as a kid, and really, as an adult, even though I don’t lust after it as much I used to, it’s also what I look forward to the most. With the except that now, instead of consuming 500 pounds of candy, one piece repeatedly after another, I try to use the candy in creative out-of-the-box ways so I only inhale 200 pounds of candy by itself. Restraint at its finest… 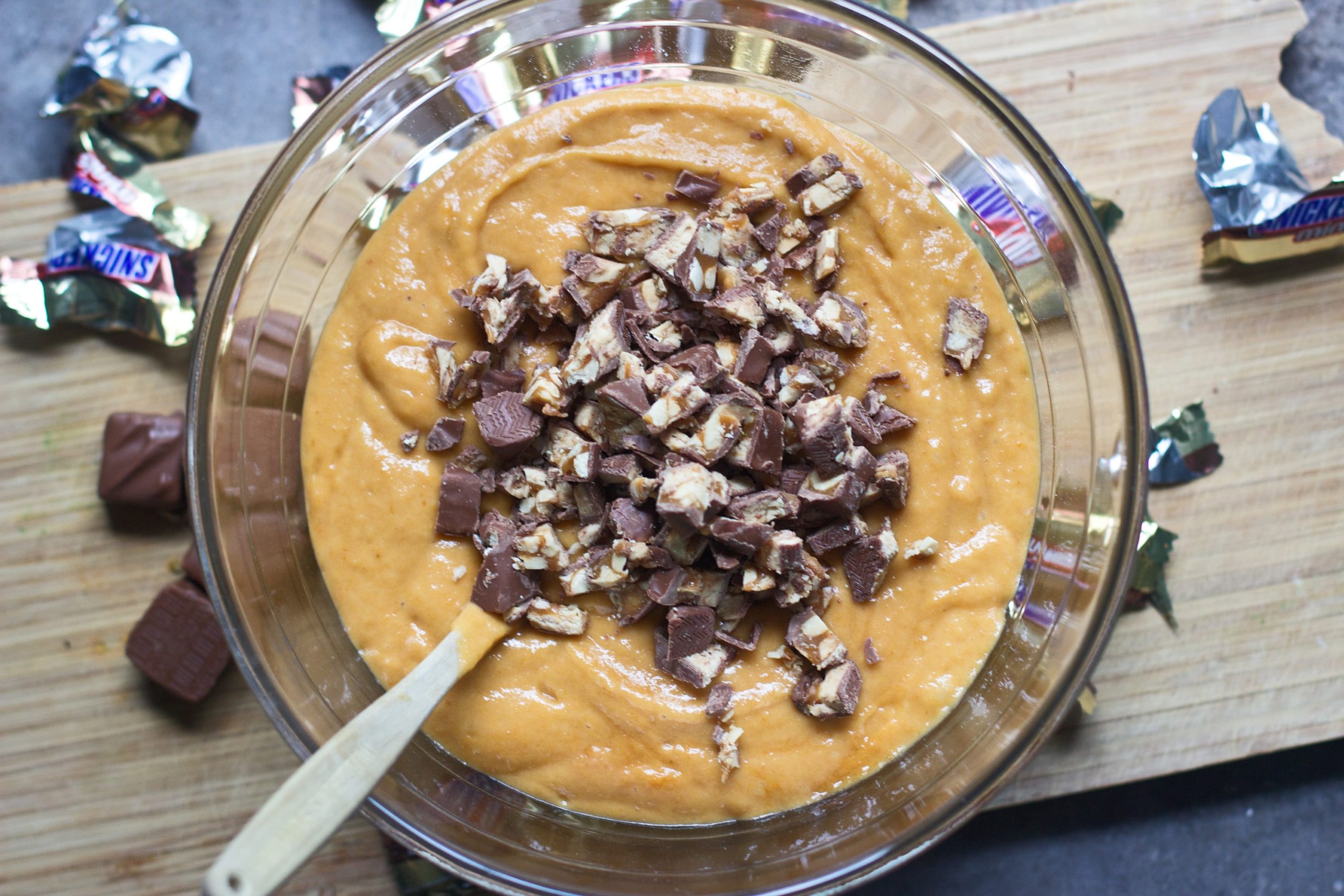 Here, cupcakes with a creepy chocolate spiderweb and a Snickers topping appeal to the kiddos, while a moist pumpkin cake and luscious chocolate buttercream frosting reign in the adults. These Snickers pumpkin cupcakes are a win for Halloween lovers of all ages. They’re absolutely perfect for a Halloween soiree, too.

Admittedly, the chocolate spiderwebs require a tiny bit of time and patience, but making them couldn’t be simpler. All I did was look up a simple spiderweb template on the Internet, trace it onto a piece of white paper, then place a piece of parchment paper on top. I melted some dark chocolate, but you can use whatever kind you prefer. I spooned it into a zip-lock baggie, snipped the end off and piped the chocolate onto the parchment paper. The shapes are popped into the fridge to chill until right before the cakes are served. 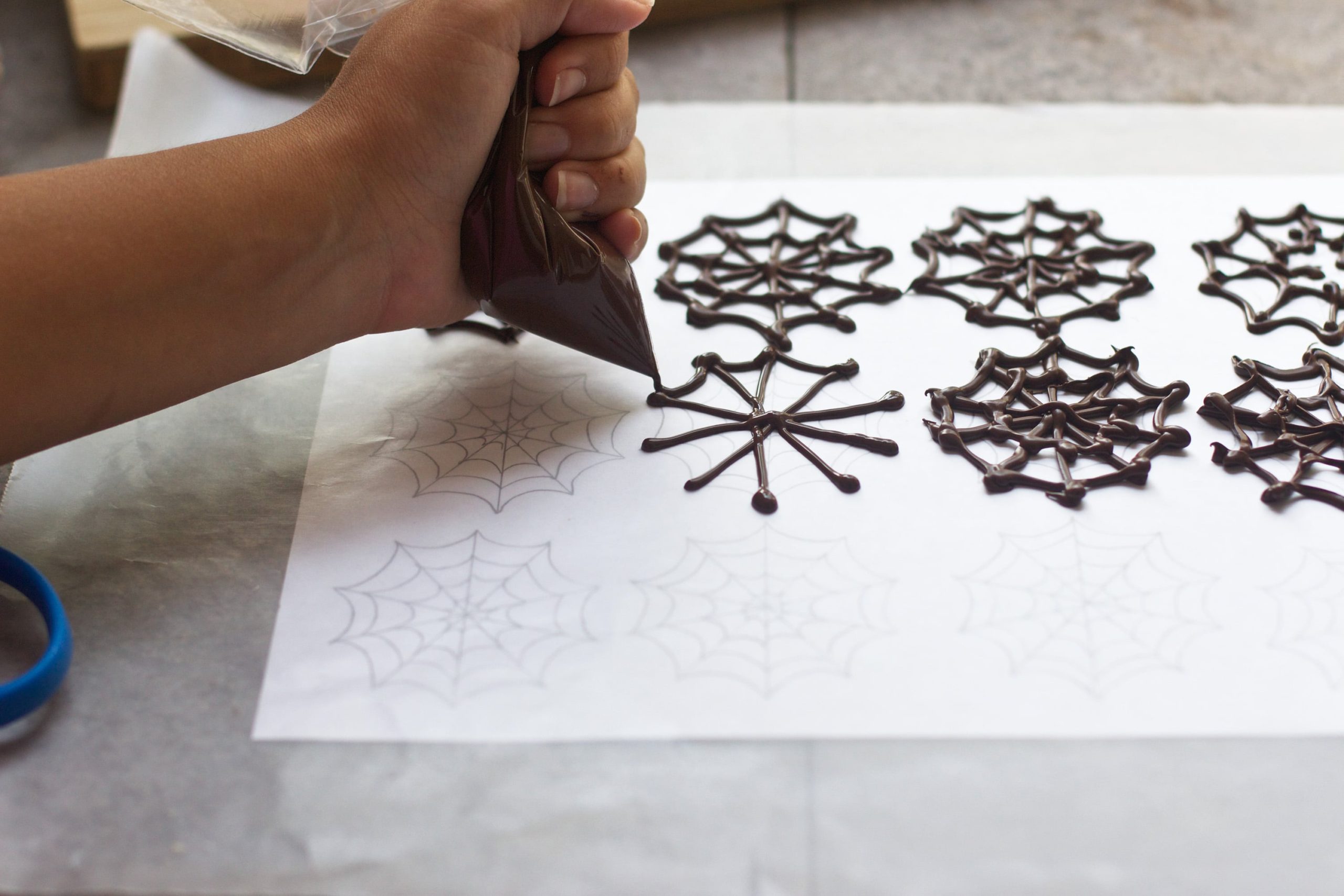 A quick tip on the spiderwebs: Be sure to work fast or the chocolate will harden. I actually like to work in two batches so if the chocolate does harden before each web can be piped, I can just pop the bowl with remaining chocolate into the microwave a second time to melt again.

Make sure you head to the Inspired Gathering section over at Kroger to check out this recipe along with a bunch of other fun, seasonal recipes and ideas! 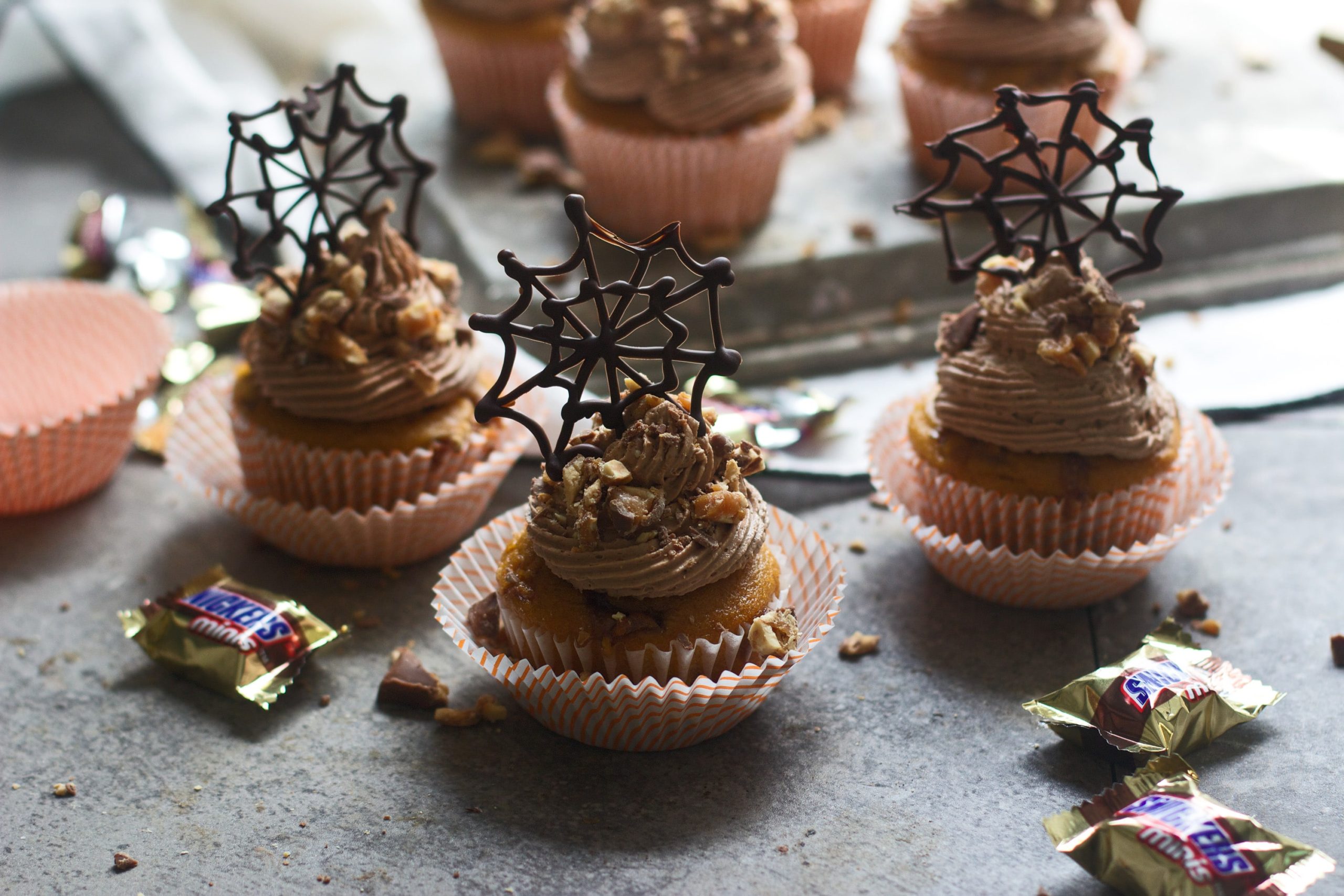 5.0 from 1 reviews
Pumpkin Snickers Cupcakes with Chocolate Buttercream and Edible Spiderwebs
Print
Prep time
35 mins
Cook time
22 mins
Total time
57 mins
Serves: 15
Ingredients
For the chocolate buttercream frosting:
Instructions
Notes
The cupcakes can be made up to two days ahead. Just store them in an airtight container, pop them in the fridge, then bring to room temperature before serving.

The chocolate spider webs may also be made up to one day ahead. Store them on a baking sheet on parchment paper in the freezer.
3.3.3077

This content was created in partnership with Kroger Family Stores using free products provided by Kroger, thank you for continuing to support the brands that keep Cooking for Keeps afloat!