Healthy Chicken Tetrazzini Recipe. I don’t think I’ve seen more beautiful words. Tender chicken, sweet peas, and savory mushrooms all twirled with noodles and smothered with a creamy, cheese-laced sauce. If that’s not heaven, I don’t know what is. 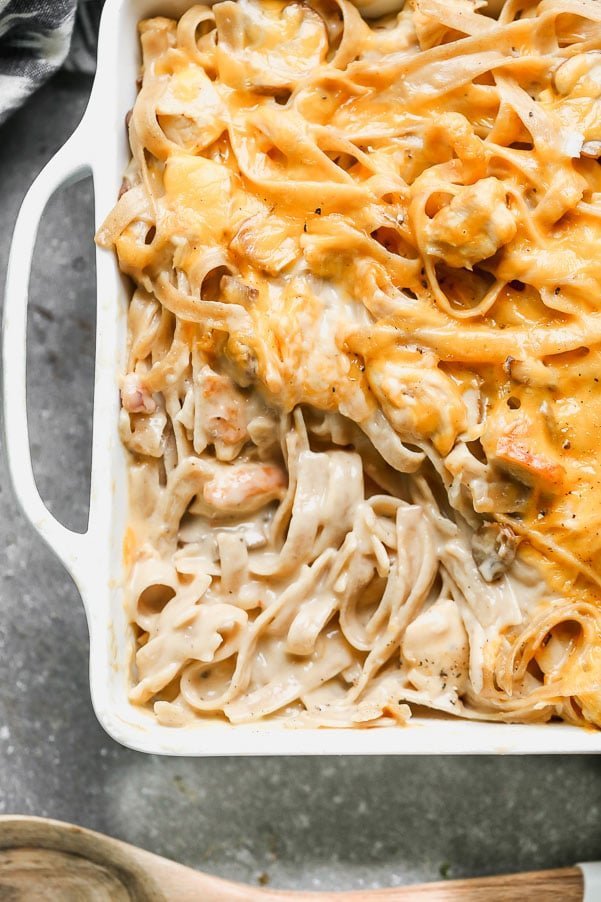 If there were ever a dish that epitomized the notion of comfort food, I think it would be this chicken tetrazzini recipe.

Although I assume the ideal comfort food dish differs for everyone based on their childhood and upbringing. Cheesy chicken tetrazzini is what makes the nostalgic side of my brain tick. It’s something we ate regularly growing up, and it’s also a dish my Mom brought to friends, neighbors, and family members in times of need, and now, so do I. So I guess I also associate it with the warm and fuzzy feeling helping someone out brings.

From when the first freeze comes in October until the first daffodil blooms in spring, you can bet I’m whipping up a version of chicken tetrazzini (or this chicken spaghetti) somewhat regularly.

Because the original version of this chicken tetrazzini recipe isn’t exactly categorized as healthy (or even close to it), I set out on a mission to lighten it up a little bit. And boy, I’m so glad I did. This lightened up version is still cheesy, still creamy, and still just as comforting. 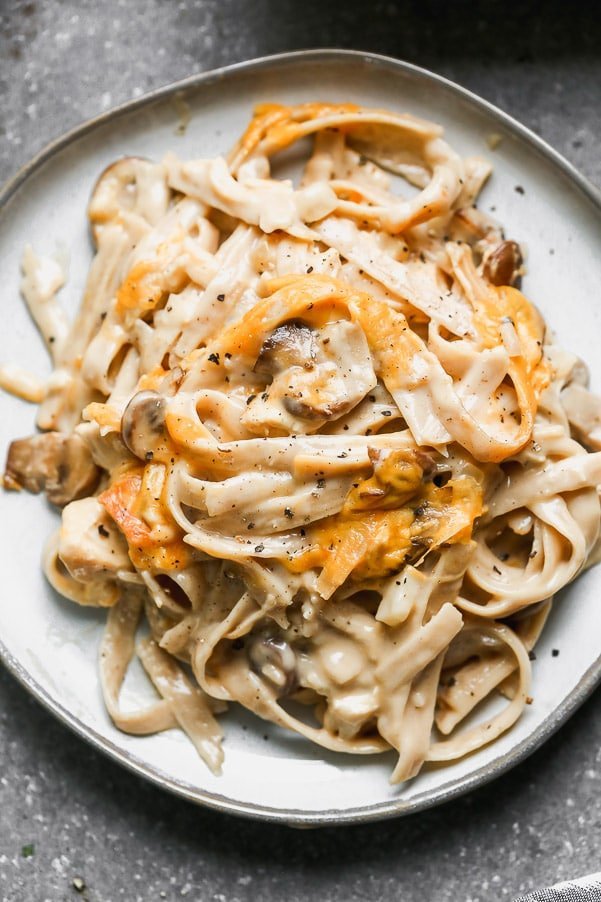 What is Chicken Tetrazzini?

But first, what the heck is chicken tetrazzini? Chicken tetrazzini is a creamy noodle dish packed with mushrooms, cheese, and a creamy sauce. It’s covered with more cheese, baked, and served casserole-style.

The great thing about sherry?? It’s not an ingredient I have to omit to lighten up our original recipe. In fact, I actually double the amount of sherry in this healthy chicken tetrazzini recipe to ensure even a lightened-up version doesn’t lack any flavor. 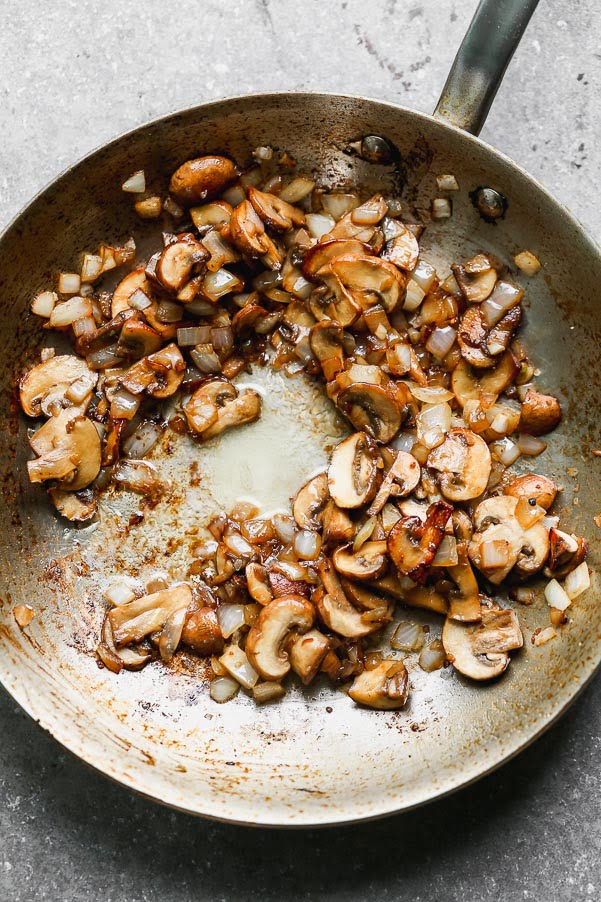 Our version of a healthy chicken tetrazzini recipe also has a from-scratch cream sauce, except instead of our original which includes heavy cream, we use a part low-fat milk, part chicken stock mixture.

The butter we use is cut back and the full-fat cheddar cheese is swapped out with a 2% milk variety. Our last attempt to lighten this classic dish is to swap out traditional white flour pasta  for whole-wheat. 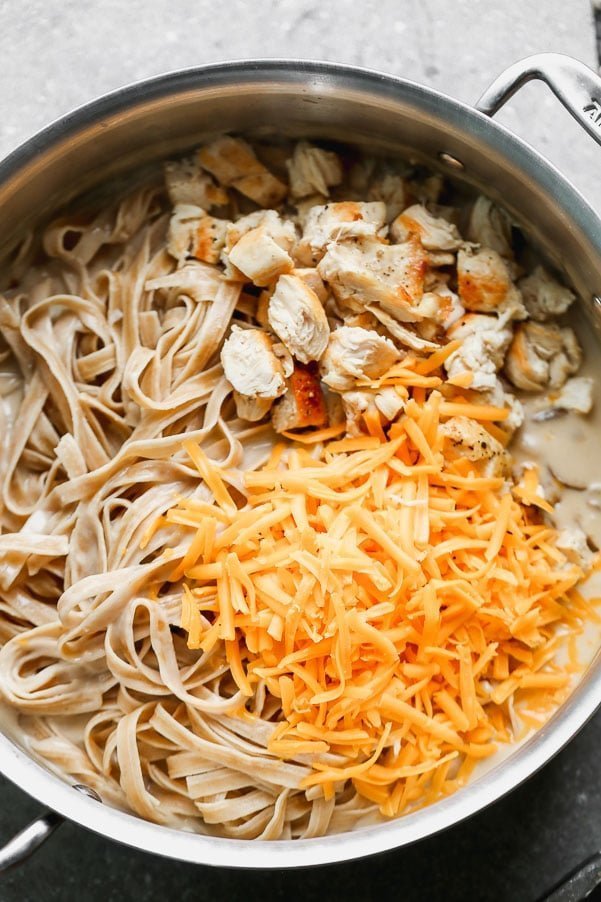 Chicken. I like to cook my own chicken. If you cook the chicken in the same skillet you cook the mushrooms and make the sauce in, it adds yet another layer of flavor. Layers of flavor = delicious chicken tetrazzini. I use chicken tenders, because they’re as the name implies, super tender and cook quickly, but you can also use chicken breasts sliced thin or cut into bite-sized pieces.

Butter. Every thickened cream sauce or béchamel starts with a fat, and here we use butter. Unsalted butter is what you’ll need.

Mushrooms. For maximum flavor, use cremini mushrooms. Cremini mushrooms are baby portabellas so they’re a little bit heartier and more flavorful than a typical button mushroom.

Flour. Flour is used to thicken the cream sauce. 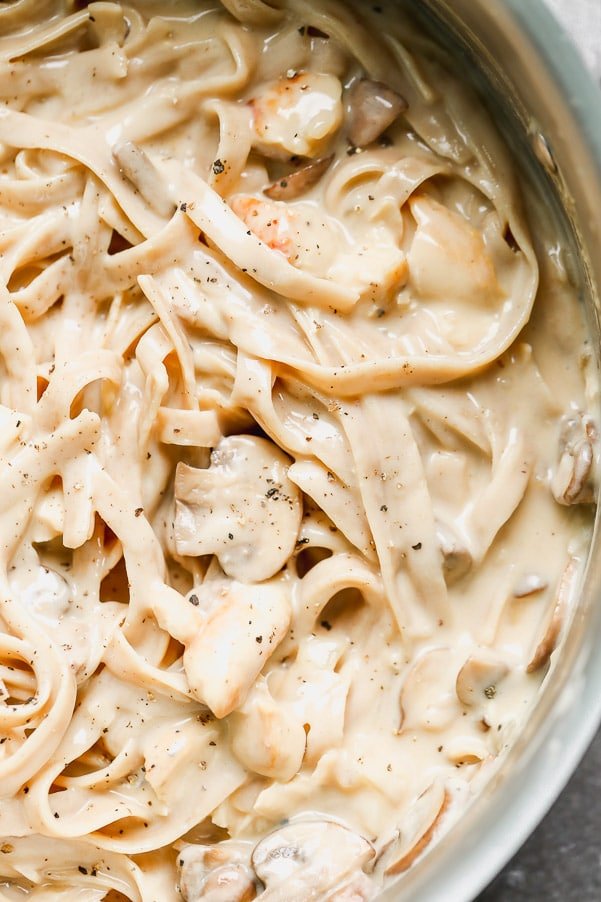 Sherry. As aforementioned, sherry is an essential ingredient in this healthy chicken tetrazzini recipe. It adds a nutty note that makes this version truly delicious. Don’t leave it out! And don’t buy the stuff you get at the grocery store. If you can, go to your nearest liquor store and buy good-quality DRY sherry. You won’t regret it.

Chicken stock. Low-sodium chicken stock or broth is what you want to use here.

Pasta. For me chicken tetrazzini means wide, long-stranded noodles, but we’ve also made with wide egg noodles as well. In this version, we used whole-wheat linguine, but if you can find whole wheat egg noodles, that will work as well. This is our favorite brand of whole-wheat pasta.

Cheese. Sharp cheddar cheese is traditional in chicken tetrazzini, so we use a 2% milk lower fat sharp cheddar. 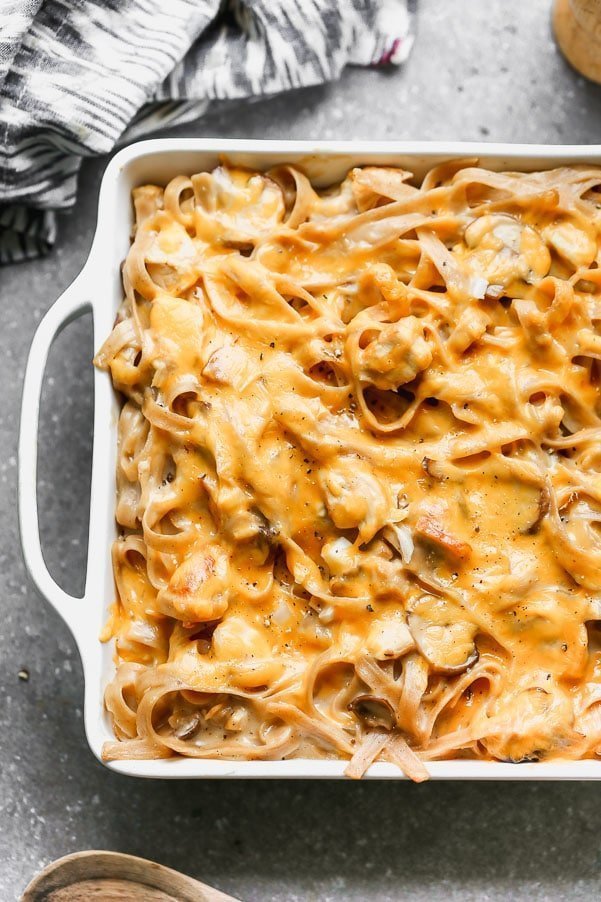 How to make this Healthy Chicken Tetrazzini Recipe

Make the sauce. Whisk in flour.Cook for one minute. Slowly whisk in milk, chicken stock and dry sherry. Bring to a boil and reduce to a simmer. NOTE. Do not add cold milk and chicken stock. I like to heat them both up in the microwave before whisking it into the veggies and roux. It helps to thicken the sauce faster.

Cook the pasta. While the sauce thickens, cook the pasta. You want the pasta to be UNDER aldente since it will continue to cook in the oven.

Assemble. Once the pasta has cooked, drain and transfer to the sauce, along with the reserved chicken and all but 1/2 cup of the cheese. Use tongs to toss everything together. Season with salt and pepper.

Bake. Transfer to a square 9×9 baking dish. Cover with cheese. Bake until hot, bubbly and cheese has melted, about 15-20 minutes. 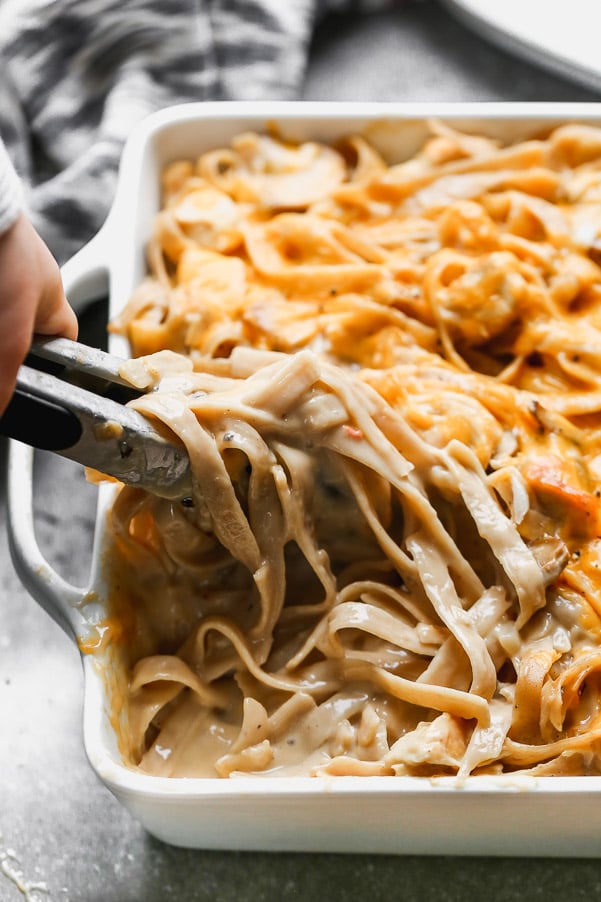 Yes! If you’re prepping this healthy chicken tetrazzini recipe in advance, you REALLY want to make sure to undercook the noodles. They should have a really good bite to them. Prepare up until transferring everything to the baking dish. Cool completely in the pot, and then transfer to the baking dish.

Cover with cheese and then cover with plastic wrap or foil and refrigerate until you’re ready to bake. Bake as instructed. This can be done up to two days ahead of time.

Is this good leftover?

SO good. We made this last week and picked on it all week long. When you’re ready to re-heat, add a portion to a plate or bowl. Cover with a damp paper towel or cloth towel and microwave in 35-second increments until hot. 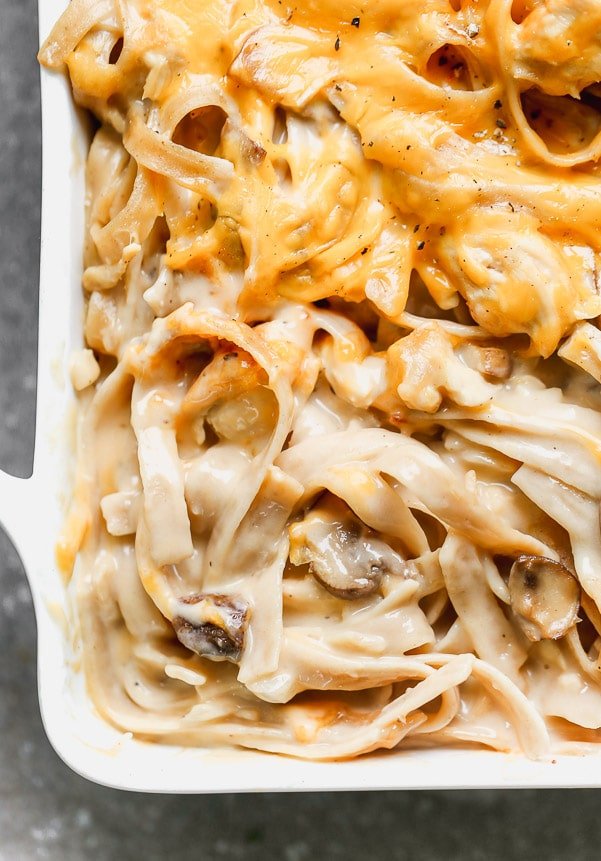 What to serve with Chicken Tetrazzini 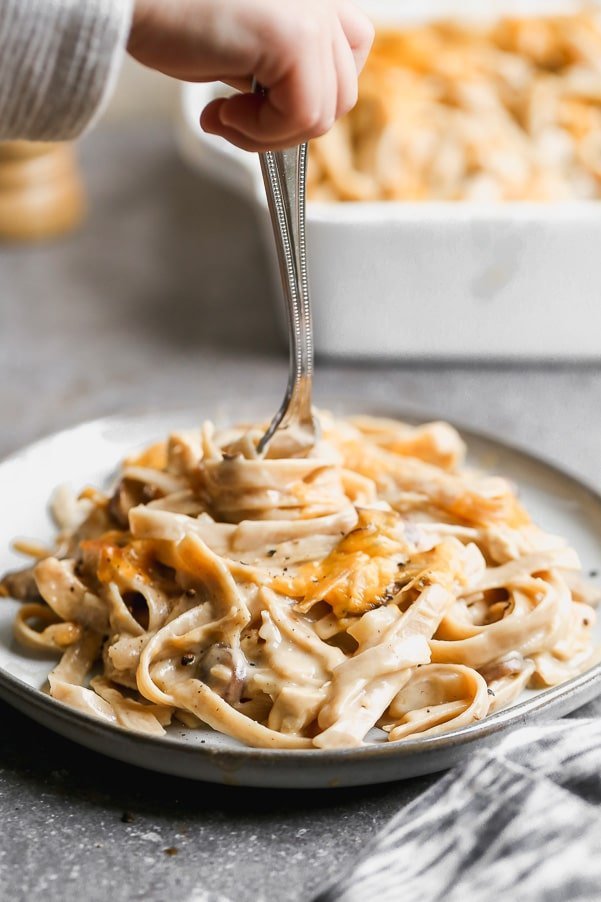 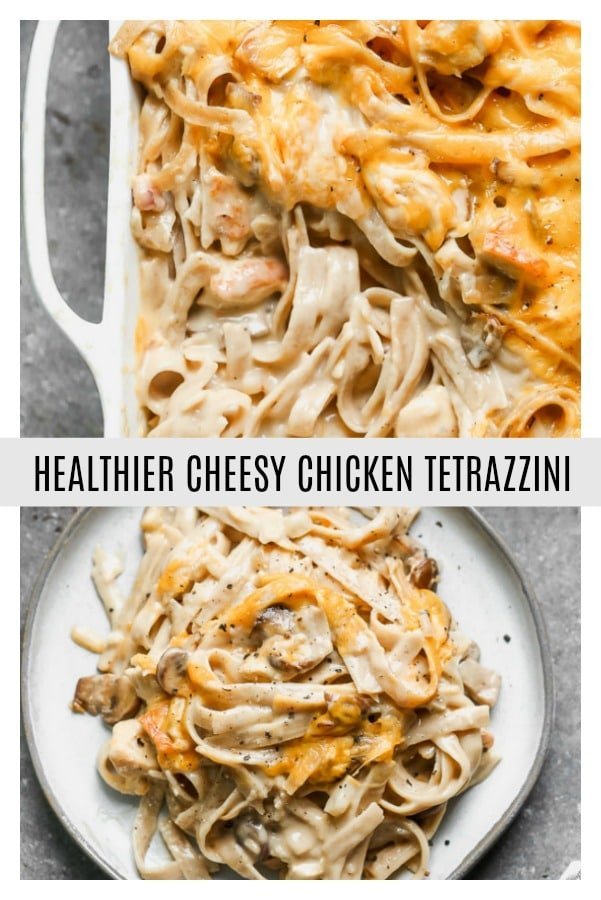