Chicken with Roasted Fennel and Apple Brandy Cream Sauce is an easy weeknight dinner that’s a total showstopper! Perfect for those days when you’re in a complete dinner rut.

If you’ve ever said chicken is boring, then I assure you, you haven’t met today’s Chicken with Roasted Fennel and Apple Brandy Cream Sauce. That is, unless you think perfectly seared, juicy chicken breasts blanketed in an apple brandy and fennel seed-infused cream sauce, and tossed with caramelized apples and roasted fennel that’s almost as sweet as candy, is boring.

I didn’t think so.

Have you ever roasted fennel before?? It’s absolutely delicious. I never used to be a fan of fennel…until I roasted it. The strong anise taste fennel innately has when it’s raw, breaks down into a much more subtle, sweet flavor during the roasting process. I’d sort of equate to the way a caramelized onion tastes, in that it takes on an almost candy-like essence in the end that I find it to be completely addictive.

I have no problem eating it as is, straight from the roasting pan, but since fennel seems to have a magic friendship with apples, I found it to be the perfect duo to round out this chicken dish. 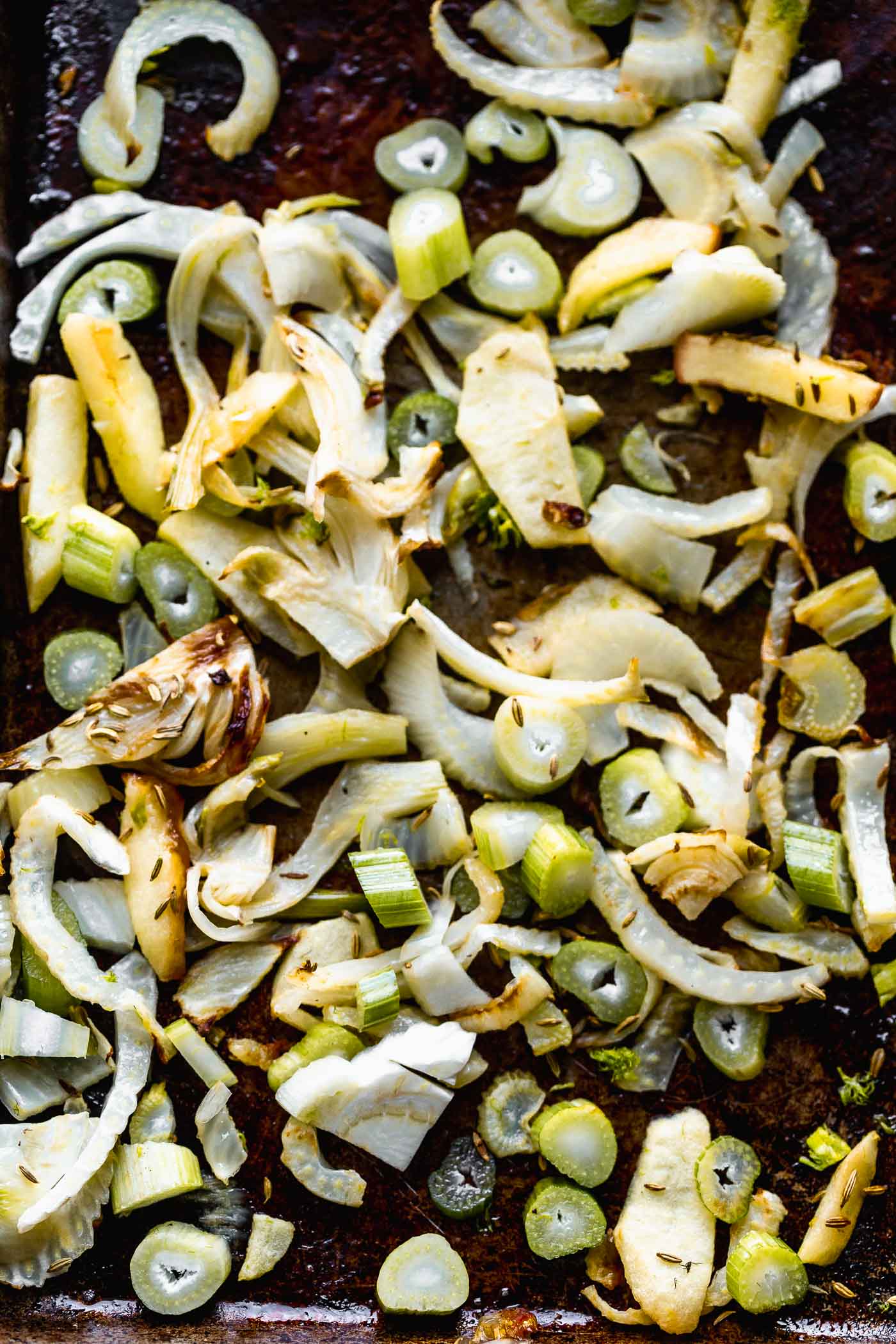 Roasted the fennel and apples is as easy as slicing the fennel and apples, tossing them with a little bit of olive oil, plenty of fennel seeds (to compliment the fresh fennel), a touch of black pepper, and of course, plenty of salt. The veggies are popped into a 375 degree oven, and cooked until they’re juuust starting to caramelize and soften.

In the meantime, season the chicken breasts with lots of salt and pepper and sear them in a super hot, well-seasoned cast-iron skillet. Because chicken takes longer than the 2-3 minutes per side it takes to cook them all the way through, I like to pull the veggies out just shy of completion, and sprinkle them amongst the partially cooked chicken breasts. The whole thing goes back into the oven until the chicken is cooked through, and the veggies are perfectly soft and sweet. It’s about five more minutes, give or take a minute or two. 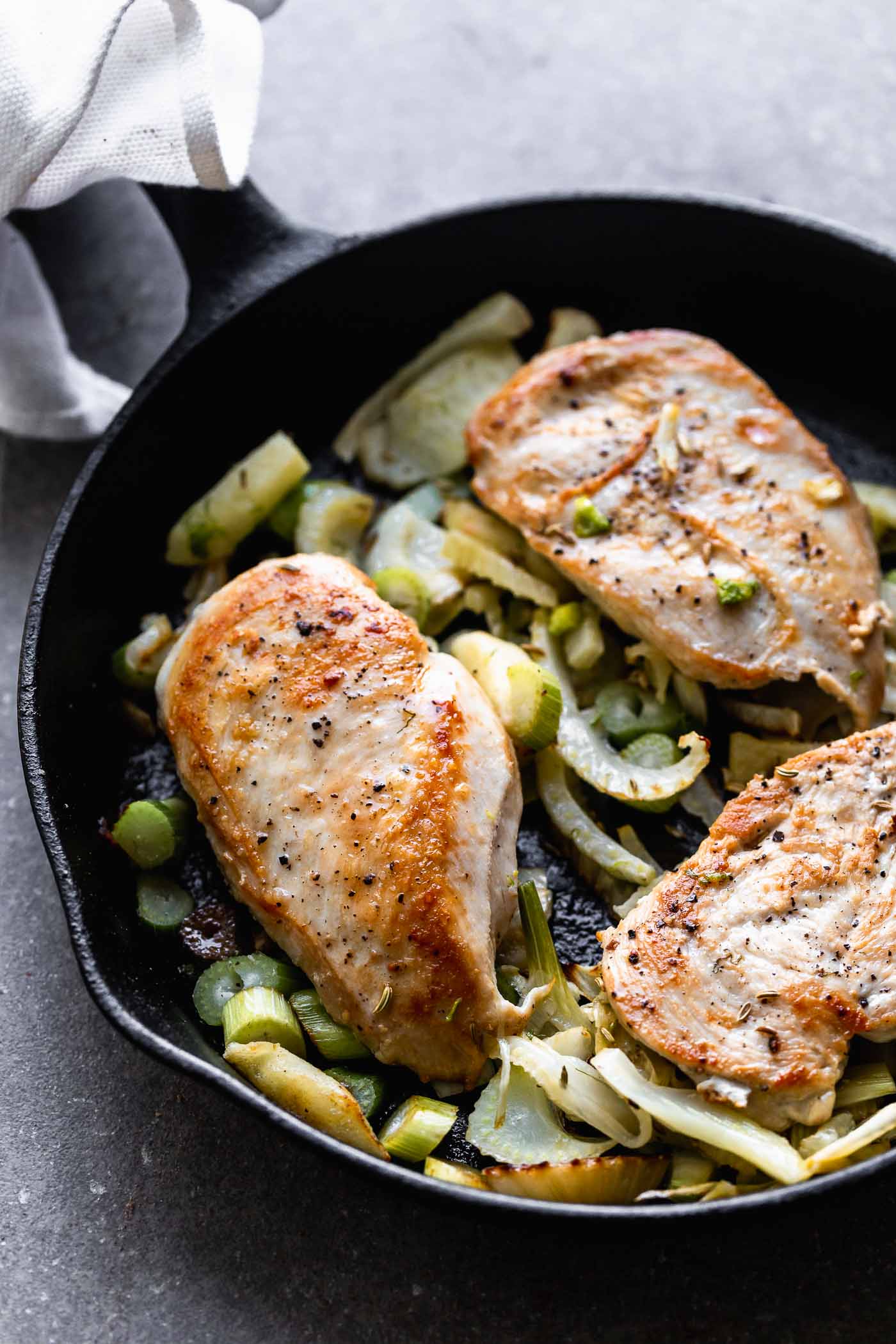 There’s the sauce. The sweet, savory, creamy sauce, so good, you’ll be licking the plate clean after the chicken and vegetables have disappeared.

There are very few ingredients in the sauce — calvados (apple brandy), cream, fennel seeds, salt and pepper — which may lead you to think it’s one-note, but it’s not, trust me.

If you’ve never cooked with calvados, you’re in for a treat. With only one ingredient, you something simple, like a cream sauce, to a sweet, unique new level that feels really special. Plus, you can use the leftovers to make this Apple Brandy and Whiskey cocktail I’m currently obsessed with.

Once the chicken is done cooking, you pull the pan out of the oven, transfer the chicken and veggies to a plate to rest, and make the sauce directly in the hot pan. Use the calvados to deglaze the skillet, and pick up all of those awesome brown bits that stuck to the bottom of the pan in the cooking process. Once the calvados is reduced, add in the cream, salt and pepper. Simmer the sauce until thick and luscious, then put the vegetables and chicken back in for another minute or so.

I also like to chop up the wispy fronds of the fennel as garnish, it’s just another way to add another element of the fennel into the dish, plus it’s pretty.

Serve over a bed of creamy orzo, simple quinoa, or a big bed of sautéed spinach. 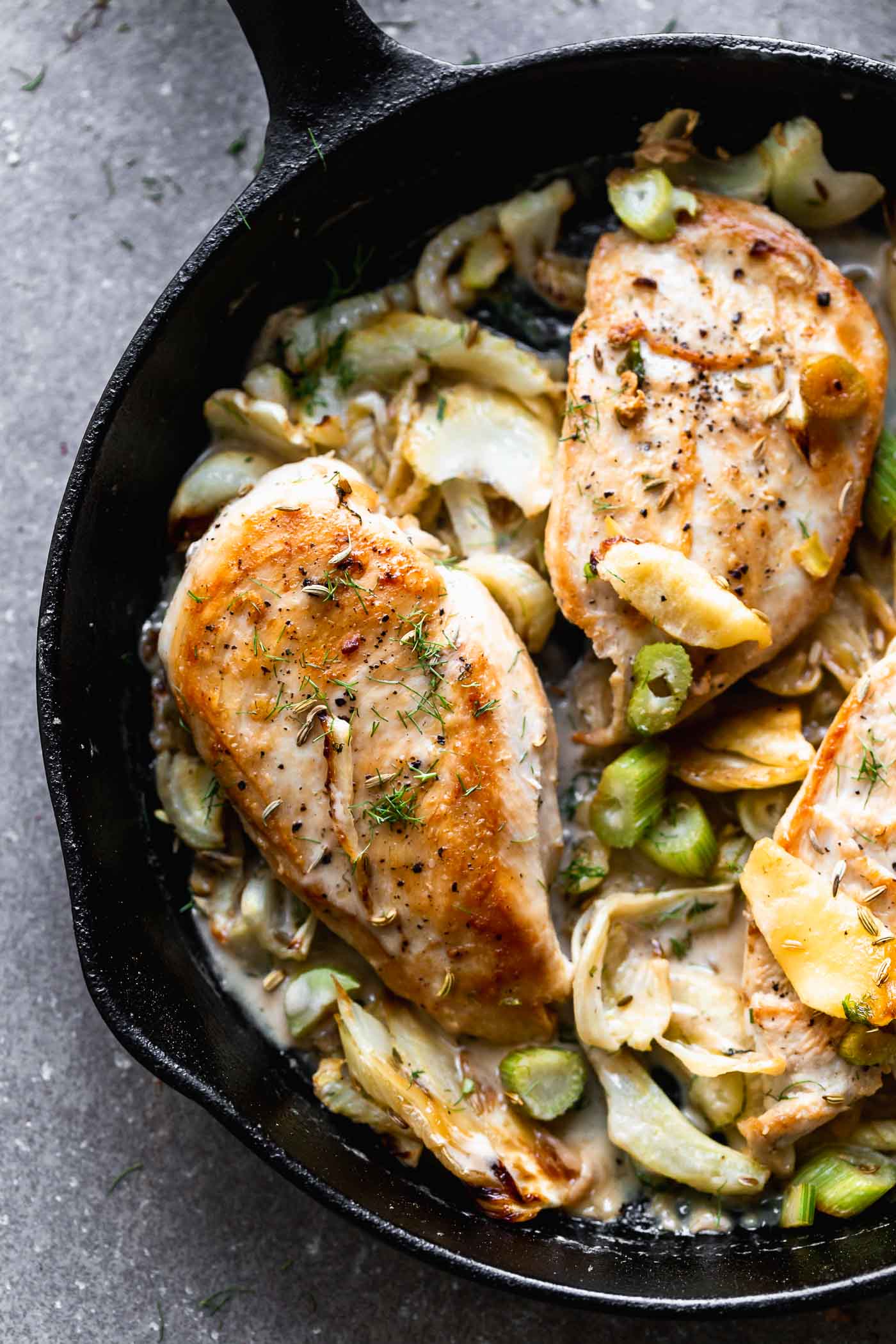 For more easy chicken dinners, check out these posts! 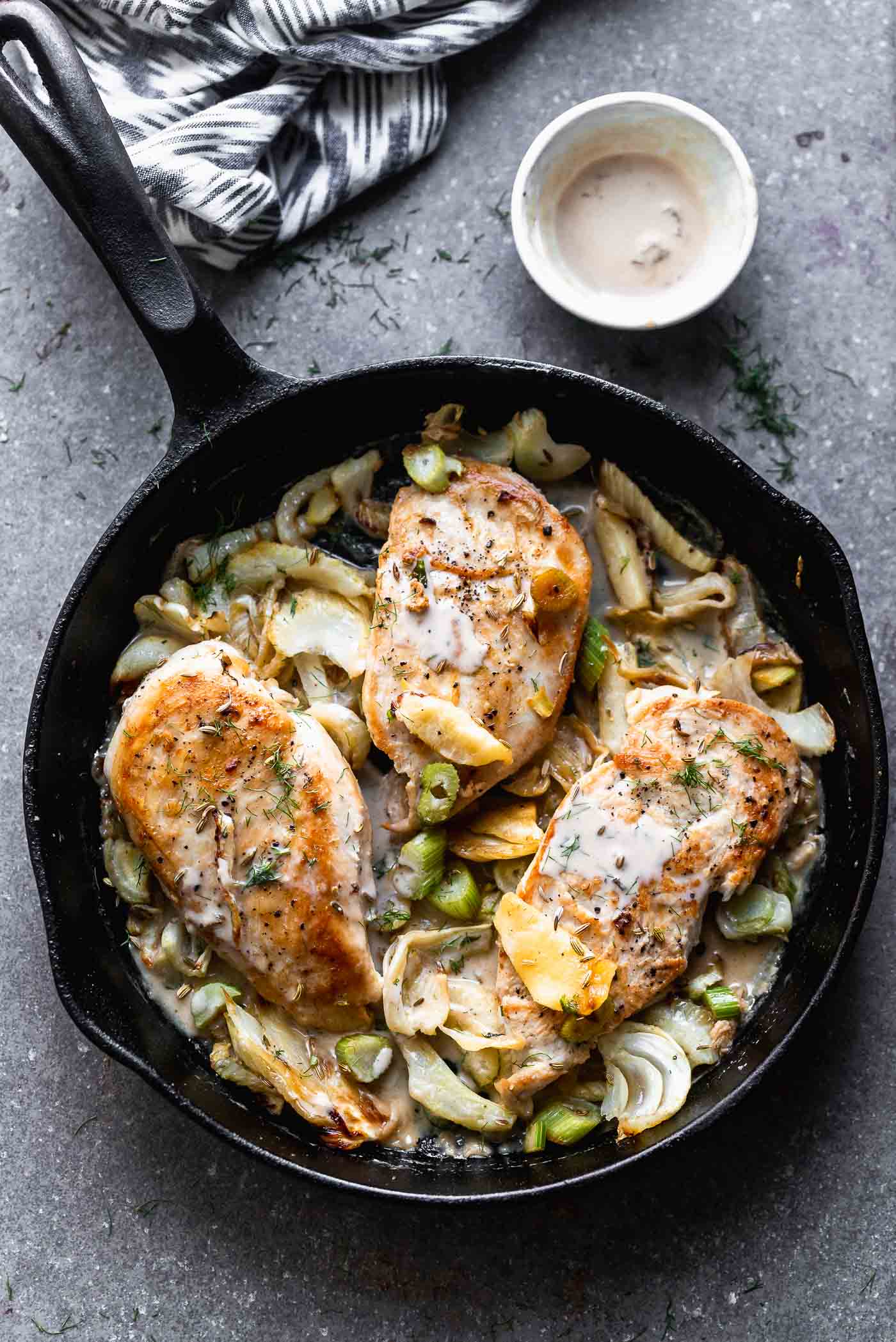 Print Rate Email
Chicken with Roasted Fennel and Apple Brandy Cream Sauce is an easy weeknight dinner that's a total showstopper! Perfect for those days when you're in a complete dinner rut!
Prevent your screen from going dark
4