My favorite fall feature isn’t the crisp cool mornings, the way the leaves turn from bright green to bright orange or the fact that my favorite scented fall candle becomes a constant presence in our house – although those things are lovely.

Nope, it’s the fact that I now have a valid reason to eat hot soup, like this Creamy Roasted Red Pepper & Manchego Potato Soup whenever I want without simultaneously melting from the heat. 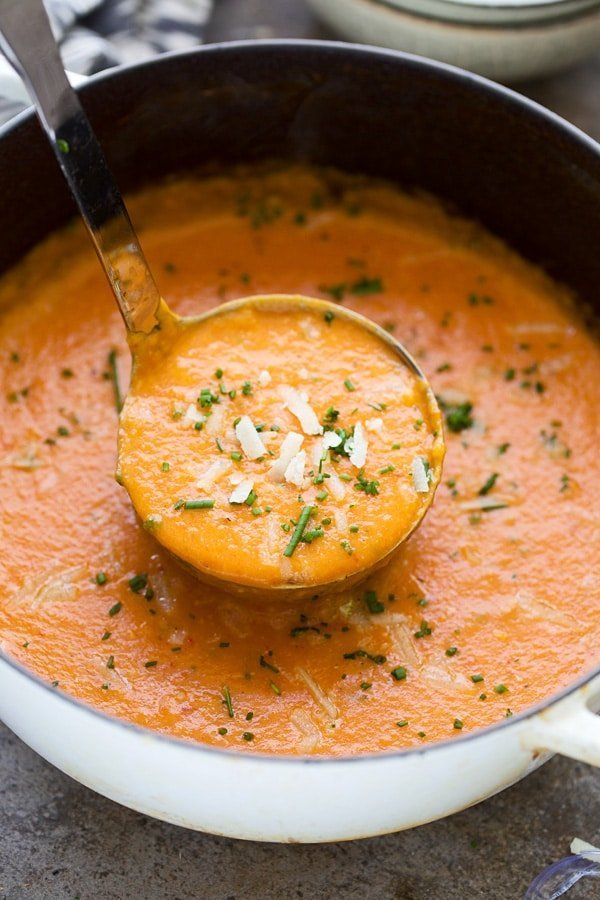 While soups are my jam year-round, it’s sort of hard to get my husband on board with the whole drinking hot liquids thing when it’s 90 degrees outside. But the second that temperature dips below 80, bring on the chicken noodle, broccoli cheddar and butternut squash soups with vengeance – because I’m ready, and he better be too.

This particular recipe is the perfect introductory soup for fall, because while it feels like fall, it’s still relatively light and almost refreshing which makes it perfect for those in-between days when Mother Nature can’t decide which season it should be. 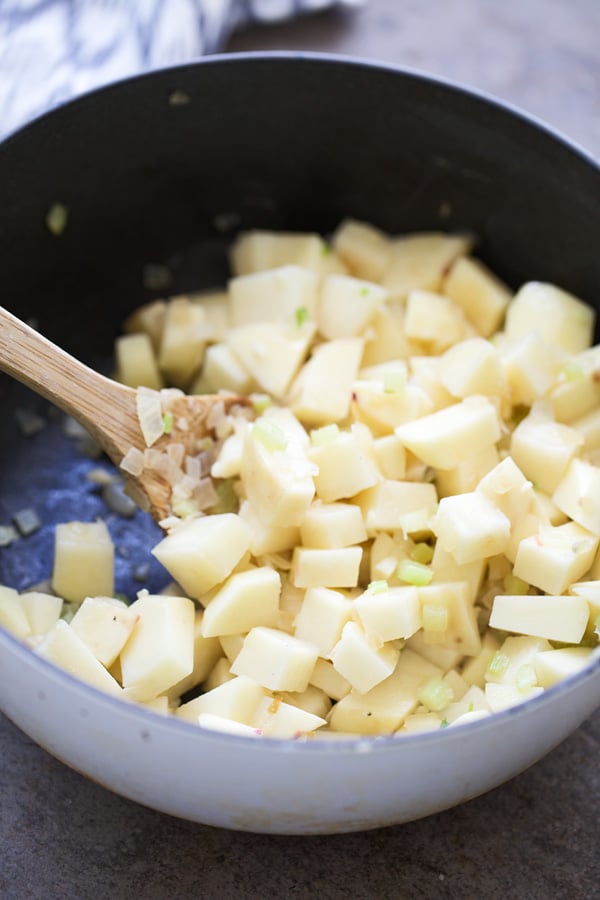 Potato soup happens to be one of my favorites, but for some reason, it’s not something I make at home very often. I think I just always associate it with something that’s heavier and more indulgent which I try to save for going out or special occasions. At home, I usually like to keep things relatively healthy, so I thought the perfect compromise would be a little bit lighter take on the classic – with a Spanish twist.

The Spanish twist comes in the form of roasted peppers, smoked paprika, loads of roasted garlic and salty manchego cheese – all ingredients you should be able to find in your grocery store pretty easily. I actually really wanted to use roasted piquillo peppers which are classic to Spanish cooking and have a little bit more of a bite to them than traditional roasted peppers, but they weren’t available in my local grocery store, so I’m assuming yours wouldn’t have them either. As most soup bases do, this one starts with plenty of onion, celery, raw garlic, salt and olive oil. Once the veggies soften a bit, the diced potatoes go in and cook for five minutes or so, just until they start to soften. Next, the chopped roasted peppers (I used a combination of red and yellow) go in, along with plenty of smoked paprika, an obscene amount of roasted garlic, and another layer of salt.

Because roasting garlic is so easy, I just do it myself before I even start chopping the veggies, but it takes at least 30 minutes, which is about as long as the entire soup takes to make from start to finish, so I actually like to make it ahead of time, or even better, buy it already roasted from the olive bar at the grocery store. Either way, make sure you prep ahead so you’re not waiting on it to roast, you don’t want to leave it out! It adds a layer of flavor you can’t replicate with raw or dehydrated garlic.

Next, everything gets covered in plenty of chicken stock and simmers until the potatoes are cooked, about 10 minutes or so. 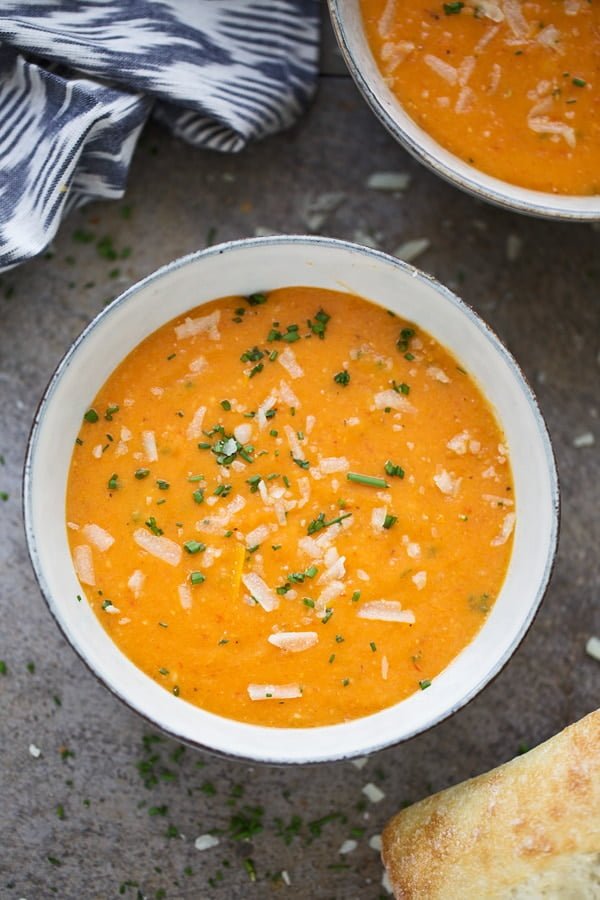 Right about here is where personal preference comes in to play. So I like my soups more on the puréed side, but Kevin prefers his chucky, so we meet halfway, and I use an immersion blender to purée half the soup and then leave the other half with some texture.

Once you get it to your perfect consistency, the manchego cheese goes in, is stirred gently until it’s completely melted, a hit of cream is drizzled in and the soup is seasoned to taste with plenty of salt and pepper.

I like to garnish with a little bit of chopped chive and some extra grated cheese, and then serve each bowl of soup with a crusty piece of bread for dipping. 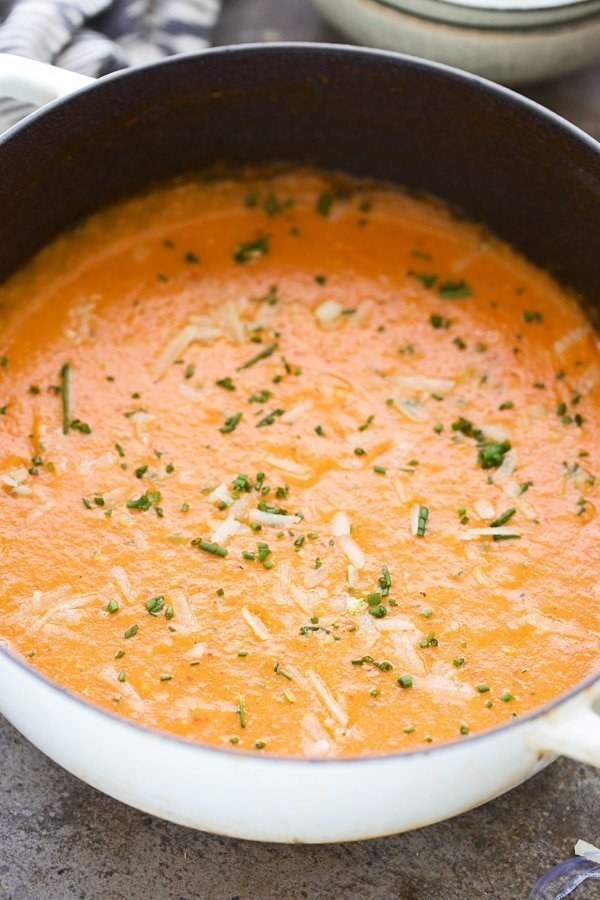