What happens when lobster tails go on sale for five dollars a pop? You buy them. All of them. And then you make this Lobster Scampi with Linguine. This easy pasta is packed sweet, succulent lobster, a garlicky butter sauce, and silky noodles of Linguine. Plus we’re talking about Spiny lobster vs Maine lobster and how to cook lobster tails on the stove. If you thought cooking lobster tails was difficult, think again! This Easy Lobster Scampi recipe is SO easy, and so delicious. I promise you won’t break a sweat making it, and you’ll be LICKING your plate clean when you’re finished.

This is exactly the same as shrimp scampi, but better, because it’s LOBSTER. Sweet, succulent lobster.

I didn’t despise it or anything, it was just always consistently alright, and wasn’t something I got excited about.. I had ordered it at various restaurants and prepared it at home on a handful of occasions, but each time it was exceedingly underwhelming. It was either rubbery and over-cooked or worse, gummy and a weird off-putting color.

I had all but categorized myself as purely a shrimp and crab crustacean lover until I took a local cabbie’s advice when Kev and I were in Santorini around this time last year and ordered the most life-changing lobster spaghetti at a little seaside restaurant in Ammoudi Bay.

At first I thought my newfound lobster love was due to the fact that I was in one of the best spots in the world for spiny lobster or maybe because I’d never had a spiny lobster before, only a Maine lobster, but was holding on to the hope it was just due to poor preparation. It was. Today we’re going to talk about how I figured out the best way to prepare lobster so it’s perfect EVERY SINGLE TIME. And obviously, this Easy Lobster Scampi is a part of that.

Most people are familiar with Maine lobster, because it’s what’ primarily found in the US, and is of course, caught on the east coast, near Maine. The meat comes in three parts – the tail, body and claws. Their meat is sweet, firm, and when cooked perfectly, irresistibly delicious. Since it’s more readily available in the US, it’s typically a little bit more affordable (although still a special occasion crustacean) than spiny lobster.

Spiny lobster, on the other hand only has tail meat because it has no claws. It’s also commonly called rock lobster here in the US, and sourced from warm waters, which is said to give the meat a little less sweetness than the Main lobster – I disagree. I find that spiny lobster is a little bit sweeter and softer than Maine lobster, and if I HAD to choose, would be my personal favorite.

However, both are equally delicious and would work wonderfully in this recipe. How to prepare lobster tails

I have a method when it comes to cooking lobster tail, instead of cooking it whole which I believe leads uneven cooking, I take kitchen shears and cut lengthwise down the center so the tail is in two separate, even pieces with all of the flesh exposed. This is how I prep my lobster tails almost every single time, and it could not be easier since there’s basically nothing you need to do.

How to cook lobster on the stove 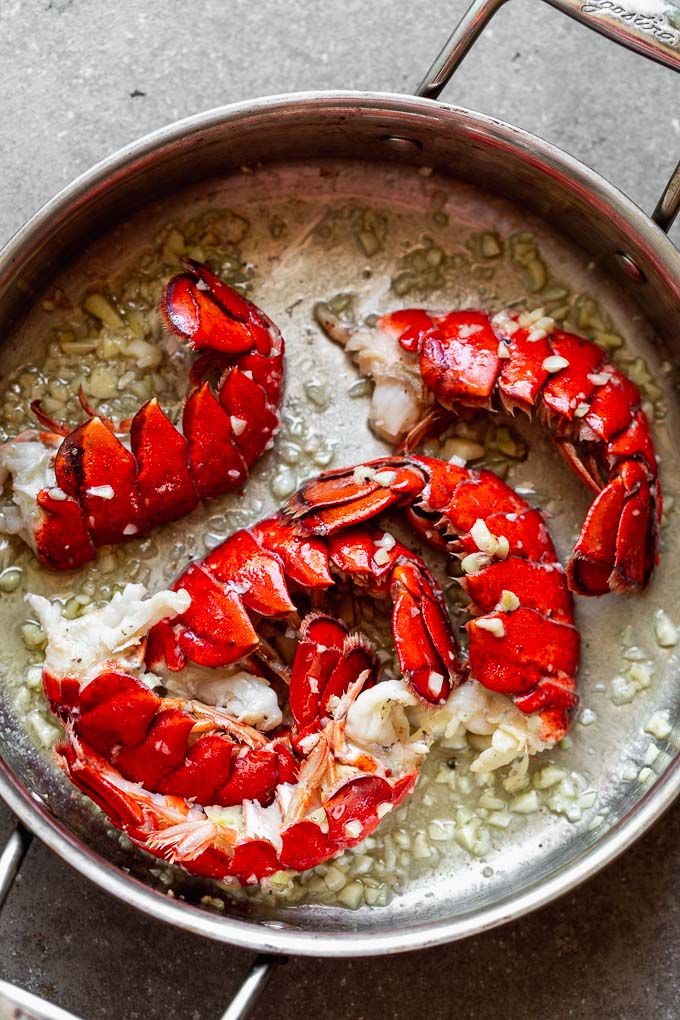 How to make Lobster Scampi

Can Easy Lobster Scampi be made ahead of time?

No no no. This unfortunately does not reheat well. You really want to serve it fresh. If you HAVE to, you can make everything a few hours ahead of time. Cook the noodles under aldente and just leave the lobster out. Save even more pasta water, and when you want to serve, gently heat everything up and add more pasta water as needed. Add in the lobster just before serving. 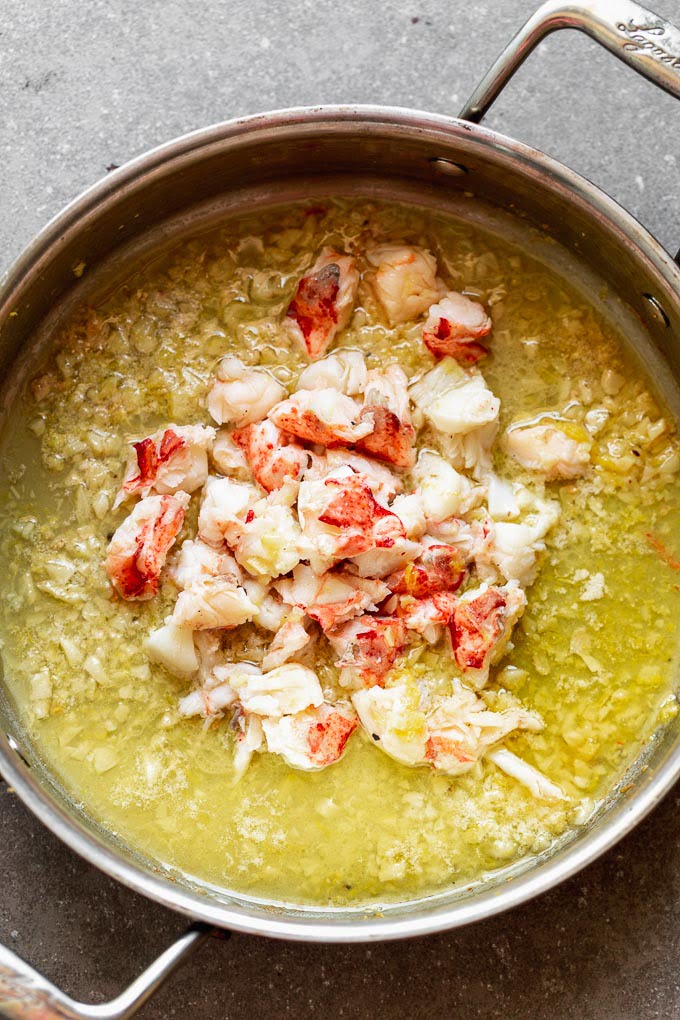 Can you use a different kind of pasta?

Of course, but I really prefer a long noodle. I prefer linguine, but spaghetti or fettuccine will also work.

Can I use shrimp instead of lobster?

Sure! But keep in mind shrimp cook waaaay faster than lobster. 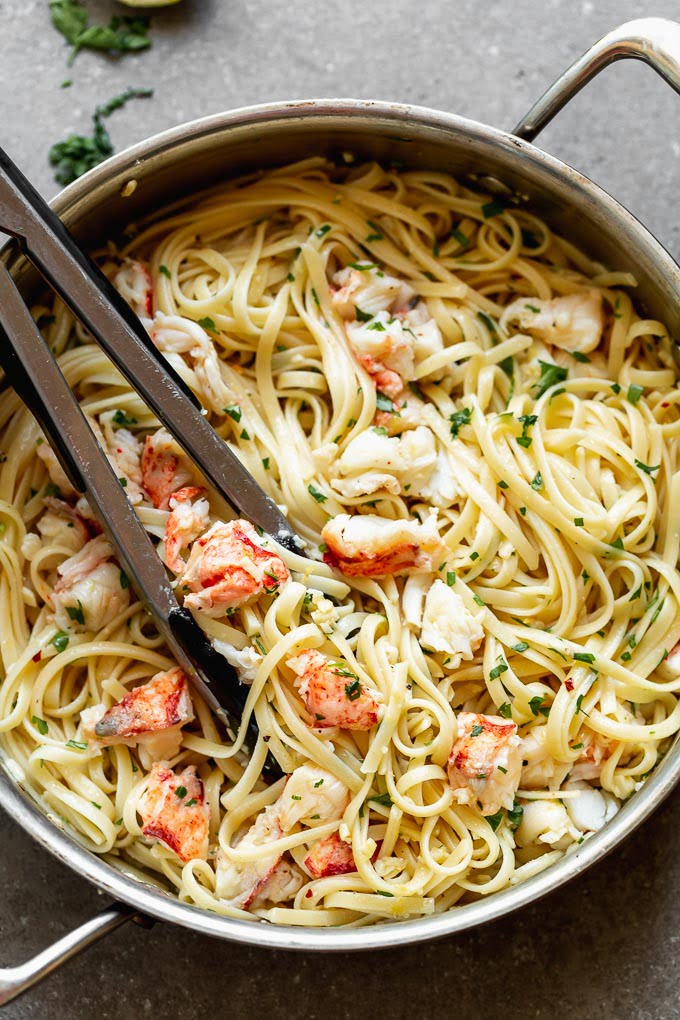 If you LOVE lobster, you’ll also love these Green Goddess Lobster Sandwiches that are packed with sweet lobster lobster chunks bathed in an easy Green Goddess dressing. They’re served with crispy bacon on hearty whole-grain bread, and I couldn’t love them more. We are also absolutely OBSESSED with these Tarragon and Lemon Lobster Rolls. These are probably the best lobster rolls you’ll ever have – they’re packed with lobster that’s tossed in a super light mayo and lemon-based sauce. They’re nestled into garlic bread buns and guys, they are SO good. 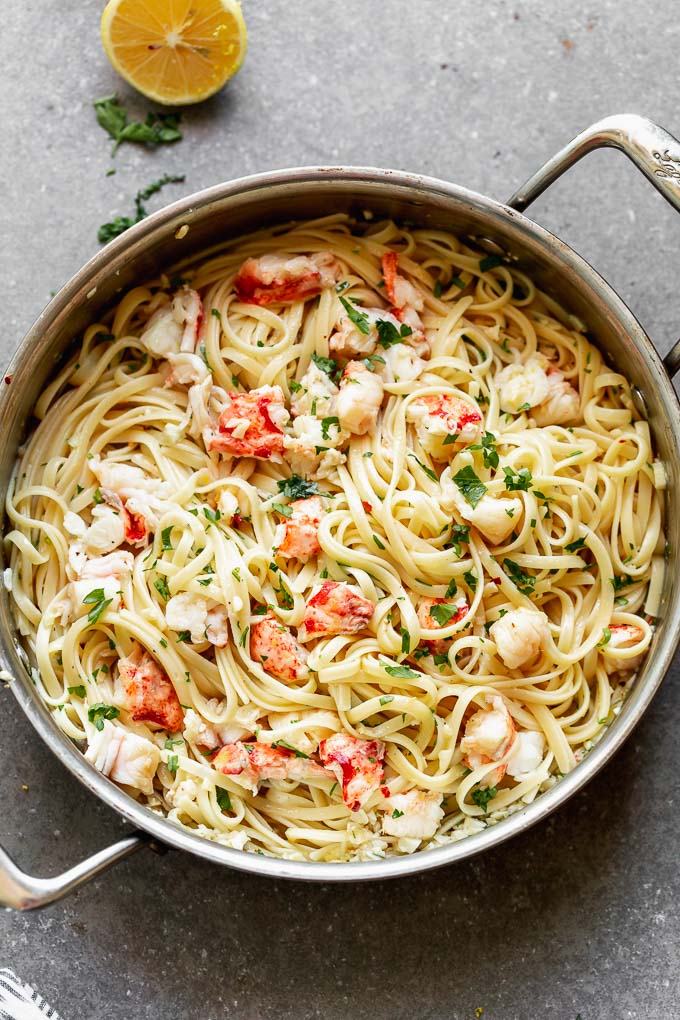 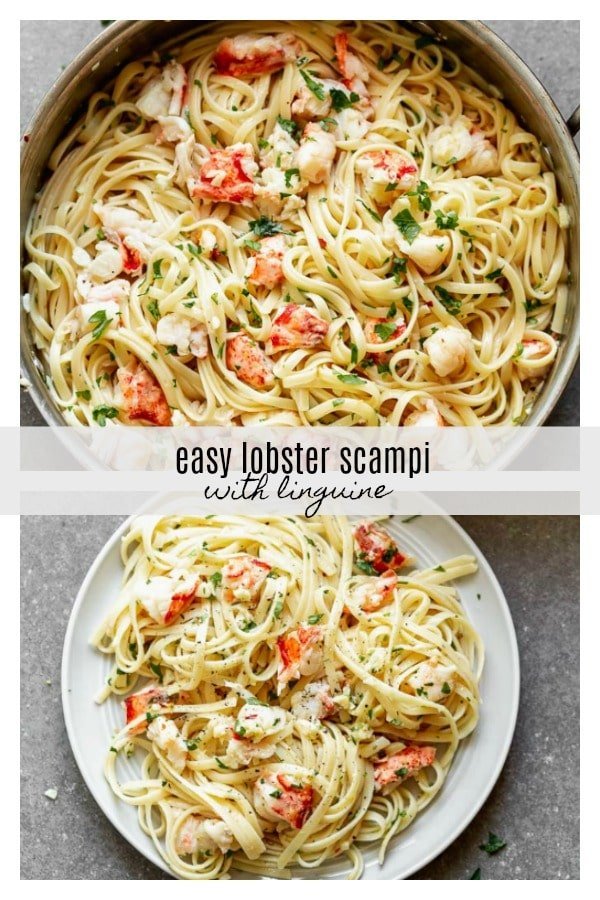