This 5-Ingredient Butternut Squash Alfredo is creamy, cheesy, and SO delicious. Packed with roasted butternut squash, lots of parmesan cheese, and just a touch of cream, this is an easy dinner you’ll come back to time and time again this fall! 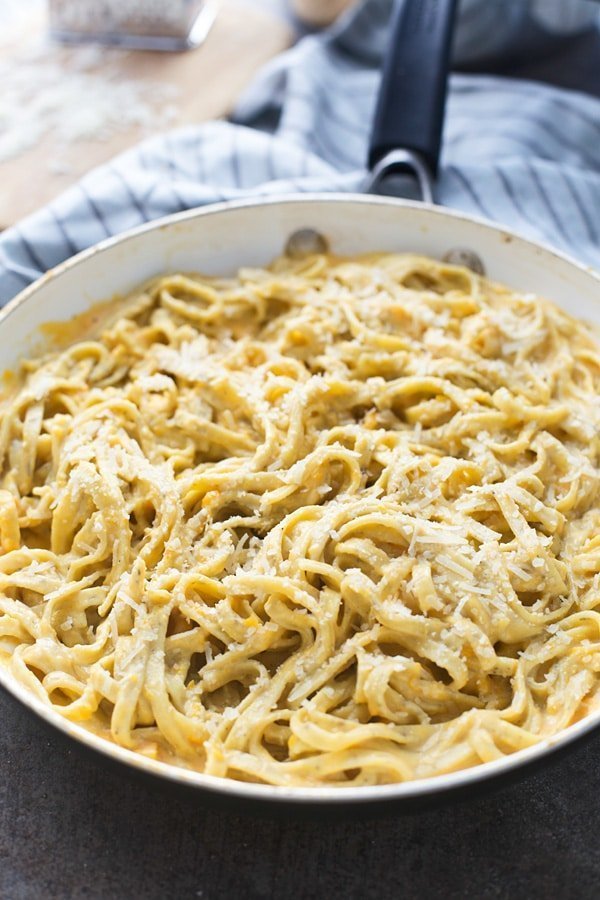 Yesterday was one of those really great days. The baby slept in. Kevin stayed home. We walked, played, had coffee, and ate a home-cooked frittata before 9am. We went to lunch. We shopped for furniture for our basement renovation that may never be complete. We swung at the park (Well, the baby swung, we pushed.). We kissed Teddy Boo Boo entirely too many times.

It was like the best low-key, yet productive Sunday, but on a Monday, which makes it even better, because we’re that much closer to Friday.

I had absolutely no intention of cranking out a blog post for today, for fear I’d turn my relaxing, perfect family day into a stressful workday. Yet, when the baby went to sleep for his afternoon nap, and Kevin quickly checked his email, I found myself in an almost silent house, with nothing to do. Because my first instinct is never to clean the house or do laundry as it should be, I instead, decided to throw this quick 5-Ingredient Butternut Squash Alfredo together. Which is basically an easier version of this Creamy Butternut Rigatoni.

Aldente linguine noodles intertwined in a creamy butternut-squash cream sauce and studded with plenty of parmesan cheese, THIS is what pasta dreams are made of. Simple and delicious.

With only five ingredients, this super easy rift on a classic, is something anyone can throw together, even on the busiest of nights. While we all know how terrible a classic alfredo sauce is for you, I’ve slightly lightened up this version by using pureed butternut squash as the base of the sauce, and half and half instead of heavy cream. 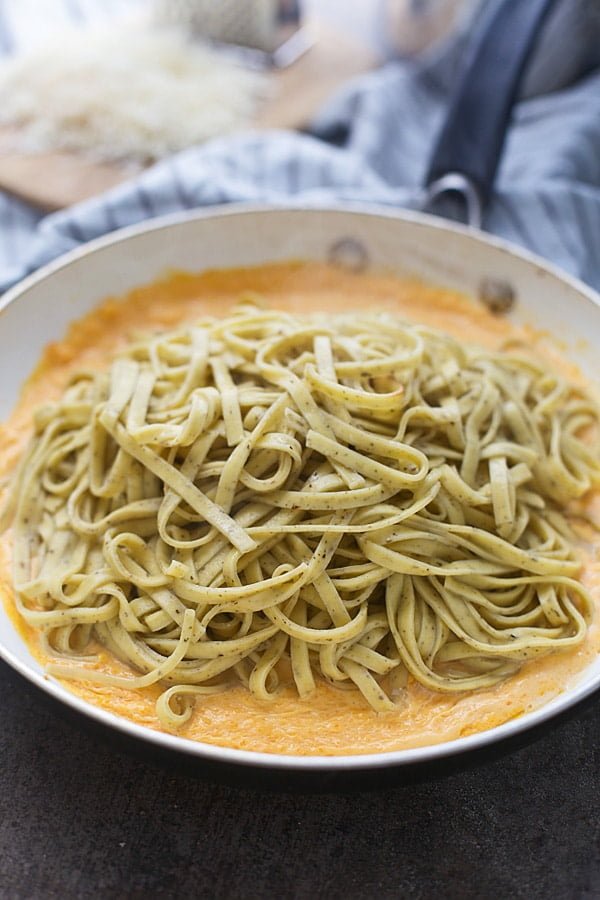 Butternut Squash. Of course you can’t have butternut squash Alfredo without the butternut squash. To save on time, I like to buy my butternut squash cut and peeled already, but of course, you can do this yourself. If you do buy the pre-cut squash, just make sure the cubes are relatively similar in size.

Olive oil, salt and pepper. To roast the squash, I just a little bit of olive, plenty of salt, and pepper.

Half and half. Instead of using heavy whipping cream as you would in a typical Alfredo sauce, here, we lightened things up just a touch by using half and half. If you really wanted to cut calories and fat more, you could also whip up a quick béchamel sauce with milk.

Parmesan cheese. When using minimal ingredients, you want to make sure you use good-quality ingredients. Here, I like to use parmigiano reggiano, which is basically the best parmesan cheese you can buy. It’s nutty, sharp, and SO delicious. If you don’t want to shell out the big bucks for it, you can also use a good-quality ages parmesan as well.

Linguine. I love to use linguine here, but fettuccine and pappardelle would be a close second. 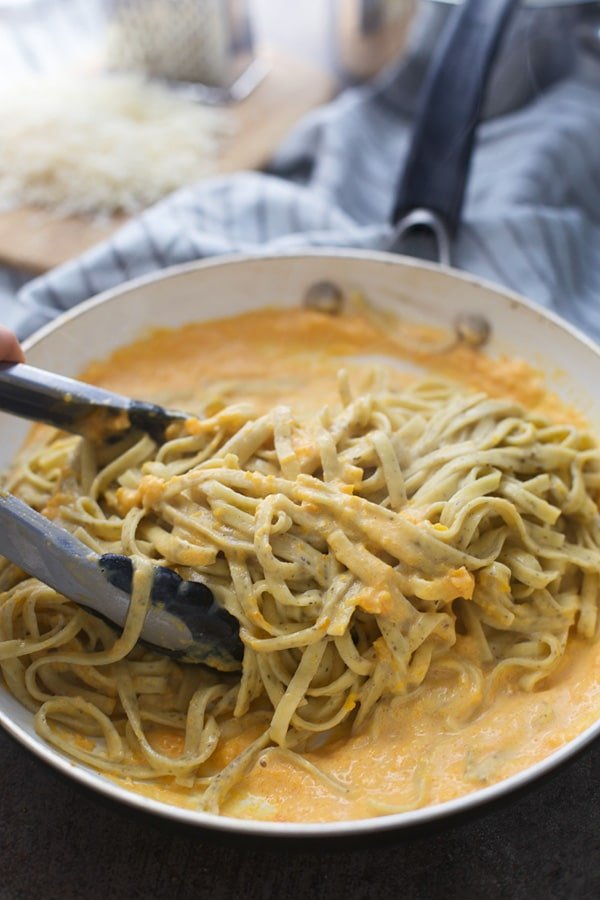 How to make butternut squash Alfredo

Roast the squash. Again, because we’re using only five ingredients, you really want to squeeze out as much flavor as you can from each ingredient. To do this, I like to roast the butternut squash. Roasting helps to caramelize the squash, creating an extra layer of flavor you wouldn’t get from simply sautéing it or steaming it.

Toss the cubed squash with a little bit of olive oil and plenty of salt and pepper. Spread on a baking sheet and roast in the oven until super soft and caramelized.

Add the rest of the half and half and a little bit of salt. Bring to a boil and reduce to a simmer.

Finish the sauce. Add the cooked pasta along with a little bit of the starchy cooking liquid to the squash and half and half mixture. Continue to toss on a low heat until until the noodles have coated the sauce. Add cheese and toss again. If needed, add more starchy pasta water. Season to taste with salt and pepper.

How do I make this even lighter?

If you want to make butternut squash Alfredo even lighter, try this. Whisk 2 tbsp flour with 1/4 cup low-fat milk. Once that’s smooth, whisk in another 1/2 cup low-fat milk with the flour/milk mixture. Replace milk with half and half and proceed with the recipe as directed. 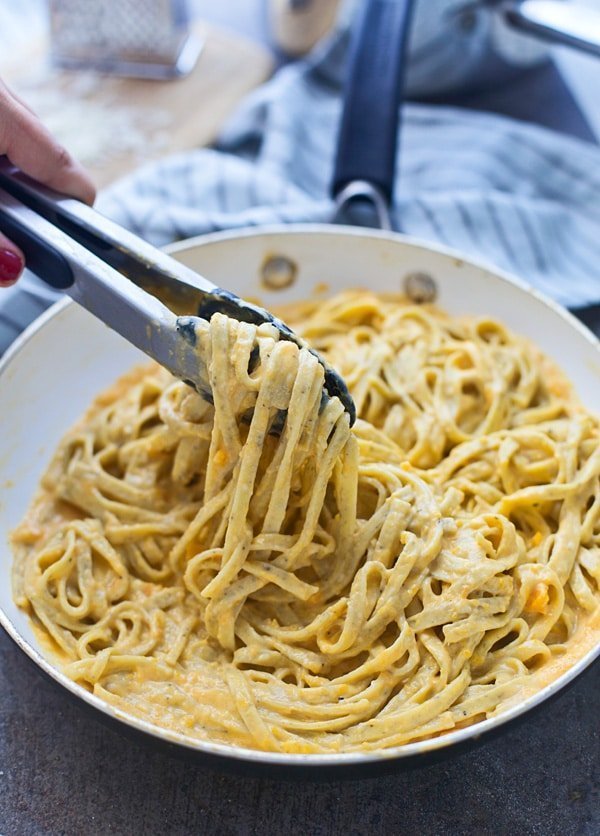 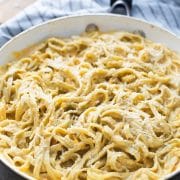 This 5-Ingredient Butternut Squash Alfredo is creamy, cheesy, and SO delicious. Packed with roasted butternut squash, lots of parmesan cheese, and just a touch of cream, this is an easy dinner you'll come back to time and time again this fall!