This Grilled Artichoke Recipe with Garlic Bread Crumbs is such an easy, fresh way to prepare artichokes. Halve the artichokes, brush them with olive oil, salt and pepper, and grill until soft. We sprinkle them with a crispy garlicky breadcrumb, and then drizzle them with an easy vinaigrette. Easy and delicious! 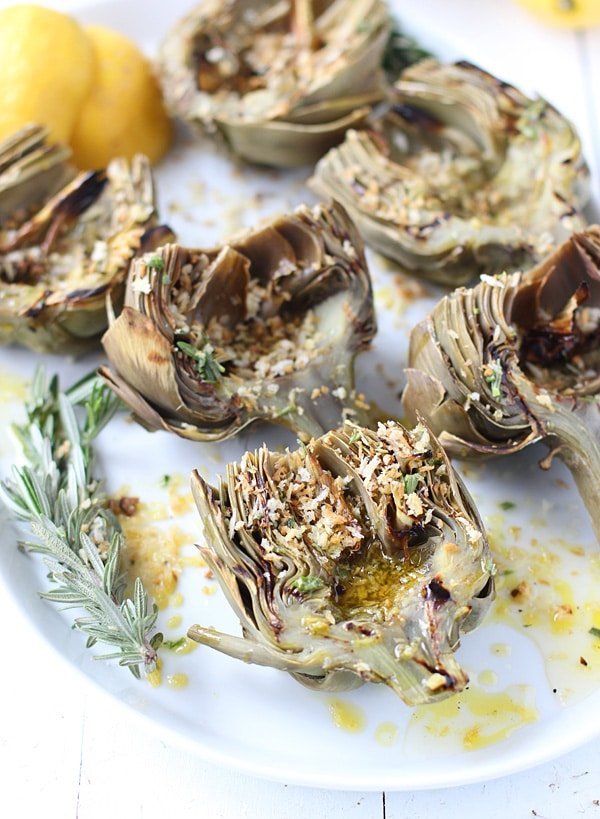 In the spring and summer my refrigerator is overflowing with veggies and fresh herbs.

Plump cherry tomatoes, summer squash, sweet corn, funky looking heirloom tomatoes, bright green chives, hearty asparagus, woodsy rosemary – pretty much anything you can find at the farmer’s market (or in my backyard) is in the crisper at any given point in time.

Oftentimes there isn’t even enough room to hold the abundance of veggies I bring home with me and the overflow is shuffled on over to the fruits section, stuffed alongside the eggs or completely hiding the bottles of beer I ever-so-carefully lined up.

The one vegetable that doesn’t get nearly enough love in my fridge, but is perhaps my favorite veggie of all time, is a fresh artichoke. Currently, I have no less than seven artichoke recipes in my food journal just waiting for the chance to be made, but every time I pass by a bucketful of them at the market, I stop, glance, and then wistfully walk on by when a big tub of avocados on sale for ninety-nine cents catches my eye. 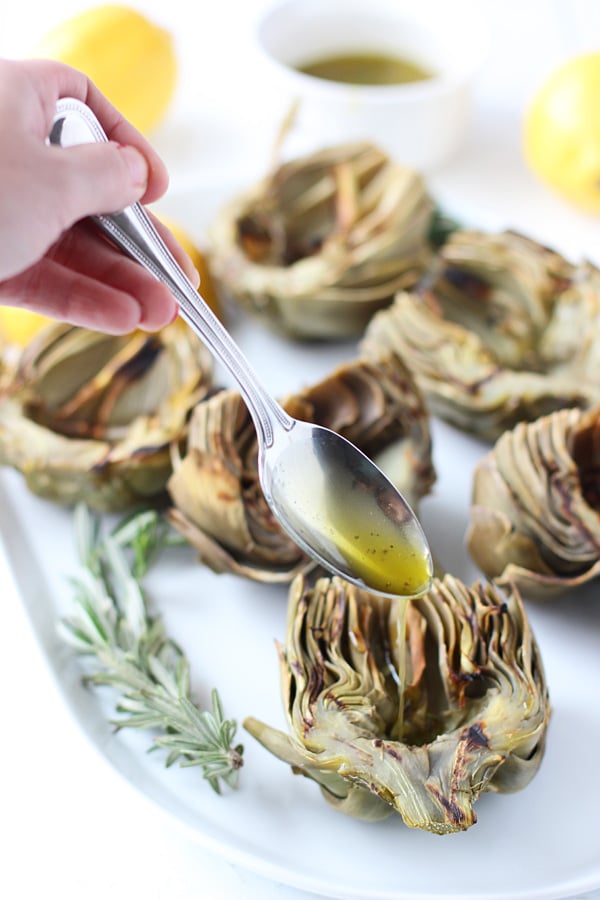 Artichokes: A labor of love.

I think maybe it’s the idea of cooking with fresh artichokes that I’m more into than actually cooking with them. They are a bit of pain, aren’t they? The stems need to be trimmed, the purple choke needs to be removed, and goshdarnit, those prickly ends are like little knives, just waiting to slice tiny cuts all over your hands.

BUT with that said, after the cuts, after the trimming, and after the cooking, it’s all worth it, because the end result, even if served completely plain, is like a treasured jewel.

The leaves become pliable and so soft you can scrape the flesh right off; the heart, which was once tough and not exactly appetizing, becomes tender and briny.

It’s kind of like eating lobster or crab, yes, it’s a lot of work, but after you’re done eating, it’s almost like you’ve accomplished something – there aren’t many foods you can say that about. 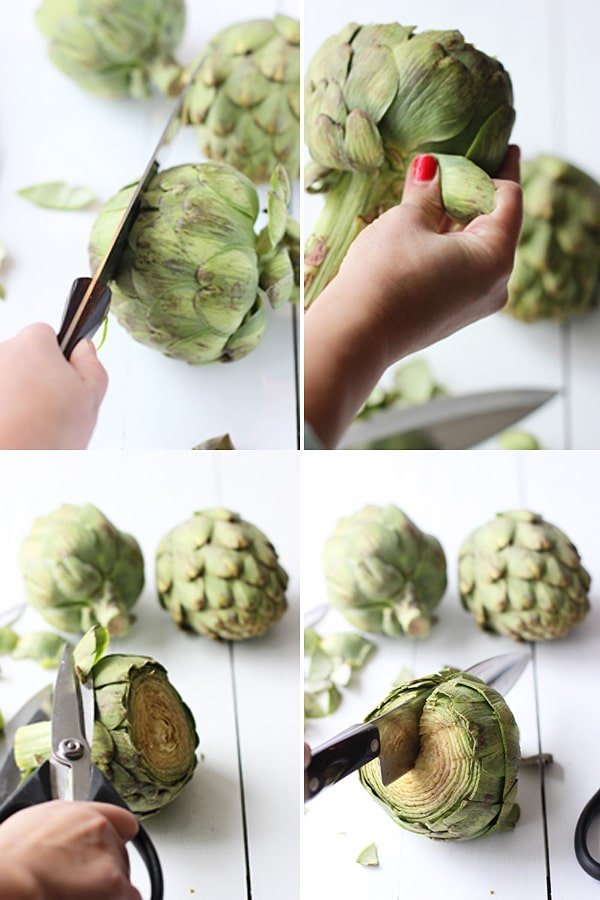 How to clean artichokes

Cut off the top. You want to cup off about the top third of the artichoke. This gets rid of any pointy edges that can poke and prod at your, and also makes the artichokes look more uniform and prett,.

Remove the super fibrous outer leaves and bottom leaves. Those tough, thick leaves don’t have much meat on them, so you don’t need to save them.

Using kitchen shears, snip off any other prickly points you see. Again, we want to eat the artichokes, not be injured by them.

Cut them in half. Using a sharp chef’s knife, cut the artichokes in half lengthwise. You should be able to see the fuzzy purple choke.

Clean them out. Use a spoon to scrape out all of the purple, fuzzy choke. Be sure you don’t remove any of the heart.  You’re ready to cook! 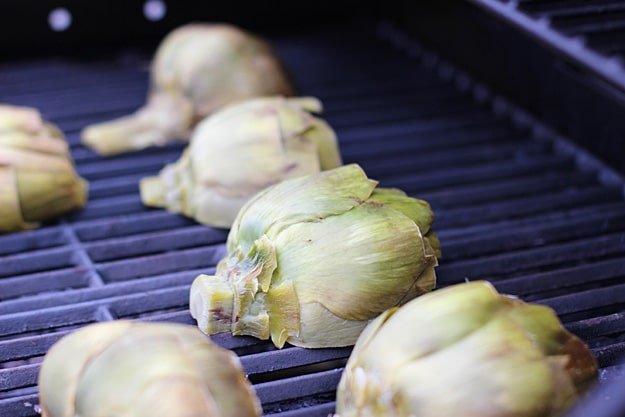 How to make this grilled artichoke recipe

Being my inaugural artichoke of spring and all, I wanted to keep things relatively simple, and of course, utilize the tool we wait all winter long to use – the grill. This grilled artichoke recipe is the perfect way to make the artichoke the start, here’s how it’s done.

Grill. Once they’re tender, remove them from the pot and dry the artichokes off. Brush them with olive oil and season with plenty of salt and pepper. Throw them on to the grill, flat-side down. Grilll until perfectly charred and smoke-kissed.

Make the vinaigrette and the bread crumbs. While the grill is doing it’s thing, throw together a super simple rosemary lemon vinaigrette with just three ingredients – rosemary, lemon and olive oil. Whisk the lemon juice into the olive oil, add freshly chopped rosemary and season with salt and pepper.

Finish the grilled artichokes up! Once the artichokes are fresh off the grill, I quickly spoon the vinaigrette over the top. The residual heat from each of the artichokes wilts the chopped rosemary and infuses hints of lemon and rosemary into the layers of each leave. Season again with salt and pepper and serve! 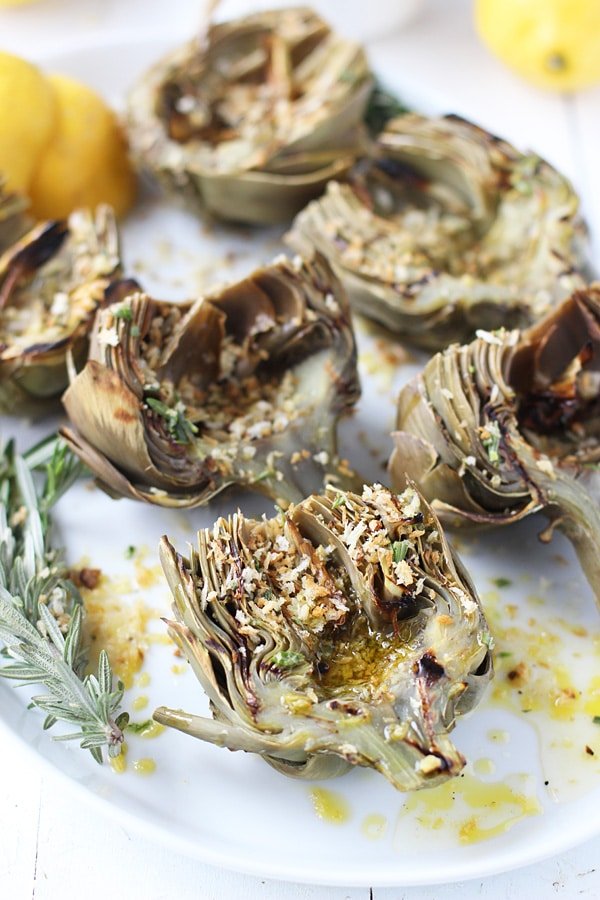 How to eat grilled artichokes

I like to start by picking off all the leaves and using my teeth to scrape all of the meat off of the inside of the leaves. Dip the leaves in any of the vinaigrette and breadcrumbs lurking around the serving platter or your plate.

When you get to the soft artichoke heart center, you can either use a fork and knife to cut it and eat the sweet, tender meat, or you can just use your fingers to soak up any leftover vinaigrette and breadcrumbs and eat them as is.

Other artichoke recipes we love. 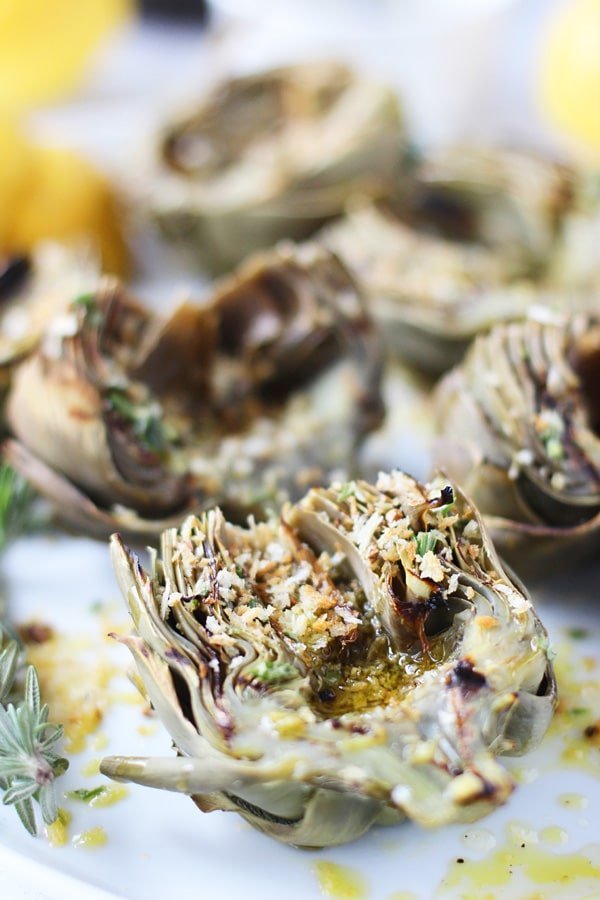 Print Rate Email
This Grilled Artichoke Recipe with Garlic Bread Crumbs is such an easy, fresh way to prepare artichokes. Halve the artichokes, brush them with olive oil, salt and pepper, and grill until soft. We sprinkle them with a crispy garlicky breadcrumb, and then drizzle them with an easy vinaigrette. Easy and delicious!
Prevent your screen from going dark
6 halves artichokes