Whole Wheat and Zucchini Spaghetti with Broccoli Pesto and Burrata is such a great way to satisfy that carb craving we all have, without all the guilt. Instead of a bowl-full of pasta, we did an even ration of zucchini noodles to whole-wheat pasta. Each strand is twirled with an easy broccoli pesto and parmesan pesto, and then topped off with creamy burrata cheese.

For more healthy pastas, be sure to check out this Cheesy Baked Penne with Broccoli Pesto, this Lemony Roasted Chicken & Broccoli Rotini , and this One Pot Healthier Spaghetti and Meatballs. 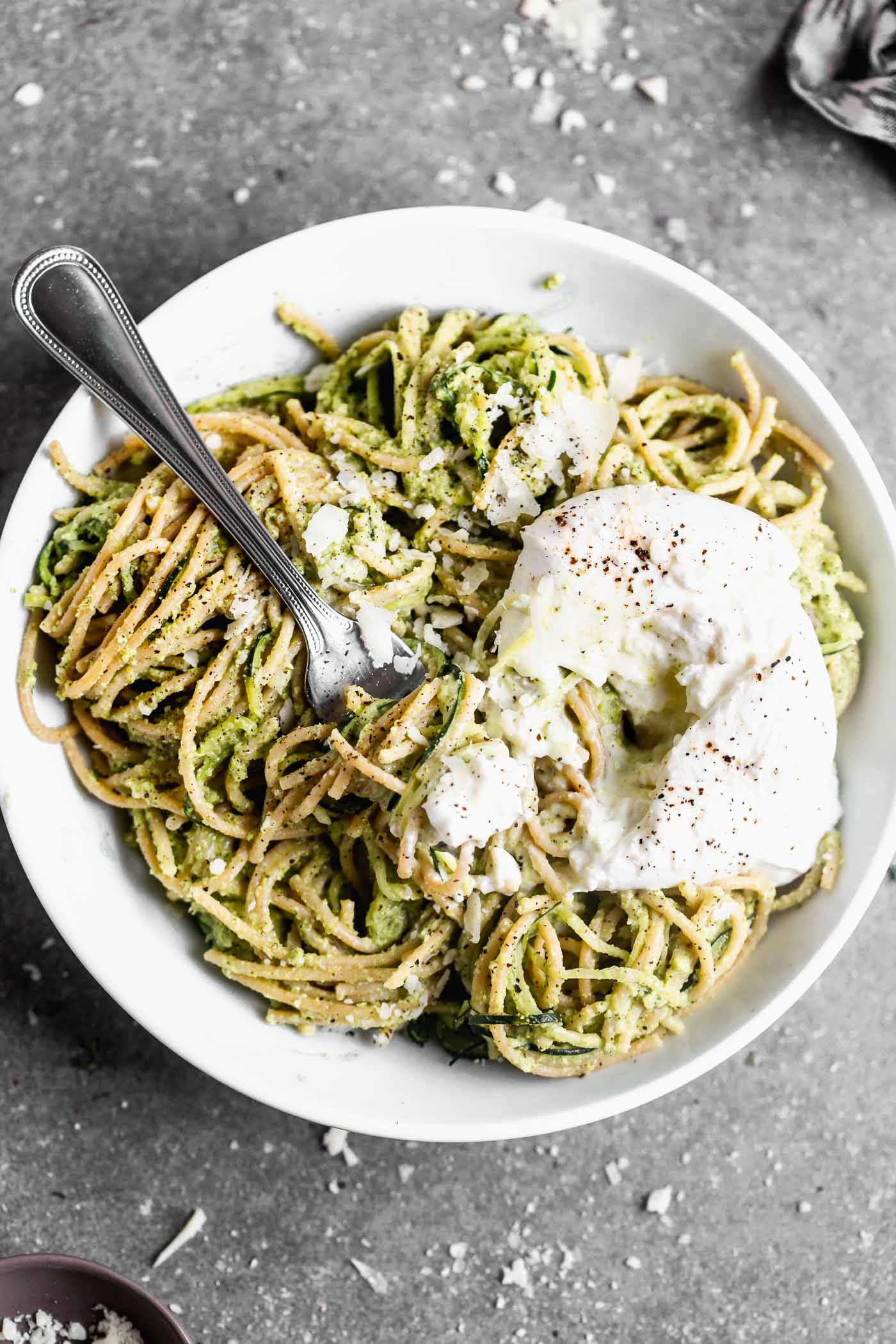 Whole Wheat and Zucchini Spaghetti with Broccoli Pesto and Burrata

I don’t know about you, but just because the snow melts from the ground and the sun is pretty much a permanent fixture in our daily lives, it doesn’t mean I’ve forgotten about my one true love. Pasta.

Even in the heat of summer, I still crave carbs, and I crave them something fierce. Which can be a problem. This healthy-meets-indulgent pasta is the answer to all of those problems.

With an even ratio of silky zucchini and whole-wheat noodles, this leaves me feeling light and nimble, but fills up my seemingly bottomless stomach very nicely at the same time. Always a win when it comes to pasta. 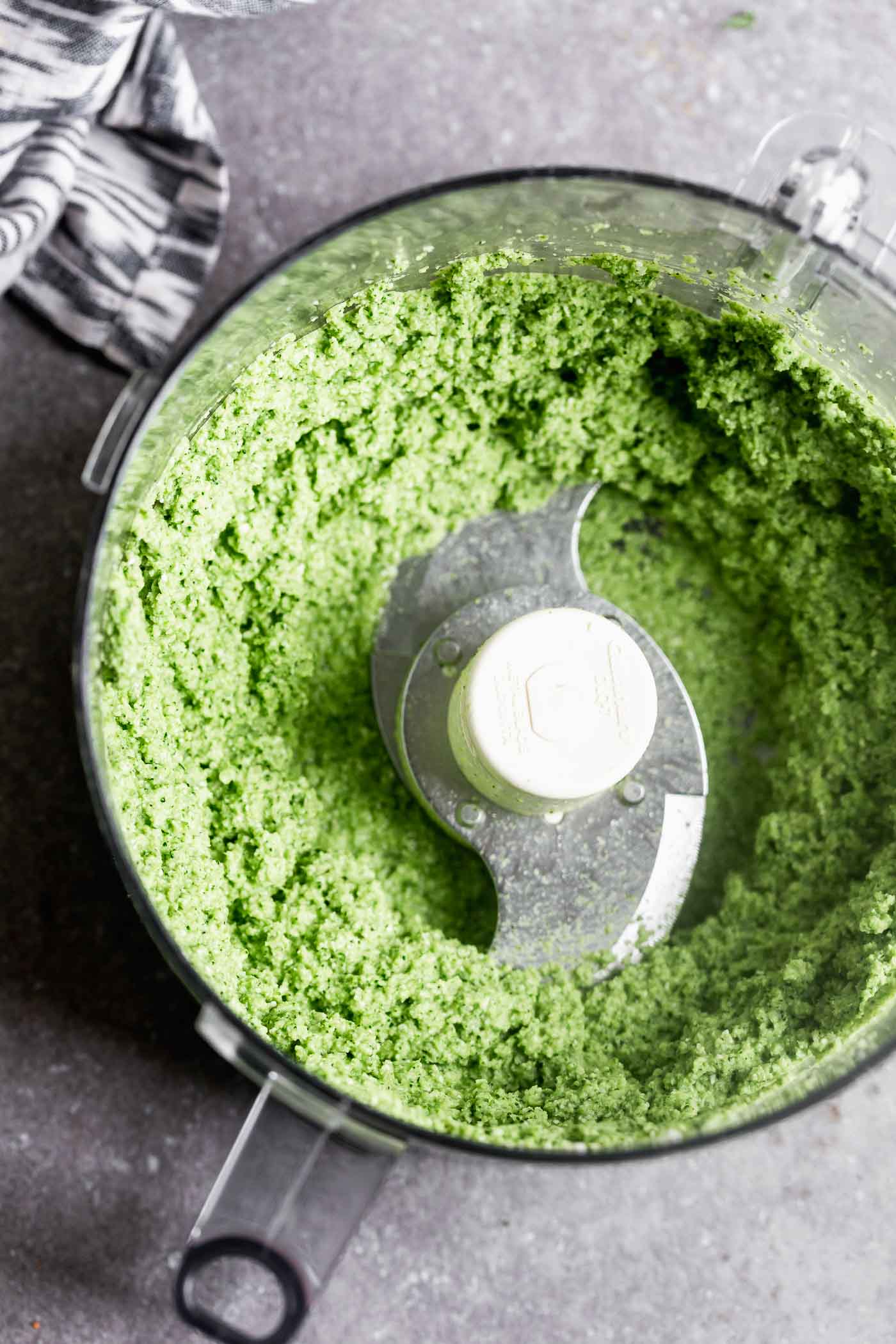 After each set of noodles is cooked, they’re simultaneously  twirled in a ridiculously easy (and also healthy!) broccoli pesto (very similar to this I made a few years ago), and then splashed with a little bit of extra pasta water to thin out the sauce a bit.

And then comes the best part…Burrata. Creamy, luxurious, burrata. What I like to do is plate all of the pasta, and then top off each portion with a generous amount of creamy burrata. You have to be sure to evenly cut it in half, because every person needs an equal amount of that silky-smooth cream center.

This is one of those meals that upon first glance, looks seriously impressive, but is honestly really easy to put together, which makes it one of my favorite summer meals of all time. 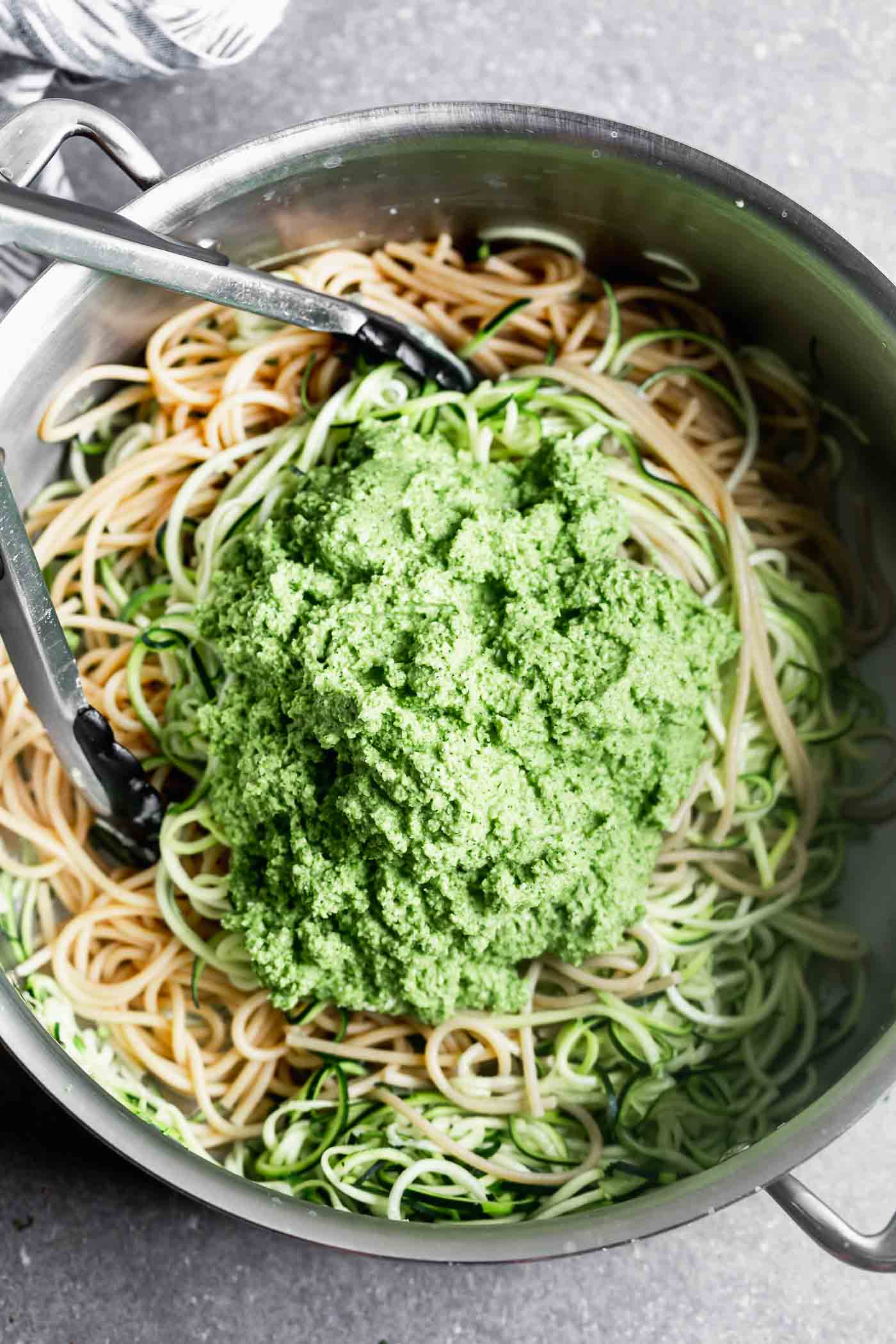 As you can see, the ingredient list is eerily similar to a traditional pesto, but because of the broccoli, it takes on an entirely different taste, in a good way! Don’t get me wrong, I am all about a tradition pesto, but sometimes, it’s nice to switch things up a bit, plus I love that my family is getting a disguised version of veggies I’m not force-feeding. 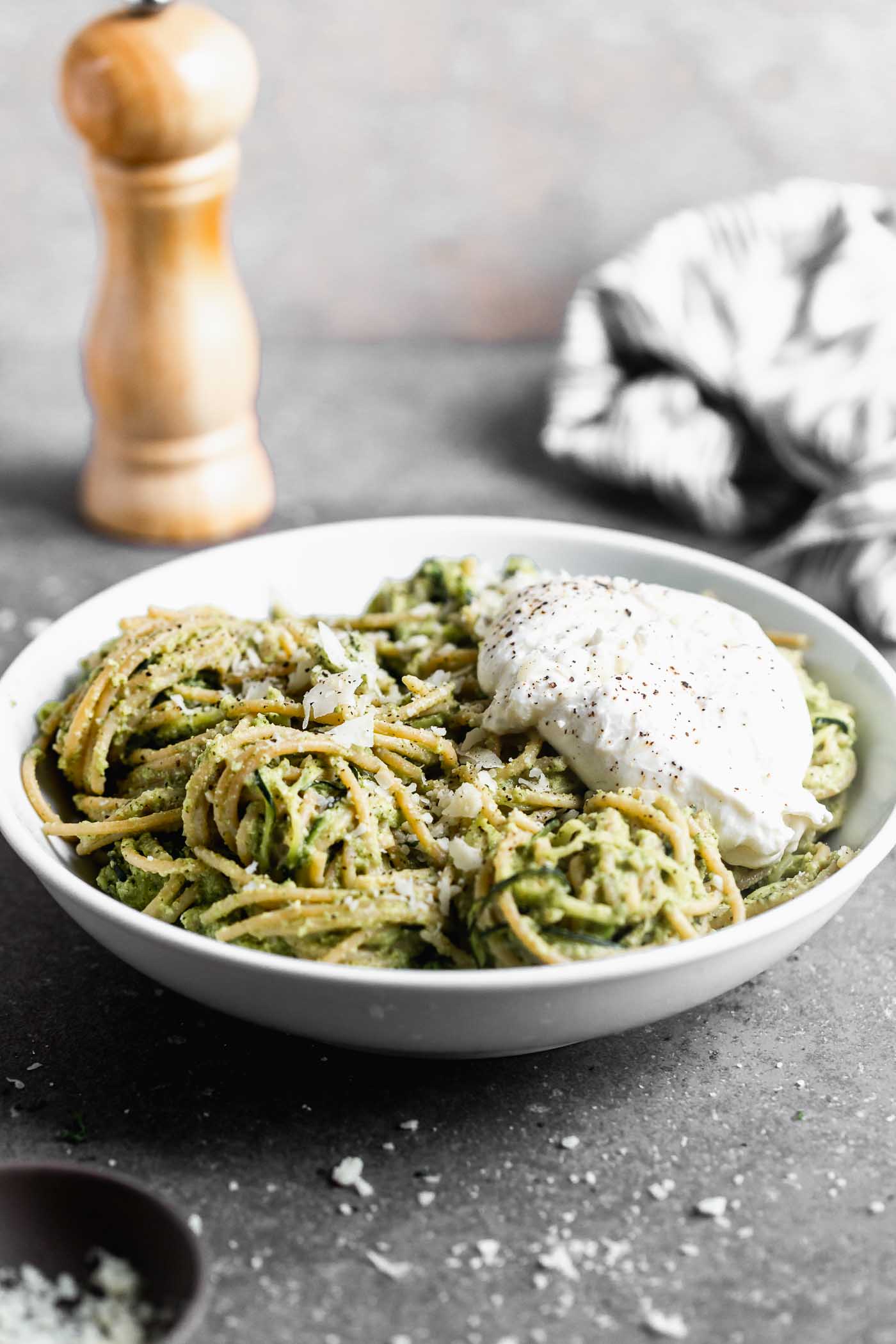 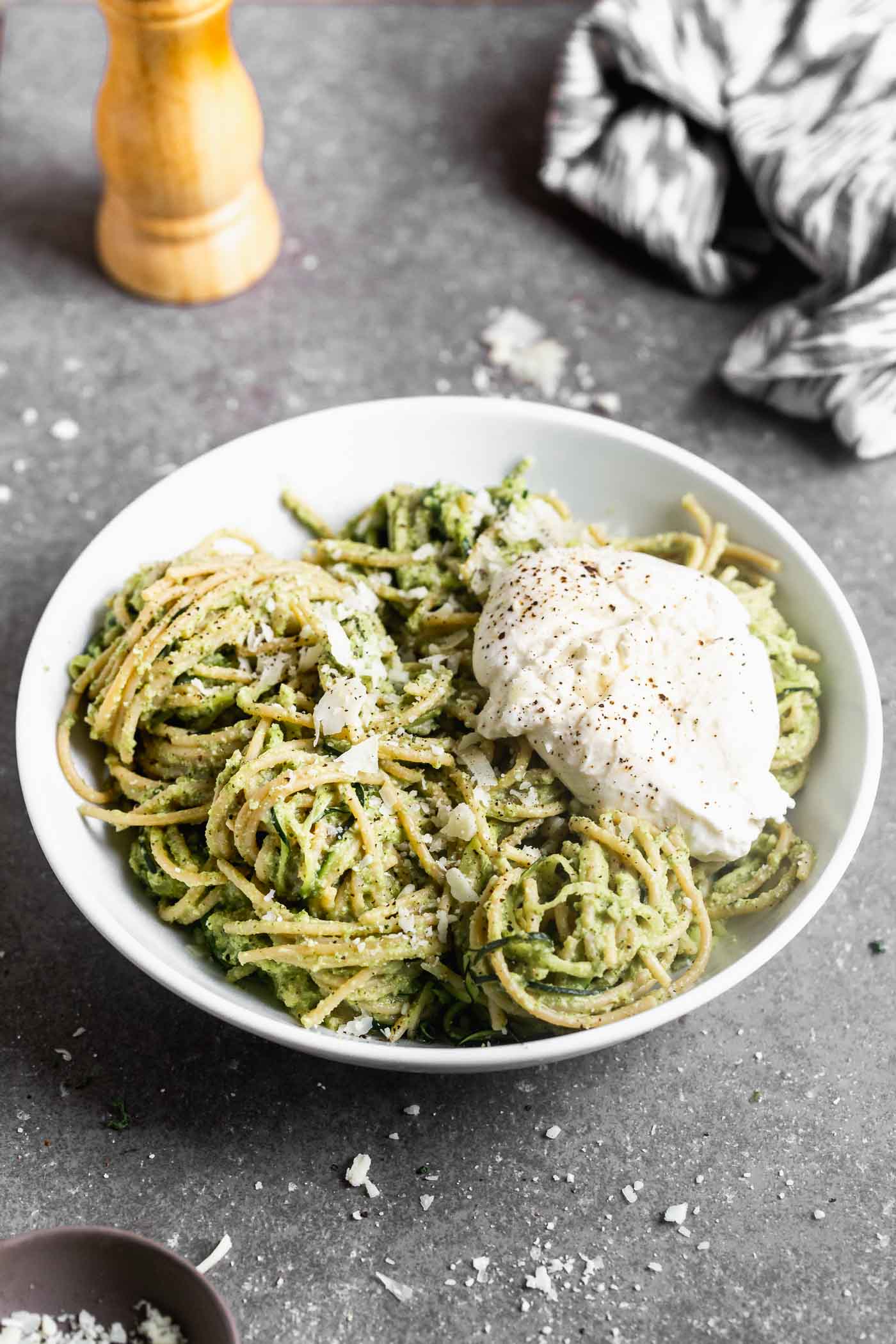 What if I don’t have a spiralizer?

If you don’t have a spiralizer or you just don’t feel like making your own noodles, you can buy pre-spiralized noodles. I can find them at pretty much any grocery store these days, but I know they have them at Trader Joe’s, Whole Food, and for locals, HyVee.

Do I have to use spaghetti?

Angel hair or bucatini would also work, but I think spaghetti has about the same width as most zucchini noodles, so it’s really what works best.

Can I cook the broccoli before??

Yes! Since the broccoli only partially cooks out while you toss the pasta, if you aren’t into the raw taste of broccoli, you can absolutely roast it before. I actually have a similar recipe for broccoli pesto we posted a few years ago, so I’d reference that if you have any questions. 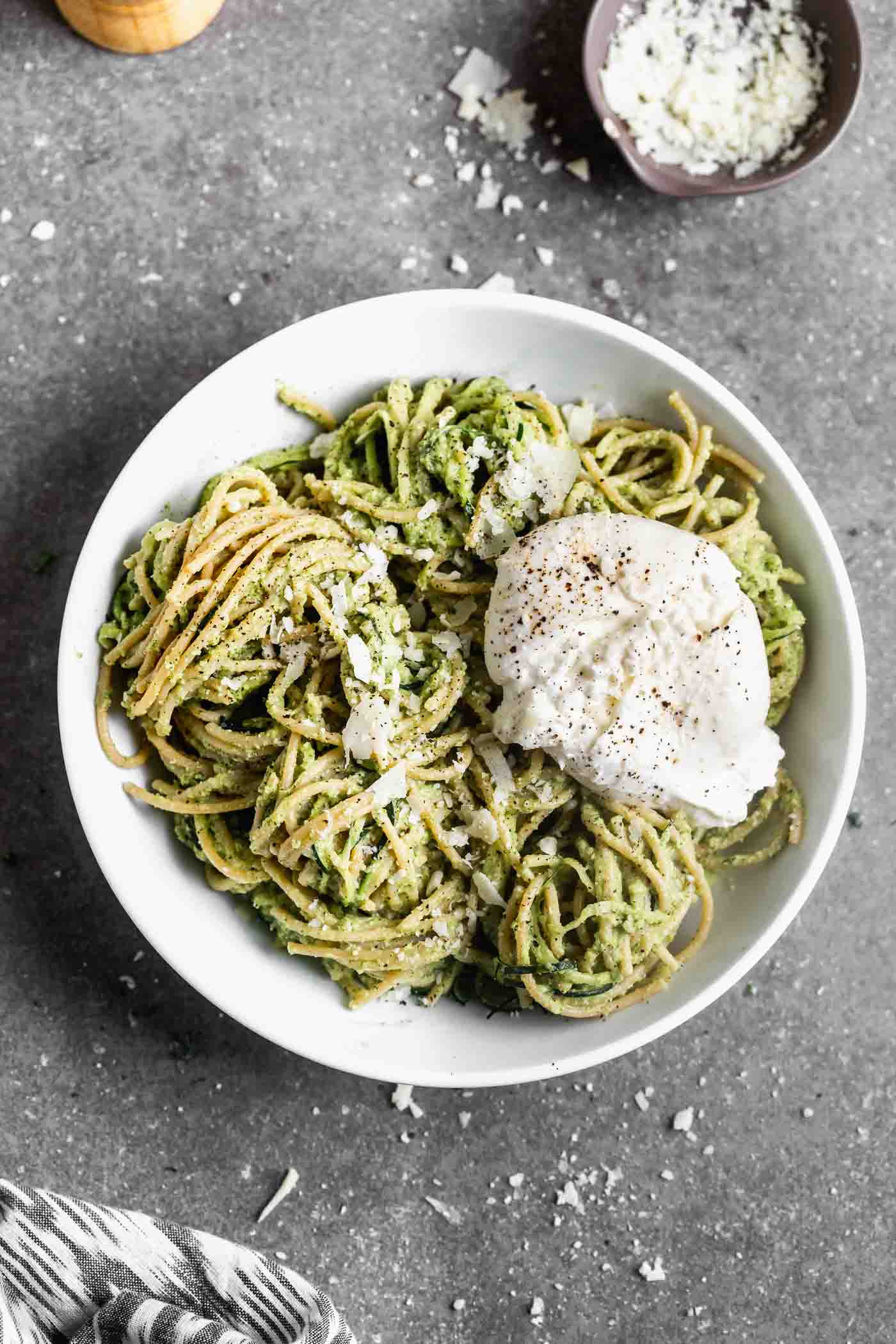 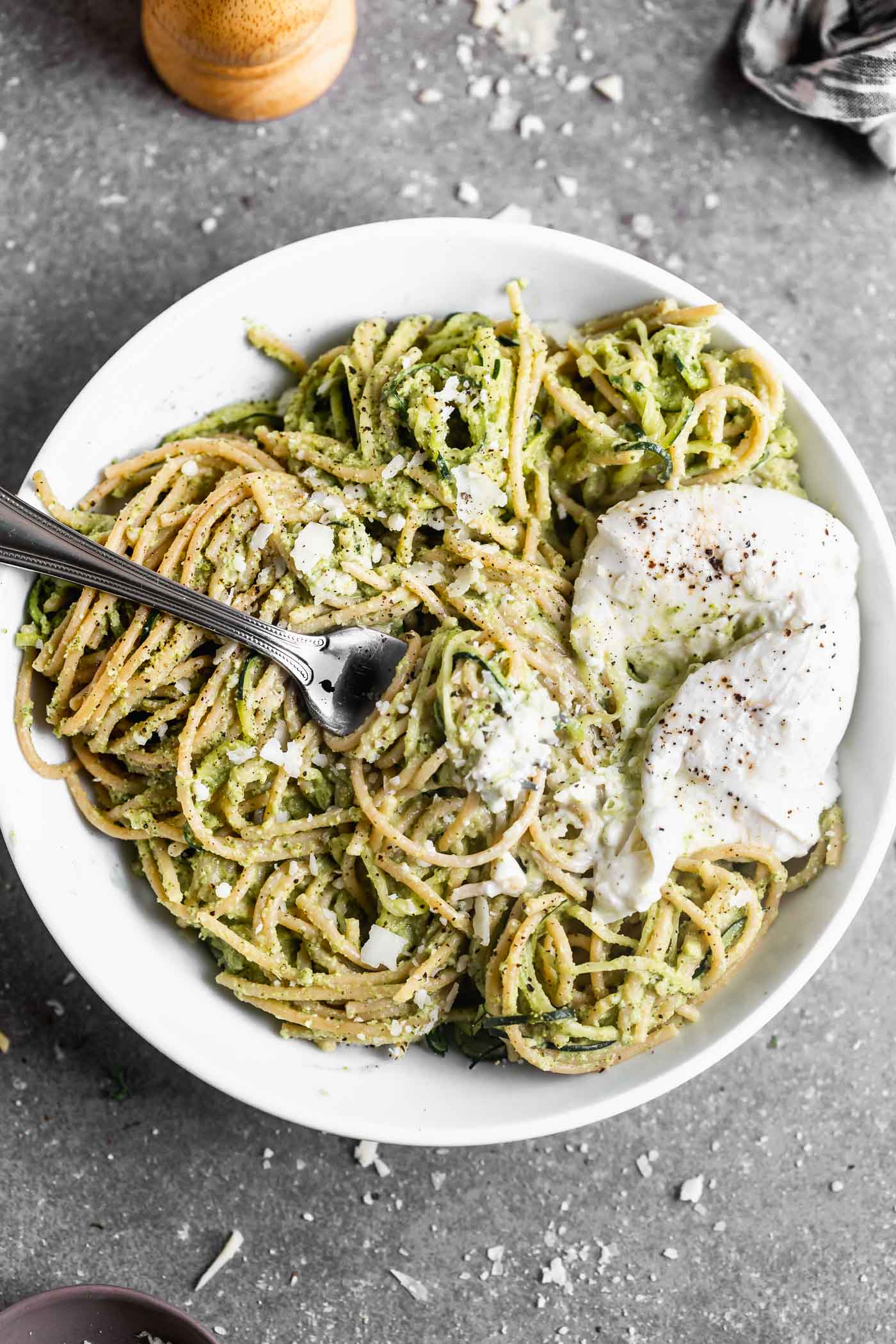