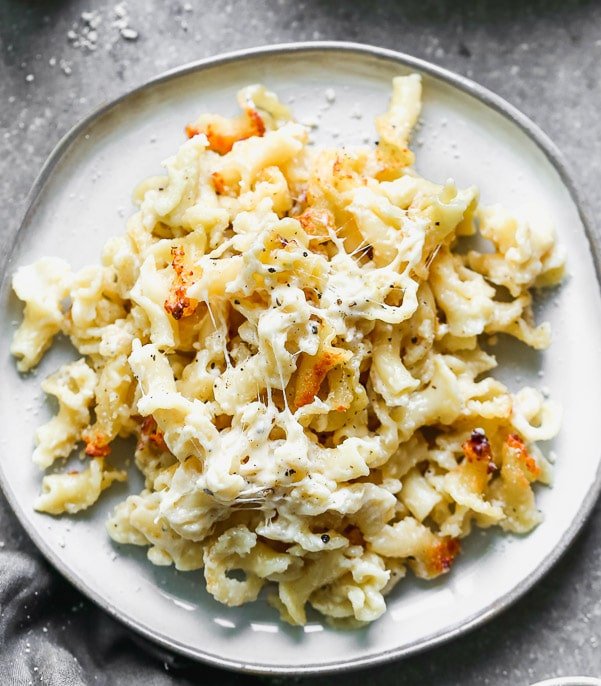 I don’t know what Friday means to you, but to me means there’s an official invitation to enjoy a cocktail or two and an open door to indulge in my favorite foods. Sometimes that means a juicy cheeseburger with fries and a slightly dirty martini. Some days I crave a giant St. Louis-style pizza an IPA. Today, that invitation means free reign to sip on a glass of rosé and dive head first into this cheesy pasta gratin.

Now, I don’t want you guys to get a pasta gratin confused with a classic mac and cheese. Because this is not your average batch of Mac. While they do share some of the same elements – pasta, cheese, and cream – they are slightly different. A pasta gratin is more cheese-forward, instead of sauce-forward, if that makes sense. For me, I want the focus of this pasta gratin to be the aldente pasta and the gooey, stringy cheese, not a super creamy sauce as we usually have in a Mac and cheese.

Pasta gratin is simple. There’s no béchamel, or fancy broccoli cheddar concoction. Just a big casserole of aldente noodles, luxurious heavy cream, nutty parmesan cheese, and sharp cheddar cheddar all baked together until gooey and creamy in the middle and crispy and brown on the top. 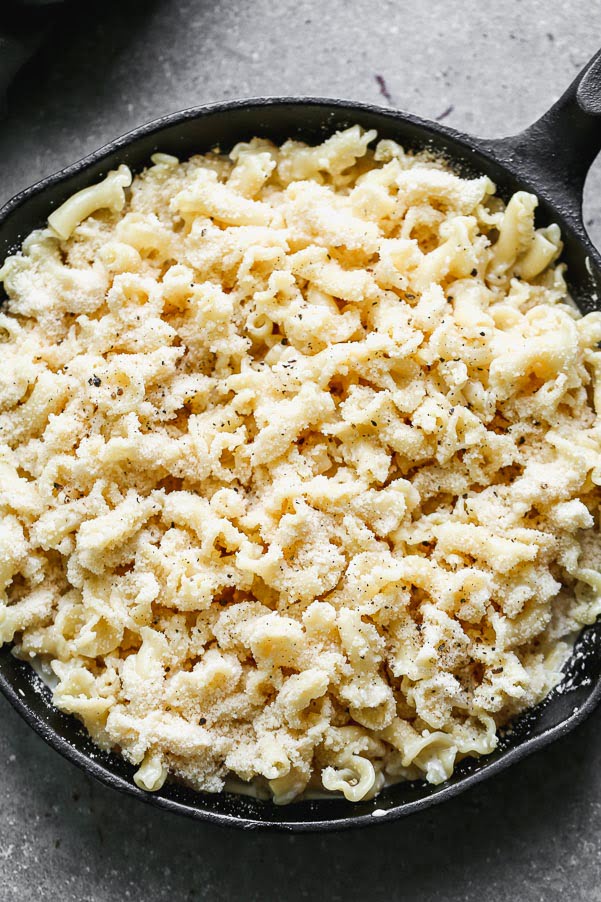 Ingredients in our Cheesy Pasta Gratin

Pasta. You can use virtually any pasta you want here except a long-stranded pasta. I let Teddy pick out the pasta since he typically dives into foods he feel like he chose to eat. He went with a campanelle (a squiggly bell-shaped pasta with a hollow sauce for catching sauce), which I think was a lovely choice. It clings to cheese and soaks up the cream wonderfully, but a good campanelle substitute would be penne, elbows, bowties, or cellentani.

Cheddar cheese. I use a super sharp white cheddar cheese, but any sharp cheddar will work.

Heavy cream. Ok, so heavy cream is aggressive. I know. But because we use heavy cream, you don’t have to make a béchamel of sorts. While the pasta bakes, the cream thickens and melts with these cheese, creating a super thick, cheesy sauce. It’s kind of heavenly.

Dijon mustard. A little bit of dijon mustard is an addition that adds just a subtle hint of flavor that’s almost undetectable. 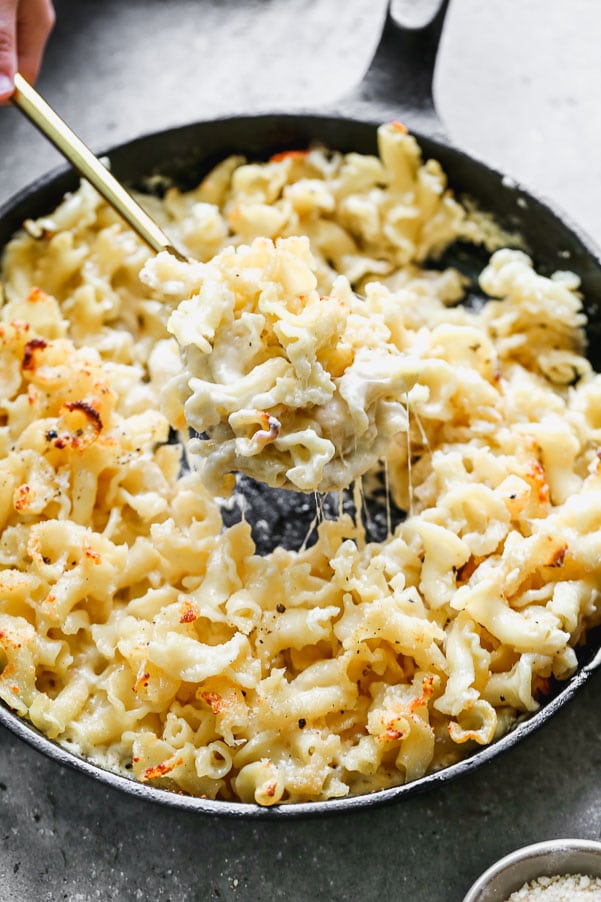 How to make Cheesy Pasta Gratin

Guys, it’s almost silly to list out the instructions for this pasta gratin, because it’s so darn easy.

Cook the pasta. Because the pasta is going to cook for a good amount of time in the oven, you barely want to cook the pasta, about 5-6 minutes before draining. Drain the pasta.

Pour the cream into the pot you cooked the pasta in and add the salt and dijon. Whisk to combine. Add the pasta back to the pot and toss.

Layer it up. Grease a  large cast-iron skillet or 9×9 baking dish with non-stick cooking spray. Add half of the noodles to the pan. Cover with all of the cheddar cheese and half of the parmesan. Spread the rest of the noodles on top and then pour any leftover cream evenly over the dish. Top with remaining parmesan.

Bake. Bake the pasta gratin until the cheesy is brown, crusty and bubbly. 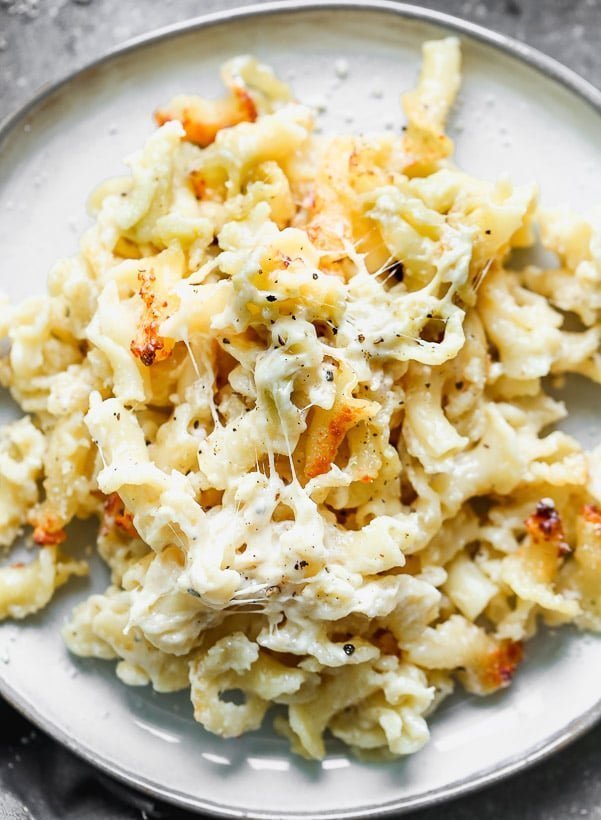 What is a gratin?

At its most basic definition a gratin simply something topped with cheese or breadcrumbs and baked until brown and crispy. For me, a pasta gratin differs from a traditional Mac and cheese because we don’t make a béchamel sauce, and the focus is more on the gooey cheese rather than the creamy sauce.

Can a pasta gratin be made in advance?

Unfortunately no. Once this is baked, it needs to be served right away. If you want to prep is ahead of time. You could cook the pasta for the five to six minutes we recommend, cool completely and then assemble everything together when it’s cold or at room temperature. When you’re ready to eat, cook as instructed.

What to serve with pasta gratin 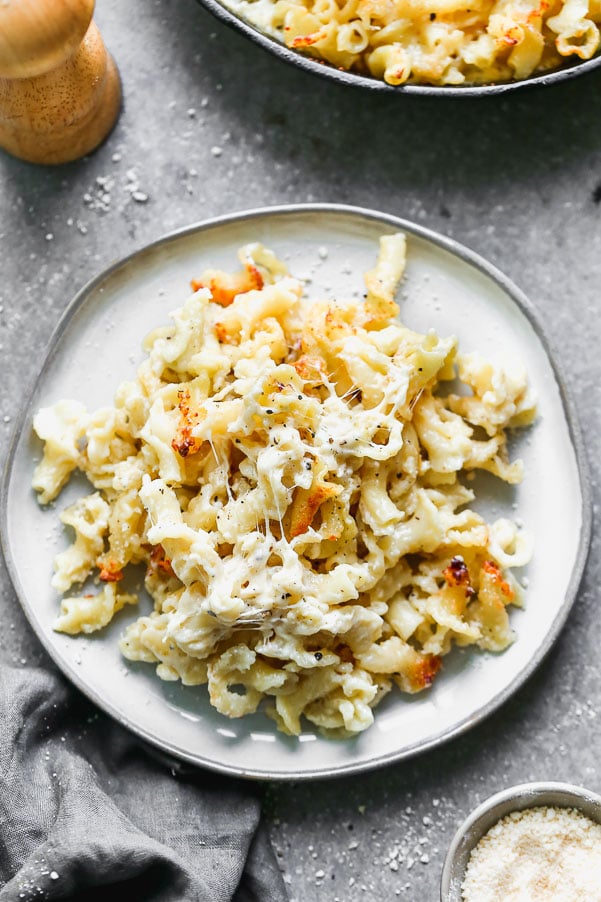 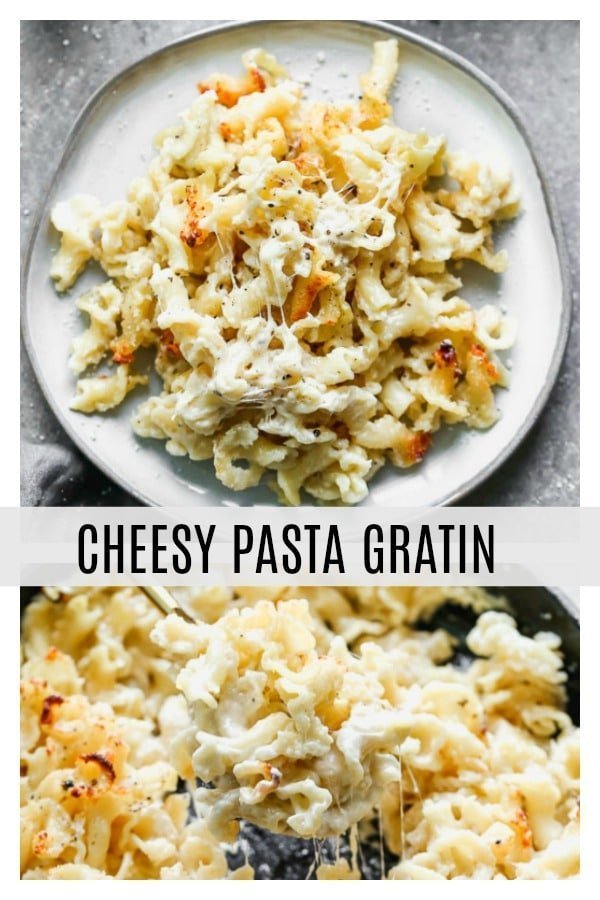