These Mini Lamb Burgers with Dill Greek Yogurt taste like a classic Greek gyro in bite-sized form. Crispy patties of ground lamb are nestled into mini pita pockets, stuffed with sliced cucumbers, and drowned in an easy dill and lemon-infused Greek yogurt. The perfect Mediterranean bite!

I have a serious passion for all things gyro, so I want to make sure you check out our Chicken Gyro Lettuce Wraps, this Chicken Gyro Salad, and these Healthy Chicken Gyros. 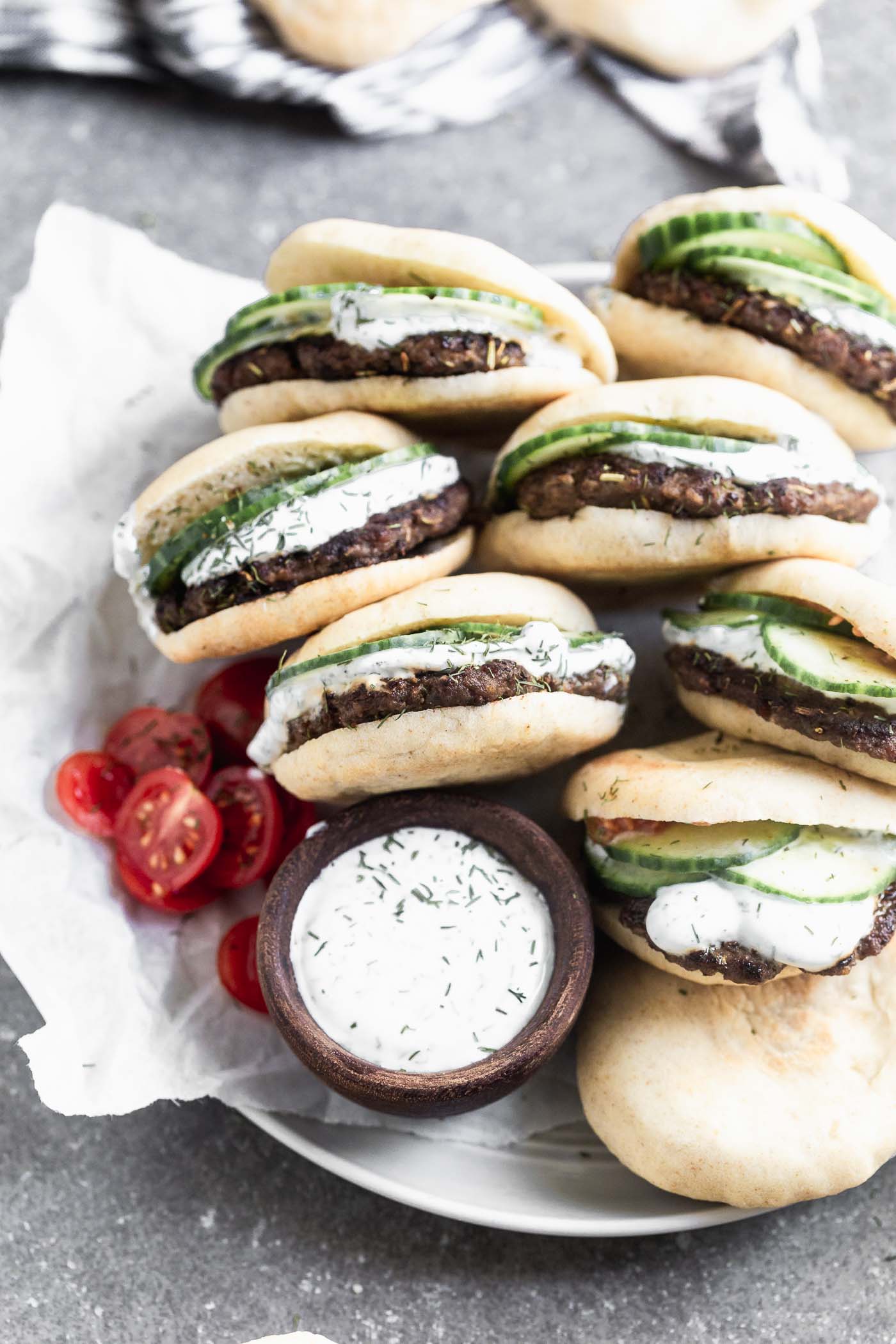 I’d like to think it’s my mediterranean roots that keep me coming back to the perfect combination of lamb + rosemary + oregano + tangy dill yogurt, but it’s likely just one of those flavor profiles anyone would fall in love with. There’s something incredibly savory and earthy about rich lamb infused with garlic  and peppered with rosemary and oregano, and I just can’t get enough of it.

If these flavors sound familiar, they should. At its core these mini burgers are basically gyros in disguise. Except instead of slow-roasting the meat on a rotisserie, I used ground lamb, all of the other traditional flavors, and then formed them into the most adorable little patties that nestle perfectly into teeny tiny pita pockets. 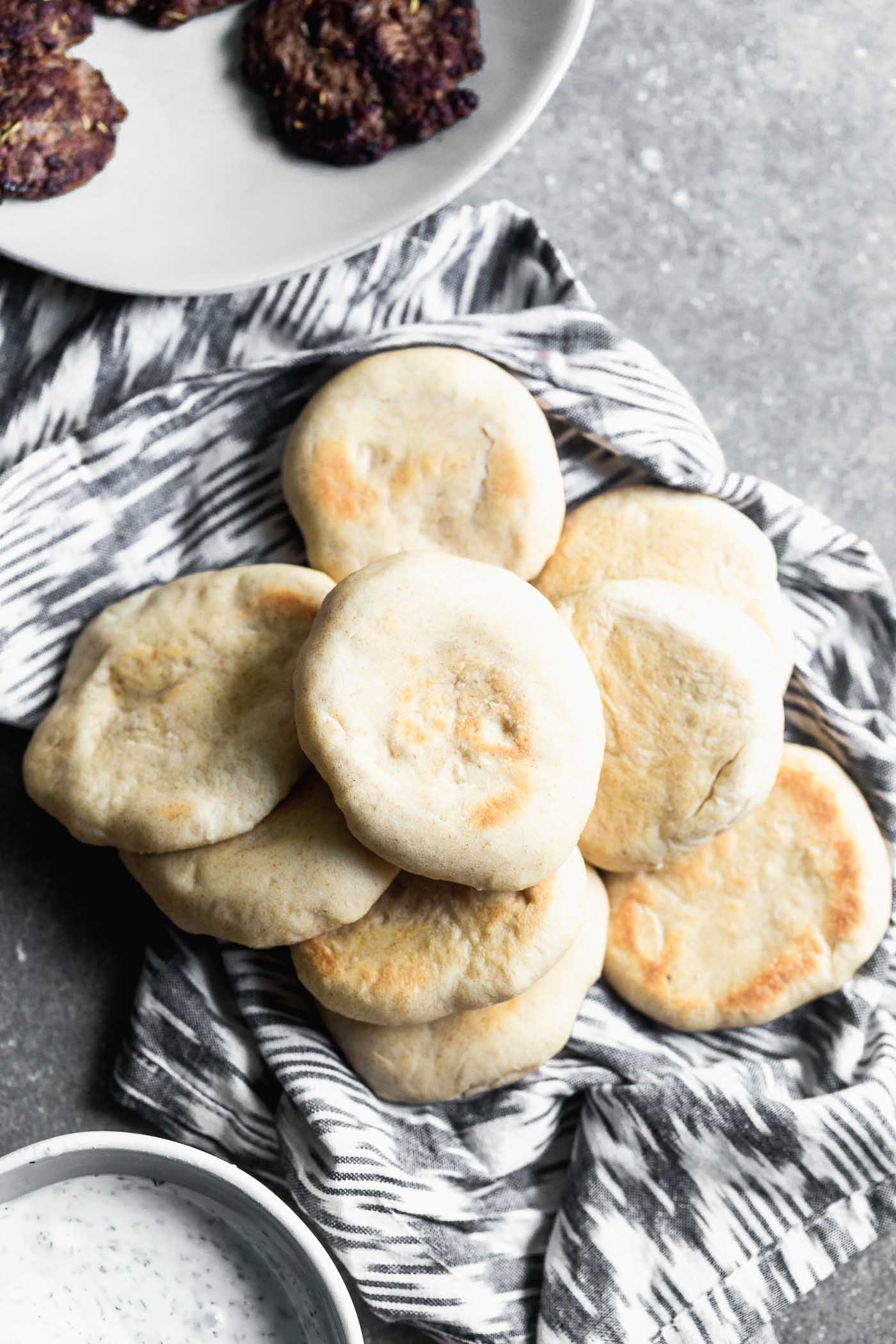 In between the soft pillowy pita and lamb patties, is a simplified version of my favorite tzatziki made with Greek yogurt, a little bit of lemon juice, and dried dill. If throwing those three ingredients together is too much work (umm please tell me it isn’t), you’re free to buy some store-bought tzatziki sauce.

Each bite-sized gyro is finished off simply with a layer of thinly sliced cucumber, but a little bit of chopped tomato or romaine is a no-brainer addition. Also, if you’re feeling little bit extra, I might suggest stuffing a few crispy, salty frozen French fries into the mix. It’s what they do in Greece, just sayin’. 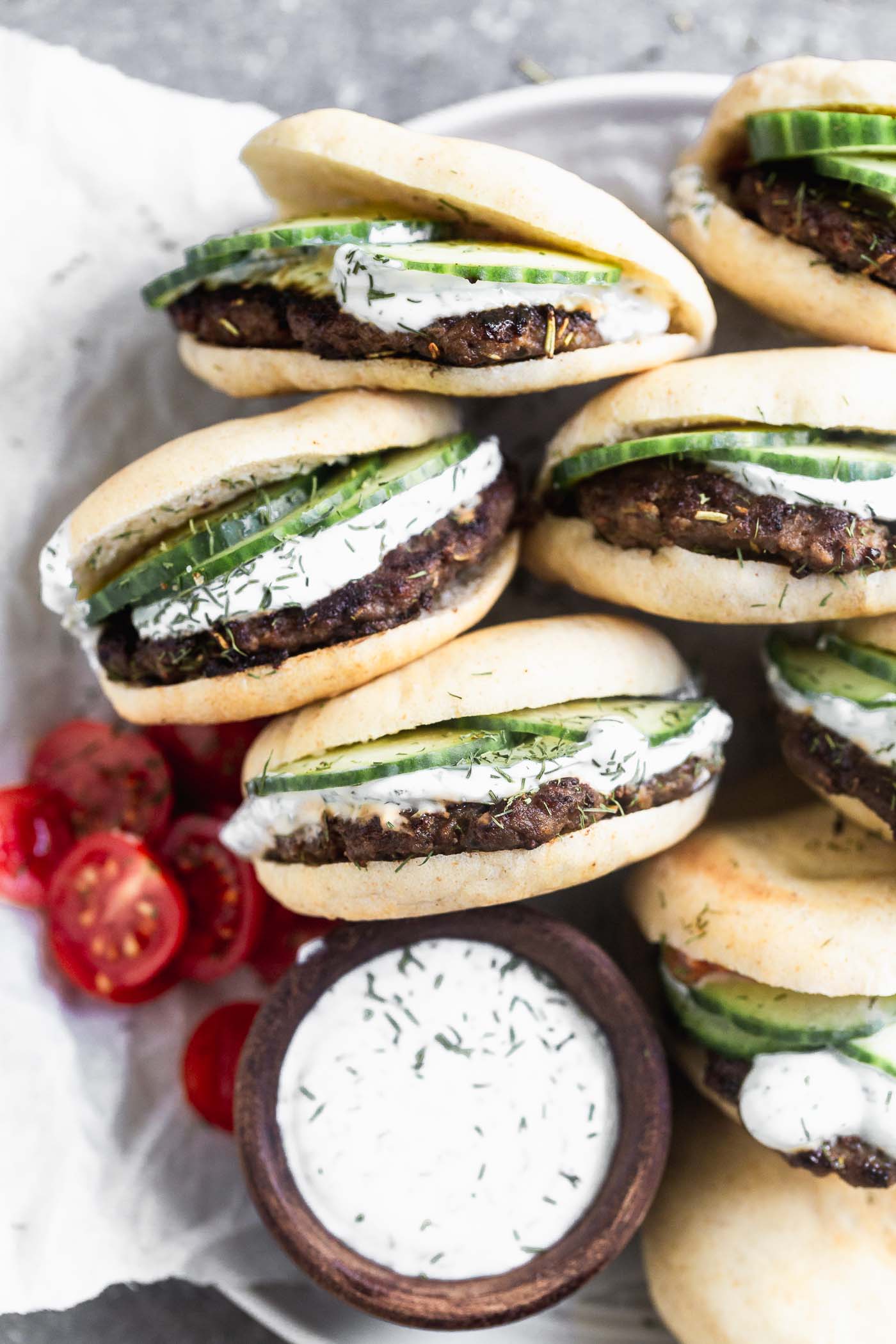 How to make Mini Lamb Burgers with Dill Greek Yogurt 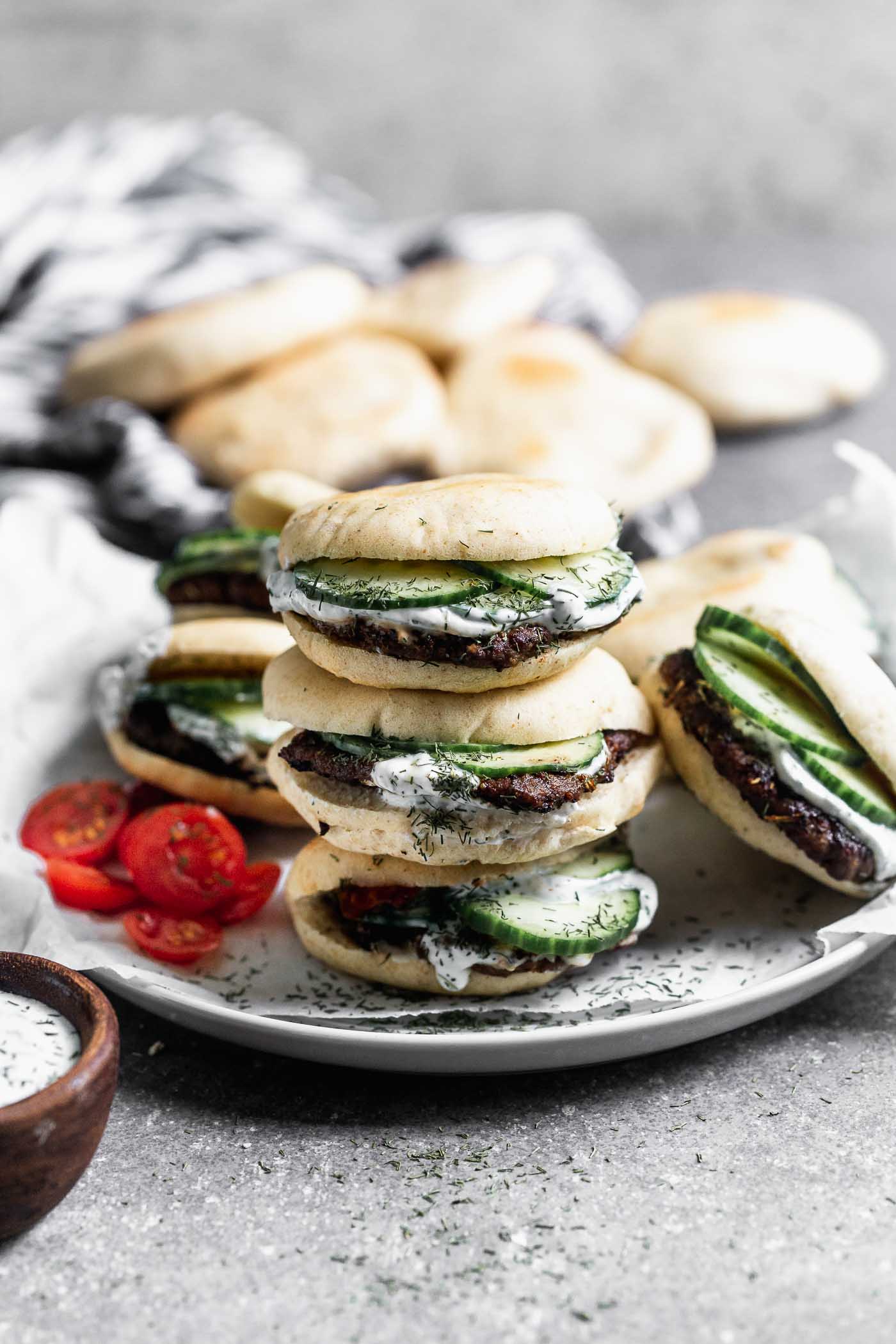 What do I cook the patties on?

I like for the patties to get super crispy, so I only use a non-stick griddle pan, like this one

, or a big cast-iron skillet. I actually prefer the griddle pan, because I can cook them all at once! So easy. I also use it ALL THE TIME for pancakes, eggs, bacon, other burgers, basically anything I want to cook in a large batch or want a great sear on.

What if I can’t find mini pitas?

So. I had this problem. My local store ALWAYS has them, and this particular day, they didn’t. So I actually just made them myself! It was SUPER easy, and I used this recipe. 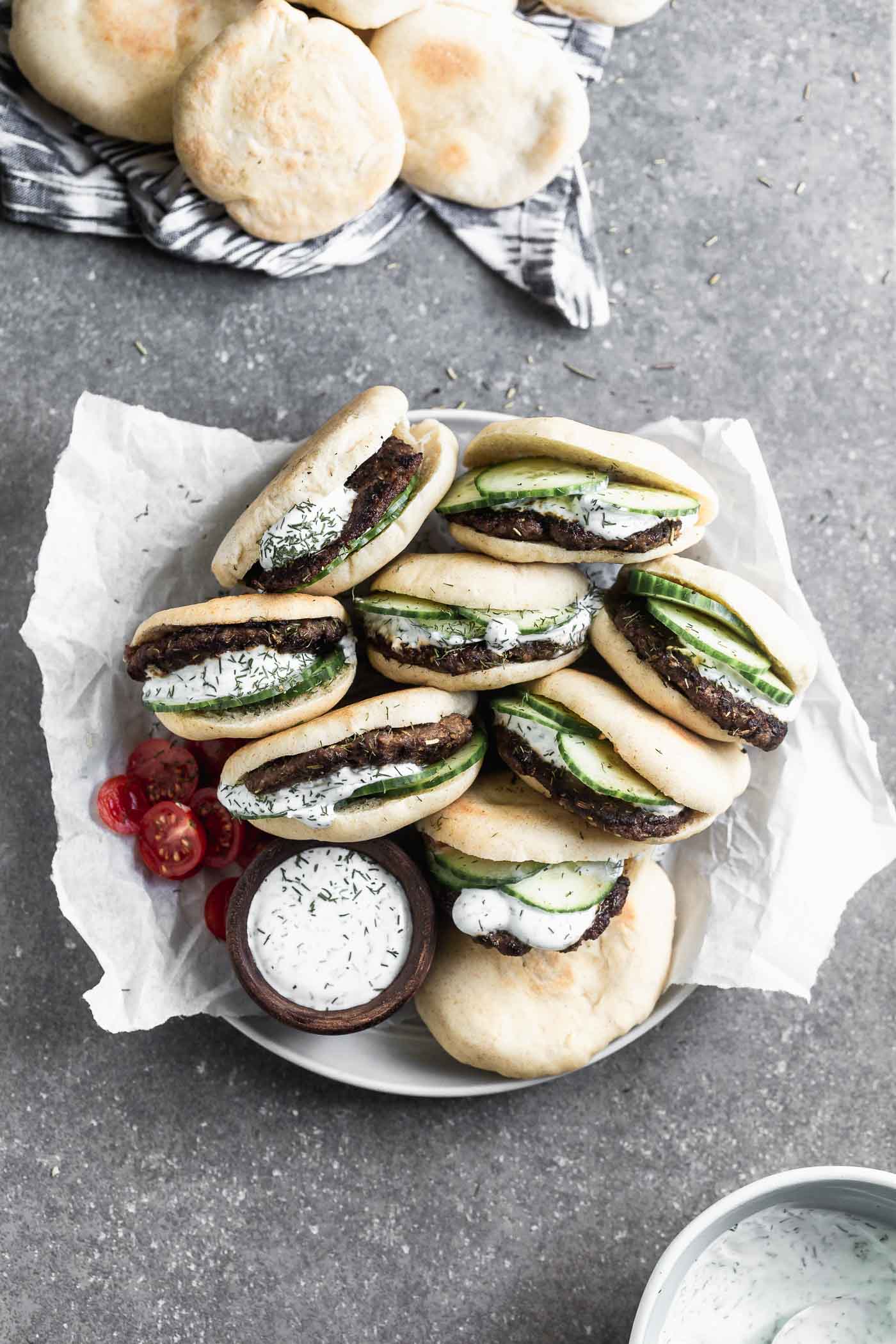 What to serve with Mini Lamb Burgers 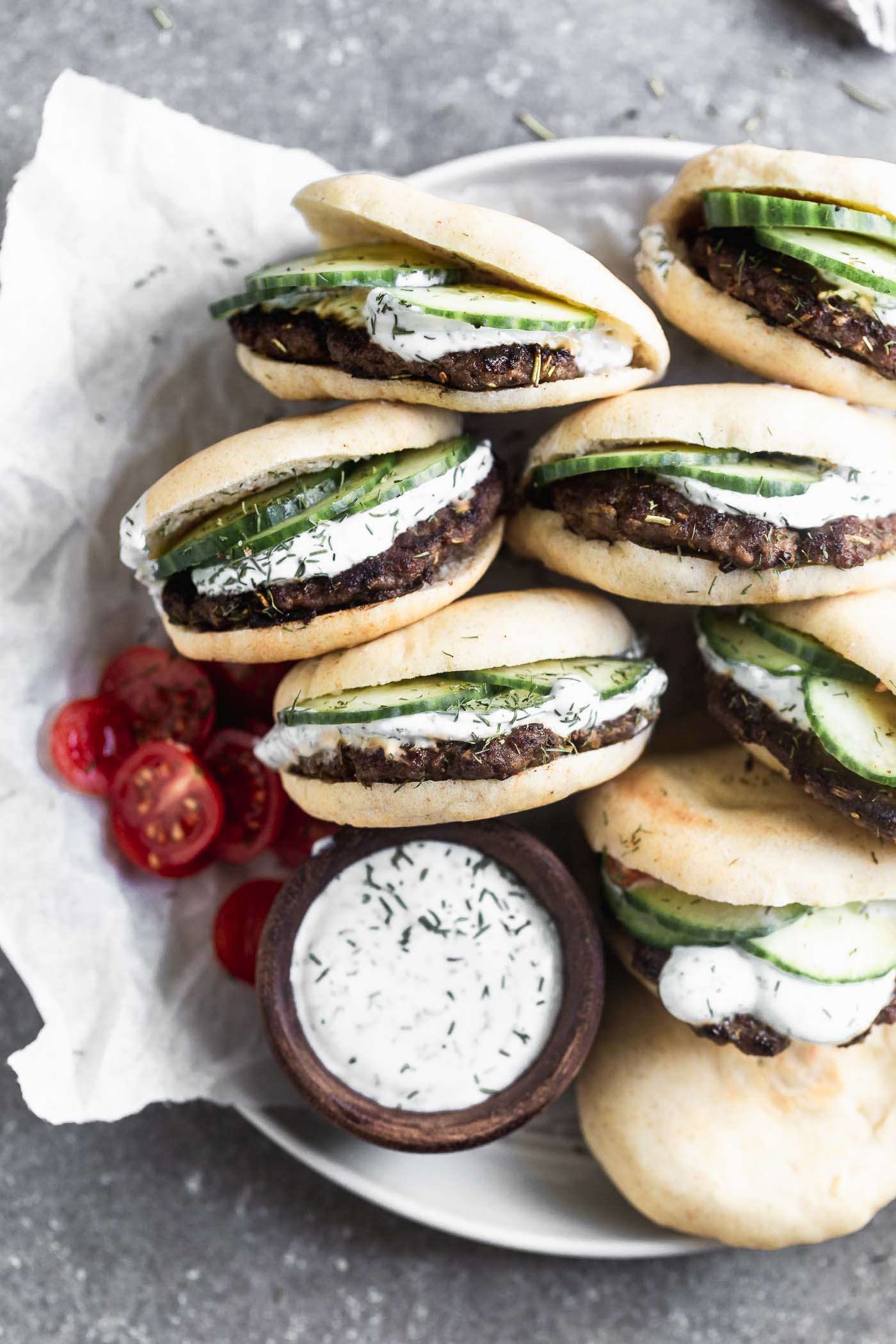