This Pastitsio Recipe (Greek Lasagna) is one of our favorite Greek casseroles! Aldente noodles are tossed with a creamy béchamel sauce and a tomato, cinnamon-laced ground beef mixture..  The noodles are then layered into a casserole dish in between more of the béchamel and meat sauce, baked until bubbly and brown, and then cut into squares. Rich and delicious! 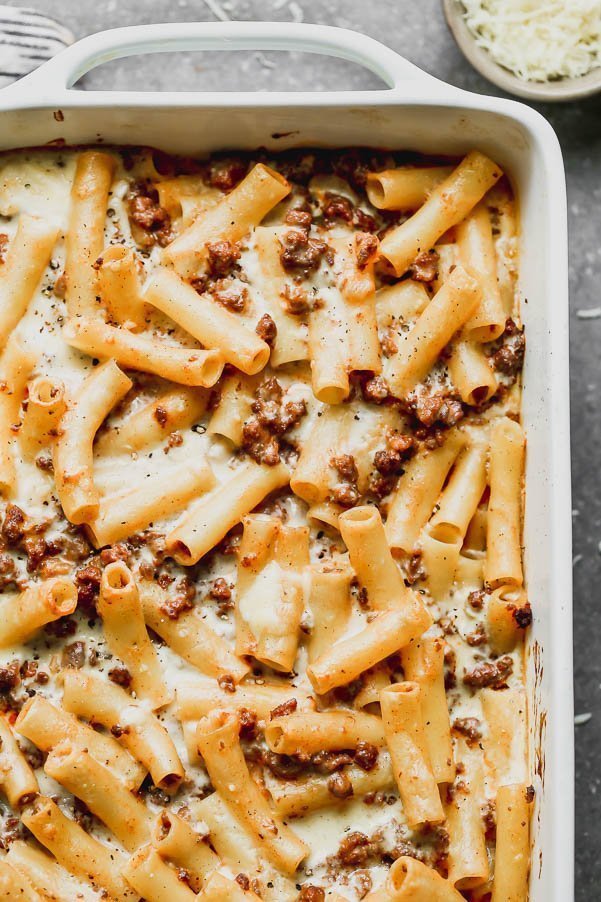 If there were ever a time to take a deep breath and throw caution to the wind when it comes to carbs, cheese, creamy sauce, and hearty beef, now would be the time. Because today, today I’m introducing you to my very favorite Greek comfort food of all time, Pastitsio, and it includes all of the above.

Suffice it say, that unlike our healthier Mediterranean dishes (like these Greek meatballs and this gyro salad), this is not a light dish.

Authentic pastitsio is basically, a Greek Lasagna. Similar to an American-Italian lasagna, meat, noodles, sauce, and cheese are layered in a casserole dish and baked, but that’s where the similarities diverge. A pastitsio recipe includes long, tubular-shaped noodles tossed with creamy béchamel and a light tomato-infused beef sauce. The lightly sauced noodles are then layered between more of the hearty beef sauce and the béchamel. It’s also sprinkled generously with grated Romano cheese for good measure.

The whole casserole is baked until bubbly and golden brown, and then left to rest for a few minutes before cutting out generous squares of the sturdy casserole.

What I love about this version of pastitsio, or a Greek Lasagna is it has warm hints of cinnamon and nutmeg throughout, which I love in a meat sauce. (We took the same idea in our One Pot Short Rib Pappardelle.) 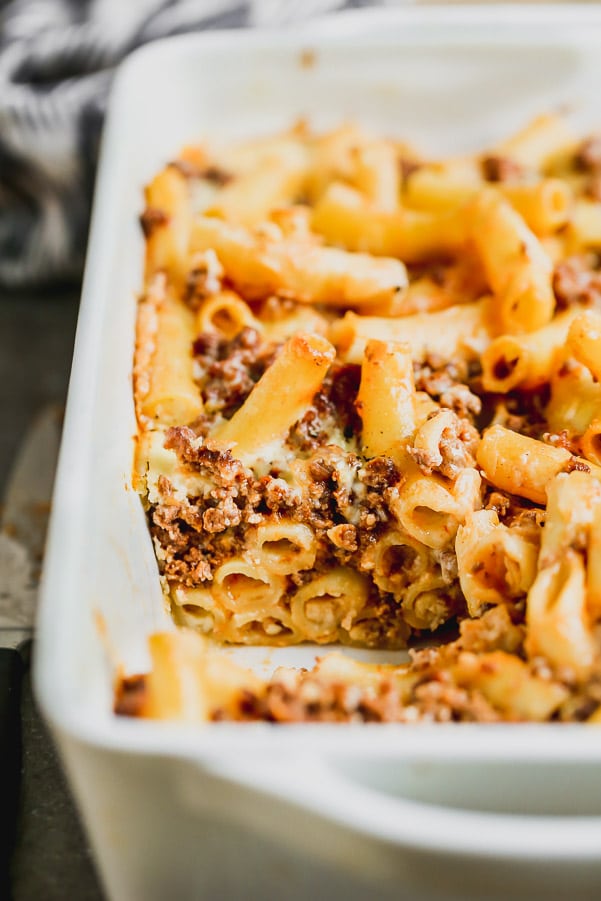 The Components of Pastitsio

I’m not going to lie to you, this Pastitsio recipe is not super simple. There are several different components you have to make, and while it’s not hard by any means, it just takes some time. And some dishes. If you’re looking for a simpler version of Pastitsio, you should check out our Skillet Pastitsio that takes a fraction of the time. It’s just as good, but it’s more of a creamy pasta than it is a sturdy lasagna.

For our classic pastitsio we have: A meat sauce, a béchamel sauce, and cooked pasta. Here’s what’s in each one.

Onion and garlic. Much like Italian cooking, this is the base of Greek cooking as well.

Ground beef. Because the ground beef is getting mixed with many other ingredients, I like to use something that’s pretty lean, mine was a 93% beef to fat ratio. Ground sirloin also works.

Tomato paste. While pastitsio does have a tomato essence, it’s not a tomato sauce. A little bit of tomato paste is all you need to coat the ground beef. I like to buy tomato paste in a tube, so I can use what I need, and keep the rest for a recipe down the road.

Cinnamon. Ground cinnamon is probably the most important addition in pastitsio that takes it from a traditional casserole to a Greek casserole. It adds a nice warmth and slightly sweet flavor I adore.

Salt. The general rule of thumb is one teaspoon of salt per pound of meat. We’re using about 1 1/2 pounds of ground beef, so we use 1 1/2 teaspoons of salt. 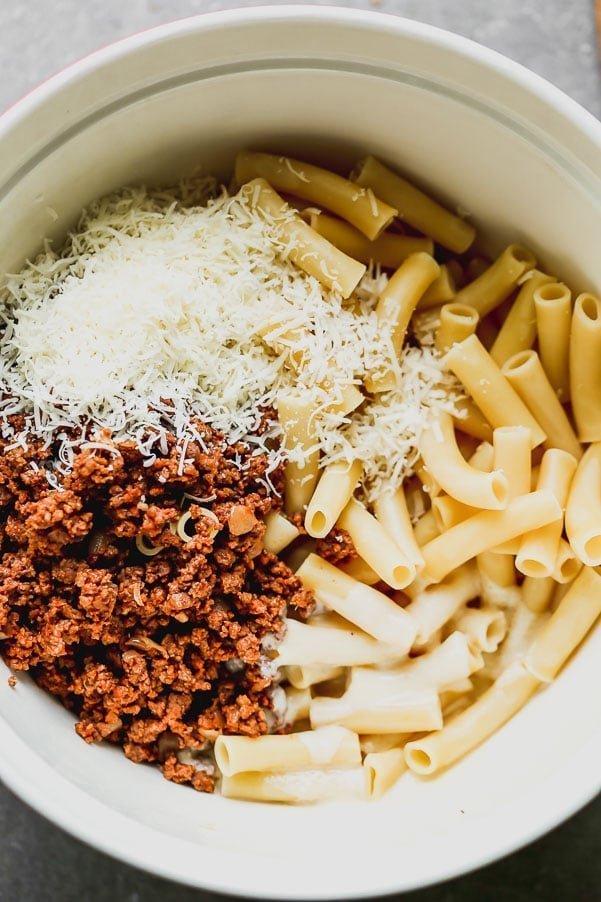 Butter and flour. If you’re not familiar, the combination of melted butter and flour is called a roux. It’s essential in thickening up the béchamel sauce, and while I do sometimes cut corners here to reduce the amount of fat, this time, I stayed true to the original ratio, which is almost equal parts butter to flour.

Nutmeg. Like the cinnamon, ground nutmeg adds just a hint of warmth to the béchamel sauce. A small amount is all you need, as a little bit goes a long way.

Eggs. Adding eggs to a béchamel sauce isn’t something you’d normally see, but pastitsio is meant to be a sturdy casserole, and eggs help to achieve that. It also, no shock here, adds a little bit more richness to the dish.

Romano cheese. In a true pastitsio, you would want to use Kefalotyri cheese, which is very similar to parmesan or Romano cheese. Since most people don’t have access to it, this recipe calls for grated Romano. Parmesan can also work in a pinch.

Pasta. Again, we’re straying from tradition a little bit here, because a classic pastitsio uses pastitsio noodles which are long tubular shaped pasta noodles, similar to bucatini, but larger. Usually I can order them on Amazon, but even they didn’t have them this time. My store was also out of bucatini, so I went with a simple ziti pasta. 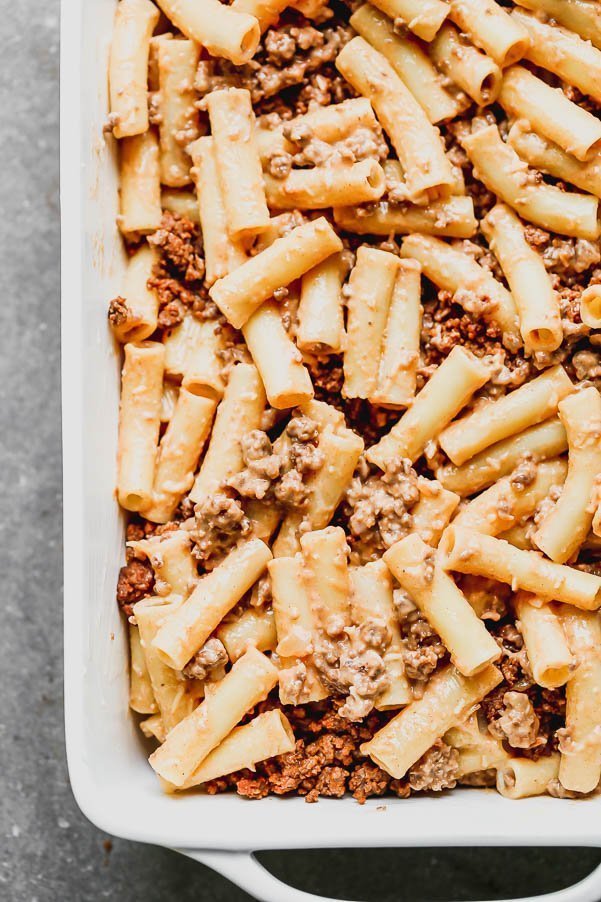 Add butter to a large pot. Turn the heat on medium. When the butter melts, whisk in the flour. Cook for one minute. Remove the pan from the heat and slowly whisk in HOT milk. It’s very important you don’t add cold milk to the hot butter and flour, as it will take longer to thicken up. Add warm or hot milk helps the béchamel to thicken up quickly and a little bit better.

Whisk in the salt and nutmeg. Bring to a boil and reduce to a simmer.  Simmer until thickened, it should take about 8 minutes. Once the sauce is thickened, remove from the heat and add the cheese. Season to taste with salt and pepper.

Once the béchamel sauce has cooled (after you make the meat sauce), slowly whisk in eggs.

Add the ground beef to a large non-stick skillet. Start to brown the meat, breaking it up as you go with a wooden spoon or spatula. When the meat is about halfway done cooking, add the onion, garlic, and salt. Continue to cook the meat and onion mixture until the ground beef is cooked through and the onions are soft.

Stir in the tomato paste and cinnamon. Continue to cook until the beef is evenly coated, remove from the heat.

Add the noodles to a large pot of salted, boiling water. Cook until they are UNDER aldente. Because the pastitsio cooks in the oven for a significant amount of time, it’s really important the noodles are undercooked before you bake them. 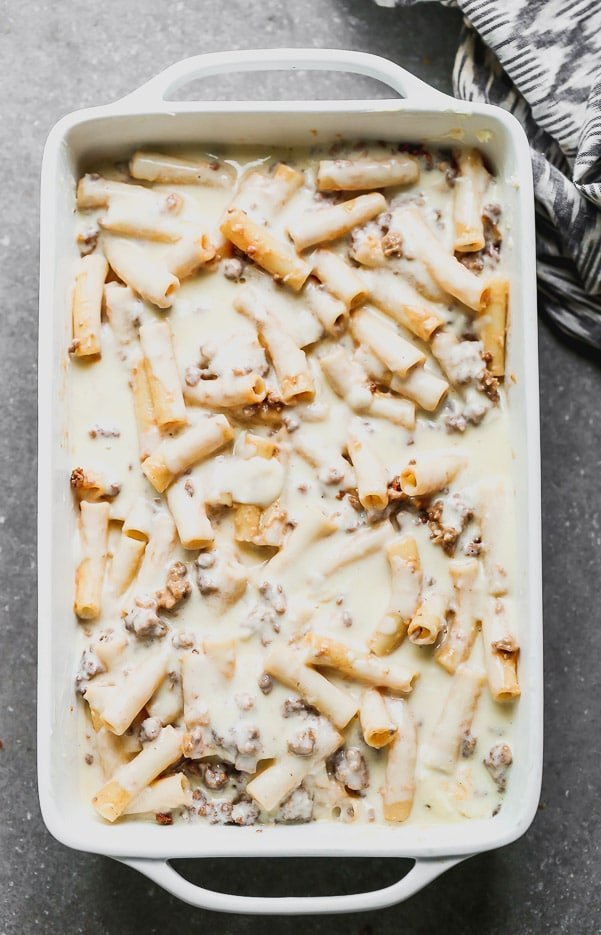 Add the noodles back to the pot you cooked them in. Add half of the béchamel sauce and half of the meat mixture. Stir to combine. Season the mixture to taste with salt and pepper.

Bake the pastitsio in the oven until the top is lightly golden brown and bubbly, about 30 minutes. 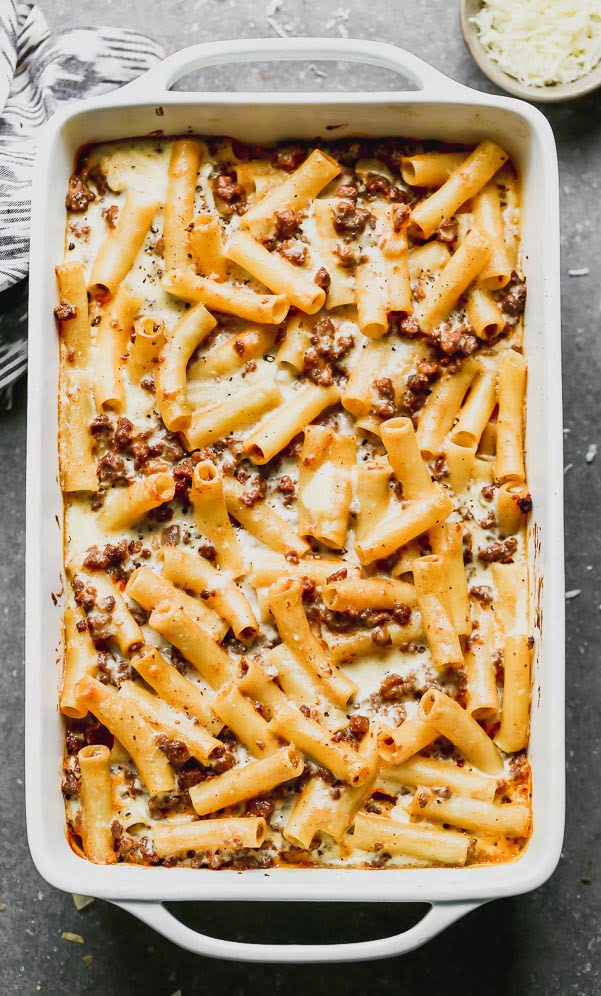 Can this pastitsio recipe be made in advance?

Yes! While I wouldn’t recommend baking it in advance, you can prep it advance. Cover with plastic wrap and store in the fridge until you’re ready to bake. Let it sit out at room temperature while the oven preheats.

Can I cut this recipe in half?

Yes! So this makes A LOT of pastitsio, I’d estimate it feeds at least six, maybe eight people. If you have a smaller family, you can easily half this recipe and bake it in a 8×8 or 9×9 baking dish. 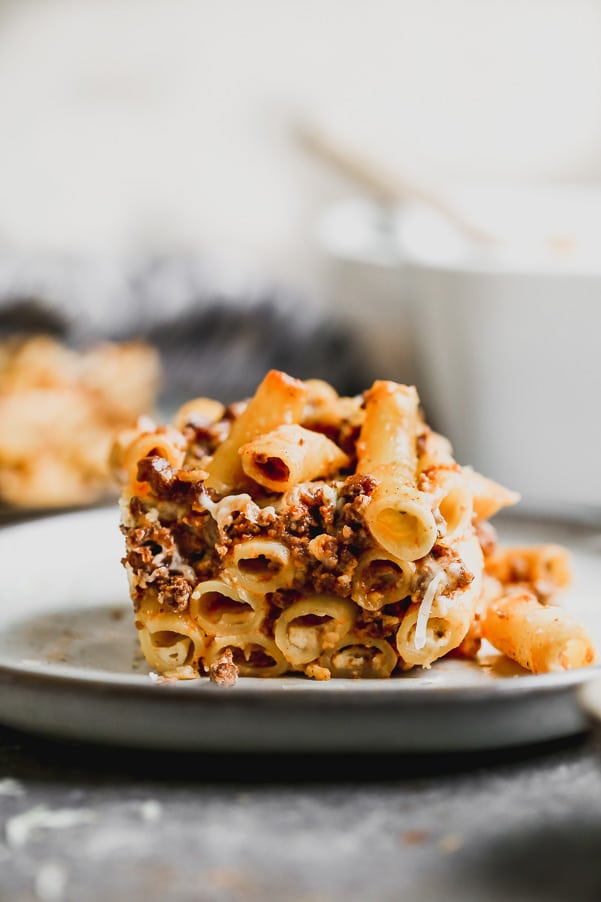 Print Rate Email
This Pastitsio Recipe (Greek Lasagna) is one of our favorite Greek casseroles! Aldente noodles are tossed with a creamy béchamel sauce and a tomato and cinnamon-laced ground beef mixture..  The noodles are then layered into a casserole dish in between more of the béchamel and meat sauce, baked until bubbly and brown, and then cute into squares. Rich and delicious!
Prevent your screen from going dark
8 people