END_OF_DOCUMENT_TOKEN_TO_BE_REPLACED

These Crispy Sweet Potato Latkes are the perfect side dish for Easter, or if they’re made with matzo meal, for Passover. These guys are sweet and soft on the inside, salty and crispy on the outside. If you have a sweeter palate, serve with sweetened yogurt, but if you’re into sweet and salty, serve with seasoned lemon Greek yogurt. Either way, you’ll keep coming back for more. 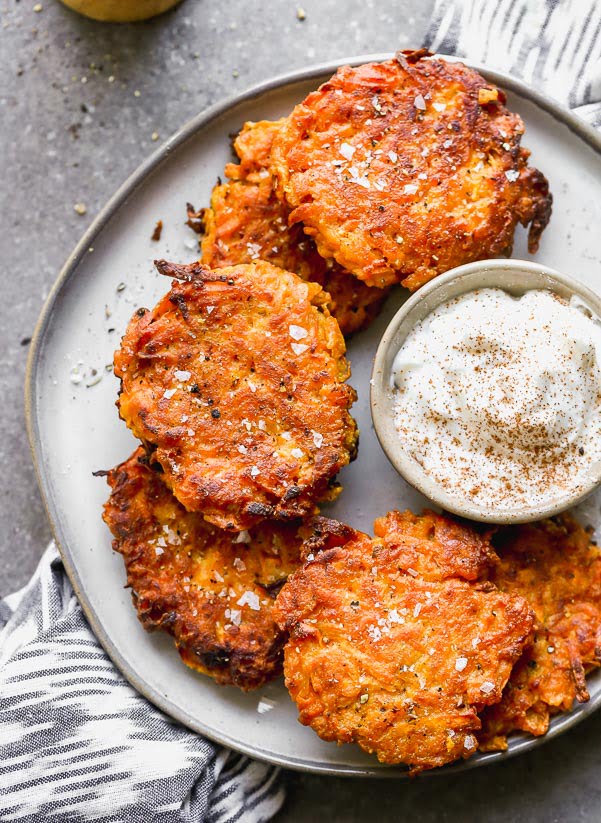 Sometimes I do this thing where I come home, and I’m so hungry I eat everything in sight – literally. Last night, I came home, and before I’d even taken off my jacket, I’d eaten two leftover artichokes , the remnants of this pasta, a hunk of leftover stinky cheese, and a few other things I want to block out.

And then I proceeded to make these sweet potato latkes, and the eating bonanza continued. Because when you have irresistibly crispy sweet potato edges that are salty, crunchy and all things wonderful paired with an almost creamy, starchy center, well, that’s not something I’m not willing to walk away from. 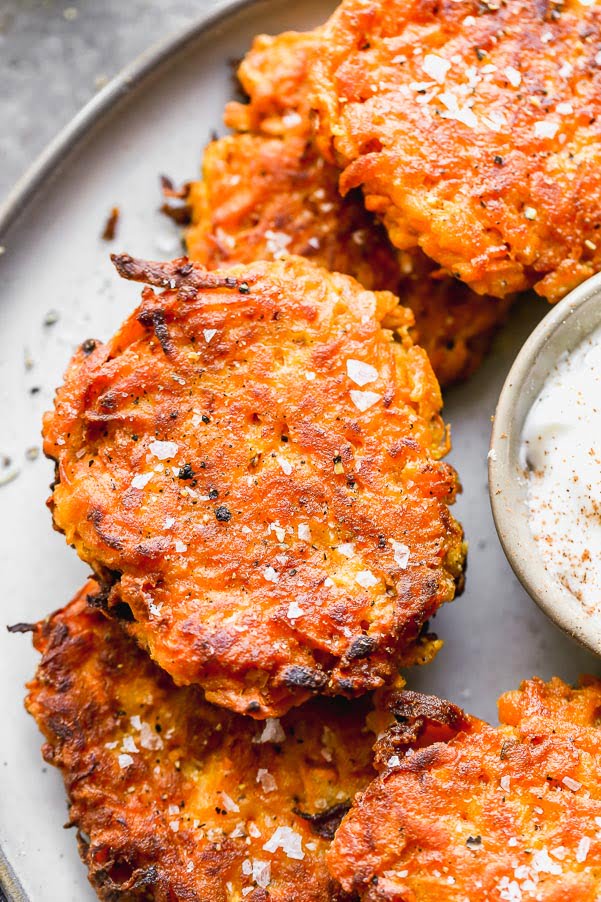 If you’ve never heard of a latke, they’re basically a potato pancake, but instead of composing of mashed potato, they’re made of shredded, most commonly, russet potatoes. They’re typically mixed together with onion and garlic, an egg for binding, and a starch of sorts to create the fritter formation.

The latkes are formed into haphazard patties, and pan-fried in just enough oil to make the edges crispy and brown.

The latkes origin was in a few of the Eastern European countries,  and was actually a food the underprivileged ate often because potatoes were so inexpensive. Of course, we also associate latkes with the Jewish religion and Hanukkah, and back in the 18th and 19th century when they were first introduced, they actually had cheese in them. These days, the ingredients are simpler and more straightforward, but you better believe I’m going to jump on that cheese latkes idea next time.

Of course, our version of a latke isn’t traditional. We swap out the russet potato for sweet potato, becoming a hybrid between a classic latke and a sweet potato pancake. You can go one of two ways when serving the sweet potato latkes – sticking with a sweet flavor profile or riding the line between salty and savory.

Oh, and if you’ve ever wondered what the latkes pronunciation is, here you go. Lot-kuhs. 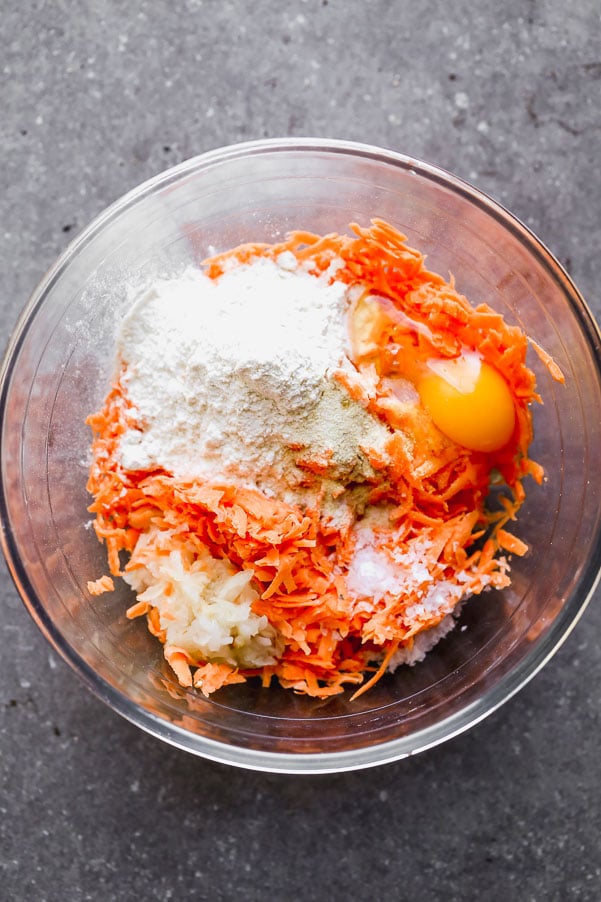 What are latkes made of?

Sweet potato. Sweet potatoes tend to retain quite a bit of moisture, so it’s hard for them to get as crisp as a russet or Yukon gold potato. Instead of shredding them and adding directly to the rest of the ingredients, put them in a thin dish towel and squeeze out all the excess moisture.  When we release that moisture, it allows them to crisp up perfectly.

Egg. We need one egg to bind everything together and keep them in a sweet potato cake form.

Flour. If you want to make these for Easter, a simple app, or just an average day, use regular all-purpose flour. If this is something you’re wanting to serve for passover, make sure to use matzo meal to keep them kosher. You should be able to switch the ingredients out seamlessly.

Garlic. Same thing with the garlic, grate it or chop it finely enough so it almost resembles a paste.

Olive oil. You could fry the sweet potato latkes in just about any fat (coconut oil would be lovely), but I like the flavor olive oil gives the latkes, and how beautifully it crisps them up. 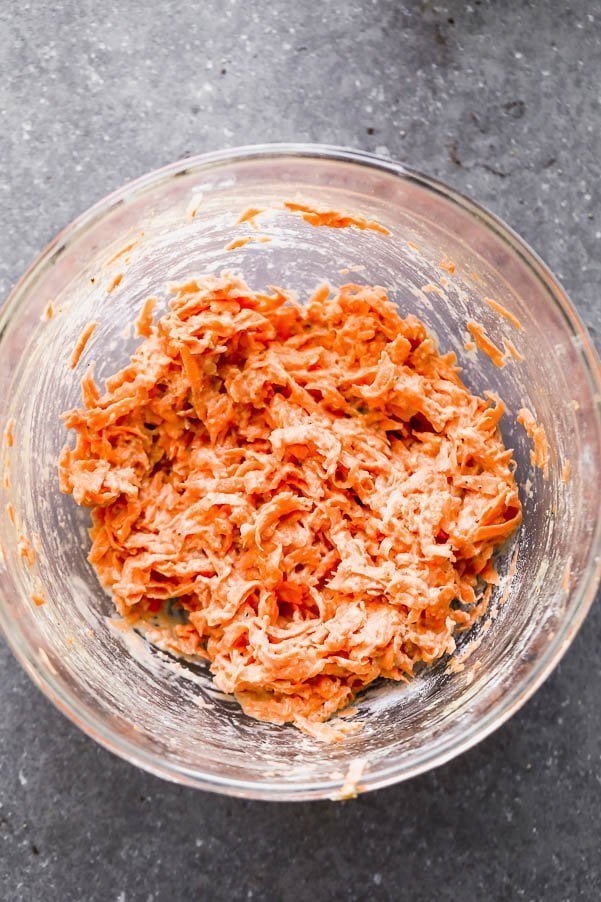 How to make Sweet Potato Latkes

Shred the potatoes. Use a the large side of a box grated to grate the potatoes. Transfer the potatoes to a thin dish towel and use those muscles to wring out all of the moisture you can.

Cook the sweet potato latkes. Use your hands to form the latkes into six large latkes or 10 small appetizer portions. I don’t like for them to put super compact, you want a few scraggly sweet potato strands to escape from the latke so they get super crispy on the edges.

Heat a large cast iron on non-stick skillet to a medium heat. Once the pan is hot, add olive oil. Test the oil to make sure it’s hot enough by pinching off a tiny piece of the latke, if it sizzles, it’s ready to go.

Add the latkes and cook until golden brown and crispy, about 4-5 minutes. Flip and do the same thing on the other side. Make sure to control the temperature at a medium heat, you don’t want them to brown too fast, otherwise the inside won’t cook through.

Remove and drain on paper towels. Serve immediately! I like to spoon a little bit of cinnamon-laced Greek yogurt on top, but applesauce, garlicky greek yogurt or even sour cream would be lovely. 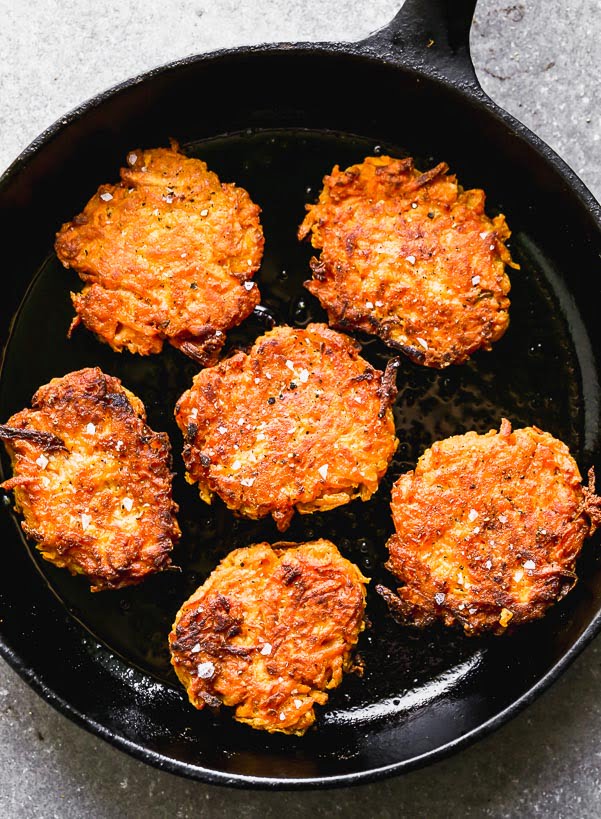 Can you make sweet potato latkes in advance?

You can prepare the sweet potato latkes in advance, but I wouldn’t cook them in advance any more than an hour or so ahead of time. They’re best served right away, but if you’re serving them within the hour, you can cook them, and place them on a cookie cooling rack on top of a sheet pan. About 5-8 minutes before you’re ready to serve, heat them up in a 375-degree oven until crisp and hot.

What to serve sweet potato latkes with

Print Rate Text Email
These Crispy Sweet Potato Latkes are the perfect side dish for Easter, or if they’re made with matzo meal, for Passover. These guys are sweet and soft on the inside, salty and crispy on the outside. If you have a sweeter palate, serve with sweetened yogurt, but if you’re into the sweet and salty aspect of things, serve seasoned lemon Greek yogurt. Either way, you’ll keep coming back for me.
Prevent your screen from going dark
6 latkes 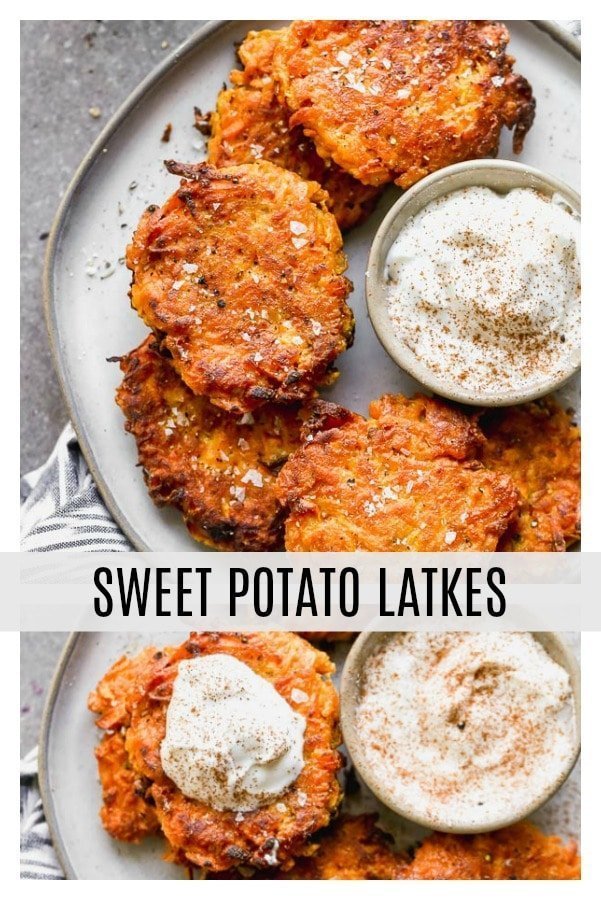